The study was carried out to evaluate the effect of seaweed extracts of Sargassum myricocystum (brown alga) and Gracilaria edulis (red alga) against the mycelial growth of Colletotrichum falcatum with different extraction methods of aqueous and ethanol at concentrations of 5 and 10% along with control by poison food technique. The result revealed that extract of S. myricocystum (ethanol extract) showed significant antifungal activity against pathogen followed by G. edulis. S. myricocystum (ethanol extract – 10%) extract recorded the lowest mycelial growth of 52 mm where as control recorded 90 mm.

Sugarcane (Saccharum sp.) is one of the most important cash crop grown in India which contributes to the tune of 7.5% of agricultural production of the country (Viswanathan, 2010). India is known as original home of sugarcane and sugar. In India, it is widely cultivated in 4 million hectares with an average productivity of about 76 tonnes ha-1 as the main source of sugars and bio ethanol (FAO, 2008). The sugar requirement in India for 2030 is estimated to be 36 million tonnes for which the sugar recovery is to be 11% and average cane yield is to be 100 t/ha which can be fulfilled either by increasing the acreage or productivity (Premachandran, 2012). Sugarcane is widely affected by biotic and abiotic factors, of which the loss to fungal pathogens is critical. Red rot caused by Colletotrichum falcatum Went (Perfect state: Glomerella tucumanensis (Speg.) von Arx and Muller) is the dreadful fungal disease which severely affects and reduces cane weight by 29%, loss in sugar recovery by 31%, sucrose content by 75% and juice yield by 90% (Hussnain and Afghan, 2006).
This dual loss of juice content and quality results in great losses for both cane grower and the sugar factories. Annual loss of revenues by C. falcatum infection in India is estimated to be between 500 and 1000 million USD (Viswanathan and Samiyappan, 2002) and it was responsible for the elimination of many elite sugarcane varieties (Siddique et al., 1983). Various chemical fungicides are most commonly used for the controlling of plant diseases. Application of seaweeds for the control of soil borne plant diseases has increased in recent years due to their environment friendly role. Macro algae are an attractive and natural source of bioactive molecules. Such natural products may have potential for the management of fungal diseases in sustainable agriculture such as organic farming. In recent years, there have been many reports of macro algae derived compounds that have a broad range of biological activities, such as antifungal, antibacterial, antiviral, antioxidant, anti-inflammatory, cytotoxic and antimitotic activities (Demirel et al., 2009). Marine bioactive substances extracted from seaweeds have been used for several decades to enhance plant growth and productivity (Rathore et al., 2009). Present investigation was undertaken to evaluate different seaweed extracts for their antifungal activity against C. falcatum.

Isolation of pathogen
The pathogen was isolated from the diseased tissues of infected sets by tissue segment method (Rangaswami, 1958). The infected portions were cut into small pieces using sterilized scalpel and were surface sterilized with 0.1% mercuric chloride for one minute and washed in three changes of sterile water. The surface sterilized tissues were placed on PDA in sterile Petri plates and incubated at room temperature (28 ± 2°C). The hyphal tips of fungi grown from the pieces were transferred aseptically to PDA slants for maintenance of the culture. The fungus was further purified by single spore isolation and maintained on PDA. The pathogen was identified based on morphological characters.
Collection and preparation of extracts
The marine alga Sargassum myricocystum (brown alga) and Gracilaria edulis (red alga) collected from Mandapam coast, Tamil Nadu were washed with seawater initially to remove macroscopic epiphytes and sand particles and then with fresh water to remove adhering salt.  The materials were shade dried for two weeks followed by oven drying at 40°C for 24 h and powdered.
Aqueous extract
About 20 g dried seaweed powder with 400 ml distilled water was autoclaved for 15 min at 100°C, 15 lbs then centrifuged at 10,000 rpm for 10 min. The supernatant was extracted and stored in a refrigerator till use.
Ethanol extract
Approximately 150 ml of alcohol was added to 20 g powder and kept for overnight with intermittent stirring and extracted through rotary evaporator at 40°C and 45 rpm. The liquid fertilizer was collected and stored in air tight container. Different concentrations were prepared by taking 5 and 10 ml of the stock preparation and mixing with distilled water to get 5 and 10% concentrations.
Antifungal activity
Poisoned food technique (Schmitz, 1930) was employed to screen the antifungal efficacy of seaweed extracts. Potato dextrose agar media amended with seaweed extracts (5 and 10%) was autoclaved and poured into sterile Petri plates. Fungal disc of 9 mm diameter were cut with the help of sterile cork borer from the periphery of 5 days old culture of C. falcatum and the disc were transferred aseptically on PDA plates poisoned with seaweed extracts. A plate only with PDA and fungal disc was considered as control and the diameter of growth of fungus in this plate was used as a control for the calculation of percent inhibition of test fungus.
Inhibition percentage
The inhibition percentage was calculated measuring the radial growth of the fungus grown on control and amended plates, using the following formula (Harlapur et al., 2007):
I% = 100 × (C – T) / C
Where, I% = inhibition percentage of pathogen growth, C = average radial growth in control plates and T = average radial growth in plates amended with seaweed extract.
Compatibility between antagonistic bacteria and seaweed extracts
King’s B medium was amended with the S. myricocystum (brown alga) and G. edulis (red alga) with 5 and 10% concentration. Then, the antagonistic bacterial isolates were inoculated in the poisoned media. The plates were incubated under room temperature and the growth of bacteria was recorded visually and scored either as highly compatible or moderately compatible or not compatible.
Compatibility between antagonistic fungi and seaweed extracts
PDA medium was amended with the S. myricocystum (brown alga) and G. edulis (red alga) with 5 and 10% concentrations. Then, the antagonistic fungi isolates were inoculated in the poisoned media. The plates were incubated under room temperature and the growth of fungi was observed.
Data analysis
The data from various experiments were analysed statistically adopting the procedure described by Panse and Sukhatme (1985). Wherever necessary, the percentage values were transformed to arc sine values before carrying out the statistical analysis.

Among the extracts tested, ethanol extract showed better performance for reducing the red rot pathogen growth in sugarcane. The percent reduction over control in ethanol extract was 33% where as in aqueous extract method 9%. Lowest mycelial growth (C. falcatum) was recorded in S. myricocystum at 10% (52 mm) (Figure 1), followed by Gracillaria edulis at 10% (57 mm) and Caulerpa racemosa at 10% (63 mm) in the ethanol extract compared to aqueous extract and other concentration (5%). Control recorded the highest mycelial growth of 90mm (Table 1). The effect of different concentrations of seaweed extracts was tested for their compatibility with fungal antagonist Trichoderma viride and bacterial antagonist Pseudomonas fluorescens under in vitro condition. The results revealed that the growth of T. viride and P. fluorescens was found to be not sensitive to the extracts of seaweeds S. myricocystum and G. edulis (Table 2). Jayaraj et al. (2008) found that the application of seaweed extracts on carrot plants reduced leaf blights caused by Alternaria and Botrytis as effectively as the fungicide chlorothalonil. In carrot application of seaweed liquid fertilizer (SLF) enhanced activities of defense  related enzymes including peroxidase, polyphenyl oxidase, phenylalanine ammonia-lyase, chitinase and β- 1,3- glucanase were significantly increased in plants treated with seaweed (Jayaraj et al., 2008; Solanki et al., 2012). Similar results were found in cucumber which showed enhanced activities of various defence-related enzymes including chitinase, B-1, 3-glucanase, peroxidase, polyphenol oxidase, phenylalanine ammonia lyase, and lipoxygenase due to SLF application (Jayaraman et al., 2011). The commercial extract from the brown seaweed Ascophyllum nodosum was found to reduce fungal diseases in cucumber (Jayaraman et al., 2011). The laminarin polysaccharide isolated from Laminaria digitata is able to elicit host defense responses in plants (Klarzynski et al., 2000). The brown seaweeds show high antifungal activity as compared to red and green alga. The brown seaweeds contain high amount of flavonoid and phenolic compounds which could be the reason for antifungal activity (Cowan et al., 1999). Lipophilic compounds (glycolipid, phenolic-terpenoids, unsaturated-fatty acids and hydroxylated unsaturated-fatty acids) are highly soluble in ethanol compared to water. These lipophilic compounds are having antifungal property (Hanaa et al., 2008). In another study, the authors (Tuney et al., 2006) found that ethanolic extract of Padina pavonica was active against C. albicans, however methanolic and acetonic extracts of the same algae were inactive against C. albicans. 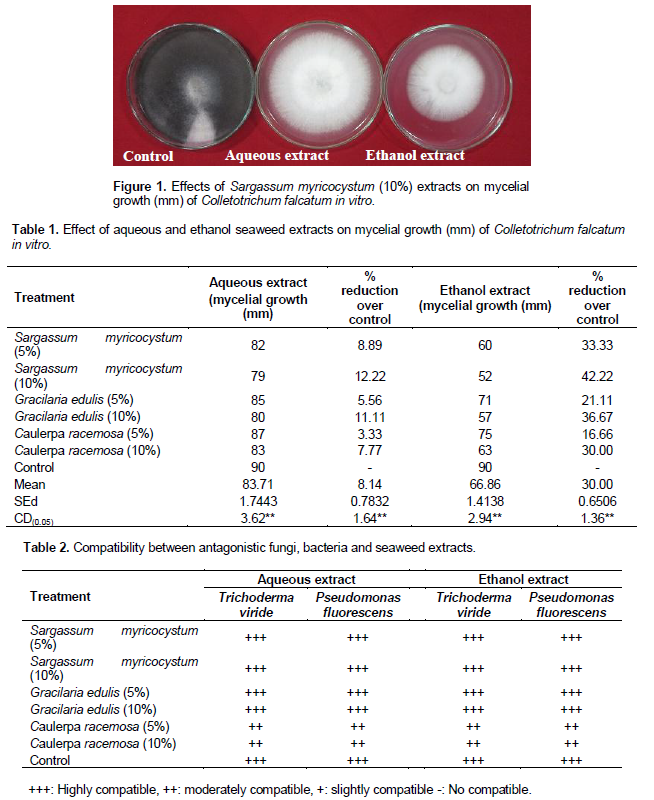 Ethanol extracts of S. myricocystum at 10% concentration effectively controlled and inhibited the mycelial growth of C. falcatum in sugarcane under in vitro studies.