Finger millet (Eleusine coracana (L.) Gaertn), believed to be adapted to the arid and semi-arid regions of the world, is highly tolerant to pests, diseases and drought (Gowda et al., 2015). It serves as a food and nutritional security crop because of its adaptability to a wide range of environments, high nutritional value, excellent  storage qualities and its importance as a low input crop (Dida et al., 2007). It is cultivated on more than 31 million ha of land globally (FAO, 2014).

The experiment was conducted on three locations for two years, 2013 and 2014. The locations were Sirinka, Kobo and Jari, which represent the finger millet growing areas of North Eastern Ethiopia (Table 1).

Eight finger millet varieties were included in the study and a local (farmers’) variety was also added for comparison. The eight varieties were released in Ethiopia by three different agricultural research centers (ARCs). Varieties Necho and Degu were released by Adet ARC in 2011 and 2005, respectively; Bareda and Gute in 2009, Wama and Boneya in 2007 and 2002, respectively, by Bako ARC; Padet and Tadesse in 1999 by Melkassa ARC. The experiment was laid out in a randomized complete block (RCB) design with three replicates. A plot size of 5 rows × 40 cm × 5 m was used, and a space of 1 m between plots and 0.5 m between blocks was also left. Seeding rate was 20 kg/ha. Nitrogen and

phosphorus fertilizers, as Urea and DAP, were applied at the rate of 50 kg/ha urea and 100 kg/ha DAP. Weeding was applied as the case may be, uniformly to all the plots. Data were collected both on plant and plot basis for phenological, yield and agronomic traits.

In 2013, data were recorded from the three locations. In 2014, however, data were recorded from Jari and Sirinka only, as the experiment at Kobo was failed due to deficit moisture stress and grass hopper attack. Additive Main-effect and Multiplicative Interaction (AMMI) analysis was done based on Zobel et al. (1988); genotype and genotype by environment interaction (GGE) analysis was done as per Yan et al. (2000). Analysis of variance, AMMI and GGE analyses were carried out by suing GenStat (16th edition) software.

The results of the combined analyses of variance across locations for 2013 and 2014 are depicted on Tables 2 and 3. The year 2013 was relatively better than 2014 for finger millet yield, as evidenced by higher yield in 2014. In 2013, the location effect was significant (P≤0.01) for all the traits considered. However, genotypes (varieties) and G × L  interaction  term  differed  significantly  for  days to heading and maturity, and grain yield. In that same year, varieties Degu and Necho were late to flower and to mature; however, the rest were comparatively early to flower and to mature. Bareda, the local variety and Tadesse were the high-yielding varieties (Table 2). 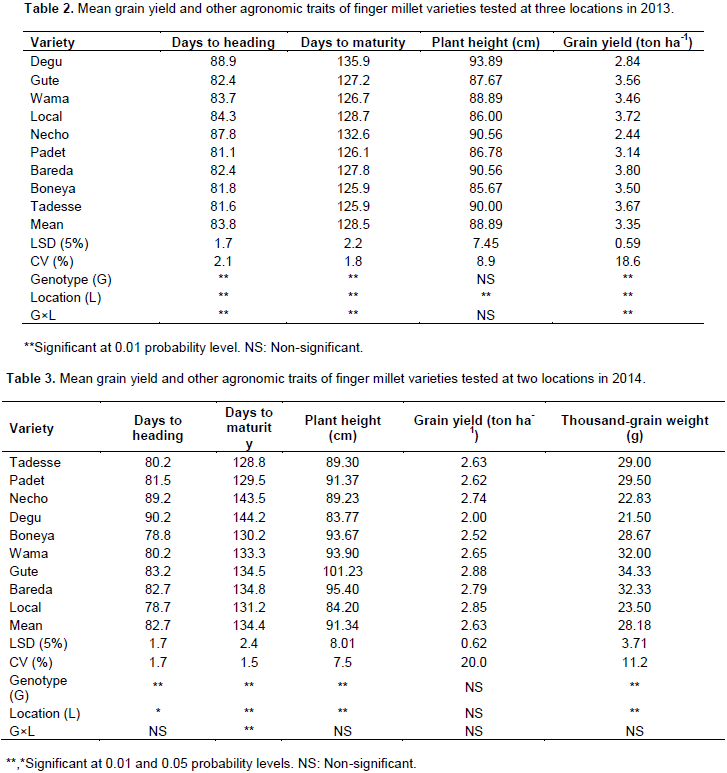 In the year 2014, varieties differed significantly (P≤0.01) for days to heading and maturity, plant height and 1000-grain weight. Similarly, the location effect was significantly different for all the traits considered except grain-yield. The G × L interaction term was significant only for days to maturity. Like  the  year  2013, Degu  and Necho were late to flower and to mature in 2014 also. Gute was the tallest variety. As evidenced by higher 1000-seed weight, varieties Gute, Bareda and Wama were bold-seeded varieties as compared to the others (Table 3). 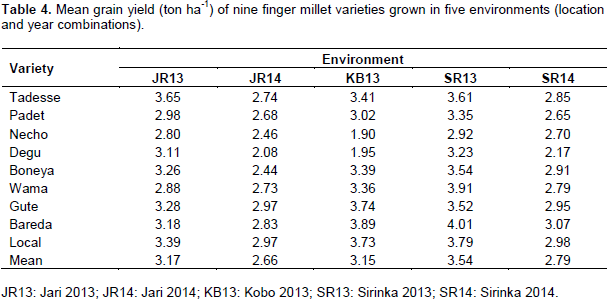 The AMMI model combines AOV with additive parameters and PCA with multiplicative parameters into a single analysis (Gauch and Zobel, 1997). The AMMI and GGE analyses were based on five environments. The AMMI analysis demonstrated that genotype, environment, and G × E were significant (P≤0.01). Genotype, environment, and G × E explained 23.16, 36.71 and 40.12% of the total treatment variation (Table 5). Fentie et al. (2013) demonstrated 59.64, 9.61 and 30.75% of the total variation in finger millet grain yield to be accounted for by environment, genotype and G × E, respectively. In a mixed and colored sets of finger millet types, Adugna et al. (2011) reported 2.5, 79.1 and 18.3% of the total sum of squares in the mixed set and 2.1, 86.9 and 11.0% in the colored set to be attributed to genotype, environment, and G × E interaction effects, respectively. In  a  study  of 15 finger millet genotypes under three environmental conditions, Misra et al. (2009) explained 7.88, 79.69 and 13.43% of the treatment variation in yield by genotype, environment and G × E, respectively. From the sources of variation of treatments, the genotype and interaction sources affect genotype rankings within environment and hence are relevant for targeting genotypes; these relevant effects account for 10 to 40% of the treatment variation (Gauch and Zobel, 1997). In the study, the treatment sum of squares (SS) was 57.12. However, the relevant portion of this SS was only 36.15 (genotype SS + interaction SS) or 63.29% of the treatment SS (Table 5).

According to Gauch and Zobel (1997), in addition to the environmental effect, errors from uncontrolled variation within experiments are also irrelevant and should be removed from the interaction. Accordingly, from the interaction SS, 9.184 (the product of 32 and 0.287) was the real structure SS. As a result, the relevant variation was only 26.97 (13.23+13.74) or 47.21 % of the treatment SS, the rest would be irrelevant environment effect and interaction noise.

In the biplot system, main effects (both genotypes and environments) and IPCA1 (interaction) are used as abscissa and ordinates (Zobel et al., 1988; Gauch, 1992). The AMMI biplot showing the main and IPCA1 effects of both genotypes and environments  on  finger  millet  grain yield is as shown in Figure 1. As shown in Figure 1, distances along the abscissa show main effect differences, whereas the ordinate shows differences in interaction. In the present study, the AMMI1 biplot showed that genotypes Bareda, Local check and Gute had higher grain yield in that order; however, genotypes Padet, Necho and Degu had below average grain yield. The IPCA scores of genotypes in the AMMI analysis indicate the stability or adaptation over environments (Gauch and Zobel, 1996). 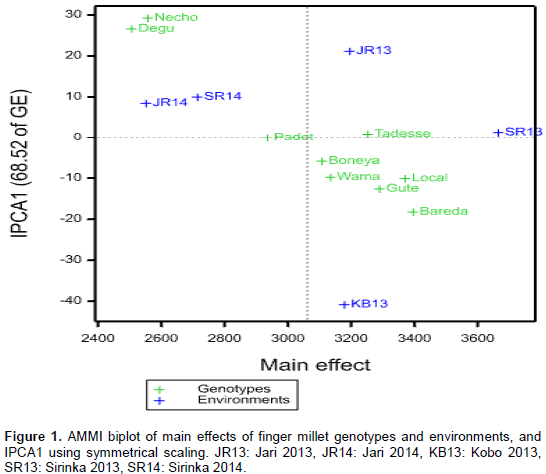 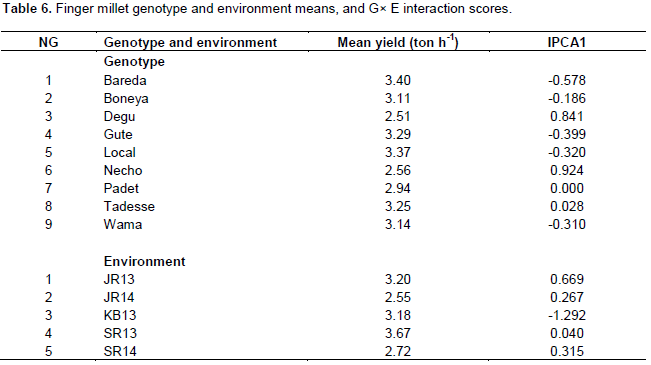 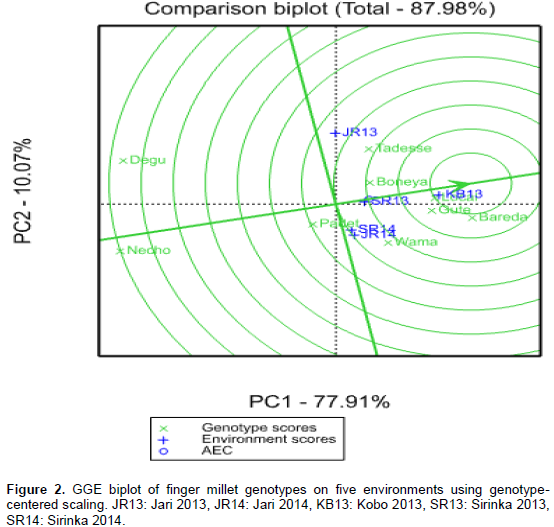 Necho has the only advantage of being white as farmers in some areas prefer white seeded varieties to brown seeded types for injera making (Assefa et al., 2009). Varieties Necho and Degu were neither stable nor high-yielding. In line with this, Vadivoo et al. (1998) reported that the yield potential of white grained types is generally lower than the brown ones. Besides, as these two varieties are late maturing, they could not fit in the moisture deficit areas like Kobo, Sirinka and Jari.

Based on the overall performance and adaptability of the nine finger millet verities over the five environments, as evidenced by AMMI and GGE analyses, the bold-seeded variety, Bareda could be recommended for production at Sirinka and Kobo, whereas the local check could still be used at Jari.