The aim of this study was to evaluate the effect of indigenous yeasts on the aroma of  fermented Chenin Blanc grape must by determining the volatile compounds, the odor activity value (OAV) and carrying out sensory analyses. The must, fermented by Hanseniaspora opuntiae/Saccharomyces cerevisiae combinations, presented higher concentrations of compounds such as ethyl acetate, ethyl hexanoate, 2-methyl-1-propanol and 2-phenylethanol, and a lower production of acids and acetaldehyde. This fermented must presented higher OAV values for compounds such as 2-methyl-1-propanol and ethyl acetate, 687.06 and 1264.16, respectively. 2-phenylethanol was produced by H. opuntiae and Hanseniaspora guilliermondii in combination with S. cerevisiae in amounts that resulted in OAV values of 5.63 and 4.62, respectively. In appropriate concentrations, these volatile compounds contribute positively to the aromatic quality of the fermented must. The highest mean acceptability and purchasing intention scores were obtained by the must fermented by H. opuntiae/S. cerevisiae. In the must fermented by H. guilliermondii/ S. cerevisiae, the absence of ethyl hexanoate and high concentrations of octanoic acid and acetaldehyde probably contributed to its low acceptability. Thus, it was suggested that the yeast genus Hanseniaspora in combination with S. cerevisiae, showed the potential to positively impact the wine aroma.

Grape juice in natural or spontaneous alcoholic fermentation, is  routinely  dominated  by  strains  of   the yeast Saccharomyces cerevisiae, but non-Saccharomyces yeasts such as Candida, Hanseniaspora,  Pichia, Torulaspora, Hansenula, Issatchenkia, Metschnikowia, Kluyveromyces and Zygosaccharomyces initiate the process (Fleet, 2003; González et al., 2006; Lopandic et al., 2008). Non-Saccharomyces yeasts develop in the early stages, but do not survive to the end of fermentation. Nevertheless, they produce sufficient biomass to impact the chemical composition of the wine, and the contribution of these yeasts to the overall wine character is important (Swiegers and Pretorius, 2005).
Some studies have suggested that different yeasts (Torrens et al., 2008; King et al., 2011; Robinson et al., 2011) due to their genetic differences (Bisson and Karpel, 2010) can influence the volatile composition, and consequently the aroma and type of the wine. For example, some Hanseniaspora/Kloeckera species may produce more appealing mixtures of flavor volatiles than Saccharomyces species (Mendoza et al., 2009; Moreira et al., 2008; Assis et al., 2014), Hanseniaspora osmophila produces more 2-phenylethyl acetate than a pure culture of S. cerevisiae (Viana et al., 2009). Thus carrying out wine fermentations by co-inoculating with mixtures of different starter cultures, is a strategy which could harness the unique activity of such yeasts (Fleet, 2008).
The influence of the volatile compounds on the final aroma depends on their concentration in the wine, and on the perception threshold of the specific compound. A volatile compound contributes to the aroma when its concentration in the wine is above the perception threshold, therefore odorants with odor activity value (OAV) > 1 can be perceived (Guth, 1997; Jiang and Zhang, 2010; Juan et al., 2012; Welke et al., 2014). Capone et al. (2013) identified 51 volatile compounds in Negroamaro red wines, and of these, only 18 components were perceived as active odorants (OAV > 1).
A combination of analytical and sensory methodologies has been particularly important in resolving the effects of interactions between aroma com­pounds and the nonvolatile matrix, as well as with other volatile compounds (Mamede et al., 2005; Pineau et al., 2009; Aleixandre-Tudo et al., 2015). According to Robinson et al. (2014) these interactions may result in variations in the sensory character of the mixture, due to perceptual enhancement and suppression effects as well as to physicochemical effects on the volatility and release of aroma compounds.
The São Francisco Valley is the second most important wine production region in Brazil. This region stands out for the volume of grapes produced and the geochemical characteristics that favor the production of white wine and sparkling wine. Wine making demands innovation, so the aim of this study was to investigate the contribution of using a combined inoculation of indigenous non-Saccharomyces yeasts (Hanseniaspora opuntiae, Hanseniaspora guilliermondii, Issatchenkia terricola and Cryptococcus flavescens), obtained from the natural ecosystem in the “São Francisco Valley region”, together with the commercial Saccharomyces cerevisiae var. bayanus, on the aroma of the fermented Chenin Blanc grape must. The results are discussed based on the data obtained in the quantification of the volatile compounds/OAV and a sensory analysis.

Physicochemical characterization of the grape must and fermented grape musts
The Chenin Blanc grape must presented concentrations of SO2, N2, pH value, titratable acidity and °Brix of 60.0 mg L-1, 150 mg L-1, 3.1, 71.64 mEq L-1 (5,4 g L-1) and 19.8, respectively. According to Ribéreua-Gayon et al. (2006) the Chenin Blanc grape must was in appropriate conditions to start fermentation.
The ethanol content of the fermented musts reached an average of 11.53% for S. cerevisiae, 10.56% for the yeast combination of H. opuntiae/S. cerevisiae, 7.30% for H. guilliermondii/S. cerevisiae, 8.53% for I. terricola/S. cerevisiae and 8.04% for C. flavescens/S. cerevisiae. No ethanol was produced in the grape musts fermented by the non-Saccharomyces yeast cultures (Table 1). The sugar consumed may have been used in a different metabolic routes giving rise to volatile compounds such as alcohols and acetaldehyde. In mixed culture fermentations, Moreira et al. (2008) observed antagonistic competition between the inoculated microorganisms, making the production of ethanol less efficient. 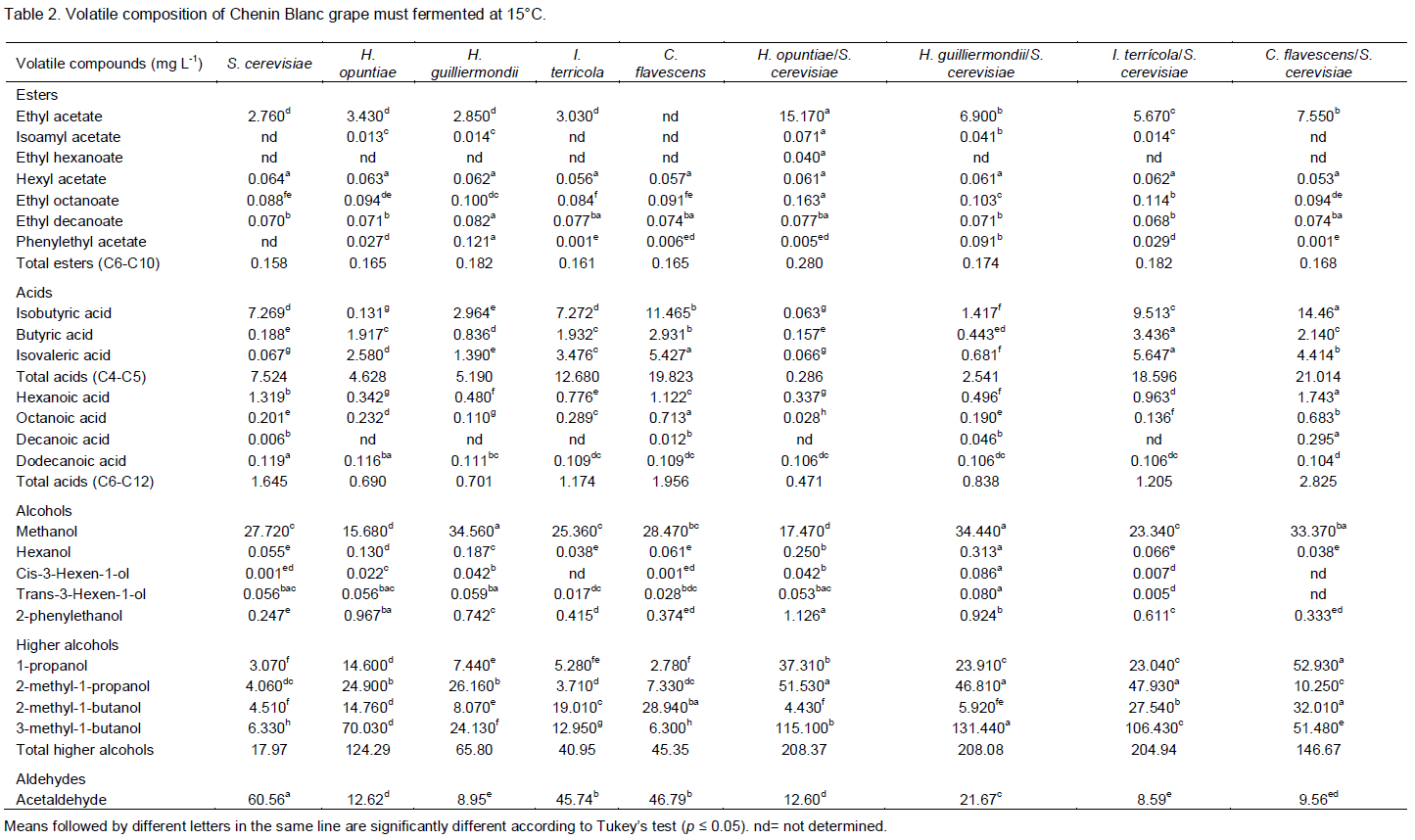 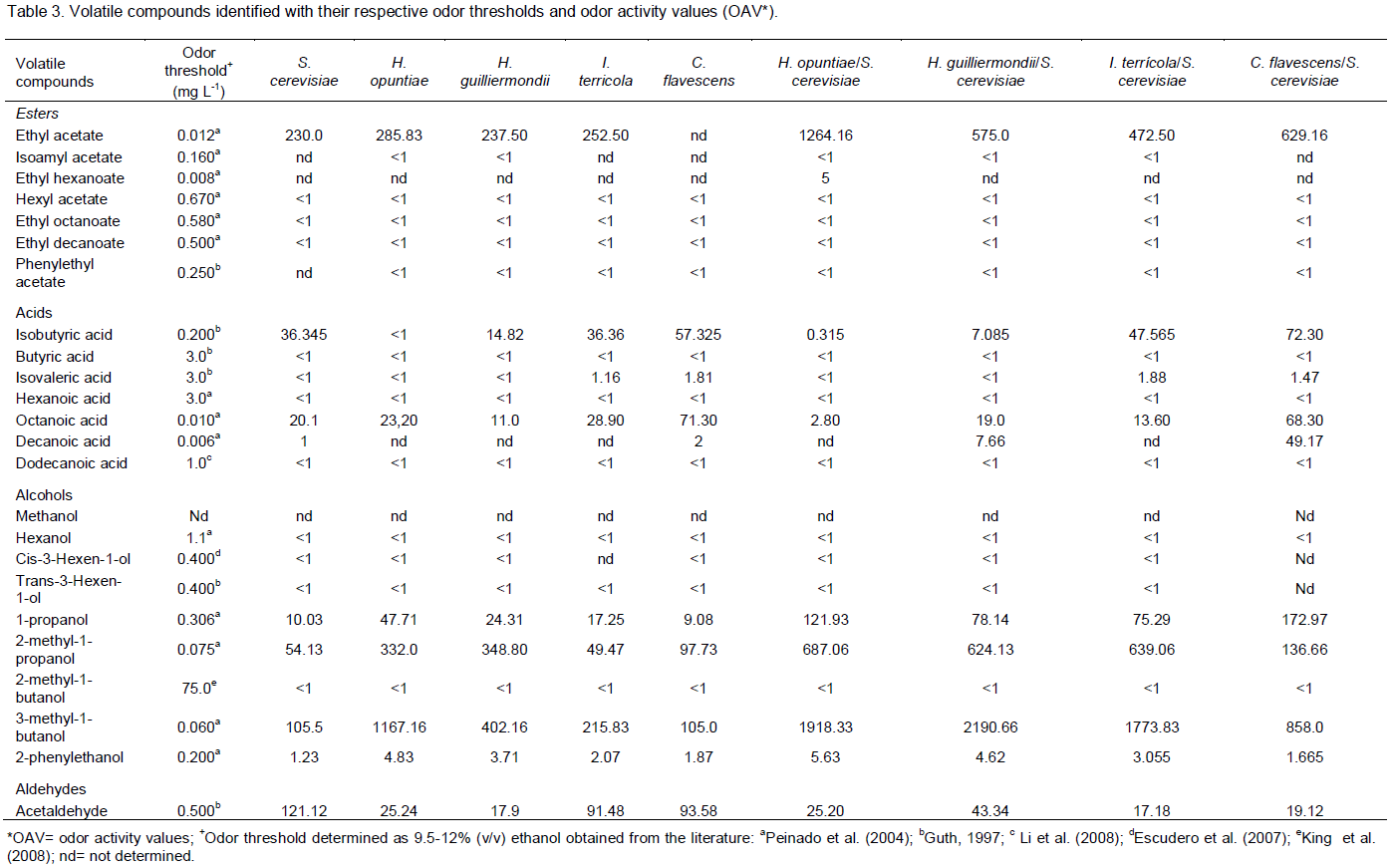 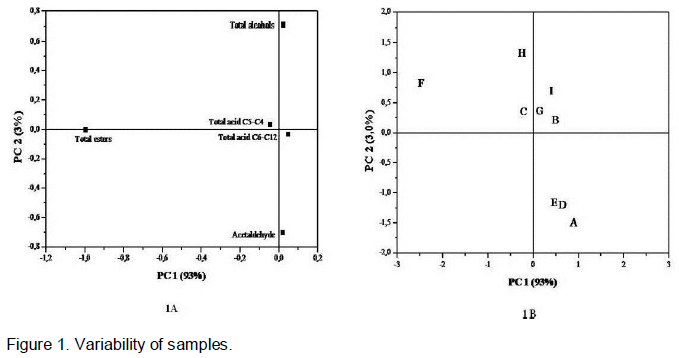 The combined use of non-Saccharomyces yeasts with Saccharomyces cerevisiae var. bayanus in the fermentation of grape musts showed that not all the combinations resulted in good production of volatiles with a consequent positive contribution to the aroma, with the exception of H. opuntiae and H. guilliermondii. The must fermented by H. opuntiae/Saccharomyces cerevisiae showed greater acceptability and purchasing intention, probably due to the production of volatile compounds in amounts sufficient to positively enhance the wine aroma, highlighting total esters (ethyl acetate, ethyl hexanoate), total alcohols and 2-phenylethanol.
The low acceptability of the must fermented by C. flavescens/S. cerevisiae could have been due to increments of undesirable components that contributed negatively to the wine aroma. It was therefore suggested that the yeast species H. opuntiae and H. guilliermondii in combination with Saccharomyces cerevisiae showed potential to positively impact the wine aroma. A more comprehensive survey of the use of non-Saccharomyces yeasts in wine production is feasible, considering their contribution to the aroma, seeking innovations in winemaking and in the types of wine.

The authors are grateful to Vinibrasil S/A for their assistance and for donating the Chenin Blanc grape must. This study was financially supported by fellowships received from FAPESB and CNPq.