Camu-camu (Myrciaria dubia) H.B.K.) Mc Vaugh) is a shrub native to the Amazon region and its fruits are promising sources of various bioactive compounds such as vitamin C, phenolic compounds and carotenoids. Camu-camu fruit is considered the greatest natural source of vitamin C worldwide and also good source of dietary fiber, potassium, iron, calcium, and various kinds of amino acids such as serine, valine and leucine. Therefore, the presence of different bioactive compounds in camu-camu fruits could be used to retard or prevent various chronic non-communicable diseases such as dyslipidemia, obesity, cardiovascular and cancer. The objective of this study was to analyze pulp green and ripe camu-camu to see differences in its attributes vs.  maturation stage. Ripe camu-camu pulp had a great antioxidant capacity, 2671 μmol TE/g and unripe 2563 μmol TE/g fresh weight. It is also very rich in vitamin C (1230 mg/100 g in unripe, and 1150 mg/100 g in ripened fruits), calcium (13.2 mg/100 g to ripe and 12.1 mg/100 g to unripe fresh weight), dietary fiber (2.50 g/100 g to unripe and 2.40 mg/100 g to ripe). Camu-camu is also an excellent source of other bioactive compounds, such as minerals and different phenolic compounds. In conclusion, camu-camu fruit can be used to introduce bioactive compounds into food products and to delay or prevent many human diseases.

Camu-camu (Myrciaria dubia (H.B.K.) McVaugh) is an exotic tropical fruit native to the Amazon region and it is one of the few Amazon fruits that have been explored for commercial purposes. The camu-camu fruit belongs to the group of the so-called super fruits and it is known by its outstanding content of ascorbic acid and health-relevant flavonoids (Borges et al., 2014; Akter et al., 2011). Fruits are essential for good health. Consumption of fruits has been increased because of their high content of bioactive compounds. The most common bioactive compounds are vitamin C, polyphenols, β-carotene and lycopene. In recent years, there has been a global trend toward the use of natural phytochemicals as antioxidants and functional ingredients, which are present in natural resources such as vegetables, fruits, oil seeds and herbs (Kaur and Kapoor, 2001;  Aguiar and Souza, 2014).  Natural antioxidants from plant extracts have attracted considerable attention due to their safety.

Polyphenol compounds such as anthocyanins, flavonoids and phenolic acids are responsible to reduce oxidative stress (Inoue et al., 2008; Liu et al., 2008). Because of its natural acidity, the camu-camu fruit is mainly consumed after processed into juices, concentrates, and for the production of vitamin C capsules. As a result, great volumes of residue, consisting of seeds, peels and residual pulp that represent around 40% of the fruit in weight, are generated (Rodrigues et al., 2001). Despite this, while several studies have focused in investigating the properties of camu-camu pulp (Gonçalves et al., 2014; Fujita et al., 2013), the bioactive potential and biological effects of the residue remain understudied (Azevêdo et al., 2013). Camu-camu fruits are rich in polyphenols which could be used to retard or prevent various human diseases. However, there are few evidence in in vivo studies on the polyphenol of camu-camu fruits. Camu-camu (Myrciaria dubia) H.B.K.) Mc Vaughis, a member of the Myrtaceae family is native to the Amazon region. Camu-camu is an important source of nutritional antioxidants, vitamins C, β-carotene, and phenolic compounds (Chirinos et al., 2010). Camu-camu fruits are considered the richest natural source of vitamin C worldwide (Aguiar and Souza, 2015). Bioactive compounds in camu-camu fruits are not only responsible of vitamin C but also responsible of other compounds such as phenolic compounds and β-carotene contents (Chirinos et al., 2010). Camu-camu fruits are also good source of potassium, iron, calcium and phosphorous and various kinds of amino acids such as serine, valine and leucine (Aguiar and Souza, 2014). Japan and the European Union are the main export markets for products such as cellulose, extract and juice. Camu pulps are used as ice cream and puree. Camu whole fruit and slices can be used to make dried products. It appears that the fruits are promising sources of bioactive compounds that  could be used as functional food not only in the Amazon, but also throughout the world. Therefore, the objective of this study is to provide information of the chemical composition and phytochemicals in promoting health, especially vitamin C, polyphenols and β-carotene in the fruit at two maturity stages, of the camu-camu.

The study camu-camu was collected manually during the ripening stage in Rio Branco, Roraima (RR), in a region called Santa Izabel de Boiaçú, municipality of Rorainópolis, RR, with the following geographic coordinates: 0°23'27.3"S to 61°48'22.5"W. The fruits were placed in sterile plastic bags and transported to the Physical and Chemical Food Laboratory (LFQA) of the Society, Environment, and Health Coordination (CSAS) of the National Research Institute of Amazônia (INPA).
The shape of the camu-camu fruits is round (Figure 1) and the diameter and length are 1.0 to 3.2 cm and 1.2 to 2.5 cm, respectively. All camu-camu samples were homogenized in a blender before the physical and chemical analyses, to quantify fiber, protein, cholesterol, sugar, moisture, ash, polyphenols, minerals, fatty acids, lipids, some vitamins, and antioxidants. The moisture, ash, protein, lipid and cholesterol, contents of the camu-camu were analyzed three replicates as recommended by AOAC (2005) and sugar also three replicates as recommended by Mason and Slover (1971). Soluble and insoluble fiber contents were determined by the method proposed by Asp et al. (1983). Vitamin C, carotenes content was measured three times by high-performance liquid chromatography (HPLC) following the method proposed by AOAC (2005). Calcium, sodium, potassium, magnesium, manganese, iron, zinc, and copper contents were determined by digesting the sample (CEM Coorporation, model MD-2591) and reading the solution with an atomic absorption spectrometer (Variam Spectra AA, model 220 FS). Antioxidant capacity was determined as recommended by Brand-Williams et al. (1995) using 2,2-dyphenyl-picrylhydrazil (DPPH). Ten grams were extracted with 100 ml of 60% ethanol under constant stirring at 30°C for 24 h. The extracts were filtered by filter paper number one and the fluid portions were analyzed for antioxidant activity. 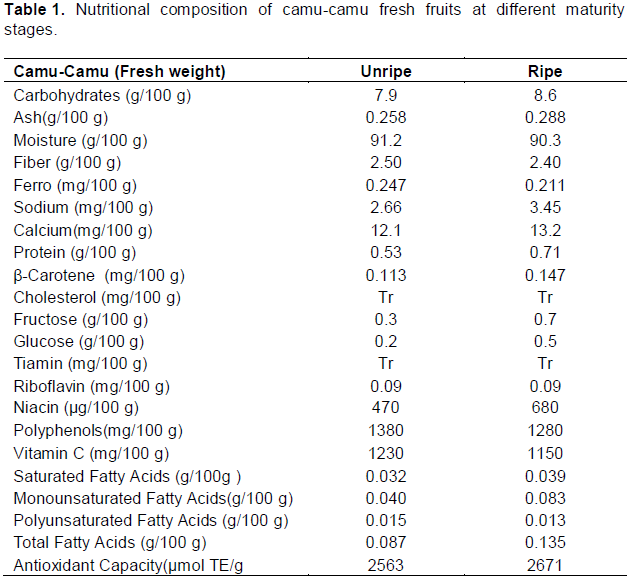 The absorbance was read three times at 515 nm, and the antioxidant capacity was calculated as μmol of Trolox equivalents (TE) per gram fresh weight.

The contents  antioxidante capacity in camu-camu fruit at two maturity stages are presented in Table 1 and extremely high antioxidant activity, 2671 μmol TE/g for ripe and 2563 for unripe. The ripening process is a critical variable in camu-camu bioactive properties, especially with respect to its reduction potential. These results agree with the antioxidant activity measured during ripening. The antioxidant potential may be related to the phenolic composition of the extracts, but other components may also make an important contribution. Camu-camu fruits are considered the richest natural source of vitamin C in Brazil (Justi et al., 2000). Due to their high level of this vitamin, the Camu-camu derivatives such as pulp, extract and juice are extensively exported to Japan and European Union markets (Akter et al., 2011 and Chirinos et al., 2010). The content of vitamin C is 20 times higher than Acerola and 100 times greater than lemon (Vidigal et al, 2011). Due to it high nutritional value, the Amazon Research National Institute (INPA) introduced the seed of Camu-camu in  the  interior of Brazil, in Minas Gerais, São Paulo and Paraná states (Yuyama, 2011). Nevertheless, Justi et al. (2000) observed that the fruit grown in Paraná presented lower content of vitamin C (1400 mg/100 g in the pulp) than the one from the Amazon region (2400 to 3000 mg/100 g in the pulp). This suggests that different conditions influencing the development of this plant might modulate the levels of bioactive compounds. Furthermore, Chirinos et al. (2010) reported that total phenolic contents in Camu-camu depend on the maturity stages. Different types of polyphenols such as anthocyanins (cyanidin-3-glucoside and delphinidin-3-glucoside), quercetin, quercitrin, rutin, myricetin, naringenin, catechin, kaempferol, ellagic acid  and eriodictyol are found in Camu-camu fruits (Akter et al., 2011; Chirinos et al., 2010; Reynertson et al., 2008; Rufino et al., 2010). The total phenolic content of dried Camu-camu is 1161 mg GAE/ 100 g DM (Akter et al., 2011) (Table 2). The ellagic acid and flavan-3-ols groups represent the main phenolic compounds in this berry (Chirinos et al., 2010). According to Rufino et al. (2010) the total polyphenols in aqueous-organic extracts is higher in Camu-camu fruits (11.615 mg GAE/100 g DM) when comparing with Acerola and Jaboticaba (10.280 and 3584 mg GAE/100 g DM, respectively). On the other hand, the total anthocyanins (42.2 mg/100 g FW).
Different methods such as DPPH, 2,2-azinobis (3-ethylbenzothiazoline-6-sulfonic) acid radical (ABTS) and ferric reducing antioxidant potential (FRAP) are used to determine the antioxidant capacity of this fruit. According to Rufino et al. (2010), Camu-camu exhibited higher antioxidant capacity than Açaí, Acerola, Jaboticaba and Jambolão when used ABTS (153 μmol Trolox/g of fresh matter) and FRAP (279 μmol Fe2SO4/g FW) assays. In addition, Chirinos et al. (2010) reported a positive correlation between total phenolic content and DPPH antioxidant capacity (r2 = 0.931) but not between ascorbic acid levels and DPPH antioxidant capacity (r2 = 0.190), suggesting that the antioxidant capacity of the fruit is derived mainly from phenolic compounds. These results demonstrated that the vitamin C-rich fraction was the major contributor to the total antioxidant capacity of camu-camu fruit despite the high losses incurred. Nutritional compositions of camu-camu fruits shown in Table 1 are good source of minerals such as sodium, potassium, calcium, zinc, magnesium, manganese and copper. It also contains small amount of glucose and fructose the major sugar for camu-camu fruit. In addition, camu-camu pulps also contain different kinds of fatty acids monousaturated, saturated and polyunsaturated are presented into ripe and unripe. Kaneshima et al. (2016) this study exhibited stronger antioxidant activities measured by both single electron transfer assays and a hydrogen atom transfer assay than gallic acid and ascorbic acid. The peel and seeds of camu-camu are industrial waste products from the production of camu-camu juice, thus, applications of the seeds and peel as functional foods and food additives may be beneficial for the camu-camu industry. The extract of camu-camu seeds and peel showed potent 1,1-diphenyl-2- picrylhydrazyl (DPPH) radical scavenging activity (IC50 ¼ 32.2 mg/ mL), and C-glycosidic ellagitannins, vescalagin (2) and castalagin (3) were shown to be responsible for the DPPH radical scavenging activity (Kaneshima et al., 2013).
Many researchers have already considered that camu-camu fruits are a good source of vitamin C, and what we find in the mature was 1150 mg/100 g and green 1230 mg/100 g fresh matter of Vitamin C. (Table 1). According to Chirinos et al. (2010) the vitamin C of camu-camu fruits depends on the maturity stages. Vitamin C content in camu-camu was higher than other traditional Brazilian fruits such as acerola (1053 mg/100 g fresh matter), acai (84.0 mg/100 g fresh matter) (Rufino et al., 2010). Fiber contents (Table 1) are also very high, making camu-camu a good natural source of these nutrientes, 2.50 g/100 g for unripe and 2.40 g/100 g for ripe. Studies have shown that high-fiber diets have great therapeutic potential against dyslipidemia, cardiovascular diseases, and some types of cancer. Fibers also decrease intestinal transit time and glucose absorption, with consequent lowering of glycemia and blood cholesterol. Further studies are necessary to elucidate the overall potential of this fruit.