The raw materials used were polished rice type 1 (Oryza sativa) and brown sugar, from the city of Salvador, Bahia. The sugary Kefir grains were obtained from the Probiotics Laboratory of the Federal University of Bahia, UFBA.
Preparation of rice extract
The rice extract was elaborated based on the methodology proposed by Peyer et al. (2016). The Kefir grains were initially washed in water to reduce or eliminate soil contamination. In a stainless, the beans were cooked in the ratio of 1 part grain to 2 part water (1: 2 w/w), for 30 min. The product was filtered, drained and homogenized.
Experimentation and chemical analysis
Samples (in triplicate), control and rice extract, were inoculated with sugary Kefir grains following the traditional method (Figure 1). The control (C) and test (T) samples were 1000 mL of filtered 5% sugary water and rice extract, respectively. The proportion of 10% sugary Kefir grains was added in sterile glass containers (5% sugary water and rice extract). The fermentation time of the samples corresponded to 24 h/28°C. pH, acidity, and Kefir grains weight mass, were performed in 0 and 24 h. pH was determined using a Neomed model pH meter. Titratable acidity (in lactic acid) and mass weight (Shimadzu) were done according to the rules of the Adolfo Lutz Institute (2008). 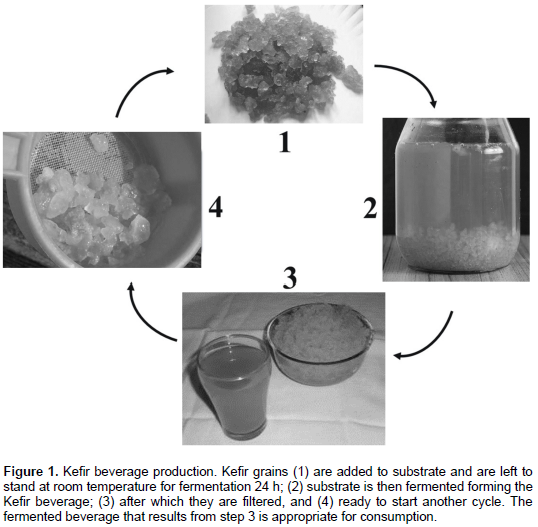 DNA extraction and PCR-DGGE analysis
The sugary Kefir (grains and rice cereal-based Kefir beverage) microbiological analysis was carried out at the Molecular Biology Laboratory of the Federal University of Lavras, UFLA, Brazil. For analysis, 1 g of sugary Kefir grains and 1 mL of rice cereal-based Kefir beverage sample were transferred into a plastic tube and was subjected to DNA extraction using a Nucle-oSpin Tissue kit (Macherey-Nagel, Du ¨ren, Germany). DNA extraction was performed according to the manufacturing instructions. The bacterial community DNA was ampliﬁed with primers 338fgc and 518r spanning the V3 region of the 16S rDNA gene (Puerari et al., 2015). The yeast community DNA was ampliﬁed using the primers NS3 and YM951r (Magalhães et al., 2010b). The ampliﬁcation was carried according to the method of Magalhães et al. (2010b). Polymerase chain reaction (PCR) products were analysed by denaturing gradient gel electrophoresis (DGGE) using a Bio-Rad DCode Universal Mutation Detection System (Bio-Rad, Richmond, CA, USA). Samples were applied to 8% (w/v) polyacrylamide gels in 0.5% TAE.
Optimal separation was achieved with a 15 to 55% urea-formamide denaturing gradient for the bacterial community and a 12 to 50% gradient for the yeast community, where 100% is deﬁned as 7 M urea and 40% (v/v) formamide. Electrophoresis was carried out for 3 h at 200 V at 60°C, and the gels were stained with SYBR-Green I (Molecular Probes, Eugene, OR, USA) (1:10,000 v/v) for 30 min. The gels were visualised via U. V. transilluminator, and images were captured using a Polaroid camera (Concord, USA). The bands were excised with a sterile surgical blade and stored at -20°C until further analysis. DGGE bands were excised from the acrylamide gels and the fragments were puriﬁed using the QIAEX II gel extraction kit (Qiagen, Chatsworth, CA, USA). DNA recovered from each DGGE band was reampliﬁed using the primers 338f (without GC clamp) and 518r for bacteria and NS3 (without GC clamp) and YM951r for yeast. The PCR amplicons were then sequenced (Applied Biosystems, Foster City, CA, USA). GenBank searches (http://www. ncbi.nlm.nih.gov/BLAST/) were performed to determine the closest known relatives of the partial ribosomal DNA sequences obtained.
Statistical analysis
In order to obtain the means of the control and test samples, Statistical package for Social Science (SPSS) statistical software, version 20.0 was used. Student's t test, using the 95% confidence level, was also used.

After 24 h fermentation period, a significant difference (p<0.05) was observed between the Kefir grains weight of the control (C) and test (T) samples (Table 1). The cell mass (T) growth was higher in relation to the (C) cultures (Table 1). According to Magalhães et al. (2010a, b), the amount of Kefiran (polysaccharide) released during the fermentation depends on the microorganisms involved, the culture medium composition, the temperature and the fermentation time. Probably, the growth of the (T) samples is related to the greater availability of nutrients present in the rice extract. The decreased pH value (~4.3 to ~3.5) and the increased acidity (~0.2 to ~0.3) during 24 h of fermentation are shown in Table 2. These observations indicated that the fermentation process was followed by the production of acids. This also demonstrates that the sugary Kefir grains were able to ferment the rice extract. The low pH value (~3.5) and high acidity value (~0.3) present at the end of fermentation appears to be responsible for the presence of lactic acid bacteria as the major bacterial species at 24 h (Table 2). Traditionally, many plating procedures are only partially selective and exclude members of the microbial community (Miguel et al., 2011; Nalbantoglu et al., 2014; Corona et al., 2016; Fiorda et al., 2017; Cho et al., 2018; Roos and Vuyst, 2018). 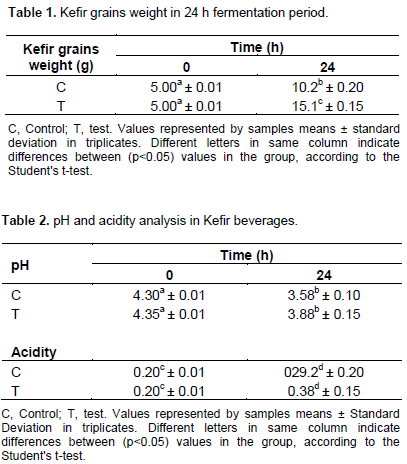 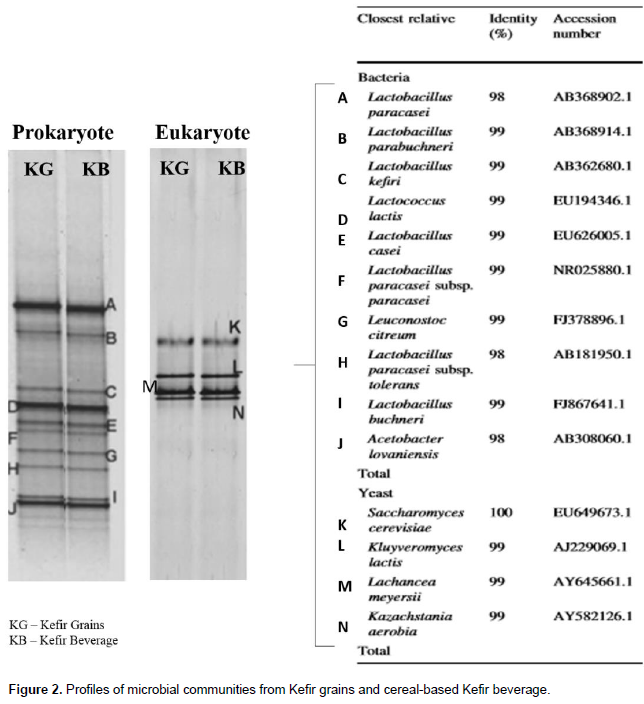 The results indicate that genera of bacteria, such as Lactobacillus, Lactococcus and Acetobacter, as well as yeast, such as Saccharomyces, Kluyveromyces, Lachancea and Kazachstania were the microorganisms present in sugary Kefir grains and rice cereal-based Kefir beverage. The sugary Kefir grains were able to ferment the rice extract and produce Kefir beverage functional and healthy that satisfy nutrition-related conditions such as allergies and malabsorption, food intolerances, and lifestyle choices, for example vegetarianism and low salt. This study is the first to report the rice cereal-based Kefir beverage production. The use of starter cultures as Kefir grains offers a promising tool for innovation and diversification of cereal-based beverages.