We report the properties of partially purified rhodanese, a cyanide detoxifying enzyme isolated from the kidney of the greater cane rat commonly known as grasscutter (Thryonomys swinderianus). T. swinderianus kidney rhodanese had a specific activity of 1.43 µmole/min/mg protein, a fold of 2.31 and a 55% recovery. The apparent Km values of 0.408 and 0.316 mM were obtained for both sodium thiosulphate (Na2S2O3) and potassium cyanide (KCN) respectively. Substrate specificity study showed that T. swinderianus rhodanese can use other substrates. The enzyme showed its maximum activity at pH 8.0 and 50°C. The assay for the effect of metal ions showed that the enzyme is not affected or inhibited by metal ions such as Na+, Fe3+ but inhibited by Hg2+. The continued existence of T. swinderianus after consumption of food crops with high cyanogenic glycosides suggests that the animal has a functional cyanide detoxification mechanism.

Due to its inhibitory effect on cellular respiration, cyanide is considered as a toxic compound for aerobic organisms. Various sources of cyanide reported include photo-synthetic bacteria, algae, fungi, plants and foods (such as beans, almonds and cashew nuts, etc) and even in the animal kingdom (ATSDR, 1997; EPA, 2003). Its presence has been reported in the roots of tubers such as cassava and potato grown in tropical countries. Cyanides are  very reactive poisons that can be deadly and may be released into the environment through industrial usage or vehicle exhaust (ATSDR, 2006). Some plant species contain cyanogen glycosides which upon ingestion release hydrogen cyanide, a poisonous gas (Conn, 2008). Plants, such as beans, cassava, and peas used as food in tropical countries has been reported to contain cyanogenic     glycosides.    Cassava     and    peas    are known to contain linamarin coexisting with lotaustralin (Uyoh et al., 2007).
Rhodanese (EC 2.8.1.1) is a ubiquitous enzyme and is widely distributed in plants (Nagahara et al., 1999; Aminlari et al., 2000). It is a detoxification enzyme that involves in the conversion cyanide (a toxic compound) to thiocyanate a less toxic compound (Agboola and Okonji, 2004; Lee et al., 1995). Various studies have reported the presence of rhodanese in the cytosol and other organelles (Nagahara et al., 1999; Steiner et al., 2018; Itakorode et al., 2019). Its detoxification potential has been reported in the liver tissues of diverse animals (Lee et al., 1995; Akinsiku et al., 2009). The highest concentration of rhodanese has been reported to be found in the liver of mammals, though, significant amounts can also reside in the kidney and other tissues (Cipollone and Visca, 2007). In spite of its widely studied detoxification role, research had made known that the enzyme also involved in other physiological activities such as energy metabolism and iron sulphur centres formation (Ogata and Volini 1990; Aussignargues et al., 2012).  Grasscutter (Thryonomys swinderianus) feeds generally on plant debris, cassava and grasses which have been demonstrated to contain a high content of cyanogenic glycosides and on consumption release cyanide, a poisonous compound (Conn, 2008). This study, therefore, attempts to characterize rhodanese from T. swinderianus kidney for the purpose of biochemical comparison and to further understand the cyanide detoxification mechanism of the animal

The animal, grasscutter (T. swinderianus) was obtained from hunters in Abagboro village in Ile-Ife, Osun state, Nigeria. It was transported to the laboratory within 10 min of its slaughter. It was then dissected to remove the kidney.
Extraction of intracellular rhodanese
The kidney was rinsed properly with distilled water to remove blood stains and weighed. 20 g of the kidney tissue was cut into pieces and then homogenized in Tris buffer, (100 mM, pH 7.2) with a warring blender. The homogenate was filtered and then centrifuged at 10, 000 rpm at 4°C for 30 min. The supernatant obtained was checked for rhodanese activity and protein content.
Enzyme assay
Modified method of Lee et al., (1995) was used to determine rhodanese activity. Briefly, the assay mixture consists of 50 mM (borate buffer pH 9.4), 200 mM Na2S2O3, 200 mM KCN, and 100 µl of the enzyme in 1 ml solution. The mixture was incubated with 15% formaldehyde (0.5 ml) for 1 min, followed by the addition of an appropriate volume of Sorbo reagent (Sorbo, 1951). The absorbance was then read at 460 nm using a visible spectrophotometer. One rhodanese unit (RU) was taken as the amount of the enzyme, which under the given conditions produced an  optical  density   reading  of  1.08  at  460 nm  per  min.  Protein content was determined using the Bradford (1976) method.
Purification procedure
The crude enzyme was subjected to 70% ammonium sulphate precipitation and left overnight at 4°C. After centrifugation for 30 min, the precipitate obtained was re-suspended in a small amount of 0.1 M Tris buffer (pH 7.2) and dialyzed. The dialysate was assayed for rhodanese activity and protein concentration. 5 ml of the dialysate was applied to pretreated CM-Sephadex c-50 column equilibrated with 0.1 M Tris-HCl buffer (pH 7.2). Unbound protein was removed with 0.1 M Tris-HCl buffer, pH 7.2, followed by step-wise elution with 0.5 M NaCl in the same buffer. At the rate of 20 ml per hour, fractions of 2 ml were collected and monitored for protein and rhodanese activity. The active fractions from the column were then pooled.
Characterization procedure
Kinetic parameters determination
The kinetic parameters (Km and Vmax) of the enzyme were determined using potassium cyanide and sodium thiosulphate as substrates. This was done by varying concentrations of each substrate between 10 and 60 mM at a constant concentration of the other substrate. The Lineweaver-Burk double reciprocal plot was used to determine the kinetic parameters (Lineweaver and Burk, 1934).
Substrate specificity
The ability of the enzyme to use different sulphur compounds was investigated using copper sulphate, ammonium sulphate, ammonium persulphate, 2-mercaptoethanol, Sodium sulphite, and sodium sulphate decahydrate. The activity was determined as described above and expressed as a percentage activity of the enzyme using sodium thiosulphate as the control.
Effect of pH and temperature and metal ions on rhodanese activity
To check the effect of pH on enzyme activity, the enzyme was assayed using buffers of different pH: Citrate buffer (50 mM, pH 3-5), phosphate buffer (50 mM, pH 6-7), 50 mM Tris-HCl buffer (pH 8) and borate buffer (50 mM, pH 9-10). To study the effect of temperature, the enzyme was assayed at temperatures between 30 and 100°C. Influence of metals such as HgCl2, NaCl, FeCl3 and MnCl2 was investigated at 0.1, 0.2 and 0.3 mM concentrations. The reaction mixture without the salt served as the control with 100% activity. 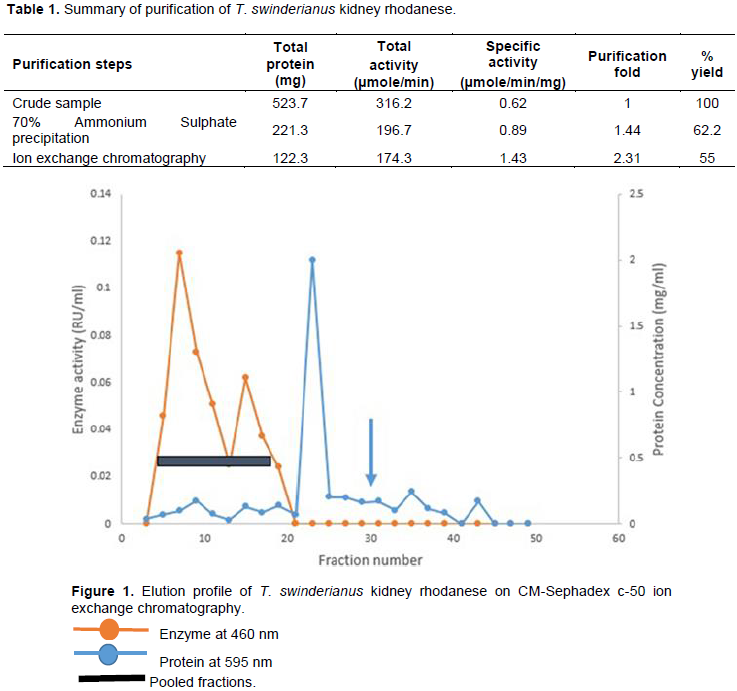 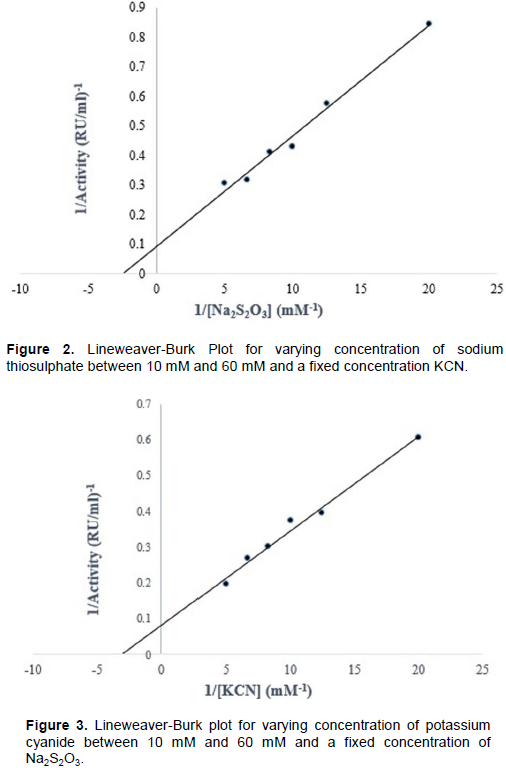 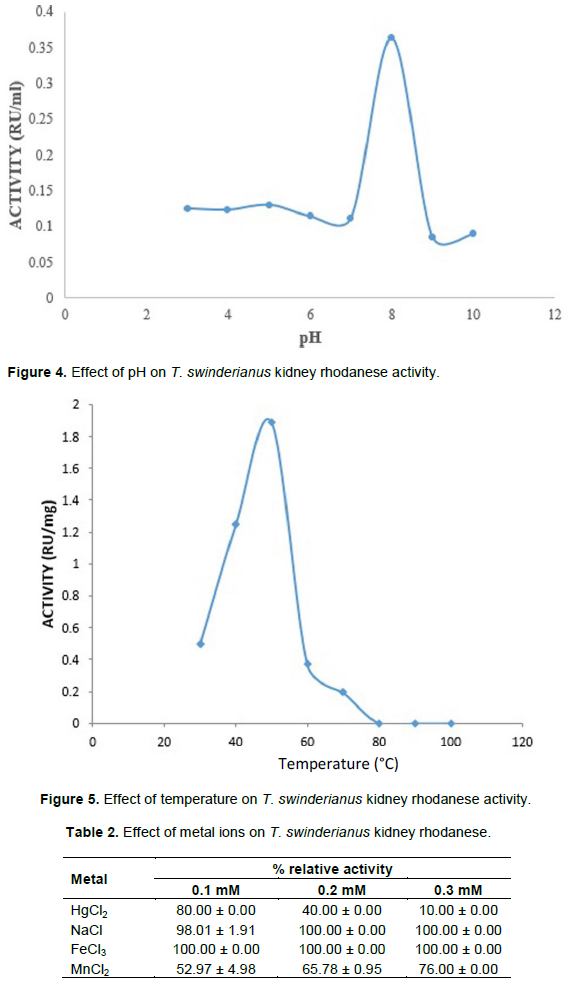 Rhodanese has been reported in many organisms from bacteria to animals (Agboola and okonji, 2004; Aladesanmi et al., 2009; Itakorode et al., 2019). In this study,  we  report  the  presence  of rhodanese, a cyanide detoxifying enzyme in the kidney of grasscutter (T. swinderianus). T. swinderianus feeds on cyanogenic plants such as green maize, sorghum, grasses with fairly high fibre content, cassava, etc. T. swinderianus kidney rhodanese was isolated and partially purified using 70% ammonium sulphate precipitation, and ion exchange chromatography on CM-Sephadex c-50. The enzyme had a specific activity of 1.43 µmole/min/mg of protein and 55% recovery. Different specific activity values have been reported for rhodanese from various sources (Aladesanmi et al., 2009; Okonji et al., 2010b). A value of 1.076 µmole/min/mg was reported for mouse liver rhodanese (Lee et al. 1995). Okonji et al., (2010b) also obtained a value of 8.4 µmole/min/mg for rhodanese from the liver of mudskipper. T. swinderianus kidney rhodanese has low specific activity. This may be due to the source of the enzyme. In most animals studied, the liver is the richest source of rhodanese (Westley, 1973; Dudeck et al., 1980; Drawbaugh  and  Marrs,  1987),  and this could indicate a heavy cyanide metabolizing function performed by this organ.
The kinetic parameters (Km and Vmax) of T. swinderianus rhodanese were obtained from the double reciprocal   plot  of   Lineweaver-Burk.  The  Km  values  of 0.316 and 0.408 mM were obtained for both potassium cyanide (KCN) and sodium thiosulphate (Na2S2O3) respectively. These results are similar but however, lower than those reported from other sources: bovine liver (Sorbo, 1953b: 19.0 and 6.7 mM for KCN and Na2S2O3 respectively), human liver (Jarabak and Westley, 1974:  9.5 and 4.5 mM for KCN and Na2S2O3 respectively),   mouse liver (Lee et al., 1995: 12.5 and 8.3 mM for KCN and Na2S2O3 respectively. The result from the Km values indicates that T. swinderianus kidney rhodanese has a preference for thiosulphate. This may suggest a possible efficient cyanide detoxification catalytic mechanism which is important for the survival of the animal. The affinity of the enzyme for thiosulphate would enhance the biotransformation of the toxic cyanide into less toxic thiocyanate.
The results for substrate specificity study showed that T. swinderianus can use other sulphur containing compounds for its detoxification activity apart from thiosulphate, which corresponds with the studies reported by other researchers. Sulphur has been reported to play a prominent role in the cyanide detoxification mechanism rhodanese (Westley, 1981; Okonji et al., 2011). Wodu (2015) investigated the effect of some sulphydryl compounds such as dithiooxamide, cysteine, 2-mercaptoethanol and glutathione on sheep liver rhodanese. These monoatomic sulphur compounds never served as sulphur donors in sheep liver rhodanese as compared to the sulphur donating property of thiosulphate. In this work, the enzyme showed maximum activity with other sulphur containing compounds. This could suggest an efficient detoxification mechanism of the enzyme even in the presence of other sulphur containing compounds other than thiosulphate.
In this study, maximum enzyme activity was observed at pH 8.0. This value compares to the range reported for other sources (Aladesanmi et al., 2009; Hossein and Reza, 2011). Aladesanmi et al. (2009) obtained an optimum pH of 8.5 for rhodanese from the liver of land tortoise. Optimum pH as low as 6.0 and 6.5 was reported for giant freshwater prawn (M. rosenbergii) hepatopancreas and catfish liver rhodanese respectively (Akinsiku et al., 2009). The optimum high pH obtained may be due to the habitat of the animal as rhodanese obtained from an aquatic organism tend to show a relatively lower optimum pH. The optimum temperature of the enzyme was found to be 50°C. The optimum temperature of 50 and 55°C were reported for bovine liver and Trichoderma strain rhodanese respectively (Sorbo, 1953b; Ezzi et al., 2003).
Okonji et al., (2010b) obtained an optimum temperature of 55°C for soldier termite rhodanese. The optimum temperature of 50°C for T. swinderianus rhodanese indicates that the enzyme could endure a harsh condition. This optimum temperature could be an adaptive feature which sustains its survival in the kidney of T. swinderianus found in the tropical regions. Also, the effect of metals showed that metal ions such as Na+, Fe3+ had no inhibitory effect on T. swinderianus rhodanese activity while Hg2+ had an inhibitory effect on the enzyme activity. Okonji et al., (2010b) reported the inhibition of soldier termite rhodanese by Hg2+ and Mn2+. The absence of inhibitory effect of metal ions such as Na+, Fe3+ observed in this study may be due to constant exposure of the animal to these metal ions from inorganic fertilizers, pesticides and other compounds used in the cultivation of food crops on which the animal feed. Also, the inhibition of Hg2+ on the enzyme activity may be due to interactions of the metal ion with the sulphydryl groups at the active site of the enzyme, thereby causing a conformational change in the structure of the enzyme.

In conclusion, the study was able to establish the presence of rhodanese in T. swinderianus kidney and the enzyme showed similar physicochemical properties to rhodaneses obtained from other sources. The continuing existence of the animal after consumption of cyanogenic plants suggest that the animal has a means of detoxifying cyanide and our report has shown that rhodanese is one of them.