Corporate social responsibility concept is relatively new in Cameroon. That is why a majority of the large companies do not have either CSR policies in place or a team that deals with corporate social responsibility issues. Very few companies have been identified in Cameroon as having CSR policies in place. One of these companies is ENEO which is the hydro-electrical company in Cameroon. This paper examines and evaluates ENEO’s CSR policies and activities in the local communities surrounding two of its reservoir dams which are the Mape and Bamendjing dams. The paper explores the problems of the people living in the local communities, the expectations they have towards ENEO, what CSR policies ENEO has in place and how it affects the people in these two local communities. The data for this article were collected by conducting interviews with forty participants that live in villages that surround the Mape and Bamendjing dams. The finding from this study indicates that ENEO CSR practices have not been efficient and very limited in these areas. Considering these two areas alone, ENEO could be described as not practicing any CSR activities. The expectation that the local inhabitants have on ENEO is very high in terms of sustainable development.  However, the limited or none existence of CSR activities in these areas does not affect the profitability of the company because ENEO has monopoly in the market in Cameroon.

CSR policies and practices have been proven to be influenced by company size (Nasif AL-Shubiri et al., 2012), profitability (Sangle, 2010), corporate governance structure (Mohd and Nazli, 2007), company industry (Mohd and Nazli, 2007), and company’s rules and policies (Iman, 2000). Factors such as characteristics of employees and personal attributes (Keinert, 2008), traditional beliefs and customs (Ahmad, 2006), managerial attitude to protect the environment (Sangle, 2010) drive CSR practices in companies. While CSR has become an established concept in some countries like the UK, USA, etc. with many academics researching on its impact on the society and the environment, very
limited studies have been conducted in Cameroon.
This could be justified based on the fact that CSR is not an established concept amongst businesses in Cameroon. A survey conducted by Institut RSE Afrique in 2014i, found out that most of the businesses in Cameroon have no sustainable or CSR division, and a large number of the business are unaware of what is expected of them in terms of CSR practices, e.g. the ISO 26000 international guidance on social responsibility. Baxter (2015) further pointed out in another study on CSR practices in Chinese businesses in Cameroon that CSR practices have not developed amongst the businesses in Cameroon due to unsolved problem that goes back years, such as unpaid salaries, bonuses, etc. Akwaowo and Swanson (2015) in their study of CSR in Cameroon concluded that the increase number of foreign direct investment in Cameroon did not lead to a higher level of corporate responsibility and poverty reduction in the regions where the businesses were operating. On the contrary they found out that there was an increase in the poor standard of living among the citizens due to low involvement in corporate responsibility. Demuijnck and Ngnodjom (2013) examined the responsibilities of SME in Cameroon in comparison with CSR practices in companies in Europe. Alemagi et al. (2006) found that although industries along the Cameroon coast adopted the environmental management systems they were still faced with a lot of hurdles as to fully make the use of the system environmentally beneficial. Tita (2011) considered the coordination of corporate social responsibility in sub-Saharan Africa with particular reference to transnational corporations in Cameroon and found out that there was less use of socialisation and little evidence of centralisation with transnational corporations CSR practices in Cameroon. Ndjanyou (2015) and Sotamenou (2014) examined whether the SMEs in Cameroon and their managers CSR practices were backed up with public entities, business associations and civil society engagement. Ollong (2014) examined CSR practices of three companies in Cameroon (MTN, Guiness Cameroon and BAT) such as health projects, employment rate, payment of better levels of wages to the employees that was more than what the government and domestic companies offered their employees and concluded that the companies were impacting positively on the government and society in which they conducted businesses. These studies represent some of the few studies done by academics on CSR Cameroon. However, no study has specifically considered ENEO CSR policies and its effect on the local communities surrounding the Bamendjing and Mape reservoir dams.
[i] Thierry Tene, ‘CSR gets the cold shoulder from most Cameroon companies’ 21st February 2014, http://www.businessincameroon.com/business/2102-4669-csr-gets-the-cold-shoulder-from-most-cameroon-companies

Ten companies were identified in Cameroon as having the best CSR policies which include: MTN, Orange, SABC, Camrail, ENEO, Hysacam, Cimencam, Sodecoton, Camtel and Guiness Cameroun.
ENEO was specifically chosen for this study because its activities have greater impact on the society (particularly those people living around the dams) than the rest of the nine companies. Out of the three reservoir dams operated by ENEO, two were chosen for the study being the Mape and the Bamendjing dams. Several villages (about eleven) surround these dams but six villages were visited from which the data for this study were collected. Only six villages were included in this study due to accessibility problems to the other villages. The roads were treacherous and consequently five villages were not included in the study. Information about the six participated villages is confidential because it was a condition for which the participants agreed to participate in the study. The research was based on face-to-face interviews with forty local people living in the villages around the Mape and Bamendjing dam. These forty participants include fishermen, workers of ENEO company, public officers, traders, local chiefs, unemployed natives and farmers. Twenty in-depth face-to-face interviews were conducted in the localities around the Mape dam and twenty interviews were conducted in the localities around the Bamendjing dam (Tables 1 to 3). The forty participants for the interviews were selected using a snow-balling approach whereby people recommended others for the interview. The data were collected on anonymous basis with full consent of the participants. The interviews were based on unstructured question and digitally recorded, transcribed by the researcher and analysed. The grounded theory approach was used to analyse the data. 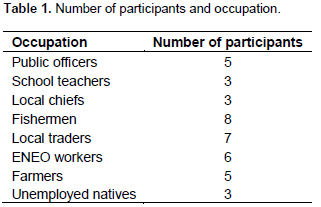 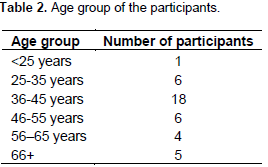 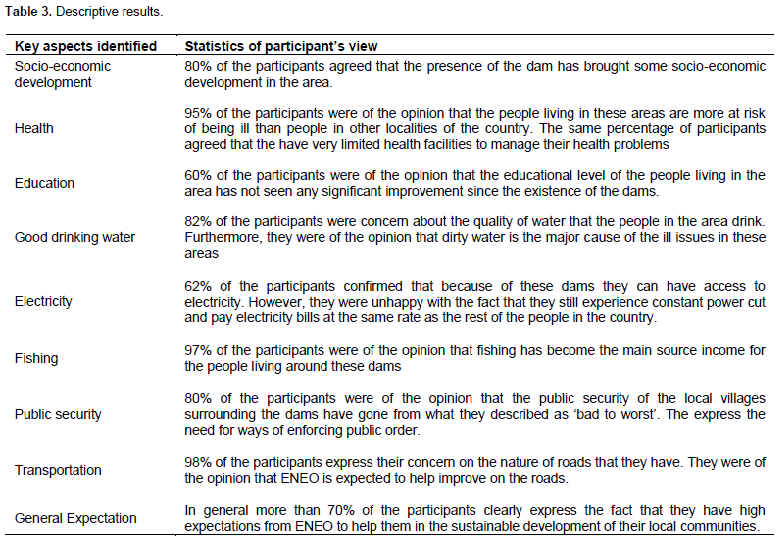 CSR practices are core practices that could help the local communities and the country as a whole to develop both financially and otherwise. However, the concept of having CSR policies and practices by companies in Cameroon is still relatively new. However, ENEO has been identified as one of the companies in Cameroon that has CSR policies and is involved in activities and projects to help the local communities and the country as a whole to alleviate poverty. However, this paper argues that ENEO CSR policies are targeted towards urban areas that do not desperately need the measures as much as the societies where their dams are located. Most of the people especially in the local society surrounding the Mape dams do not have pipe borne water to avoid drinking contaminated water; schools to educate the community on the effect of the dams; law enforcement officers to guarantee security for the people; no good roads to ensure safe transportation etc. There is a need for ENEO to move its CSR activities to these areas that are most needed which are the local communities around the dams.

The complaints and negative feedback about ENEO from these people is unable to impact on the competition of ENEO business because ENEO has monopoly over the electricity sector in Cameroon. However, the concerns that these people have raised requires immediate reaction not only from ENEO company but also a reaction from other sectors of the government (such as the Ministry of Health, Ministry of Fisheries, Transportation sector etc.) and the government as a whole. This article form the basis for further studies to carried out on the activities of ENEO company and its CSR policies around these locality. This article did not cover environmental aspects which is another important aspect of CSR. Furthermore, this paper only considered the communities that surround the Mape and the Bamendjing dam, a more extensive research could be conducted which will include the local communities surrounding all the dams in Cameroon to properly evaluate their position and ENEO CSR policies and practices.