The study employed the World Bank Enterprise survey 2013 for Uganda and quintile method to determine the relationship between firm location, International Standards Organization (ISO) certification and cash inflows of Small and Medium Enterprises (SMEs) in Uganda. The results show that ISO certification and firm location are positively and significantly related to SMEs’ cash inflows. It was also realized that other factors such as using email, foreign ownership, access to finance and tax administration are not obstacles to firm’s cash inflows. Our findings suggest that creating awareness among entrepreneurs about ISO certification and creating enabling environment for SMEs in Uganda to become ISO certified should be highly considered by Government of Uganda. In addition, the Government of Uganda with Kampala Capital City Authority must develop deliberate policy to enable SMEs get internet connection cheaply and faster. This will ease doing businesses and enable SMEs’ cash inflows to grow.

Cash is considered to be an important factor while managing firm’s working capital (Abioro, 2013; Enow and Kamala, 2016). In addition, SMEs failure has been linked to inadequate cash flow management (Uwonda et al., 2013). Although the study by is about cash flow management, it was limited on owner’s inefficiencies, poor tax planning and poor working capital management as causes of cash flow mismanagement. ISO certification and firm location was not studied.
ISO certification and cash inflows
The frame work of ISOs involves a set of standards for instance ISO 9000, ISO 9001, ISO 9003, ISO 9004-2 and ISO 14000. The aim of these standards is to ensure that goods and services are provided at an international standard (Aba and Badar, 2013). The ISO certification can be of a competitive advantage to firms. Entrepreneurs, therefore, need to re-affirm their strategies by adopting them. With ISOs being adopted, retail sales can more than double (International Standards Organisation, 2017).
Corbett et al. (2005) empirically established that ISO 9000 certification influences faster growth in firm’s sales. However, the growth does not mean sales increase is relative to asset base. In addition, Beata and Naotaka (2018) using a firm level panel data in Slovenia covering a period 1987 to 2006, established that ISO 9000 certification boosts firms’ sales, exports and employment. Mahelet (2014) established financing from local customers as one of the significant determinants of ISO certification among firms in Ethiopia.
The ISO standards provide a basis upon which international consumers can rely to purchase products. The ISO certification in modern days is a pre-requisite for firms if they are to achieve quality, environmental protection and thus appeal to a large clientele. It is ideal for Ugandan firms, therefore, to become ISO certified in the quest for large market to grow the cash inflows. However, the challenge that exists with Ugandan firms is that most of them do not  promote  a  formal  agenda,  yet ISO must operate under formal systems.
In addition, Ugandan SMEs find the criteria for being ISO certified difficult to cope with (Ernst and Young, 2011) and at the same time, some Ugandan consumers in specific markets such as the banana products market do not care about quality to consume (Kiiza et. al., 2004). It is thus interesting to establish whether ISO certification can influence firm cash inflows in situations where most firms do not want to be formal or find it hard to be ISO certified and having a section of customers not minding quality to consume. The following hypothesis can thus be stated:
H1: There is a positive significant relationship between ISO certification and cash inflows in Ugandan firms.
H0: There is no positive significant relationship between ISO certification and cash inflows in Ugandan firms.
Firm location and cash inflows
It is projected that by 2025, the ratio of urban to rural dwellers will be 3:2 (Satterthwaite et al., 2010). The growth in population may be associated with increase in demand for products and product variety. Holmes (1999) contended that firms located in places of high population have an opportunity to produce a variety of goods for the market.  Furthermore, firms locate where they expect market opportunities (Lucia et al., 2012). In addition, because they have less access to information and high operating costs, rural firms are less liquid compared to urban firms (Tim and Paul, 2005).
The studies which relate firm location to liquidity/or firm sales/or cash inflows are from developed world such as the United States of America. Thus, there are limited study findings about the subject in under-developed economies such as Uganda.
Although firms are free to establish anywhere in Uganda, firms which locate in urban centers have an advantage of serving the community with higher purchasing power and incur lower transaction costs. However, Uganda is unique in a way; as population rises, the number of poor people also increases (Uganda Bureau of Statistics, 2017). Therefore, it may not be a surprise that firms that locate in urban areas have stagnating sales which affect their cash inflows/or liquidity. It is important then to establish the effect of location to firm’s cash inflows. From the above discussion the following hypotheses arise:
H2: There is a significant positive relationship between firm location and firm cash inflows.
H0: There is no significant positive relationship between firm location and firm cash inflows.

In   order   to   provide   insight  on  the  effect  of  firm  location  and possession of an ISO on cash inflow, this study employs both descriptive and quantitative statistical techniques. Descriptive statistical analysis entails the use of cross-tabulations where we generated the average percentages of firms and by key background characteristics in order to draw insights on the interactions between different characteristics. On the other hand, quantitative statistical techniques entail the estimation of an empirical model with a view of answering the set study questions.
Empirical model
The empirical model employed in this section draws from Beck and Walgenbach (2009), but with modifications in the outcome variable and also the explanatory variables considered in the overall model. It is assumed that within each firm 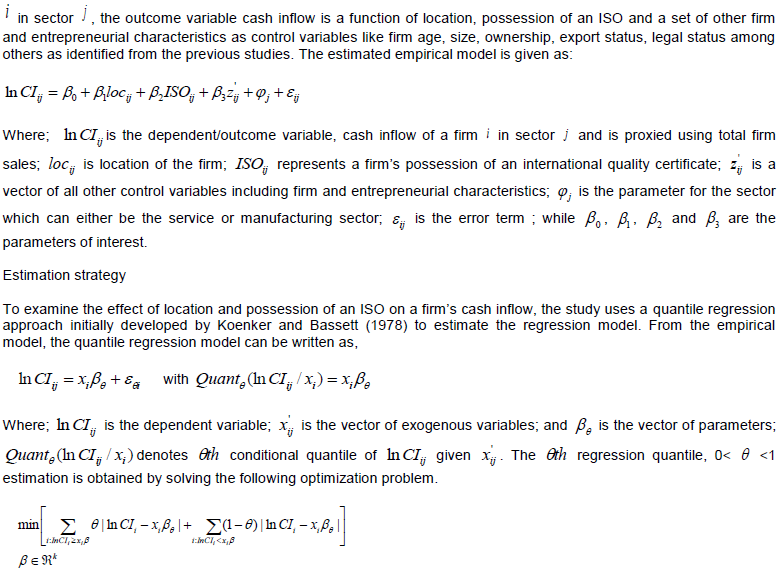 The quintile regression is deemed appropriate because unlike the OLS, it permits assessing the effect of different explanatory variables at various quintiles in the distribution of the dependent variable. The quintile regression estimation is also more robust in case of presence of any outliers and also when the dependent variable is not normally distributed. Results from the OLS estimation are reported and compared with those from the quintile regression (Table 1).
Data source and scope
The study uses the World Bank Enterprise Survey (WBES, 2013) data for Uganda. This is a cross-sectional data set covering a period of 2013. The WBES data covers information on various aspects with topics ranging from sales and supplies performance, finance, firm and entrepreneurial characteristics, and the general investment climate. This information is provided by a representative sample of top managers and firm owners engaged in non-agricultural formal sector. A total sample of 762 firms belonging to both the manufacturing and service sector from all regions of the country, that is; Kampala, Central, Western, Eastern and Northern were considered.
Descriptive statistics
Table 2 provides summary statistics for the study variables. Firms’ cash inflow is measured by annual sales in the fiscal year prior to the survey and summary statistics for difference between location and ISO certification is shown in Table 3.  Firms located in Kampala have more average sales than firms located in other towns of Uganda. Likewise, ISO certification for firms located in Kampala has more impact on sales than ISO certification for firms located in other towns of Uganda. 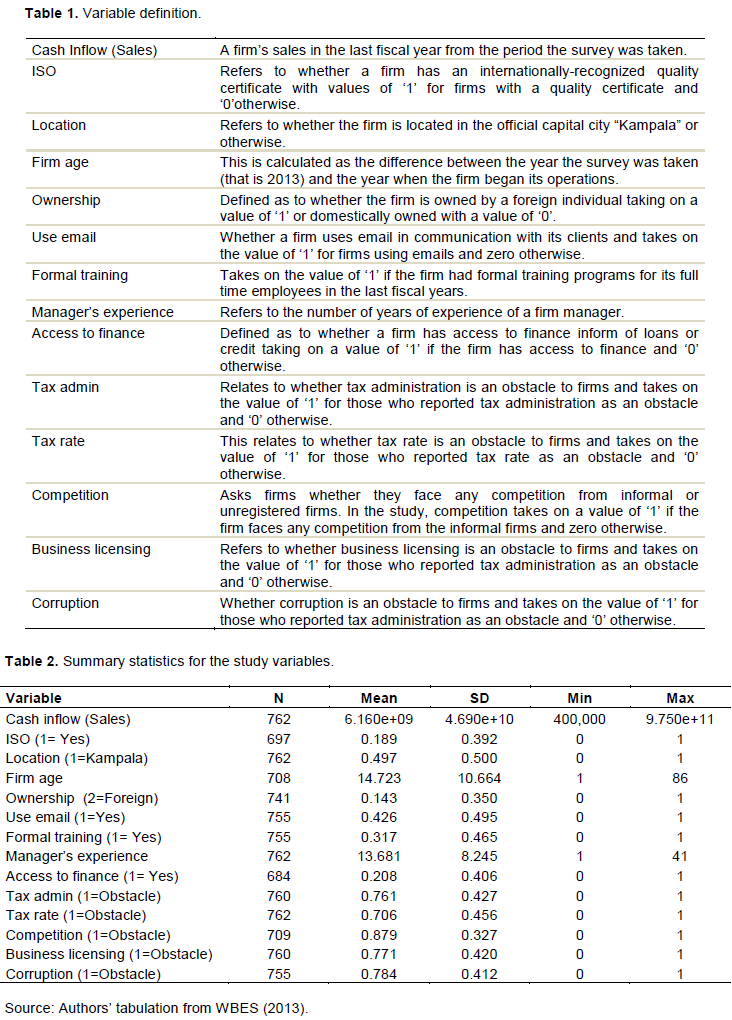 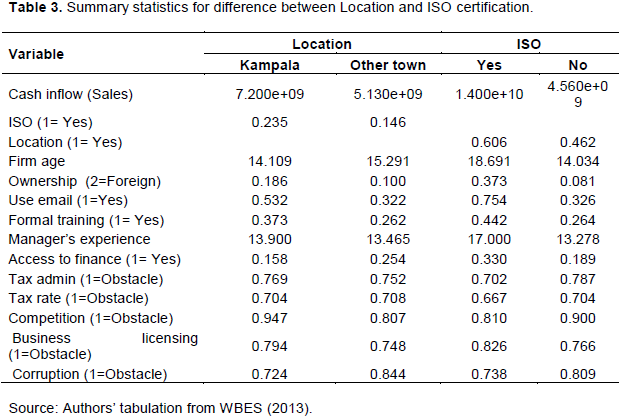 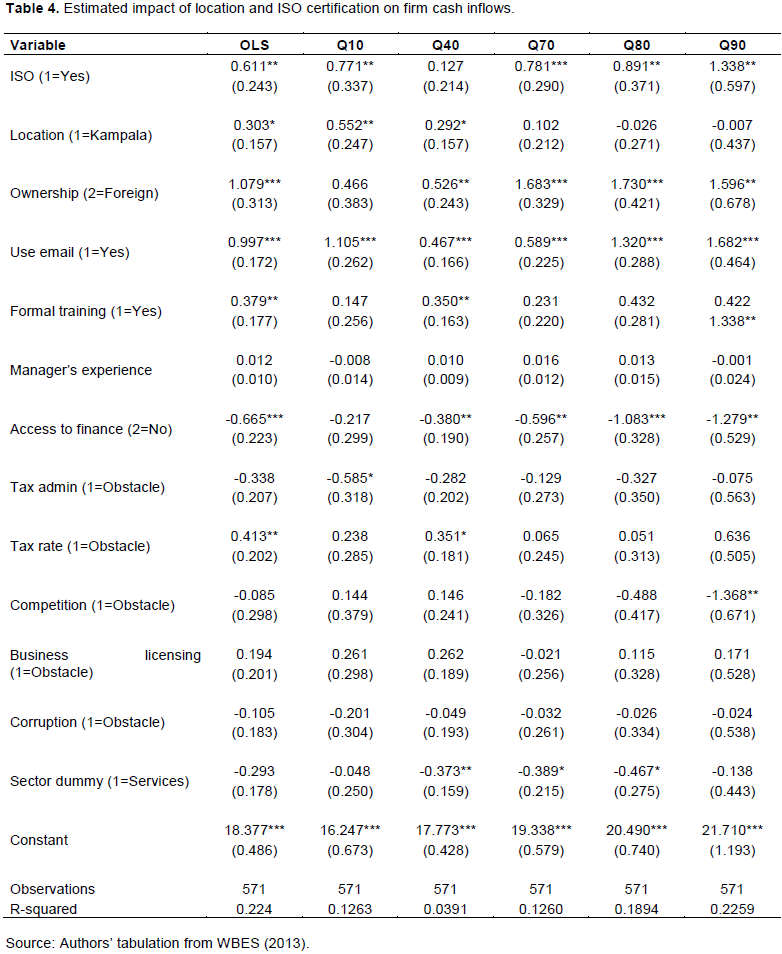 Table 4 indicates that locating firms in Kampala is significant and positively related  to  firm  cash  inflows  at  Q10 and Q40.  This implies that firms with low sales level that locate in Kampala can make more turnovers compared to similar firms located in other towns. Findings concur with Tim and Paul (2005) who established that firms that locate in urban areas are more liquid compared to those located in rural areas. Findings also concur with Voulgaris et al. (2003) who established that firms located in bigger cities have less liquidity problems.  However, firms with larger level of sales from Q70 to Q90 have an insignificant positive relationship between location in Kampala and cash inflows. This implies that locating in Kampala (capital city) does not matter for firms with relatively high level of sales in generating cash inflows. The findings in Table 3 concur with Lucia et al. (2012) who assert that firms locate where they expect market opportunities.
Given the above discussion, the second hypothesis H2: There is a significant positive relationship between firm location and firm cash inflows is confirmed. The relationship between ISO certification and firm cash inflows using OLS analysis is significant and positive at 0.611. The performance at OLS is similar to that of quintiles except for Q40. On the other hand, locating firms in Kampala is positive and significantly related to cash inflows using the OLS approach. The OLS results are similar to results obtained using quintile approach at only Q10 and Q40. It was also discovered that the use of emails, access to finance, foreign ownership and tax administration are not obstacles to firms’ cash inflows.