Methanolic extract obtained from the dried leaves of Withania Somnifera was subjected to column chromatography leading to the isolation of two withanolides. Their structures were elucidated using 1D and 2D NMR spectroscopy. The isolated withanolides were determined to be 5α, 17β-dihydroxy-6α, 7β-epoxy-1-oxo-witha-2, 24-dienolide (1) and 4, 5, 6, 15-tetrahydroxy-1-oxo-witha-7-enolide (2). The bioassay of the methanolic extracts showed activity against the fungal pathogens, Fusarium moniliforme, Fusarium graminearum, Colletotrichum lindemuthianum and Pythium spp. The extract was also active against bacterial pathogens, Xanthomonas campestris pv. phaseoli and Pseudomonas syringae pv. phaseolicola. The withanolides did not show any bioactivity indicating that they are either active only synergistically with other compounds within the extracts or there are other active compounds in the extract.

Withania somnifera, known commonly as ashwagandha (in India), Indian ginseng, poison gooseberry or winter cherry (English), is a plant in the genus solanaceae or nightshade family. This species is a short shrub growing 1 to 2 m tall. It is the most common and widespread species in the genus and occurs naturally, mainly in the drier regions, from the Mediterranean through tropical Africa to South Africa. It is grown in India and elsewhere as a medicinal crop plant, mainly for its fleshy roots and is the main herb used in Ayurvedic medicine (Rani et al., 2012).It occurs naturally in East and Central Africa. The major chemical compounds reported from W. somnifera are withanolides (Misra et al., 2007). These are structurally diverse steroidal compounds with an ergosterol skeleton, whereby C-22 and C-26 are oxidized to form a δ-lactone. Other main chemical constituents are alkaloids and flavanoids, (Bashir et al., 2013). Numerous studies have been done and many compounds are isolated from the leaves, roots and berries of W. somnifera, withanolides, notably withaferin A, 27-hydroxy withanone, 17-hydroxy withaferin A, 17-hydroxy-27-deoxy withaferin A, withanolide D, 27-hydroxy withanolide B, withanolide A, withanone, 27-deoxywithaferin A, L-asperaginaseetc Mirjalili et al., 2009; Oza et al., 2010 Singh et al. 2010). The presence of the many chemical constituents have been confirmed through phamacognistic and phytochemical analysis of this plant (Rani et al., 2012). There is increasing infestation of diseases on food crops caused by fungal and bacterial pathogenss. It is estimated that 10% of food production is lost to diseases every year (Strange and Scott, 2005). The chemical means of control used has brought more harm than good. Reseachers are on the look for better and more safe ways to control these diseases. In this study, the activity of the methanolic extracts of W. somnifera against fungal pathogens; Fusarium moniliforme, Fusarium graminearum, Colletotrichum lindemuthianum and Pythium spp., bacterial pathogens; Xanthomonas campestris pv. phaseoli and Pseudomonas syringae pv. phaseolicola was investigated. Isolation of two withanolides from the leaves of W. somnifera is also reported. The structures were ascertained by comparing the spectral data with those reported in the literature. Elucidation was done by spectroscopic methods and chemical transformations, 1D and 2D NMR was used to determine the structures, which are discussed in this paper.

The leaves of W. Somnifera were collected at the Botanical garden of Egerton University. The taxonomical identification was done at the department of Biological Sciences where the voucher specimen was deposited. The dried leaves were dried under shade and ground into a fine powder using a grinding mill (Thomas-Wiley mill model 4). About 500 g of the ground sample was soaked with about 700 ml of methanol for 72 h and filtered through activated charcoal. The dried methanol extract was subjected to thin layer chromatography (TLC) analysis to determine the optimum solvent system which was found to be ethyl acetate and hexane in the ratio of 7:3. Purification was done through column chromatography with this solvent system.
Preparation of the sample for bioassays
From the dry methanol crude extracts, the following concentrations were prepared in dimethylsulfoxide (DMSO) 200, 100, 50, 25, 12.5, 6.25 and 3.125 mg/ml; the different concentrations were used for antibacterial tests. For compounds 1 and 2, 40 mg/ml was prepared. Sensitivity discs (6 mm) were used. The discs were sterilized by autoclaving at 121°C for 15 min.
Screening for antifungal activity
The extracts were screened for antifungal activities. Paper disc diffusion inhibition test was used to screen for antifungal activity of the methanolic crude extracts. One millilitre of fungal suspension (approximately 106 spores) was uniformly spread on sterile SDA media in Petri dishes (khan et al., 2008). A concentration of 100 mg/ml sample was used. Sterilized paper discs were impregnated with 10 µl of the prepared concentration and placed at the centre of the inoculated culture plates. The experiments were done in triplicates. The plates were then incubated at 25°C. The inhibition zones were clearly visible on the third day after the incubation and measurement of the diameters of inhibition zones was done and the average of the three measurements taken. Nystatin discs were used as reference standard (positive control) while the negative control was DMSO. The fungi that were used include Fusarium moniliforme, Fusarium graminearum, pyThium ultimum and Colletotrichum lindemuthianum. The diameters of the inhibition zones are shown in Table 1. 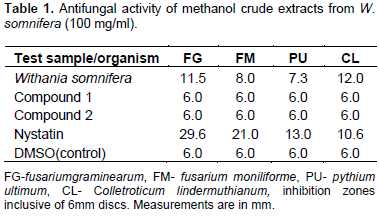 Isolation and purification by column chromatography
The column was packed by slurry method using silica gel 60 0.6-0.2 mm (70-230 mesh ASTM), Supplied by Indo-lab suppliers. Approximately 2 g of the dry crude extracts was weighed and mixed with 2 g of silica gel. Using a pestle and motor, the extracts and silica gel, were ground into fine dark brown powder. The finely ground sample was then introduced into the column and eluted with the solvent system established through TLC analysis, (7:3 ethyl acetate, hexane). Fractions of equal volumes were collected and TLC analysis of each fraction was done. Fractions with the same TLC patterns were pooled together and concentrated. After extensive column purification, two compounds were isolated and analysed by NMR spectroscopy. The NMR data are shown in Tables 3 and 4 and the NMR spectrum is shown in Appendices 1 to 9. 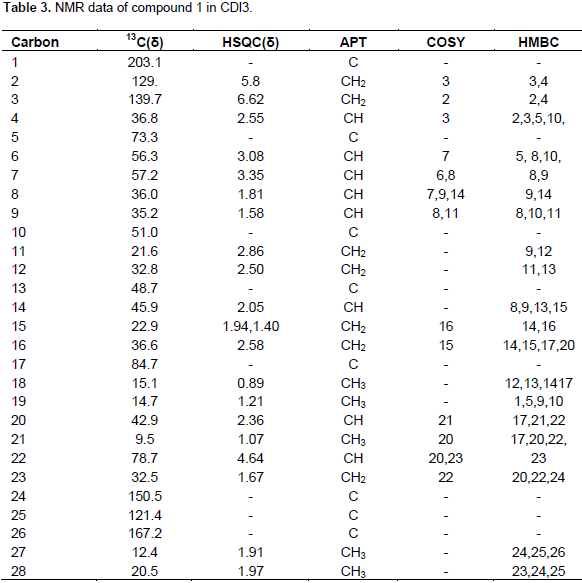 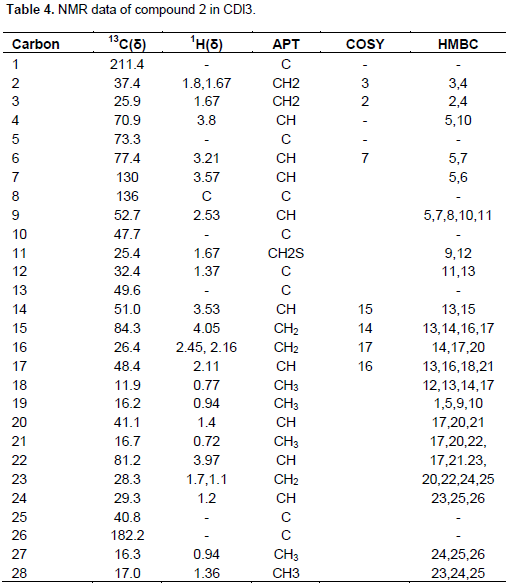 The extract showed significant inhibition on all the tested fungal pathogens. The highest activity was observed against C. Lindermuthianun (12 mm) as compared to the reference standard; Nystatin which registered an inhibition zone of 10.6 mm (Table 1). The isolated compounds 1 and 2 did not show any bioactivity, indicating that they are either active only synergistically with other compounds within the extracts or there are other active compounds in the extract. In Table 2, it is evident that methanolic extracts of W. somnifera showed significant inhibition on the growth of the bacterial pathogens even at lower concentrations. The activity of the extract increased with increasing concentrations. The inhibition zones were visible even after 72 h of incubation for bacterial and hence the serial dilution was done to establish the minimum inhibitory concentrations (MIC). The MIC for P. syringae pv. Phaseolicola was found to be 12.5 and 25 mg/ml for X. Campestris pv. phaseoli.
Structure elucidation
Two compounds were isolated from W. somnifera (1 and 2) whose structures have steroidal lactones skeleton. Compound 1(figure1) was obtained as a crystalline solid after running the column on crude methanol extract using ethyl acetate and hexane in the ratio 7:3, respectively. The HRMS spectrum showed [M] +atm/z 470.6028 which corresponds to the molecular formula C28H38O6. The 1HNMR spectrum revealed presence of five methyl signals of withanolides at δ= 0.89 (s), 1.21 (s), 1.07 (d), 1.91 (s), 1.97 (s) for H-18, H-19, H-21, H-27 and H-28, respectively.  The13C NMR spectra of compound 1 supported the presence of 28 carbon resonances. Which include five methyl, six methylene, nine methyne and eight quaternary carbons. Downfield signals at δ= 203.1, s for C-1; 129.0, d for C-2; 139.7, d for C-3 were indicative of α, β-unsaturated ketone. The signals for E ring (α, β-unsaturated lactone at δ=167.2for C-26; δ=78.5 for C-22; δ=150.5 for C-24 and δ=121.3 for C-25) imply that C-26 and C-22 have oxidized to form the usual E ring of a withasteroid. The singlet at δ=73.1 for C-5 along with the doublets at δ=56.3 for C-6 and δ=57.2 for C-7 corresponded to the hydroxyl and epoxide groups, respectively, matching with the iso-withanone isolated from the berries of W. somnifera, (Lal et al., 2006).13C NMR was also indicative of the presence of another hydroxyl at the quaternary carbon C-17. 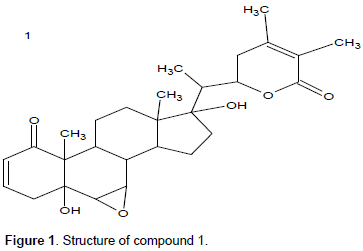 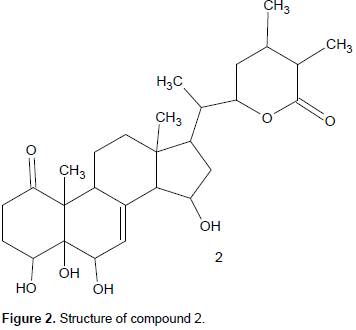 The compounds isolated from W. somnifera, 5α, 17β-dihydroxy-6α,7β-epoxy-1-oxo-witha-2,24-dienolide (1) was isolated for the first time from the leaves, since it was first isolated from the berries of the plant (Lal et al., 2006). We also report for the first time, the isolation of 4, 5, 6, 15 tetrahydroxy-1-oxo-witha-7-enolide (2) from the leaves of W. somnifera, and the bioassays of the crude methanolic extract against the fungal pathogens which revealed that, the extract was more active against C. Lindermuthianum (12 mm) than the standard nystatin which is registered as an inhibition zone of 10.6 mm. The extract showed significant activities against all the test pathogens. These results could justify the extensive use of W. somnifera for treatment of various ailments. The results also confirm reports of other researchers (Bashir et al., 2013; Baskaran and Velus, 2012; Singariya et al., 2012). The isolated compounds 1 and 2 did not show any activity on the tested pathogens.

The authors declare there is no conflict of interest.

The authors acknowledge Von Humboldt Foundation for funding this research and Egerton University for providing the necessary facilities and equipments for the research.