Nosocomial infections have impacted great burden in healthcare system and has led to deteriorating health condition and deaths. This study characterizes medically important bacterial diversity, isolated from staff hands, hospital surfaces and wastes in healthcare settings in Kenya during a one year period. Descriptive cross sectional hospital based study design and simple random sampling method was used to collect 246 samples from 10 sections in each hospital, using sterile cotton swabs and processed in the laboratory. Colony morphology and biochemical characterization was also recorded and confirmation of Enterobactericeae using API-20E test for later study of ESBL resistant genes was done. Statistical analysis was done using Microsoft Excel and ANOVA. The study highlighted the presence of Providentia rettgeri (21.01%), Staphylococcus aureus (18.47%), Escherichia coli (13%), other Gram negatives (9.55%), Pseudomonas aeuriginosa (9.3%), coagulase negative Staphylococcus (CONS) (9.12%), Serratia marcescens (6.58%), Klebsiella pneumonia (6.36%), Proteus vulgaris (4.03%) and Enterobacter cloaca (3%). Most nosocomial infections especially urinary tract infections are caused by these bacteria. It is necessary for hospitals to implement most of the recommended measures in this study to reduce the risk of transmission of pathogens via contaminated hospital surfaces and sites.

Hospital is the place, which is frequently accessed by the people irrespective of age, sex, race, religion, region and even nationality. The waste generated during entire healthcare activities has higher potential to produce health and environmental hazards than the wastes of other places (Boyce et al., 1997). Hospital acquired infection also called nosocomial infection is an infection acquired in hospital by a patient who was admitted for a reason other than that  infection.  Nosocomial  pathogens are organisms causing diseases that are acquired from the hospital and healthcare environment within few days of admission and are responsible for nosocomial infections (Medubi et al., 2006). The hospital exists as a closed community; it is therefore not surprising that certain microorganisms become predominant and cause diseases (Boyce et al., 1997). The pathogens can be expelled from an infected or colonized patient either through direct contact, aerosols  droplets  or faeces to the environmental surfaces. These pathogens can be contracted by the healthcare workers and even by the patients. Therefore, environmental surfaces in healthcare centers act as reservoir for bacteria and can as well serve as vectors of the bacterial pathogens (Boyce et al., 1997). The risk for nosocomial infections poses a potential patient safety threat (WHO, 2002). These infections are often caused by breaches of infection control practices and procedures, unclean and non-sterile environmental surfaces, and/or ill employees. Kenya like many developing countries experience the problem of getting sufficient medical supply and even worse is the disposal of medical waste. This is due to lack of enforcement of legislation for handling, treatment and disposal. Healthcare surfaces and wastes act as the store house of harmful infectious pathogens. Potential health risk includes spreading of diseases by these pathogens and wide dissemination of antimicrobial resistance genes. Antimicrobial resistance in both pathogenic and commensal bacteria is increasing steadily. Failure of antibiotic resistant bacteria containment is responsible for this expansion. The incidence of infections caused by beta lactam resistant organisms due to the production of various enzymes has increased in recent years. Hospital waste can be hazardous to public health and ecological balance since it can contain various kinds of pollutants such as radioactive, chemical and pharmaceutical wastes and also pathogenic microorganisms (WHO, 2002). In Kenya like many developing countries, data is limited to the number of cases registered in health facilities, like Ibn Sina hospital in Rabat (Bakkali et al., 2015) which highlighted the presence of pathogens in distinct areas of the hospital environment like Pseudomonas aeuriginosa, Staphylococcus aureus, Klebsiella species and various gram negative bacilli. Therefore, the present study was done to evaluate the presence of pathogen bacteria in the environment of Kenyatta National Hospital (KNH) and Kikuyu Mission Hospital (KMH) in Kenya and to characterize them for better management of the hospital environment quality.

This constitutes bacteriological analysis and it included cultivation of collected samples from various sites or departments in the hospitals, colony morphology study under different selective media, biochemical tests and confirmatory test using API-20E strips. The study site chosen for this study are KNH and KMH situated in Nairobi County (www.knh.or.ke and www.pceakikuyuhospital.org) in which samples were collected from various sites or departments in the hospitals. The study design used in this research was descriptive cross sectional hospital based study with a sample size of 246. Simple random sampling method was used to collect samples from ten departments in each hospital. Sampling was performed during the morning after the regular daily cleaning. Different surfaces and locations were included (door handles, toilet, bathroom knobs, bed rails, cabinet locks and handles, water dispensers taps, tables including operating tables, scrubber surfaces, sink surfaces, theatre equipment surfaces (for example breathing tubes, infusion pump, aspirators), waste bin surfaces, dump site, door handles and knobs and floor surfaces, etc. Basically, 23 to 24 samples were used, at least, for each sampling site, giving a total of 246 samples in each hospital. Samples collected using sterile polyester fibre tipped applicator swabs (Becton Dickson, Basel, Switzerland) were moistened in 2 ml sterile saline solution and rolled several times over a surface area of around 25 cm. They were then put into sterile tubes, tightly capped and labeled appropriately; similarly, sterile swabs were dipped into drainages and treated as earlier stated. They were transported in ice cooler box to the laboratory for processing. Samples were inoculated on various selective and differential media such as MacConkey, Mannitol salt agar (MSA), Eosin methylene blue (EMB), and Salmonella shigella agar (SS), using the streaking method. Samples were incubated at 36°C (+/- 1°C) in an incubator for 18 to 24 h (overnight). Visible colonies were further sub cultured and incubated for 24 h at 37°C. Isolation and identification of microorganisms were done according to standard procedures. Bacteria were identified by examination of colonial morphology, on appropriate agar media. Samples from MacConkey media were classified as either lactose fermenters or non-lactose fermenters. Gram staining rapid tests (catalase, oxidase, and coagulase) was done to classify the isolates. Various biochemical tests (indole test, methyl red-Voges Proskauer test, citrate utilization and triple sugar iron test, were performed on the isolates to confirm their identities and aid in bacterial species identification as per the protocol by Tolaro (2005). Results of Enterobactericeae were confirmed using API-20E test (Biomeriux, France) (Baron and Finglod, 1996). Confirmation was necessary for future study in antibiotic sensitivity test (Kirby et al., 1966) and detection of Beta lactamase genes from Enterobactericeae. Data analysis was done using SPSS and ANOVA. Scientific approval of the study was obtained from Kenyatta National Hospital Ethics and Review Committee, while ethical clearance to carry out the study was obtained from KNH and KMH hospitals administration. All procedures were carried out in accordance to the standard biosafety guidelines and waste disposal.

Isolation of pathogen strains from hospitals surfaces and hands
Results from this study revealed that a total of 592 sampling were made from various hospital surfaces and hands of health staffs. KNH had the highest number of positive plates which indicated the presence of bacterial with a total of 197 (80.08%), while KMH had 163 (66.26%). There was no statistical significant increase in the prevalence of contamination in private as compared to public hospitals (p = 0.38). Out of those 246 samples, majority of positive plates for the presence of bacterial in both hospitals were from site A (waste from hospital main drainage) with 25 (100%) and site I (orthopedic unit) for KNH with 25 (100%) level of positive growth plates. The least was site C (operation theatre) for both hospitals; KNH had only 6 plates with positive growth out of 25 (24%), while KMH had 9/25 (36%) as indicated in Table 1. Among the 360 positive samples, 471 pathogens strains were isolated, comprising of Gram negative bacteria which were more in most departments, (341, 72.3%) than the Gram positive bacteria (130, 27.7%). 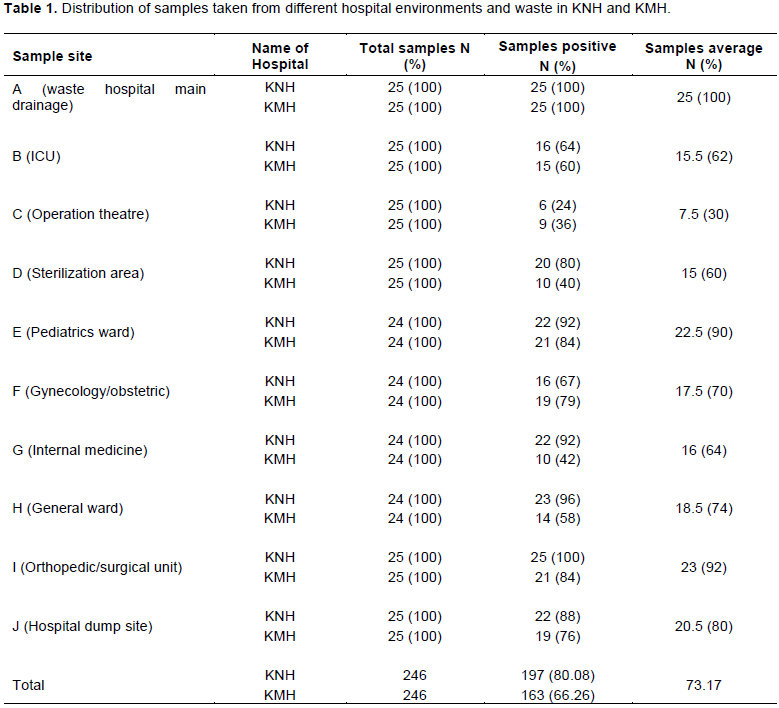 The distribution of strains according to samples origin
The distribution of strains isolated from surfaces and hands of health personnel and their detection rates were reported in figures and it shows that 471 were isolated from surfaces of various locations in different surfaces and personnel hands. Characterization of strains isolated showed clearly a high prevalence of Gram negative bacteria. Results clearly demonstrate the presence of both Gram positive and Gram negative bacteria with the predominance of Providentia species (21.01%), S. aureus (18.47%), Escherichia coli (12.95%), other Gram negatives such as Roultella ornithylitica, Ochrobactrum anthropic, Pantoea species (9.55%), Pseudomonas species (9.34%), coagulase negative Staphylococcus (CONS) (9.12%), Serratia species (6.58%), Klebsiella species (6.36%), Proteus species (4.03%), and Enterobacter species (2.54%) as shown in Table 2. Most of the frequently isolated bacterial included E. coli in waste   water   main   drainages   (A)   while   Providentia, Pseudomonas, Serratia and Klebsiella species were the most abundant in ICU, while S. aureus and other coagulase negative Gram positives were abundant in ICU (B), general ward (H). Moreover, the percentage of detection of Gram positive and Gram negative bacteria isolated at different locations is summarized in Figure 1. For both Gram negative and Gram positive bacteria, the main infected surfaces were the door handles and nurses hands surfaces representing the major reservoirs of pathogens. Moreover, Gram negative bacteria were predominant in sinks and waste waters, whereas Gram positive bacteria prevail in samples taken from door handles and nurses hands surface as reported in Table 2.
Pseudomonas species was most abundant in sinks (20.4%) followed by operation table (18.18%) (Table 2). In operation table (26.66%), Klebsiella pneumoniae was most abundant followed by door handles (20%). E. coli was found mostly in nurses’ hands surface (NHS) (22.9%), followed by nurses’ staff table (NST) (19.6%). Proteus  vulgaris  was  found  in  stretchers  and  elevator buttons while Enterobacter cloaca was abundant in nurses’ hands surfaces. Species of Providentia were mostly found in door handles at 14.14%, Serratia species were most abundant in waste water samples and door surfaces at 22.58% in both cases. Other Gram negative isolates were found in waste water and door surfaces. S. aureus was abundantly found in nurses’ hands surface in about 21.83%, while other coagulase negative Staphylococcus was most abundant in elevator buttons (39.53%) and door handles in 25.58% occurrence (Table 2). 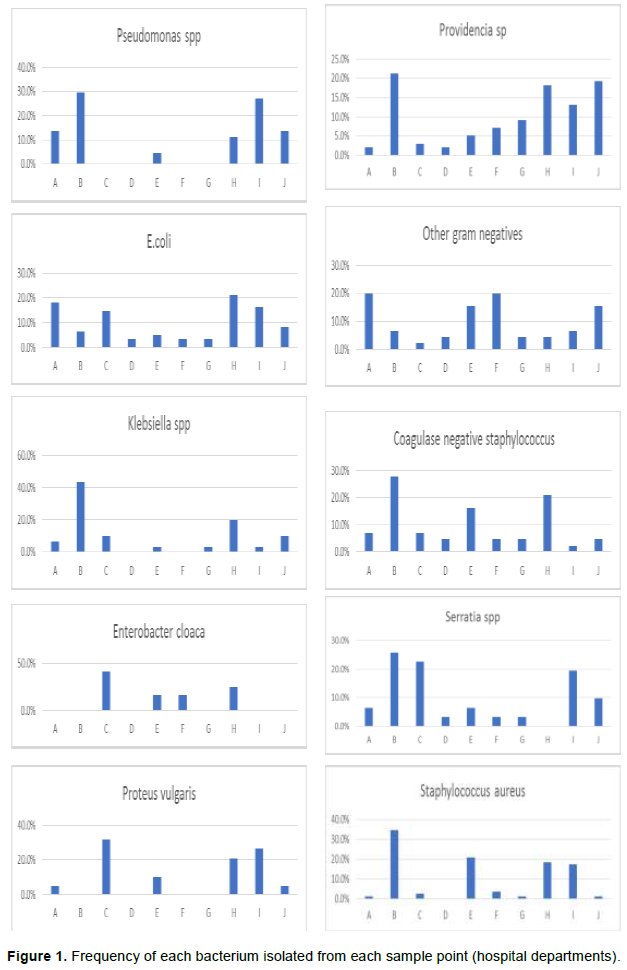 The authors acknowledge fundings from National Council of Science, Technology and Innovation.