Lapachol is a natural naphthoquinone with important activity due to its chemical and structural properties. Nine semisynthetic derivatives of this substance were tested against strains of Staphylococcus spp. to identify the antimicrobial activity of these compounds. Only β-lapachone and oxime of lapachol showed good activity against the strains studied. The minimum bactericidal concentration values ranged from 62.5 to 15.62 μg/mL. The antimicrobial activity of these substances may be related to functional groups characteristics by technique Fourier transform infrared spectroscopy. There is great antimicrobial potential mainly related to β-lapachone and to oxime of lapachol, instigating further studies on the mechanisms of action.

The biome, Caatinga is considered unique and exclusive to Brazil. This biome presents a vast biodiversity and genetic repertory of plant species with potential for phytochemical production and study of substances with biological activity (Trentin et al., 2011). The species of the genus, Tabebuia spp., Bignoniaceae, are observed in areas such as Caatinga, Cerrado, Amazon and Pantanal, being utilized for ornamental  medicinal  and  construction  purposes (Oliveira et al., 2006).
Among the metabolites extracted from this genre, 2-hydroxy-3- (3-methyl-2-butenyl)-1,4-naphthoquinone known as lapachol is a natural naphthoquinone obtained from plants of heartwood family. This substance is known for its activity due to its anticancer, anti-inflammatory, analgesic, antibiotic (Staphylococcus aureus/ MRSA), anti-malaria,  antitrypanosoma  and  antiulcer   properties(Araújo, 2002; Barbosa and Neto, 2013; Fonseca, 2003; Araújo et al., 2014). These numerous activities are related to chemical and structural details of naphthoquinones. Thus, some researchers are developing structural changes in the lapachol molecule to improve its biological activity (Araújo, 2002; Macedo et al., 2013).
The pathogenesis of bacteria belonging to the genus Staphylococcus is mainly associated with the formation of abscesses and festering wounds. This is due, for example, to the production of toxins (Wu et al., 2016). However, the formation of biofilm, a structure formed by a mucopolysaccharide matrix, is still considered one of the main forms of pathogenesis (Paharik e Horswill, 2016; Park et al., 2012).

The semisynthetic derivatives of lapachol
Derivatives of 2-hydroxy-3-(3-methyl-2-butenyl-1,4-naphthoquinone) (lapachol) are shown in Figure 1. All the solvents and reagents were obtained with analytical purity and provided by Group of Chemistry Applied to Pharmacy (GQAF) of the Federal University of Sao Francisco Valley. The substances were developed from the molecular modification to potentiate the biological activity of natural ones (Araújo et al., 2014). 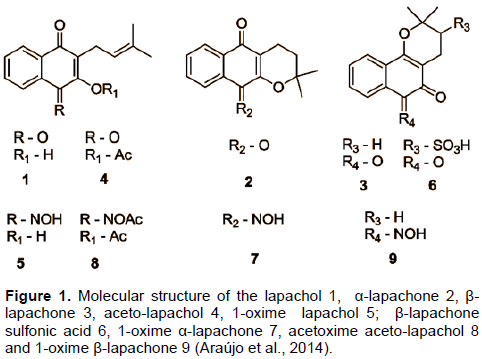 Viability of the microorganisms
Clinical isolates of S. aureus (in number of five), including ATCC (25923) from human blood cultures of Collection Culture Microbiology Laboratory of the Federal University of Santa Maria, were maintained on nutrient agar. (BHI Agar - Brain Heart Infusion) were stored  at  refrigerated  condition  (± 4°C)   in   the   Laboratory  of Immunology and Microbiology Federal University of São Francisco Valley - UNIVASF, located on the  Agrarian Sciences Campus of UNIVASF in Petrolina/PE/Brazil.
Antimicrobial activity
The minimum bactericidal concentration (MBC) of the semisynthetic derivatives of lapachol 1 and standard antibiotics (Oxacillin) was performed through the microdilution technique (CLSI, 2012). A stock solution of 2 mg/mL of the diluted substance was prepared in dimethylsulfoxide (DMSO) and autoclaved distilled water (1:1). In 96-well microplate was added 200 μL broth Mueller Hinton (MH) in additional 200 μL of the solution containing the stock solution. Then serial dilution was performed, obtaining concentrations of 1000, 500, 250, 125, 62.5, 31.25, 15.62 and 7.81 µg/mL. The experiment was made in triplicate and oxacillin was used as positive control. The diluent was used as a negative control to verify if there is no interference in the antimicrobial activity. At the end the microplates were incubated for 24 h at 37°C. Subsequently an aliquot (10 μL) was drawn to determine the lowest concentration capable of killing the bacteria.
Structural characterization by Fourier transform infrared spectroscopy (FTIR)
For analysis by FTIR, 1 mg of the substance that presented antibacterial activity to all isolates tested was macerated in a mortar with 100 mg of KBr and then pressed in at 30 kN for five minutes. The resulting pellet was analyzed on a FTIR Prestige-21 Shimadzu by comparison with reference spectra obtained using pure KBr pellets.

Minimum bactericidal concentration (MBC)
The MBC  is  defined as the lowest concentration necessary to kill 99.9% bacteria in the planktonic growth (Fletcher et al., 2014). In studies involving naphthoquinones, it was observed that these compounds exhibit improved pharmacological properties, including antitumor, anti-inflammatory, anti-trypanosome, antimalarial and antimicrobial activity (Kumagai, 2012). Among the nine semi-synthetic compounds tested, only the lapachol, the α-lapachone, the β-lapachone and the lapachol oxime present antimicrobial activity against Staphylococcus aureus. In spite of this aspect, only the β-lapachone and lapachol oxime presented favorable results in relation to concentration and activity against all isolates tested, showing the potential of these two substances (Table 1).

The lapachol and α-lapachone did not show good antimicrobial against S. aureus strains tested presenting MBC values of 1000 and 500 μg/mL, respectively. However, these values were not observed for all isolates tested. Relative to the β-lapachone and lapachol oxime, it was observed a more pronounced effect of antibacterial activity, with values ranging from 62.5-15.62 and 62.5-31.25 μg/mL, respectively. Oxacillin, standard antibiotic was not effective against the bacteria tested due to the concentration used in the inhibition of growth of bacteria: it was superior to antibiotic breakpoint (≥4 μg/mL) (CLSI, 2012). The only strain which has demonstrated sensitivity was the ATCC tested. This result is important with regard to the emergence of resistance to this antibiotic. Coli et al. (2009) characterized 37 strains of S. aureus/MRSA in relation to resistance to oxacillin. In this study, only 5.6% of the bacteria tested were classified as BORSA (borderline) and MRSA. This shows the clinical importance of this study which allows a focused therapeutic treatment in hospital infections cases (Colli et al., 2009). This studies also corroborate with Macedo et al. (2013). These evaluated the antimicrobial activity of lapachol, α-lapachone, β-lapachone six antibiotics (Ampicillin, Amoxicillin/Clavulanic Acid, Cefoxitin, Gentamicin, Ciprofloxacin and Meropenen) against 20 strains of S. aureus that presented phenotypic resistance when subjected to the disk diffusion method. In this work, the β-lapachone as compared to other substances (lapachol and α-lapachone) showed a strong antibacterial effect against MRSA strains (methicillin-resistant S. aureus) with values of 8-32 μg/mL in the Minimum Inhibitory Concentration (MIC) (Macedo et al., 2013).
Other studies involving in vitro antimicrobial activity of phytochemicals and synthetic products of bacteria, including Staphylococcus spp. and yeast fungi showed results similar to ours. The majority of the analyzed derivatives showed activity against the tested microorganisms, except for the yeast.
The lapachol and it’s a nalogs, including α-lapachone and β-lapachone, were active against 12 strains of S. aureus, including ATCC 25923 at concentrations of 100 to 50 μg/mL (Antunes et al., 2006). However, the strains presented sensitivity to the substances tested, that only reinforces the importance of this substance for therapeutic against this type of bacteria resistant to antibiotics used in clinical practice especially when evaluating their activity against strains derived from blood cultures as they may present more pathogenic when assessing the degree of infections in hospitals. It is noted that the natural products have the potential to control the growth of pathogens of clinical interest, such as Staphylococcus spp., which allows for new therapies for the development of antimicrobial drugs.
In view of these results, it was observed that the naturally occurring product, both pure compounds as standardized herbal extracts, have the potential to control the growth of pathogens of clinical interest, such as Staphylococcus spp., which enables new therapeutic alternatives for the development of antimicrobial drugs (Cragg and Newman, 2013; COS et al., 2006; Taylor, 2013).
The antimicrobial activity of these substances may be related to molecular characteristics of these substances. In this case, the generation of reactive oxygen species (ROS) due to bioreduction in the region quinolinic by specific enzymes and the interaction with topoisomerase is, until the moment, a possible antibacterial action. There are evidences that the participation of enzyme NAD (P) H: quinone oxirreductase-1 (NQO1) in the activation of β-lapachone during the process of apoptosis, contributing to the treatment of tumor cells (Ferreira et al., 2010; Kumagai et al., 2012).
Structural characterization by Fourier transform infra-red (FTIR)
Considering that only β-lapachone and lapachol oxime showed good antimicrobial activity, a FTIR analysis was performed in order to correlate its action with a presence of functional groups. As shown in Figure 2, the FTIR spectrum of β-lapachone was characterized by the presence of carbonyl groups (C = O) in the region 1820-1660 cm-1. The conjugation results in decreased frequency of vibration of the carbonyl (± 30 cm-1 relative to base value) is due to reduction of the double bond character and can shift the absorption to the right. The six members ring for not present and "angular tension" does not affect the frequency of carbonyl groups.

Furthermore double and/or presence of the aromatic ring (C = C) are in the range of the 1650 to 1450 cm-1. The aromatic carbons (C-H) are located to the left of 3000 cm-1. The two groups methyl (-CH3) generate a strong peak near 1375 cm-1. To stretch the ether group (C = O) is usually the most prominent band of the spectrum 1300-1000 cm-1 showing itself like two strong bands one at each end of the area (Pavia et al., 2001).
In relation to the infrared spectrum lapachol oxime, it is observed a strong peak near 1375 cm-1 relative to the methyl groups (-CH3). In methylene groups (-CH2-), absorption corresponds to the deformation generally around 1465 cm-1. The double bonds and/or presence of the aromatic ring (C = C) are in the region of 1650-1450 cm-1. In the carbonyl group, a strong absorption is observed in the region of 1820-1660 cm-1 with influence of conjugation generated by resonance in the six-membered ring. Oximes (R-CH = N-R) have an absorption in the region of 1690-1640 cm-1 (Figure 2).
In these analyzes by FTIR, a structural characterization of the studied substances was observed, reinforcing their biological potential in relation to their mechanism of action. The carbonyl grouping conjugated to a six-membered ring with two oxidative electrons gives these derivatives of Lapachol oxidative properties. In general, they can react with biological systems as well as electron transferors generating superoxide radicals and hydrogen peroxide as electrophilic agents forming covalent bonds with functional nucleophilic groups on bioactive molecules (Kumagai et al., 2012). Therefore, the use of these as potential antimicrobial agents is necessary mainly in the context of the emergence of cases of resistant bacteria.