Methicillin-resistant Staphylococcus aureus (MRSA) continues to be a global problem in infection control. The highest proportions of MRSA are reported by Jordan, Egypt and Cyprus investigators, where more than 50% of the invasive isolates are methicillin-resistant. The aim of this work was to study the prevalence, antibiotic sensitivity and genetic discrimination of MRSA in Egypt. Microbiological identification was done using Gram stain, catalase, coagulase and mannitol fermentation along with biochemical identification by analytical profile index (API) tests. Molecular identification was conducted by the polymerase chain reaction (PCR) targeting 16S ribosomal RNA and the nuc genes. Additionally, identification of methicillin-resistant S. aureus (MRSA) was performed by the amplification of 310 bp of the mecA gene. Antibiograms were performed for all isolates. Only 73 isolates out of 166 were oxacillin resistant. The percentage of resistant isolates to erythromycin, rifampicin, vancomycin, Ofloxacin, gentamycin, Amoxicillin clavulanic acid, ciprofloxacin, chloramphenicol, trimethoprim sulfamethoxazole, teicoplanin and tetracycline were 58, 32.50, 2.4, 45.18, 37.9, 39.7, 23.5, 21.6, 40.3, 0 and 39.1%, respectively. MRSA isolates were subdivided into eight biotypes according to their resistance pattern. Random amplification of polymorphic DNA (RAPD) and repetitive sequence DNA (REP) were performed on samples representing each biotype.
Key words: Methicillin-resistant Staphylococcus aureus (MRSA), nuclease, mecA, 16S rRNA, random amplified polymorphic DNA (RAPD), polymerase chain reaction (PCR). 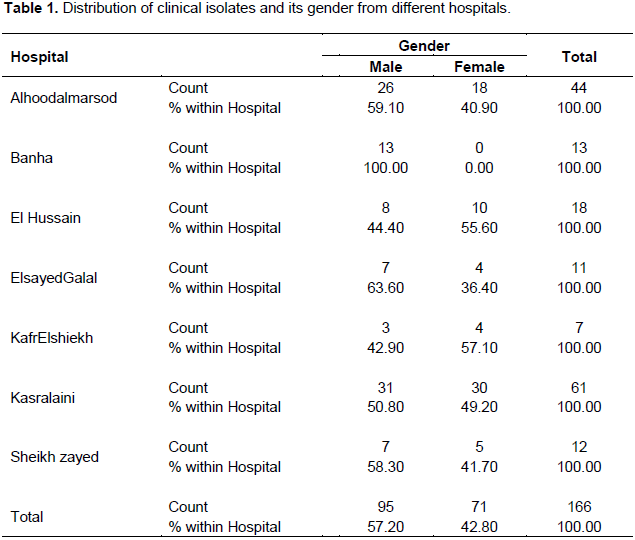 Isolation and identification of staphylococci
The swab specimens were inoculated on nutrient agar and incubated at 37°C for 24 to 48 h; thereafter the colonies were streaked with sterilized wire loap on mannitol salt agar so as to obtain discrete colonies. The plates were incubated for 24 h at 37°C under aerobic conditions after which the cultured plates were examined recording the appearance, size, colour, and morphology of the colonies.
Gram stain reaction, catalase test and coagulase test were carried  out.   Isolates   that   were   Gram-positive   cocci,   catalase  positive, and coagulated human plasma were considered S. aureus in this study (Chigbu and Ezeronye, 2003).
Preparation and examination of gram stained films of the collected isolate
Gram stain was performed according to Isenberg (1992).
Growth on mannitol salt agar
Isolates which proved to be from Staphylococcus species were subcultured on mannitol salt agar plates. S. aureus ferments mannitol changing the medium colour from red to yellow (Pumipuntu et al., 2017).
Biochemical tests
Catalase test
The catalase test involves the addition of hydrogen peroxide to a culture sample or agar slant. If the bacteria in question produce catalase, hydrogen peroxide will be hydrolyzed and oxygen gas will be evolved. A positive test was denoted by evolution of gas resulting in bubbles formation (Kloos and Schleifer, 1986).
Coagulase test
Colonies from different samples were inoculated onto 0.5 ml of rabbit plasma diluted by 1/10 using saline and incubated at 37°C for 1 to 4 h.  A positive test was denoted by clot formation in the test tube after chosen time intervals (Sperber and Tatini, 1975).
Analytical profile index (API)
API staph (Bioumerieux, Inc., Marcy E'toile, France) was used to confirm identification of S. aureus with the test performed as described by Radebold and Essers (1980).
Antibiotic sensitivity test
166    staphylococci    strains   were  examined  in  vitro  against  12 different antibiotics. The antibiotic discs were obtained from Oxoid, UK including: Rifampicin, Amoxicillin clavulanic, Chloramphenicol, trimethoprim Sulfamethoxazole, Ofloxacin, Tetracycline, Erythromycin, Gentamicin, Vancomycin, Teicoplanin and Oxacillin. Approximately 108cfu/ml bacterial inoculums were prepared in 5 ml Muller-Hinton broth and inoculated on nutrient agar plates after incubation at 37°C overnight. 3 to 5 isolated colonies were picked from the plate containing the test organism. The turbidity was adjusted the same as the McFarland No. 0.5 standard. Thereafter, swab was streaked onto the surface of the Mueller-Hinton agar (3 times in 3 quadrants) and left for 5 to 10 min to dry the surface of agar. The chosen drug-impregnated discs were placed onto the surface of the inoculated agar plate which was then inverted and incubated at 35°C for 18 to 24 h (Drew et al., 1972).
Interpretation of antibiogram
According to CLSI, the results of antibiogram were interrelated as shown in Table 2.

PCR amplification
Extraction of chromosomal DNA
This was carried out using the traditional method. A total of 5 ml in 24 h broth culture isolates was centrifuged for 10 min at 12000 rpm. The pellet was washed twice by 50 μl distilled water. The cell suspension was heated directly at 100°C for 10 min in a heat block to break the cell membranes and then cooled in the refrigerator for 5 min. Finally, the cell suspension was centrifuged for 5 min at 12000 rpm and the supernatant containing chromosomal DNA was collected.
Amplification of 16SrRNA, nuc, mecA, RAPD, REP1R and REP2 genes
The reaction mixtures were prepared following the protocols described in the Mastermix pcr kits. Thereafter, PCR was performed in a thermal cycler using the following settings; Stage 1 (x1): initial denaturation at 94°C for 5 min; Stage 2 (x35): secondary denaturation at 94°C for 30 sec, annealing at 55°C for 1 min and extension at 72°C for 1 min; Stage 3 (x1): a final extension at 72°C for 10 min.  Other changes made for amplification of specific genes are as stated in Table 3. 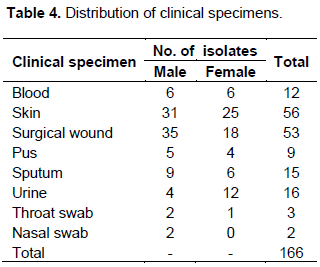 Morphological characteristics
Gram staining and microscopical examination of the recovered isolates revealed that 166 isolates were Gram positive cocci arranged in bunch. Staphylococci found as gram-positive bacteria occur in microscopic clusters resembling grapes. They form large round golden-yellow colonies.
Growth on mannitol salt agar (MSA)
All isolates grown on MSA were mannitol fermenters and are presumed to be S. aureus.
Biochemical tests
Catalase and coagulase tests showed that all  recovered isolates were catalase and coagulase positive.
Identification of Staphylococcus aureus using API staph
Based on the above tests, all clinical isolates were presumptively identified as S. aureus. The identity of these isolates was confirmed using API Staph kits.. All tested isolates were identified as S. aureus and gave positive results with GLU, FRU, MNE, MAL, LAC, TRE, MAN, NIT, PAL, VP, SAC, NAG, ADH and URE, however showing negative results with XLT, MEL, RAF, XYL and MDG. Identification was made using the Analytic Profile Index with API Staph (bioMerieux) system. The pattern of the reactions are obtained and coded into 7-digit numerical profile. All 166 S. aureus isolates gave analytic profile index of 6736153. Upon performing API on isolates, they were all S. aureus. All API numerical profiles for 166 isolates showed very good identity of S. aureus similar to each other in the test results.
Antimicrobial susceptibility of the isolates to different antibiotics
Antibiogram for isolates
Patterns  of susceptibility to antimicrobial agents are used  for typing because staphylococci isolates can be broken down into separate groups. The susceptibility of S. aureus isolates to different antibiotics commonly used for S. aureus infections, namely, Rifampicin, Amoxicillin clavulanic ciprofloxacin, Chloramphenicol, Trimethoprim sulfamethoxazole, Ofloxacin, Tetracycline, Erythromycin, Gentamycin, Vancomycin, Teicoplanin and Oxacillin was determined.
An antibiogram was performed for all isolates which showed the characteristics of S. aureus. The percentage resistance (% R) shows the degree of multiresistance of the isolate. The distribution of antibiotic resistance within S. aureus, either sensitive or resistant to Oxacillin was shown on Table 5. The isolates which showed resistance to oxacillin were considered MRSA as shown in Table 7, while isolates sensitive to oxacillin were considered MSSA as shown in Table 8. In many cases, the resistance to certain antibiotics exceeded 40% of the isolates Table 6. The percentage resistance to Erythromycin was 58%, Rifampicin (32.50%), Vancomycin (2.4%), Ofloxacin (45.18%), Gentamycin (37.9%), Amoxicillin clavulanic acid (39.7%), Ciprofloxacin (23.5%), Chloramphenicol (21.6%), Trimethoprim sulfamethoxazole (40.3%), Teicoplanin (0%), and Tetracycline (39.1%) as previously shown in Table 5. 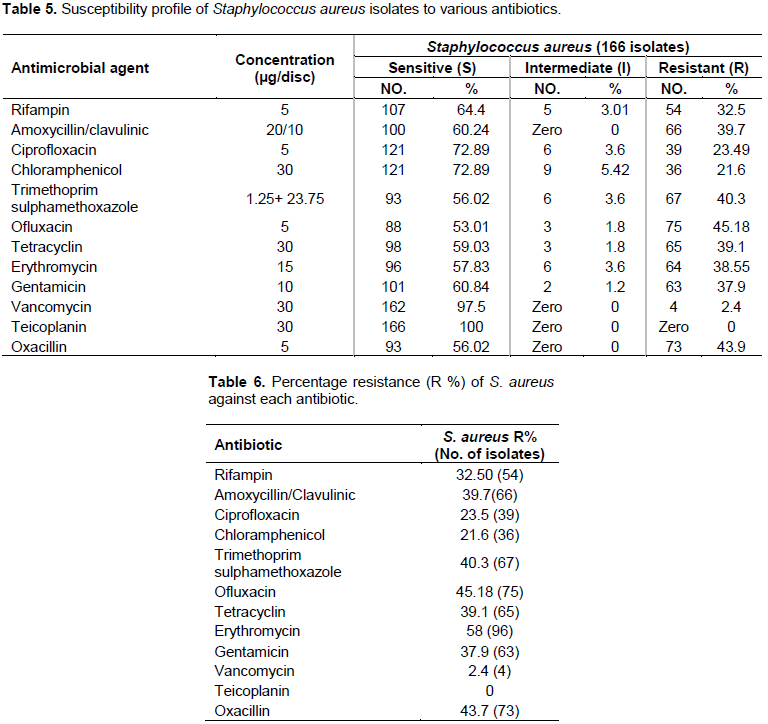 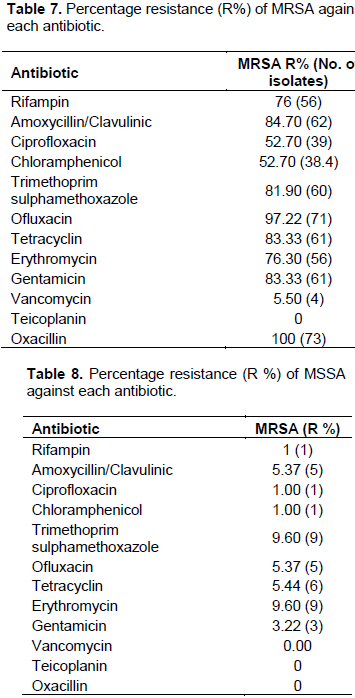 The percentage resistance of MRSA against each antibiotic from different classes which in many cases exceeded 70% resistance to Oxacillin was found to be 100% while resistance to Teicoplanin was 0% and Vancomycin was 5.5%. All isolates were sensitive to Teicoplanin with R% equal to 0% while 43.7% isolates remained resistant to Oxacillin and were considered as MRSA. These results are summarized in Table 6. On the other hand, 56.3% of the S. aureus isolates were oxacillin sensitive (MSSA) and their antibiogram results are summarized in Table 8. Based on the results of antibiotic sensitivity, 73 isolates were assumed to be MRSA (43.7% of the S. aureus isolates). Total number of MRSA isolates versus total number of MSSA isolates collected from each clinical specimen (blood, throat swabs, pus, skin, surgical wound, urine, nasal swab and sputum) is shown in Table 9. All isolates obtained from both nasal and throat swab were Oxacillin resistant according to the results of antibiogram. 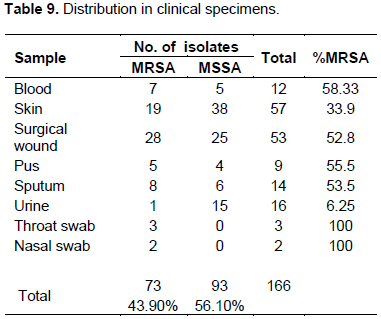 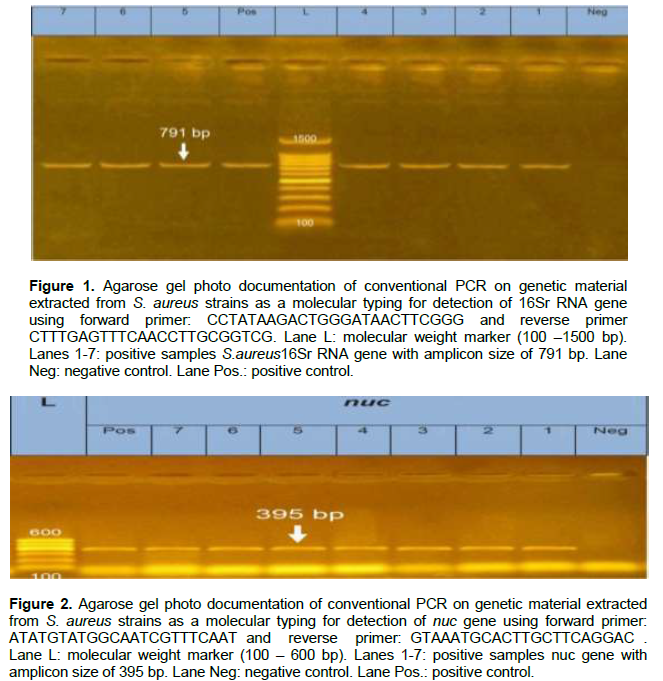 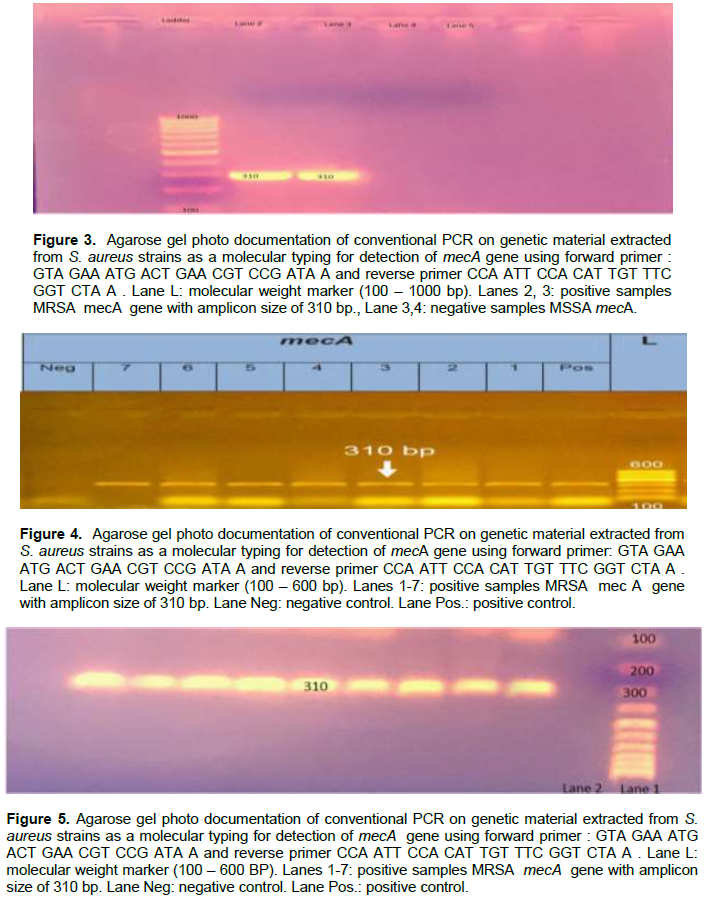 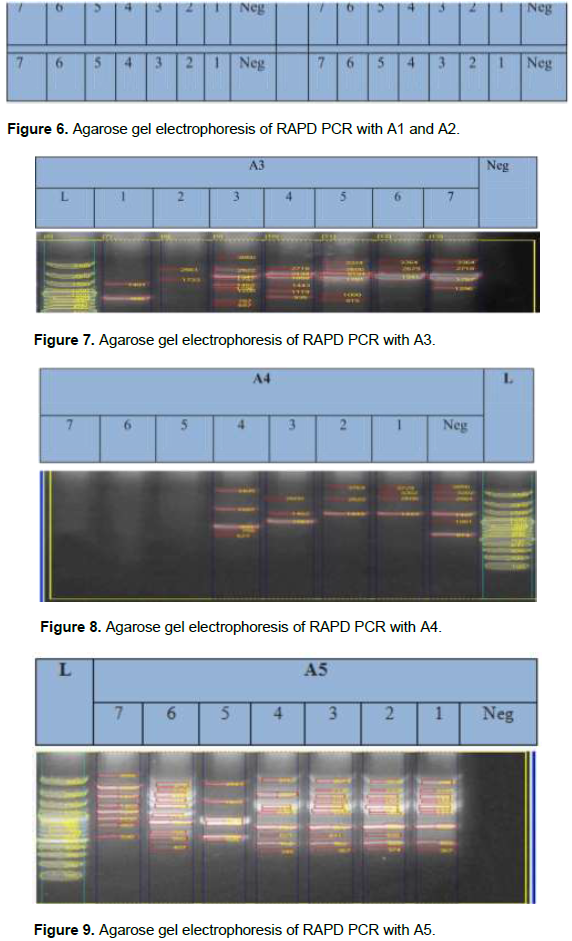 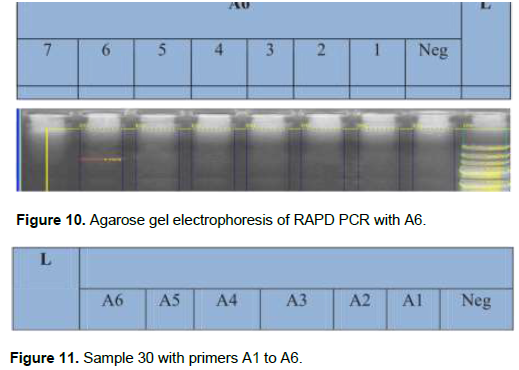 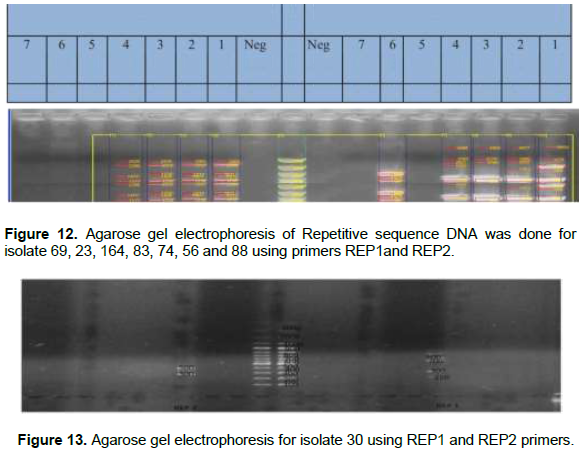 Statistical analysis
Relationships  between  different factors with MRSA were presented as follows: MRSA and site of infection (Tables 10 and 11); MRSA and gender (Table 15), MRSA and hospitals (Table 12) and relation of hospitals with infection site (Table 16). 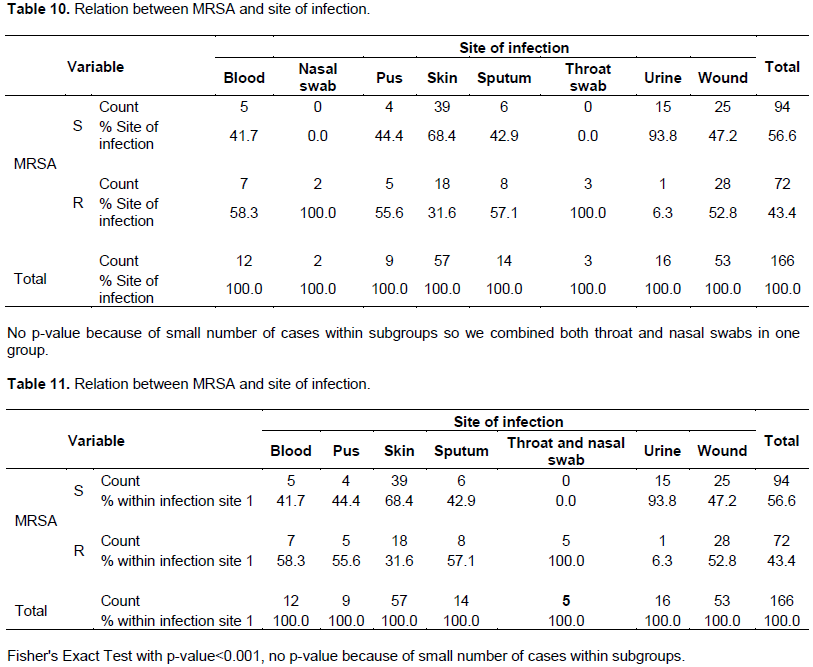 MRSA is a serious problem facing hospitals all over Egypt which needs more attention. So, further studies were recommended as detection of virulence genes and require sequence analysis to methicillin resistance genes which make these strains capable of being multiple multidrug resistances.
Characterization of the antibiotic resistance and sensitivity pattern against different antimicrobials revealed that MRSA was highly sensitive to Teicoplanin (S% was 100%) and Vancomycin (S% was 97.5%), while antibiotic resistance other than Oxacillin was found in 43.9% of the isolates showing multiple drug resistance.
Classification of MRSA samples according to resistance pattern into eight biotypes (then RAPD and REP PCR)  were  done for a sample from each biotype to check for genetic relatedness. Molecular techniques were found to be more rapid, highly sensitive and detect non-viable organisms while culture was found to be 100% specific for detection of MRSA.