The antimicrobial inhibitory effects of five common antiseptics [Chlorhexidine (CHX), Hydrogen peroxide (H2O2), Iodine, Ethanol and Dettol] were investigated using agar well diffusion method. The organisms used included methicillin-resistant Staphylococcus aureus (MRSA), Acinetobacter baumannii, Escherichia coli, Klebsiella species and Pseudomonas aeruginosa. The undiluted concentrations of the antiseptics showed variable zones of inhibition against the tested organisms, on MRSA it ranged from 25 mm (CHX) to 30 mm in other antiseptics, on A. baumannii 20 mm (CHX) to 34 mm Dettol, on E. coli 20 mm Dettol to 38 mm (H2O2), on Klebsiella spp. 20 mm Dettol to 24 mm (CHX), whereas on P. aeruginosa it ranged from 13 mm Iodine to 30 mm (H2O2). The minimal inhibitory concentration (MIC) of chlorhexidine concentration against MRSA and P. aeruginosa was 10%, while A. baumannii was 20%. All the study bacteria were resistant to ethanol by all concentrations. The result showed that H2O2 was the most effective antiseptics than the others followed by CHX. The study bacteria were found to be crucially susceptible to the routinely used antiseptics tested. Though, there is the need for continuous surveillance for the detection of emerging resistance pattern.

Nosocomial infections (NI) are referred to those infections occurring after 48 h of hospital admission, or 3 days of discharge (Kouchak and Askarian, 2012).  About  10%  of the hospital admitted persons will have NI, and it has been shown that NI is usually associated with prolong length of hospital stay, increased  costs,  and  resulted  in significant morbidity and mortality (Al-Talib et al., 2010; Raines and Rosen, 2016). Currently, NI has become a trend in healthcare setting globally including Malaysia. Nosocomial bacteria including methicillin-resistant Staphylococcus aureus (MRSA) and Pseudomonas aeruginosa, have become endemic in many health care centres. Infections with these organisms are often difficult to treat, owing to a reducing armamentarium of active antiseptic agents. Also, hospital associated infections involving these and other microorganisms are associated with considerable morbidity and mortality (Climo et al., 2013). Antiseptics and disinfectants had a fundamental role in infection control practices and help in the avoidance of NI. Antiseptics are used in sterilization of medical and surgical instruments and wards equipment. However, extensive using of different antiseptics might lead to the development of resistant pathogens that eventually makes the antiseptics become ineffective (Matthew et al., 2017). Different bacteria showed variable degrees of resistance to antiseptics (McDonnell and Russell, 1999); although, Gram-negative bacteria are commonly more resistant than Gram-positive bacteria to antiseptics (Russell, 1999). Antiseptics are mainly used to inhibit the growth of microorganisms or to interrupt the route of transmission of germs between the infection source and healthy subjects (Mbajiuka et al., 2015). Previous study by El-Mahmood and Doughari (2009) revealed that five frequently used antiseptics were contaminated with nosocomial Gram positive and negative bacteria, therefore, antiseptics used in hospitals and laboratories must be evaluated regularly to determine their potency validation to remove or inactivate known pathogens from inanimate objects (Sridhar, 2012). Chlorhexidine is an antiseptic with a broad-spectrum activity against many organisms, including S. aureus and Enterococcus species. Chlorhexidine is a cationic polybiguanide that has antibacterial effects and has been used as antiseptic in clinical practice (Mullany et al., 2006). Chlorhexidine salts dissociate and release the positively charged chlorhexidine cationic molecules which bind to negatively charged bacterial cell walls and causing bactericidal effect (Cheung et al., 2012). Using chlorhexidine at low concentrations resulted in a bacteriostatic effect while at high concentrations it can cause membrane disruption and cell death. Chlorhexidine lasts much longer than other antiseptics, therefore, it is often combine with alcohol in skin preparation to reduce microbial burden on patients’ skin and prevent secondary bacterial infections (Climo et al., 2013). Previous studies have found that daily bathing with 2% chlorhexidine-im-pregnated washcloths reduced the incidence of NI infections by 60% (Climo et al., 2013; Vernon et al., 2006).
Hydrogen peroxide (H2O2) plays a central role in sterilization and disinfection of critical items in Malaysian hospitals. Also H2O2 is the most effective antiseptic used in hospitals since the 1920s because it kills bacteria cells by destroying their cell walls. H2O2 has “hydroxyl radicals” a potent oxidant, which react with macromolecules such as membrane lipids and DNA thus resulting in bacterial death (Shahriari et al., 2011). In its pure form, H2O2 is a colourless liquid, slightly more viscous than water. H2O2 is used in hospital and ICU in a vapour form to decontaminate rooms from multi-drug resistant, also used to sterile surfaces, including surgical tools (Lemmen et al., 2015).
Nowadays most of the hospital used Iodine (povidone iodine) which is a natural dark violet, non-metallic solution that considered among the most effective skin antiseptics and used widely in minor wound cleaner. Iodine has excellent bactericidal, fungicidal, tuberculocidal, virucidal and sporicidal properties (Bouaziz et al., 2016). Iodine can penetrate the cell wall of microorganisms quickly, and the lethal effects are believed to result from disruption of protein and nucleic acid structure and synthesis (McKeen, 2012). Although, povidone-iodine has a rapid bactericidal effect than chlorhexidine, but povidone-iodine has not been shown to have a persistent effect like chlorhexidine (Bigliardi et al., 2017).
Ethanol is used extensively in the homes, healthcare settings and laboratories. It consists of two water-soluble chemical compounds ethyl alcohol and isopropyl alcohol that have germicidal characteristics. Alcohols showed bactericidal rather than bacteriostatic activities against vegetative forms of bacteria but do not destroy bacterial spores. Hence, alcohol is not generally being used as sterilizing material instrument (Tuhina et al., 2013). Both ethanol and isopropanol have similar modes of action against different types of microorganisms, however isopropyl alcohol is likely to be more effective than ethanol against bacteria, while the reverse appears to be true for viruses (William et al., 2008). Dettol is another antiseptic, which is used in hospitals and homes; it is available in multi-forms like soap, spray, hand wash, surface wipes, mildew remover and a bathroom cleaner. The active ingredient in Dettol is para-chloro-meta-xylenol. Dettol has greater effects against Gram-positive bacteria and works by disruption of the cell wall and inhibiting the function of enzymes (Mahon et al., 2014).
The aim of this study was to evaluate the antimicrobial effects of some commonly used disinfectants and antiseptics against common bacteria that cause nosocomial infections in hospitals.

Antiseptics
This study was conducted in microbiology laboratory at Institute of Medical Molecular Biotechnology, Faculty of Medicine, Universiti Teknologi MARA (UiTM) from February to August 2017. In this study, the same antiseptics which were already used by different wards and Operation Theater in UiTM Private Specialist Centre (PPP-UiTM), Sungai Buloh, Selangor, Malaysia were used. Five commonly used antiseptics and disinfectants were evaluated in this study including Heptin [Chlorhexidine Gluconate 0.5% in alcohol 70%  Nanz  Med  Science   Pharma,   Himachal   Pradesh,   India)], Hydrogen peroxide 6% w/v (Wellmex Sdn Bhd, Selangor, Malaysia), Iodine [Povidone Iodine 7.5% w/v (Thermalife, Pinang, Malaysia)], Alcohol [Ethanol 70% v/v Fisher, Loughborough, UK)] and Dettol [Chloroxylenol 4.8% w/v (Reckitt Benckiser, Hull, UK)].
Disinfectant dilution methods
A series of decreasing concentrations of the antiseptics were obtained using serial dilution method in which the original concentration of antiseptic was considered 100%, the subsequent concentration was prepared by adding 9 ml of antiseptic into a tube with 1 ml distilled water to give 90% concentration. Then the rest concentrations were prepared in descending same manner. The antiseptics concentrations used in this study range from 100 to 10%.
Cultivation of bacterial strains
Five bacterial types isolated from UiTM Private Specialist Centre were used in this study including methicillin-resistant S. aureus (MRSA), Acinetobacter baumannii, Escherichia coli, Klebsiella species and P. aeruginosa. Each bacterium was cultured in nutrient agar for 24 h at 37°C. All tested bacteria were maintained in nutrient broth at 4°C and subcultured on Luria Bertani agar plates 24 h prior to any antimicrobial test. Luria Bertani broth was used for all antibacterial testing.
Antimicrobial susceptibility assays
Well diffusion method
Agar well diffusion method was used to determine antimicrobial activity of different antiseptics. Two bacterial colonies were inoculated in Tryptic soy broth for 3 h at 37°C and turbidity was adjusted in phosphate buffered saline to 0.5 McFarland’s scale. 100 μl of bacterial broth was spread on Muller-Hinton agar plates containing ten 6 mm wells. Thirty microliters of each different concentration (10, 20, 30, 40, 50, 60, 70, 80, 90 and 100%) of each antiseptic was poured into each well and these plates were incubated at 37°C aerobically for 24 h. The diameter of the zone of growth inhibition around the wells were measured in millimeters and recorded. Wells containing antiseptics which showed no inhibition zones were considered as negative results. Antibiotic disc was used as positive control.
Minimal inhibitory concentration (MIC)
Broth dilution assay was used to determine the MIC of different antiseptics against bacteria causing nosocomial infections as recommended by the Clinical Laboratory Standards Institute (Wayne, 2012). The concentrations of the antiseptics tested ranged from 100 to 10%. This test was performed in sterile bijou bottles which were loaded with 100 µL of each antiseptic dilution into each bottle.
Bacterial inoculums (100 µL) containing 5 × 105 CFU of each microorganism were added to each bottle (European Society of Clinical Microbiology and Infectious Diseases, 2003). In each panel of the tested antiseptic, a positive control (without antiseptic) and negative control (no inoculum) were added. All bottles were aerobically incubated at 37°C. After incubation for 24 h, the bacterial growth was assayed by its visible turbidity. The highest dilution of the antiseptic which showed no visible bacterial growth and no turbidity in bijou bottle was considered as MIC. After 24 h of incubation, 100 µL of each mixture was pipetted and  inoculated  on blood agar and spread uniformly with the sterile spreader and again incubated for 24 h at 37°C. On the next day, all blood agars were examined and all bacterial colonies were counted and recorded.
Ethical approval
The study was conducted in accordance with the principles of the Declaration of Helsinki. All participants provided written informed consent.

The antibacterial effect of antiseptics on nosocomial bacteria was presented in Table 1 which showed the inhibitory effects of different antiseptics on nosocomial bacteria using different concentrations of antiseptics. Specific antibiotic discs were used as a positive control accordingly. H2O2 showed excellent inhibitory effects on all nosocomial bacteria even with lower concentrations (10%). However, ethanol did not show any inhibitory effects as shown in Figure 1a to c.
The MIC of chlorhexidine against MRSA and P. aeruginosa was 10%, while for A. baumannii was 20% (Table 2). The results showed that Klebsiella spp. was sensitive to H2O2 only with MIC of 10%, while A. baumannii was resistant to ethanol only. MRSA, A. baumannii and E. coli were sensitive to Iodine at various concentrations. E. coli was sensitive to H2O2 with MIC of 50%. Vancomycin disc was used as a positive control and showed inhibition in the growth of MRSA while polymyxin B disc was effective against A. baumannii and P. aeruginosa. Also, Imipenem showed inhibition of E. coli and Klebsiella spp.
Thus, H2O2 clearly shows effectiveness against all nosocomial bacteria since it has the largest zone of inhibition among all the antiseptics (Table 1).
Table 3 shows the inhibitory effects of the highest concentration of different antiseptics used on nosocomial bacteria after 10 min incubation. The results showed that H2O2 had excellent effect and all bacteria showed no growth on blood agar, while chlorhexidine and iodine had excellent effects on E. coli and Klebsiella. The next antiseptic in descending order of their effectiveness was Dettol since both E. coli and Klebsiella were able to survive. However, all studied bacteria showed full growth and not affected by ethanol. 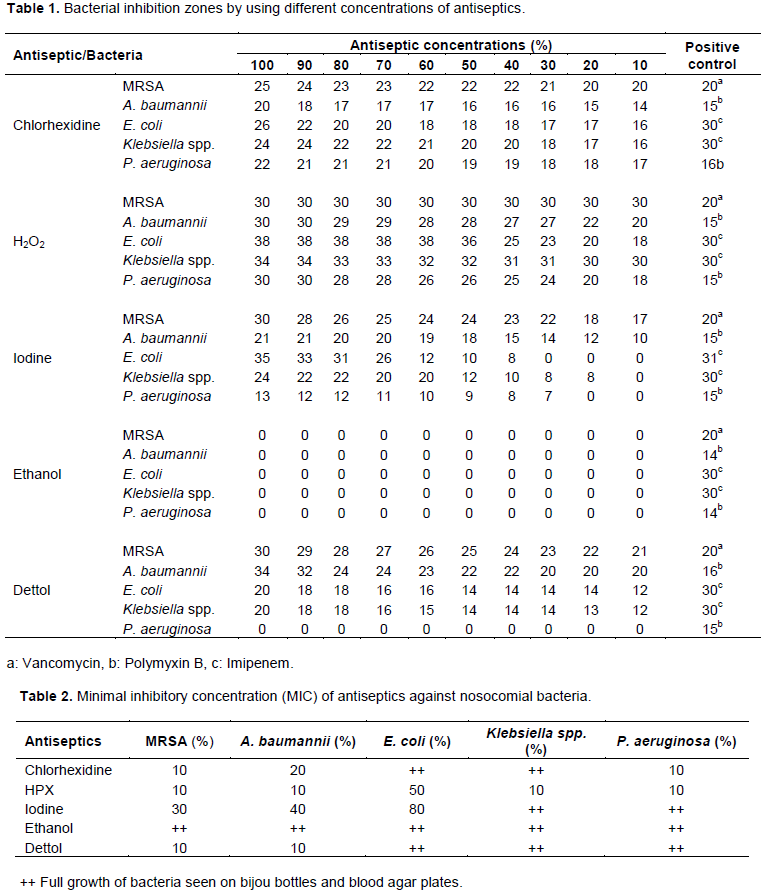 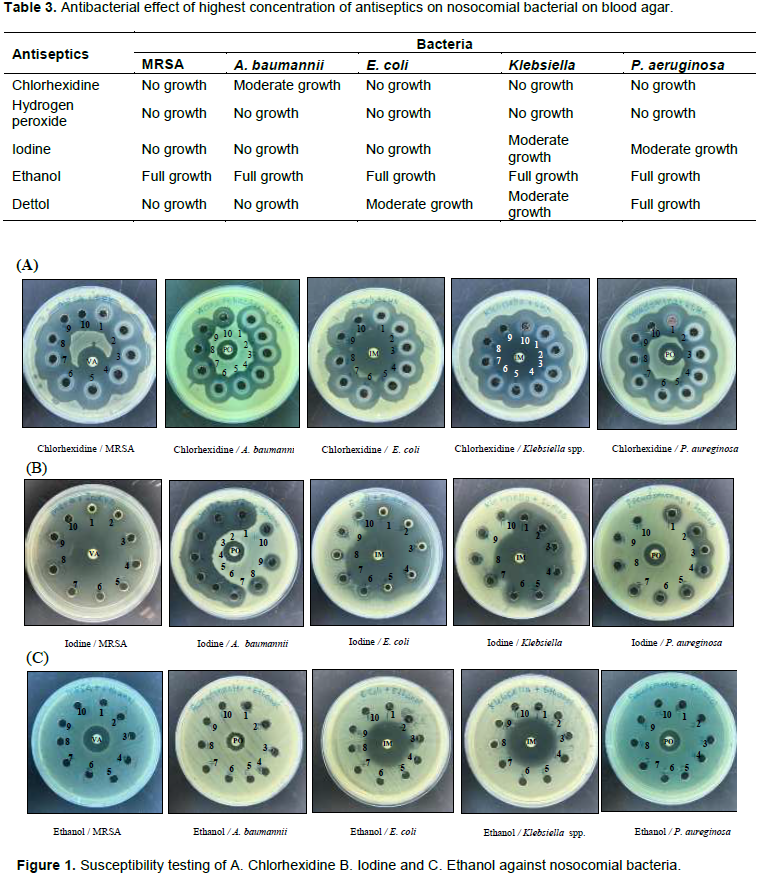 This study has confirmed that H2O2 was the strongest antiseptic against nosocomial bacteria followed by chlorhexidine, whereas ethanol was the weakest one. Determination of antimicrobial efficiency of antiseptics regularly is crucial to reduce NI which also could be reduced by using a proper antiseptic with adequate dilutions.

This work was supported by Faculty of Medicine, Universiti Teknologi MARA (UiTM) under the program, Research Entity Initiative (REI) Grant [600-IRMI/DANA 5/3/REI (0008/2016)]. The authors would like to thank UiTM Private Specialist Centre for their support, and also all technicians in multi-disciplinary laboratory for their help and support.