Antimicrobial resistance by bacteria isolates continues to receive attention globally. This investigation looks into the antibiotic susceptibility pattern of Gram negative bacteria isolated from intensive care unit patients in Al-Ahsa, KSA. Bacteria samples were classified based on the CDC criteria for the definition of ICU infections. Gram negative bacteria had been isolated on MacConkey agar using basic bacteriological technique. Identification and antimicrobial susceptibility was carried out using the GN cards of the Vitek 2 compact system. The results showed non-ESBL producing Klebsiella pneumoniae to be the most frequently encountered, isolated from 21% (n=23) of the patients. Other isolates were ESBL producing Escherichia coli (9.47%) and K. pneumoniae (3.77%), E. coli (15.09%), Pseudomonas aeruginosa (10.38%), Proteus mirabilis (9.43%), Acinetobacter baumannii (8.5%), and Carbapenem resistant K. pneumoniae amongst others. Resistance to five antibiotic groups was seen in A. baumannii, Enterobacter, E. coli, K. pneumoniae ESBL K. pneumoniae, non ESBL K. pneumoniae and P. aeruginosa. The association between bacteria resistance to antibiotic groups was statistically significant with a p-value of 0.00001. The encountered isolates showed both multi-drug resistance as well as extensive drug resistance against the tested drug. This information is being provided for Al-Ahsa and would be important for regional surveillance.

Hospital intensive care units are said to account for less than 10% of total hospital beds in most hospitals. However more than 20% of nosocomial infections are said to be gotten from ICUs (Dror and Keith, 2016). World Health Organisation (Ducel et al., 2013) report defines nosocomial infections as “those infections occurring in hospitalised patients or those in healthcare settings in whom the infection was neither present nor incubating at the time of admission”. With the rise in morbidity and mortality resulting from ICU infections all over the world, attention is being drawn by researchers (Iwuafor et al., 2016;  Sugata  et  al.,  2015;  Molay  et  al.,  2014)  to  the
reporting of pathogens associated with these infections. Also, besides the effect of ICU infections on morbidity and mortality, there is the effect on the cost of treatment to be considered (Blot, 2008). A wide range of organisms inclusive of Gram negative and Gram positive bacterial isolates have been associated with these infections (Maazuddin et al., 2014). Encountered pathogens have included both coagulase positive and negative Staphylococci, Proteus mirabilis and Klebsiella pneumoniae (Iwuafor et al., 2016). Other reports listed ICU infectious agents to include Acinetobacter baumannii, Pseudomonas aeruginosa, species of candida amongst other organisms (Kayaaslan et al., 2016; Zaman et al., 2015).
The antimicrobial susceptibility patterns of encountered ICU isolates have also been receiving much attention, particularly in this era of multidrug resistant bacterial superbugs (Theuretzbacher, 2013). According to Maazuddin et al. (2014), nosocomial infections are frequently caused by multidrug resistant (MDR) strains of bacteria such as methicillin resistant Staphylococcus aureus (MRSA), vancomycin resistant S. aureus (VRSA) and vancomycin resistant enterococci (VRE). This view was also supported by Zaman et al. (2015) who reported an increase in resistance by Gram negative bacteria (GNB) to antimicrobials used for their treatment. Also, it is stipulated (Brusselaers et al., 2011) that pathogens associated with ICU infections exhibited higher resistant rates to commonly used antimicrobials when compared to those in community or hospital wards. Antibiotics are generally used in the treatment of bacterial infections. However, the advantages of such usage is being hindered by an increase in the emergence of MDR bacteria strains worldwide (Yezli et al., 2014). In Saudi Arabia, there is a recorded increase in the prevalence of bacteria pathogen that are highly resistant to antimicrobial of choice (Yezli et al., 2014; Memish et al., 2012; Alsultan et al., 2014). High levels of antibiotic resistance by GNB such as A. baumannii and P. aeruginosa isolated from intensive care units have been known to lead to a significant morbidity and mortality (Al-Ahmadey et al., 2013).
There is an urgent need to reduce both morbidity and mortality rates caused by ICU infections. Iwuafor et al. (2016) however postulated that such a reduction would be dependent on the availability of adequate and accurate data for individual local regions. They were of the view that there was an over dependence on available data from different regions which they say is not a reflection of the realities at various local regions. They argued that aetiological resistance pattern differ even in units of the same hospital. Earlier reports (Barai et al., 2010) indicated that the organisms causing infections, along with their susceptibility to antibiotics not only varied from country to country but varied also from one hospital to another and even among ICUs within a hospital. As the world  is   gripped   with   thoughts   of   the  possibility  of returning to pre-antibiotic era, there is the need for regular surveillance of clinical isolates and their susceptibility to available antibiotics. Regional difference must also be taken into consideration. The present investigation looks into the GNB isolates associated with ICU infections in Al-Ahsa, south-eastern region of Saudi Arabia with a view to providing information of such in this region.

Description of the study setting
The isolates were collected from the laboratories of five hospitals for a period of six months, from January 2016 to June 2016. Four of the hospitals were in Al-Ahsa and one in Al-Khobar. All of the hospitals are located in the South eastern region of Saudi Arabia.
Ethics approval and consent to participate
Ethical approval was not required as the samples were part of the routine in standard care of patients.
Sample collection and criterial for collection
Selection of ICU samples was based on the criteria by Centre for Disease Control and Prevention (CDC) definition for ICU infections. This stipulates that ICU associated infections are those that occur after 48 h of ICU admission or within 48 h after transfer from an ICU (Deep et al., 2004). For exclusion criteria, samples from patients who had stayed in ICU for less than 48 h were not included in the study.
Laboratory samples included endo tracheal aspirates, surgical abdominal site swabs, catheter tips, sputum, diabetic wounds, urine, type 1 necrotising fasciitis, ear swabs and vagina swabs. A total of 93 samples were collected and used for the investigation.
Processing of samples and antimicrobial susceptibility test
Only Gram negative isolates were used for the investigation. They had been isolated and identified in the respective hospital laboratories using basic microbiological and biochemical identification test. Samples were transported to the College of Medicine, Microbiology Laboratory on ice bed and stored at -80°C until required. At the College of Medicine Laboratory, they were cultured using MacConkey agar following basic microbiological techniques for the preliminary identification of isolate. Confirmation of the isolates was by the Vitek 2 compact system (bioMe´rieux) according to the manufacturer’s guidelines using the GN ID and AST Cards.
The antimicrobial susceptibility profile of the isolates was tested against the following antibiotics: Augmentin (AUG), ceftriaxone (CRO), cefotaxime (CTX), ceftazidime (CAZ), Cefepime (FEP), gentamicin (GM), amikacin (AK), Imipenem (IMP), Meropenem (MEM), Ciprofloxacin (CIP), Levofloxacin (LEVO), piperacillin-Tazobactam (TZP), Colistin (CS), Tigecycline (TG), and Sulphamethoxazole/trimethoprim (SXT) using the GN cards of the Vitek 2 compact system.
ESBL producing isolates were detected using the Vitek 2 compact automated system based on the antimicrobial susceptibility pattern. ESBL production confirmation was carried out using the cefepime/cefepime  plus  clavulanic  acid  Etest strips (AB Biodisk. Solna, Sweden),following manufacturer’s guidelines.
Multi-drug resistance (MDR) was assessed based on the method of Zhanel et al. (2008) as resistance to 3 or more of the following antibiotic groups; Aminoglycosides, Cepharlosporins, Carbapenems, Fluoroquinolones and Penicillin. While extreme drug resistance (XDR) was classified as defined by Magiorahos et al. (2012), it was not only being resistant to multi antimicrobials but also exhibiting the likelihood of being resistant to all.
Statistical analysis
Data was analysed with excel Microsoft software and GraphPad Prism. One-way ANOVA test was used to compare treatment of ICU isolates to the different antibiotic groups. Statistical significance was taken at p<0.05. 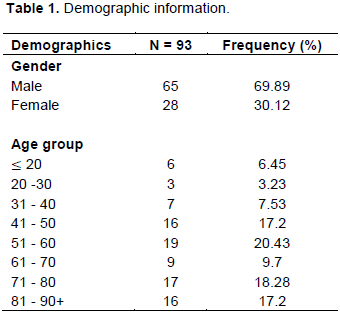 The encountered bacterial isolates and their characteristics
K. pneumoniae were the most frequently ICU bacteria isolates with 23(21%) being  non  ESBL  producing.  The  ESBL producing K. pnemoniae constituted 3.77% of all the ICU isolates while an equal percentage (3.77%) were carbapenem resistant (CRE). ESBL - producing Escherichia coli made up 9.43% of the total ICU isolates while non ESBL E. coli producers made up 15.09% of the total isolates and the results are presented in Figure 1. Also, encountered ICU bacteria isolates were P. aeruginosa (10.38%), P. mirabilis (9.43%), A. baumannii (8.5%), and Proteus vulgaris (6.6%). Enterobacter constituted 5.66% of the total isolate, while Serratia marcescens and Stenotrophomonas maltophilia made up 2.83 and 0.94% of the total isolates respectively (Figure 1).
Characteristics of patient specimens
Of the confirmed infections, 15.5% of the patient isolates were from the sputum. Infections associated with urinary tract were 10.7% of the total ICU samples while bloodstream infections were from 11.9% of the patients. The most common infections were from wound swabs constituting 32.1% of patients with diabetic wounds, bed sores as well as post-surgical abdominal swabs. Tissue specimens were from 7.1% of patients with necrotising fasciitis while endotracheal aspirates made up 4.8% of the total ICU samples. Catheter related infection were 2.4% of total isolates, with infections from ear and throat making up 2.4 and 1.2% respectively of the total isolates. The infection sites were not given for 11.5% of the total patient samples, and the results are presented in Figure 2.
Antimicrobial susceptibility of the isolates
The results on the antimicrobial susceptibility of the Gram negative ICU isolates are presented in Table 2. For A. baumannii, resistance was highest with ceftazidime (77.8%), followed by Cefepime and ciprofloxacin with a 66.7% resistance each. Imipenem, meropenem and piperacillin-tazobactam recorded 55.56% each. One (11%) isolate was resistant to Colistin, Augmentin and Cefuroxime. There was a 33.33% resistance against gentamycin and levofloxacin. While being sensitive to tigecycline, intermediates were seen in all the antibiotics with the exception of the following: Cefuroxime, Cefotaxime, Cefepime, Meropenem and Ciprofloxacin. A high antimicrobial resistance was seen among the Enterobacter. All (100%) were resistant to Cefuroxime and 80% resistant to the following; Ceftriaxone, Cefotaxime, Gentamicin and Ciprofloxacin. There was no resistance to Colistin and Tigecycline, while for other antimicrobials, resistance was as follows: 60% for Ceftazidime, Meropenem and Levofloxacin. Also, there were intermediates to all the tested drugs with the exception of cefuroxime. 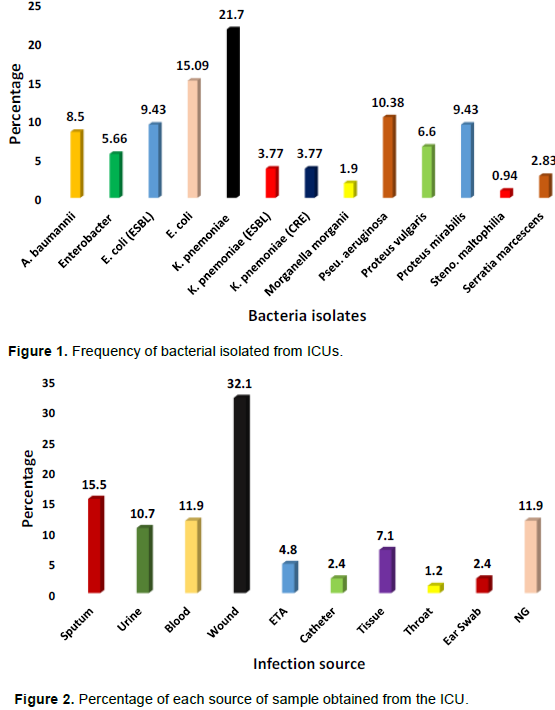 Table 3 also shows that carbapenem resistant K. pneumoniae exhibited 100% resistance against all the tested antibiotics with the exception of Colistin and Tigecycline. A similar resistant pattern is seen with ESBL producing K. pneumoniae. For this isolate, there was 100% resistance against the tested antibiotics with the exception of piperacillin-tazobactam (75%) and sensitive to the carbapenems. For E. coli, there was no resistance against Colistin and Tigecycline while ESBL E. coli showed resistance against the Carbapenems and Tigecycline.
Fifty percent (50%) of the isolated P. mirabilis were resistant to Colistin, with a further 25% being intermediate to this drug. Resistance rates for P. aeruginosa were as follows: Augmentin (47.4%), Cefuroxime (52.6%), Ceftriaxone (100%). This isolate was sensitive to Ceftazidime, Cefepime, and Gentamicin amongst others as shown in Table 2. The only Stenotrophomonas maltophilia isolate was resistant to all the antimicrobials with the exception of Levofloxacin. The Enterobacter were sensitive to Colistin and Tigecycline with  a  resistance   pattern   for   other  antimicrobials  as follows: AUG (60%), CXM (100%), CRO (80%), CTX (80%), GM (80%), CIP (80%) and the results are shown in Table 2. 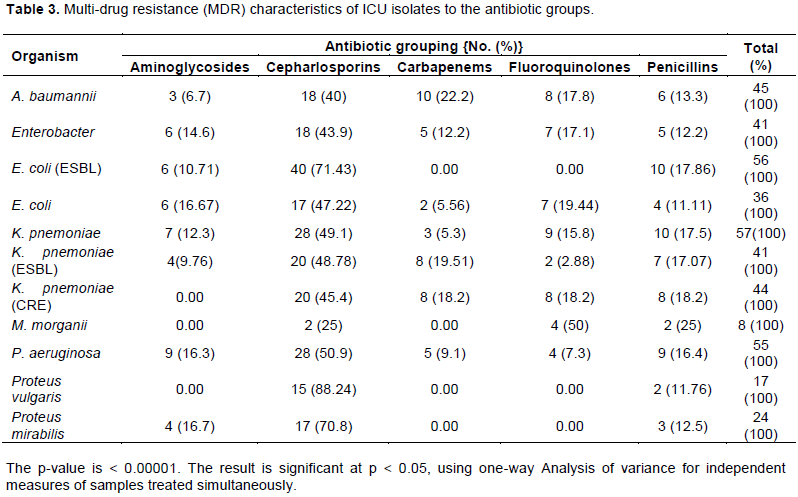 The present investigation shows that bacterial isolates from ICU continue to show high antimicrobial resistance patterns. This calls for concerted effort at stemming the tide of regional surveillance for MDR bacteria in the Kingdom of Saudi Arabia”.