Plants have always been part of human cultures due to their usefulness in prevention and treatment of human and animal diseases (Anselem,  2004;  Rios  and  Recio, 2005). According to experts, World Health Organization (WHO) estimated that 80% of the population of some Asian and African countries makes use of herbal medicine
especially in some aspect of primary health care (Augustine et al., 2017). The emergence and widespread of antibacterial resistant strain of bacteria has further compounded the global threat of infectious    diseases. Medicinal plants have been reported as alternative treatment of disease in order to overcome the problem of antibacterial resistance by pathogenic micro-organisms (Emad, 2011; Ibrahim, 2014). The emergence and widespread of antibacterial resistant strain of bacteria has further compounded the global threat of infectious diseases. Alternative antimicrobial strategies are needed thus, this lead to re-evaluation of the therapeutic use of ancient remedies, such as plants (Mandal et al., 2010). The use of medicinal plants for medical treatment has become popular when people realized that the effective lifespan of antibiotics is limited and over prescription and misuse of traditional antibiotic are causing microbial resistance (Alam et al., 2009).
Solanum incanum L. (Solanceae) is a perenial wild shrub-like herb commonly called Sodom/bitter apple or bitter garden egg usually found in the middle East, East Asia and many regions in Africa (Nigeria inclusive). It is used traditionally in the treatment of sore throat, angina, stomach-ache, colic and headache (Kokwaro, 1993). The fruits of S. incanum has been reported to have marked antibacterial effect against several Gram positive and Gram negative bacteria such as Streptococcus pyogenes, Staphylococcus aureus, Clostridium perfringens, Bacillus anthracis, Brucella arbutus and Salmonella species (Alamri and Moustafa, 2012; Mwonjoria et al., 2014). Similarly, the leaf extracts showed antibacterial activity against Escherichia coli (Britto and Senthinkumar, 2001), S. pyogenes, S. aureus and P. aeuruginosa (Taye et al., 2011). The antifungal activities have also been demonstrated (Mwonjoria et al., 2014; Mbaya and Muhammed, 1976). However, the activities of this plant against multi drug resistance have not been adequately investigated; hence, the present study investigated the phytochemical constituents and antibacterial activities of leaf extracts of S. incanum L. against MDR bacterial isolates. 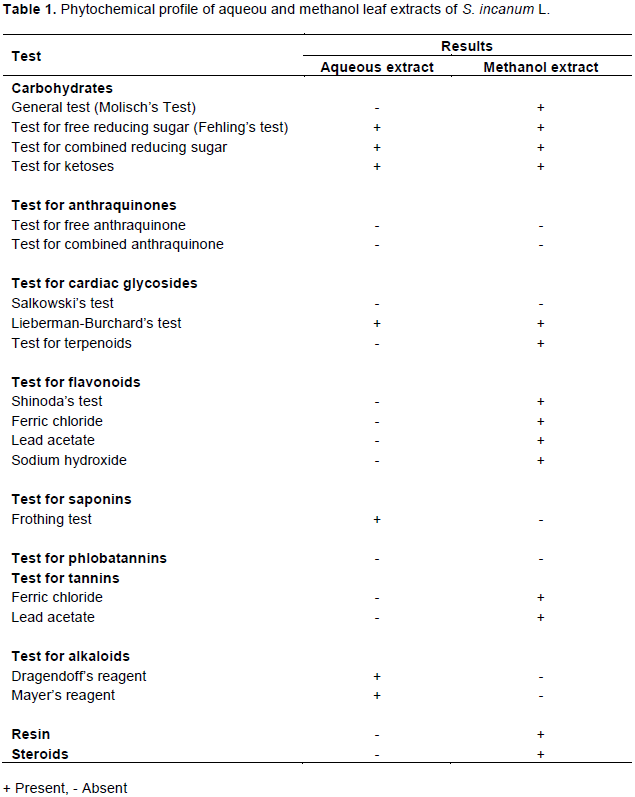 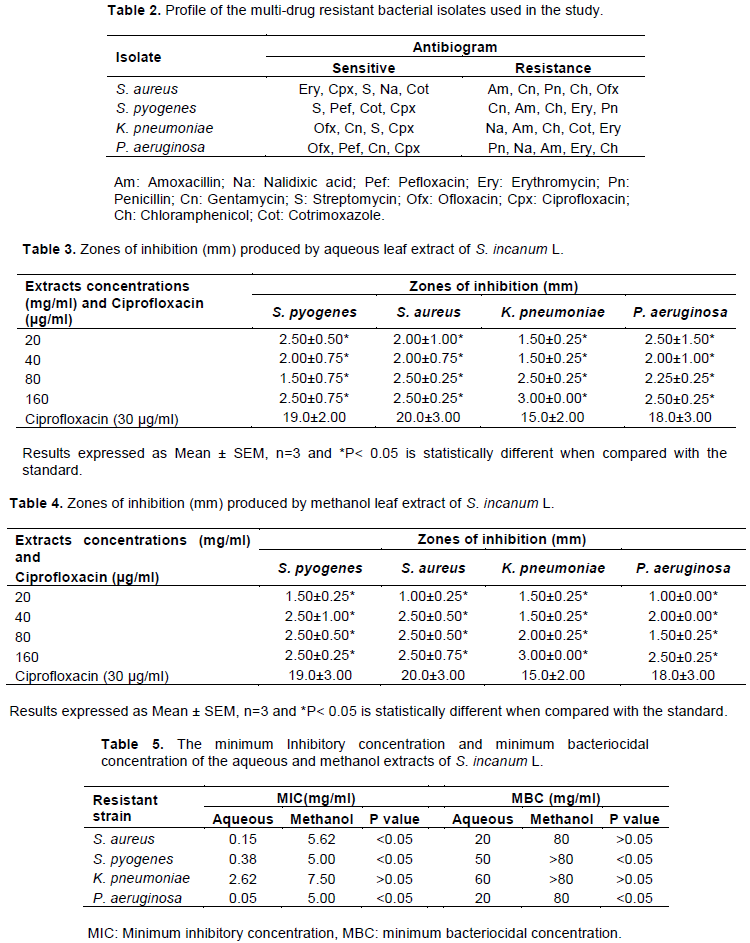 Morbidity and mortality of bacterial infections are on the increase partly due to inadequacy and high cost of new generation   antibacterials     as     well    as   widespread  resistance to old generation antibacterials (Williams, 2000; Fair and Tor, 2014; Li and Webster, 2018). Therefore, there is need to look for new substances from other sources with proven antimicrobial activity.
Consequently, this has led to the search for effective antimicrobial agents of plant origin. The present study evaluated the antibacterial activities of aqueous and methanol leaf extracts of S. incanum L against MDR.
In this study, the antibiogram reflected all isolates sensitive to Ciprofloxacin but resistant to amoxacillin and chloramphenicol. Each of the isolate was resistant to at least five (5) drugs; therefore, the antibiogram of the bacterial isolates used in this study indicated that the isolates are multi-drug resistant. The resistance of strains of these bacterial (S. aureus, S. pyogenes, K. pneumoniae, P. aeruginosa) to numerous antibacterial drugs observed in this study is in accordance with previous studies that reported MDR among bacteria (Khan and Musharraf, 2004). Several factors may lead to increase in antimicrobial resistance which include; previous antibiotic used, inappropriate use of antimicrobial agents and inadequate adherence to infection control practice (Shu-Hui et al., 2011). Resistance of S. aureus, S. pyogenes and K. pneumoniae isolates to penicillins (amoxycillin) and chloramphenicol could be an indication of wide use of the  drugs. Poor  sensitivity  to  amoxycillin may be due to production of alpha-lactamase by resistant strains of isolates (Jhambh et al., 2012).
Secondary metabolites of plants have large economical value because of their involvement in production of colour or fragrance of flowers, taste and colour of food and resistance against diseases. The judicious use of different plant parts by folkloric medicine has played a key role in reducing human diseases (Mazid et al., 2012; Doss and Anand, 2012).
Flavonoids, resin, alkaloids, terpenoid, steroids and tannin have been reported to possess antimicrobial activities (Usman and Osuji, 2007; Doss and Anand, 2012; Sheel et al., 2014; Ghalem and Ali, 2017).
The results of this study suggested that the presence of potential pharmacologically active substances such as resin, flavonoids, alkaloids, steroids and saponins are responsible for antibacterial activities. The antibacterial activities of S. incanum L.  showed that the aqueous and methanol leaves extract have activities against the bacterial tested (S. pyogenes, S. aureus, K. pneumoniae and P. aeruginosa) and this was in conformity with previous work done by Alamri and Moustafa (2012) in Saudi Arabia. Also, Owino et al. (2015) reported that the extract of S. incanum L. was found to be bacteriostatic and bacteriocidal against S. pyogenes, S. aureus, K. pneumoniae and P. aeruginosa.