Distribution patterns of Vibrionaceae abundance on the landing stages in coastal area: Understanding the influence of physicochemical variables by using multiple linear regression models and corrgram for matrix correlation

The present work used multiple linear regression (MLR) models and corrgram to assess the importance of environmental parameters on diversity and abundance dynamics of Vibrio sp. in waters of few landing stages in the city of Douala (Cameroon). It was recorded in all the five selected stations, the presence of four species of Vibrio namely, Vibrio parahaemolyticus, Vibrio cholerae, Vibrio fluvialis and Vibrio alginolyticus whose highest abundance reached 5.65, 6.26, 4.9 and 4.83 log CFU/100 ml respectively. Vibrio cholerae was the most isolated during the study with a frequency of 65%. The abundance dynamics of these germs is strongly influenced by nitrates, salinity, dissolved carbon dioxyde (CO2) and ammonium ions (NH4+). The visualization of corrgram shows high degree of association between studied parameters. We note a coefficient of determination r2 = 0.50 for the multiple linear regression model for Heterotrophic Aerobic Bacteria (HAB) and a coefficient of determination r2 = 0.58 for the MLR model for V. cholerae. The physicochemical parameters explain at 43% (r2 = 0.43) the distribution of the abundances of V. parahaemolyticus, at 45% (r2 = 0.45) the distribution of abundances of V. alginolyticus and at 26% (r2 = 0.26) for V. fluvialis.

Coastal areas are among  the most  important  regions considering food supply and natural resources (Alizadeh et al., 2018). They are vulnerable to the extremely variable conditions of coastal environments such as tides, storms and low flows (Conley, 2000; Gonzáles et al., 2004). This is the case of the urbanized hydrographic network of the Wouri, which is subjected to anthropogenic pressures due to the anarchic proliferation of industrial and urban activities and tidal phenomena (Tchakonté, 2016). The high activity in the coastal and marine waters can make an impact on the pollution and the quality of coastal and marine waters (Tanjung et al., 2019). Monitoring of the coastal water quality is vital from the perspectives of coastal resource usage and management (Pravakar et al., 2015). Estuaries and coastal areas are high strategic areas for economies and environment. They perform many biological and ecological functions such as fish nursery grounds. The ecological functioning of these nurseries is vital to allow the normal life cycle of many marine species of major economic interests.
Coasts are transitional surfaces between continents and the sea (Beatley et al., 1994). These are areas where the predominantly continental and oceanic mechanisms ignite and interact intensely. From an economic point of view, the coastal zone is essentially made up of consumers of fishery products and infrastructure that depend on river or sea ports (Niang et al., 2012). This structuring therefore brings out a submerged zone, made up of aquatic ecosystems (rivers, estuaries and seas) and another emerged (terrestrial) where intense economic activities take place within the limits of the coastal region which is located on either side of the coastline. Faced with multiple environmental stresses, bacteria in general and those of the genus Vibrio in particular have remarkable survival strategies and adaptations capacities of their physiological functions (Zhong et al., 2009).
Several studies have revealed that the dynamics of bacterioplankton abundance is generally controlled by various environmental parameters of the medium (Nola et al., 2002; Castaneda et al., 2005; Ben et al., 2014; Tamsa Arfao et al., 2021). The water quality depends of the physicochemical parameters of the waters (Ha­muna et al., 2018). Vibrio species are known autochthonous populations found in freshwaters and marine sediments worldwide (Osunla and Okoh, 2017). However, few data are available on the distribution of vibrioplankton in Cameroonian coastal waters in general and at landing stages in particular. Little is known about the influence of physicochemical parameters on the diversity and abundance of bacteria of the vibrio genus in coastal areas. But, the influence of physicochemical parameters on this abundance dynamic has not been addressed very much.
Multiple linear regressions and correlation matrices are used by researchers to assess the quality of water environments. Multiple linear regression (MLR) is used to determine mathematical relationship among a number of random variables. In other terms, MLR examines how multiple independent variables are related to one dependent variable. Once each of the independent factors has been determined to predict the dependent variable, the information on the multiple variables can be used to create an accurate prediction on the level of effect they have on the outcome variable. These analysis method has been used for River water modelling prediction (Abba et al., 2017). The present work aims, through multiple linear regressions and correlation matrices, to determine the parameters which influence on the diversity and abundance of bacteria of the Vibrio genus at the landing stages in coastal areas.

Study area and sampling stations
The study took place from February to July 2019 in the city of Douala, economic capital city of Cameroon and capital city of the Littoral Region. It is geographically located in the Golf of Guinea at the intersection of the parallel 04°03 North latitude and the 09°04 meridian East longitude. The climate is equatorial, Cameroonian type, coastal sub-type, with monomodal rainfall characterized by heavy rainfall (3414 mm on average in 2011) and an average ambient temperature of 26.3°C. There are two unevenly distributed seasons, a long rainy season which lasts nine months (March - November) and a short dry season which lasts three months (December - February) (Suchel, 1972).
Concerning the metrological data of the city of Douala during the study period, the air temperature varied from 26.1 to 27.6°C, the relative humidity as for it varies between 74 and 78%. The values ??of insolation and rainfall reach 190 KWh / m2 / d and 592.2 mm respectively.
The vegetation, initially of the humid dense forest type, is completely degraded nowadays. The very dense hydrographic network is made up of the Wouri and Dibamba rivers and their tributaries which irrigate almost the entire city. At the petrographic level, the soils consist mainly of sandy and clayey-sandy formations (Giresse et al., 1996). In order to have a clear idea of ??the location of the different study sites, the geographical coordinates of all the sampling stations were determined using a Garmin Etrex 30 brand GPS. Those coordinates are given in Table 1. Figure 1 shows the geographical location of the study area and the sampling stations.
The choice of sampling stations was made on the basis of their accessibility, their economic importance and their proximity to marketplaces. These different stations serve as clearinghouse for the landing of sea products of various species (shrimp, fish, skate), and the risks of contamination of the landing stages are higher. A total of five stations were chosen including two stations at the Youpwe landing stage (Youpwe 1 and 2), one station at the Essengue and Akwa North landing stages and a last station at the Sandaga port. At each site, water sample was collected in a 500 ml sterile glass bottle labeled A, and in a 1000 ml clean polyethylene bottle labeled B. Both samples were transported to the laboratory in a cooler with icepacks (7±2°C) for further analyses. The sample in bottle A and that in the polyethylene bottle B were for the assessment of the bacterioplankton cells and for some physico-chemical analysis respectively. 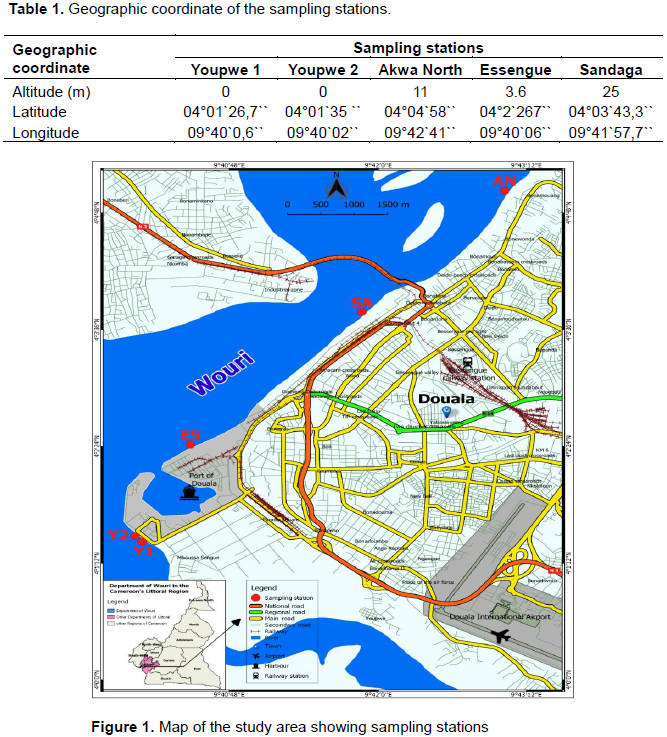 Measurement of environmental variables
At the level of each sampling station, the physicochemical analysis focused on 12 variables. Physicochemical parameters (Water Temperature (°C), pH (CU), dissolved oxygen (% of saturation), electrical conductivity of water (µS / cm), salinity (psu), dissolved CO2 (mg/L), suspended Solids (mg/L), water color (Pt.Co),  turbidity (FTU), nitrates (mg/L), orthophosphates (mg/L of PO43-) and ammonium ions (mg/L of NH4+)) were measured according to the techniques described by APHA (2009) and Rodier (2009).
Bacterial isolation and identification
The quantitative analysis of bacteria aimed at isolating and counting of heterotrophic aerobe bacteria (HAB) and bacteria of the genera Vibrio sp. The analysis technique used was that of surface spreading on Agar culture media poured into Petri dishes. HABs were isolated on ordinary agar medium, incubated at 22°C for 5 days (Tamsa Arfao., 2021). Thiosulfate Citrate Bile Salts (TCBS ; BioMerieux) was used for the isolation Vibrio sp, incubated at the temperature  of  37°C for 24 h. The Identification of Vibrio species began with the research for mobility type and Gram staining. Gram stain provides information on the morphology and structure of the bacteria wall. The parameters considered were the colour, size and shape of the colonies on the TCBS agar. Classical biochemical identification has made it possible to search for enzymes such as oxidase, lysine decarboxylase, ornithine decarboxylase, urease, tryptophanase and βgalactosidase (Holt et al., 2000). From a pure culture colony on alkaline nutrient agar, a suspension in sterile distilled water was prepared. The bacterial suspension were distributed in the capsules of the API 20E system (BioMérieux, France). The metabolites produced were made evident by color reactions or by addition of reagents, after 24 h of incubation at 37°C. Corresponding bacterial species were determined numerically with the help of APIDENT 2.0 software. The identification rate was maintained at least at 98%. The count of isolated germs was carried out using an OSI brand colony counter. Bacterial abundances are expressed in decimal logarithmic units Colonial Forming Units (CFU) per 100 ml of water sample.
Data and statistical analysis
Data was typed using Microsoft Excel and imported into the programme SPSS version 25.0 for analysis. The Kolmogorov-Smirnov test was first applied to check the normality of the distribution before comparing environmental parameters and abundances of bacteria isolated. The Kruskal – Wallis test and Mann – Whitney test were then performed with SPSS 25.0 to verify significant differences between stations considering each environmental parameter. The corrplot function of R Software version 3.5.0 allowed us to obtain corrgram. A corrgram represents the graph of a correlation matrix. The corrgram is very important to highlight the most correlated variables. In this type of graph, the correlation coefficients are colored according to their value. The correlation matrix can also be reordered according to the degree of correlation between the variables. This corrgram was used to measure the degree of association between abiotic variables on one hand, and between abiotic and biological variables on the other hand. Multiple linear regression models were done to establish relationships between the physicochemical variables and abundance bacteria of Vibrionacaea. This statistacal method predicts the level of variation between the variables and defined by the following equation:
Where, for i = n observations, yi is dependent variable, xi is explanatory variables, b0 is y-intercept (constant term) and bi the slope coefficients for each explanatory variable (Parmar and Bhardwaj, 2015; Chen and Liu, 2015).

At the end of this study, it emerges that the waters of the wharves are home to a large community of heterotrophic aerobic mesophilic bacteria including 4 species of the Vibrio genera, namely V. cholerae, V. parahaemolyticus, V. alginolyticus, and V. fluvialis. V. cholerae was the most frequently isolated and also the most abundant. The isolation of these bacteria in the water points studied can be source of real public health problems for the using populations, and are incriminated in many diarrheal diseases, food poisoning and gastroenteritis would justify the outbreaks of vibriosis recorded in Douala for several years. The Multiple linear regression models and the visualization of corrgram revealed that the diversity and abundance dynamics of these germs is strongly influenced by nitrates, salinity, dissolved carborn dioxyde and ammonium ions