Tolerance and observance of methotrexate in the treatment of rheumatoid arthritis at the university Hospital Bogodogo, Burkina Faso

This study is aimed at assessing tolerance and observance of the patients with RA (rheumatoid arthritis) treated by methotrexate at University Hospital Bogodogo, in Burkina Faso. A cross-sectional study was conducted from July to September 2015 in outpatients with rheumatoid arthritis monitored in rheumatology service. Data were obtained from interview, by reviewing medical cards of the patients and consultation report forms. In total, 205 patients with RA were included. Among them, 135 were treated with methotrexate (65.9%). All patients treated with methotrexate took folic acid tablet weekly. The duration of RA evolution varied from 1 to 360 months with a mean of 48 month. The mean duration of treatment with methotrexate was 30.2 months. Among the patients treated with methotrexate, 28.8% observed adverse reactions, 53.3% declare taking their medication without break during the last month. Discomfort (8.9%) and nausea (5.9%) were the most frequent adverse effects. Stock out of methotrexate in community pharmacy (10.4%) and adverse effect (5.9%) were the main reasons of patient’s inobservance. Methotrexate is always the cornerstone of RA treatment. This study confirms the good tolerance of methotrexate and difficulty of observance with this treatment.

Rheumatoid arthritis (RA) is an inflammatory, chronic and autoimmune pathology. Its prevalence in the world varies from 0.4 to 1% according to the gender, race or  ethnicity, period and regions (Gabriel, 2001; Igor et al., 2015). However, data about prevalence of RA are limited for the Sub-Saharan   African   region   (Igor   et  al.,   2015).   Its hospital prevalence was estimated in African countries such as Togo (0.45%) (Houzou et al., 2013) and Burkina Faso (2.18%) (Ouedraogo et al., 2014). Because of the high cost of medical and pharmaceutical care with the use of most recent medicines, RA is a health public issue. Moreover, patients with RA cannot be very active in economic system. Immunosuppressive drugs are the base of the RA treatment and aims to improve symptoms prevent complications and improve quality of life. Considering the literature, methotrexate is the immunosuppressive drug most frequently prescribed (Sany et al., 2004; Weinblatt et al., 2013; Shinde et al., 2014). Patients using methotrexate are highly exposed to its adverse effects of two main factors: cytotoxic effect and prolonged duration of treatment. Inobservance to treatment is associated with relapse or persistence of RA. The previous studies about observance with methotrexate showed that the majority of patients have not a good adherence (Contreras Yanez et al., 2010; Bluett et al., 2015). About 40% patients are non-adherent to methotrexate (Bluett et al., 2019).  Several studies were performed about RA in Burkina Faso (Ouedraogo et al., 2017; 2016; Yameogo, 2016). However, up until now, there was no research concerning adverse effects and observance with methotrexate in Burkina Faso. This work aimed to assess tolerance and observance of the patients with RA treated by methotrexate at university hospital Bogodogo.

A cross-sectional study was performed in patients that visited rheumatology service of the hospital Bogodogo from February to May 2017. The patients were included according to the following criteria: having RA agreeing with the American College of Rheumatology (ACR) and European League against Rheumatism Collaborative initiative (EULAR) classification for rheumatoid arthritis, diagnosis carried on by a physician, patient treated with methotrexate. Patient not having medical report form was not selected.

Data were collected from June to July 2017. A resident pharmacy student has reviewed the medical dossiers of the patients and interviewed the patients to complete information during their medical visits.

To assess adverse reaction of methotrexate, French method of causality assessment applied to individual cases of pharmacovigilance was used (Arimone et al., 2011). The score of intrinsic imputation ranged from I0 (the lowest score) to I6 (the highest score) according to the causality level.

Data were registered with Epi-Info 7. Patient was considered “observant” when he responded “No” at the question to assess observance. Statistical analyses were performed by calculated prevalence of patient’s characteristics, methotrexate adverse effects and observance.

The head of the rheumatology service and the director of Hospital Bogodogo agreed the protocol before the starting data collection. Patients gave their consent for the interview.

Characteristics of the patients

The Table 2 shows the distribution of patients according to the socio-demographic, clinical and therapeutic characteristics. The duration of RA evolution varied from 1 to 360 months with a mean of 48 month. The mean duration of treatment with methotrexate was 30.2 months. 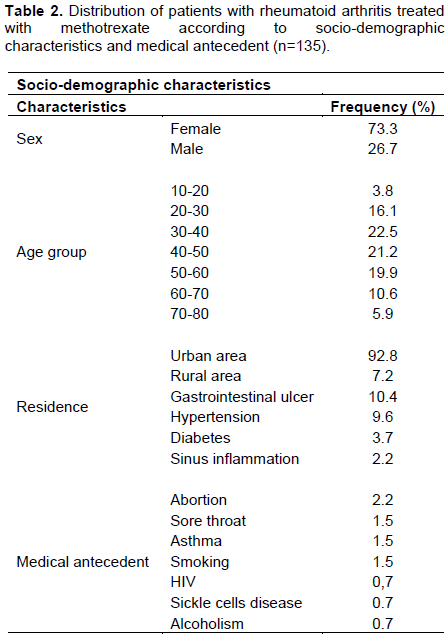 Tolerance of the methotrexate 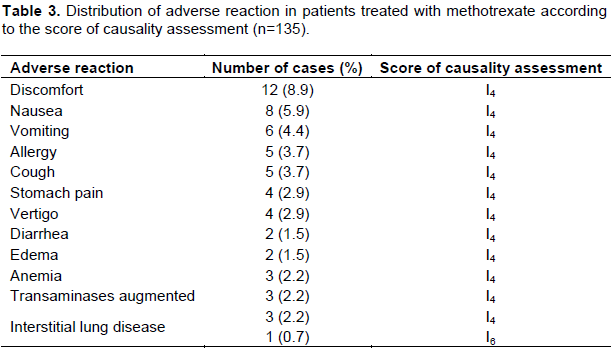 Adherence to treatment with methotrexate

Among the 135 patients treated with methotrexate, 53.3% declare taking their medication without break during the last month, 24.4% did temporary one or several breaks of their treatment during the last month. The reasons of inobservance that patients declared are listed in the Table 4. However, some patients missed their medical visit (22.2%). Their observance could not be measured.

This study has some limits. Firstly, it has been conducted in patients visiting hospital and results cannot be applied to the global population of  Burkina  Faso.  Secondly,  the observance of patients that didn’t come at medical visits is not measured. In last, as any cross-sectional study using previous reported data, data about patients are missing in some medical reports.

Methotrexate was used in the majority of patients of our study (65.9%). Andia et al. (2016), found 60% in a study at Niamey National Hospital. In despite  of  the  marketing of biotherapies, methotrexate is again the main and first intention drug for RA treatment. Its good tolerance, efficacy and affordable cost make it a gold standard for RA medication.

The majority of patients lived in urban area (92.8%). Lekpa et al. (2018) found 79.4% living in Dakar. RA was more frequent in urban population than rural individuals. Many environmental factors such as lifestyle would be associated (Hayem, 2002).

The score of imputation is higher than 4 for all adverse reactions.  However,  adverse  effects  were  observed  in one-third of the patient (28.8%). Serious adverse effects were uncommon. These results confirm the good tolerance of methotrexate described in literature. The low frequency of anemia could be related to folic acid used concomitantly with methotrexate.

Finally, the results show that more of the half of patients was inobservant. Patients more frequently cited stock out in community pharmacy and adverse effects of methotrexate to justify their inobservance. There are also uncommon reasons in patients treated with methotrexate: desire of pregnancy and travelling. According to the literature, the main reason of treatment break was adverse effects (WHO, 2003).

The authors are thankful to the Director of the University Hospital Bogodogo to allow the data collection of this study in her institution.