Phyllanthus odontadenius Müll. Arg is one of the most important medicinal plants in the genus Phyllanthus (Phyllanthaceae). It is used in different regions in the world for the treatment of various diseases for example malaria caused by Plasmodium falciparum causing millions deaths in tropical and subtropical regions. In this work, we experimented P. odontadenius seeds germination and seedlings infected by Agrobacterium rhizogenes A4RS/pHKN9. We obtained 36% of seeds that germinated for 84.6% of seedlings transformed which showed positive gfp activities. The number of hairy roots formed in infectious sites for seedlings infected with A. rhizogenes A4RS/pHKN29 is valued at 6.3±2.71 against 0 for control seedlings. Diagrams showed that mean length for the new-formed roots were 1.92±0.55 cm and 1.59±0.49 cm for hairy root.

In many tropical and subtropical regions, malaria remains one of the main global health problems of our time, causing more than 1 million deaths per year, with about 90% of deaths and 60% cases occurring in South Africa in the Sahara. It is caused by the protozoan parasite Plasmodium falciparum and transmitted by female Anopheles mosquitoes, which bite mainly between sunset and sunrise (WHO, 2007; Orhan et al., 2006; Mitaine-Offer et al., 2002).

The widespread resistance of P. falciparum against classical antimalarial drugs through the tropics (Olliaro and Yuthavong, 1999) has led to a research of new drugs with new modes of action (Tona et al., 2004). It is well known that plant species used in traditional or folk medicine synthesize and accumulate various secondary metabolites (Cimanga et al., 2004). P. odontadenius is one of most important medicinal plants in the genus Phyllanthus (Phyllanthaceae) used in different regions in the world for the treatment of various diseases (Unander et al., 1991; Bajaj, 1999; Luyindula et al., 2004).

In recent years, rapid procedures for obtaining trans-genic roots have been developed using Agrobacterium rhizogenes, a soil pathogen which elicits adventitious, genetically (Ri-T-DNA) transformed roots (Chabaud et al., 2006). A. rhizogenes mediated transformation has also been used to produce transgenic hairy root culture and plantlets have been regenerated (Anand, 2010). Several studies on A. rhizogenes (Tepfer, 1983, 1984, 1990; Chabaud et al., 2006) have shown that although many dicotyledonous plants are susceptible to infection by these bacteria and can be transformed and produce hairy roots, some of these species have no ability to regenerate plantlets through their hairy roots.

Although Phyllanthus niruri hairy roots have been previously reported (Ishimaru et al., 1992; Bajaj, 1999) and showed the main constituents contained in these hairy roots. The objective of this work was to compare firstly the standard methods and modifications to those methods for P. odontadenius seeds germination from Kinshasa in DRC (Democratic Republic of the Congo) and secondarily to investigate P. odontadenius hairy roots production using A. rhizogenes A4RS/pHKN29 for later identification or isolation of secondary metabolites against P. falciparum causing malaria disease.

Seeds of P. odontadenius from CGEA/ CREN-K in Kinshasa (DRC) were subjected to six essays of germination (A, B, C, D, E and F). Firstly, seeds were surface scarified with sulfuric acid 96% and disinfected firstly with 70% (v/v) ethanol for 1 min, and then in 0.1% (p/v) aqueous mercuric chloride (HgCl2) for 3 min (Zhao et al., 2006). Secondarily, seeds were dipped in 20% Domestos for 10 min followed by four rinses with sterile water. Then seeds were dipped in 200 ppm gibberellic acid (GA3) solution during 4 h (Jimenez et al., 2007). Thirdly, H medium (Hoagland and Arnon, 1938) was prepared then adjusted to pH 5.6 and solidified with 8 g/l agar before autoclaving at 121°C for 15 min. Seeds were placed aseptically on hormone-free H medium and incubated at 27°C for 16 h photoperiod with 50 µmol/m2/s. Leaved seedlings were used for inducing hairy roots.

A. rhizogenes, strain A4RS harboring pHKN29 plasmid, containing GFP only, was used as a binary vector for the generation of control hairy roots (Kumagai and Kouchi, 2003; Nakatsukasa-Akume et al., 2005), activated by culturing on Luria and Bertani (LB) medium (LB medium: 1 L containing 10 g Bacto-tryptone, 5 g of yeast extract, 10 g of  sodium chloride salt  and 15 g of  agar with pH  adjusted to 7.2 before autoclaving). 200 mg/l of kanamycin and 300 mg/l of streptomycin were prepared for incorporation. Previously, bacteria suspensions were prepared using single colonies of bacteria in LB medium supplemented with related antibiotics and cultured overnight at 28°C shaken at 120 rpm (Zhao et al., 2006) .The cultured A4RS/ pHKN29 was transferred on LB agar for 1 or 2 days infection later on hypocotyl Phyllanthus seedlings.

Axenic P. odontadenius seedlings were infected directly with A. rhizogenes strain A4RS/ pHKN29 using a needle G26. Each of the infected seedlings was cultured on solid MS/2 medium (Murashige and Skoog, 1962; Saitou et al., 1999; Bhattacharyya and Bhattacharya, 2004) and incubated in darkness. After the first appearance of hairy roots, seedlings were transferred to hormone-free solid MS/2 medium gelled with 0.8% agar containing 3% sucrose and 500mg/l cefotaxime. About three weeks after infection, several hairy roots appeared at the wounded sites. These were cut off and cultured in hormone-free MS/2 semi-solid medium containing 500 mg/l cefotaxime for one week. This process was repeated three times to eliminate completely bacteria from the transformed roots (Ridgway et al., 2004). For investigation, number of hairy roots was counted seedling by seedling. They were cut and transferred on M/2 medium in square plate for growth.

Table 1 shows 36 ± 16.59% as total number of P. odontadenius seeds that germinated and seeds not dipped in GA3 that did not germinate. 36±16.59% divided as well as 76.4% for Jimenez et al., 2007 protocol (F) and 23.6% for Casuarina Protocols (E). 41.87% of seedlings from Jimenez et al. (2007) protocols were infected with A. rhizogenes A4RSpHKN29 with 5.4% only for seedlings from Casuarina protocols. On the other hand, 4.13% of seedlings obtained were immature for their infection with A. rhizogenes A4RSpHKN29. Others protocols used have not produce germination or seedlings because sulphuric acid showed a fatal effect on P. odontadenius seeds germination and on the other hand, gibberellic acid (GA3) has positive or stimulate effect in raising of dormancy seeds (Tourte, 2002).

Observations made under LEICA microscopic in order to certify gene reporter expression of gfp are illustrated in Table 2 and Figure 1.

Hairy roots number by seedlings in the infected sites and their length are presented in Figures 2 and 3.  Figure 2a shows that the infected plantlets produced most new-formed roots with 6.17±3.37 in the wounded sites of P. odontadenius seedlings against 4.83±1.83. These two values did not present difference at P=5% (F-cal. = 0.73 ? F-Tab. = 5.05). Hairy roots obtained with infected plantlets by A. rhizogenes A4RSpHKN29 were 6.3±2.71 against zero for control seedlings. 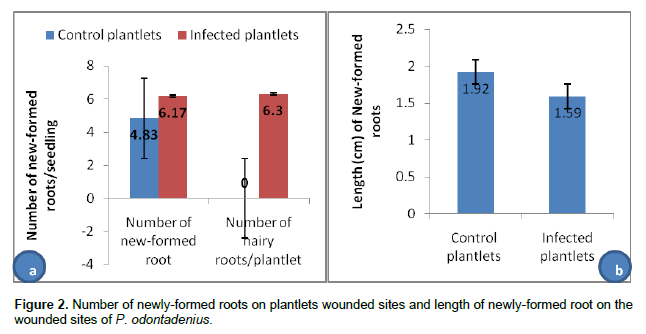 Hairy roots obtained by infection of P. odontadenius seedlings were cut and transferred into the square disk for their autonomous growth in on MS medium with cefotaxime 300 mg/ml. The growth of hairy roots is illustrated in the Figure 3. 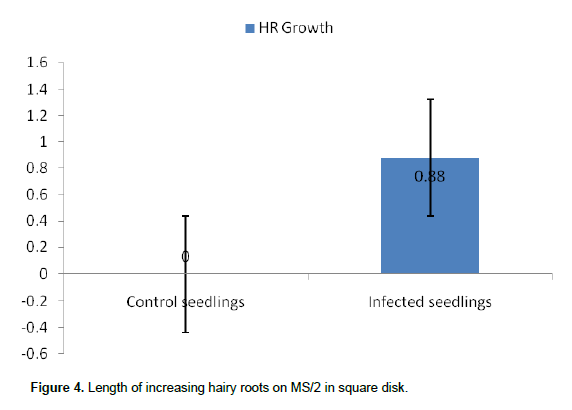 The main objective of this investigation was to establish protocol of germination and hairy roots production for P. odontadenius, an important herbal medicinal plant. In this work, we have been showed on one hand, the role of gibberellic acid in seeds germination or seeds lifting dormancy and embryo lifting dormancy (Tourte, 2002). On the other hand, the sulphuric acid toxicity when it is used in P. odontadenius seeds scarification which did not germinate after their dipping in gibberellic acid solution 200 ppm. Contrary to the results obtained by Jimenez et al. (2007) with the higher percentage (60%) of P. niruri seeds germination in vitro, we obtained 36% of germinated seeds. These results are better than the various results (3.8 - 30.20%) obtained by Unander et al. (1995) after the experiments on factors affecting germination. Authors reported that the hours after harvest, the temperature, hours of exposure to light and the environment of seeds derived are the important factors in P. amarus seeds germination.

The variation in our results shows the explanation in Unander et al. (1995) and by the Kinshasa environment issue (DRC) and the cultured media (MS and H). Another fact, we have obtained new-formed roots with all seedlings, wounded with needle and infected or uninfected with A. rhizogenes. It can be caused by the stress due to wounds by needle and by gibberellic acid used in seeds germination. These factors will be active on auxin hormone tenor which is increasing frequently whether by synthesis stimulations or by auxin - oxydase inhibitions for the uninfected seedlings (Augé et al., 1984). Then basic peroxydases have been particularly involved in the metabolism of auxinique catabolism, the application of gibberelic acid has been known in the increase of endogenous auxins (Zrÿd, 1988).

A. rhizogenes A4 strain, resistant to rifampicine and spectinomycine, have been shown their efficiency in the hairy roots production in Coffee (Coffea arabica) (Alpizar et al., 2008). Pirian et al. (2012) reported that the A4 strain was less efficient than AR15834, 9534 and C318 in the hairy root induction of Portulaca oleracea for adrenalin production. All strains used by these authors were rifampicin resistant.

Further, the infected or uninfected seedlings have been distinguished by the presence of callus, principle characteristic of A. rhizogenes strain A4RS/ pHKN29 and the green fluorescent protein (gfp) activities produced by the reporter gene coding gfp (Kumagai and Kouchi, 2003; Nakatsukasa-Akume et al., 2005) in the seedlings infected by A4RS/pHKN29. Another characteristic was the growth of hairy roots on MS/2 in the square plate than the new-formed root of control seedlings.

However, this experiment did not show difference between number and length of hairy roots (Figure 2) obtained and new-formed roots from seedlings of P. odontadenius uninfected with A4RS/pHKN29. This experiment has also noticed the difference in the length of the roots produced by seedlings of P. odontadenius and the non-multiplication of roots from the non-tainted seedlings when they were put in cultures on MS/2 without phyto-hormones whereas this growth is manifested for the roots from tainted seedlings with A4RS/pHKN29.

This survey revealed that A. rhizogenes A4RSpHKN29 encouraged the transgenic root production when the seedlings of P. odontadenius from germination of seeds (36%) were soaked beforehand in the gibberellic acid (200 ppm) for four hours. The proof of effectiveness of transformation has first been shown by the presence of the calluses instead of infection and then by the positive gfp activity when those roots are observed under the luminescent microscope. The growth of hairy roots on MS/2 in square disk was also the characteristic which confirm transgenic root production in P. odontadenius.

IAEA is acknowledged for the fellowship awarded under Technical Cooperation Project ZAI/5/016 between the DRC and International Atomic Anergy Agency (IAEA) through the CGEA/CREN-K which gave permission to leave the country (DRC) to do some months internship in France; the authors are grateful to Research Institute for Development (RID)/Montpellier through M. Didier BOGUSZ (supervisor) for providing a framework for the successful completion of a course on Modern Techniques of Molecular Biology.