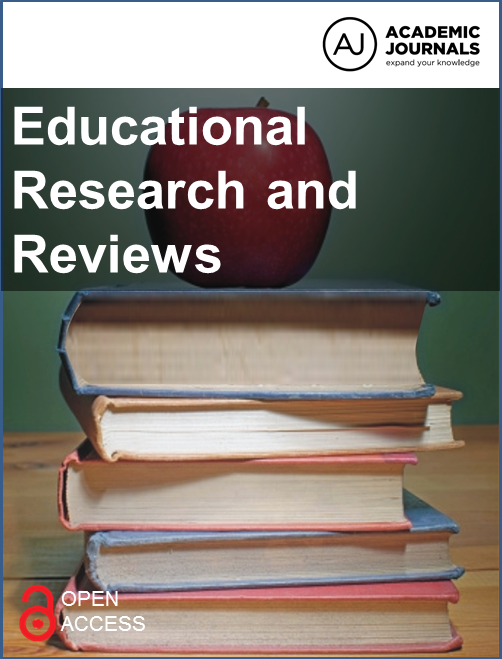 Research design
The study adopted a correlational research design. The design allows one to know if there exists any relationship between the study’s two variables. The design used the survey method of data collection which provided the respondents' tools to gauge their opinions they had experienced on variables (Mathematics anxiety and mathematics attitude) after which the relationships were established.
Participants
A total of 367 students from 55 public secondary schools were selected to take part in the study. The sample consisted of 170 (46.3%) male and 197 (53.7%) female students. The participants were  13-20 years old.
Research instruments
Mathematics Anxiety Scale (MAS)
Math anxiety was measured using an adapted 14 item Mathematics Anxiety Scale (Mahmood and Khatoon, 2011). There are 7 negatively worded items and 7 items positively worded used to measure students’ Mathematics anxiety. The Mathematics Anxiety Scale (MAS) is 5- point Likert scale that were scored as 1- never, 2- rarely, 3- sometimes, 4-often and 5- always for the negative items and the scoring was reversed for the positive items in MAS. The scores ranged from 14-70 with high score indicating higher levels of math anxiety.  The respondents who scored 14-32 were classified as low level of anxiety, 33-51 were classified as moderate in anxiety, while those who scored between 52-70 were high in anxiety. The MAS showed an acceptable consistency with a Cronbach’s alpha of 0.719 which is within Cronbach alpha of 0.87 reported by Mahmood and Khatoon (2011).
Attitude towards Mathematics Inventory (ATMI)
Mathematics attitude was measured using an adapted 40 item Attitude towards Mathematics Inventory (Tapia and Marsh, 2004). The ATMI is a 4- point Likert scale that was scored as 1,2,3 and 4 to represent strongly agree, agree, disagree and strongly disagree respectively. The scores ranged from 40-160 with high score indicating negative attitude. The students’ attitude was either positive or negative whereby the scores 40-86 had positive attitude and 87-160 had negative attitude towards Mathematics. The ATMI showed a good reliability with a Cronbach’s alpha of 0.744 which is within Cronbach alpha of 0.93 reported by Tapia and Marsh (2004).
Students’ performance
The opener mathematics scores were obtained from the respective teachers. The opener exam is an exam that is done at the beginning of a new term once students resume from holidays. The students’ score ranges from 0 to 100% with  their  respective  grade ranging from E to A. The higher score (41-100%) was regarded as high performance and the lower scores (0-40%) were regarded as low performance. The scores for the participants were obtained easily since the students were requested to write their admission numbers on the questionnaires for easy identification with what the teachers provided.  The grading system as per Kenya Certificate of Secondary Education (KCSE) year 2019 is shown in Table 1. 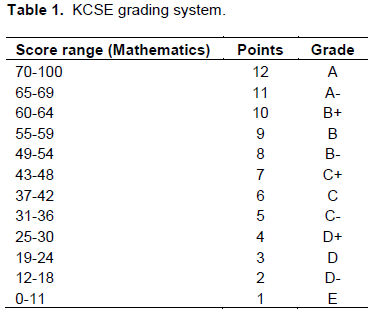 Data collection procedure
An introductory letter received from the university of Embu enabled the researcher to acquire a research permit from the National Commission for Science, Technology, and innovations (NACOSTI).  The researcher also obtained a consent letter from the County Director of Education, Meru County before seeking permission from the school principals in preparation for data collection. Thereafter, the researcher visited the schools in person and assured the study participants of total confidentiality with the information. Form three and form four students between 13 and 20 years old were randomly selected to participate in the study. The students from all the schools were presented with the scale during Mathematics class time in a regular school term. The participants were guided on how to fill the questionnaire by the researcher. The participants were asked to respond to questions independently. The questionnaire took 20 min to complete.
Data analysis
The edited data were coded and the analysis made by means of the statistics package for social sciences (SPSS).  The students’ demographic information was analyzed using descriptive statistics tables to get the percentages, means and standard deviations. The scatter plot diagram was used as it could give an outline about the relationship between mathematics anxiety, attitude and performance before the correlations were done. Spearman rho correlation coefficient was done so as to show whether there existed a relationship between mathematics anxiety, mathematics attitude and performance. The two tests were used to determine whether there was a significance relationship between mathematics anxiety, mathematics attitude and performance.

The authors wish to acknowledge the University of Embu, County Director of Education Meru County, school principal and all students who participated in the study to make it a success.