This study was carried out in view of the influences of Pidgin English amongst the students in Nigeria using Port Harcourt Local Government Area in Rivers State as a case study. It was conducted on two hundred students and eight teachers from four selected schools, four government workers and eight staff from the media. This research was executed because of the high rate of communication in Pidgin English amongst secondary school students, which has become a threat to their educational career. However, it was discovered in the course of the study, that there are factors that enhance this issue. The negative impact of the socio-linguistic status of Pidgin English in the Nigerian society has necessitated some recommendations which include: The creation of awareness among parents, the media and the government against the dangers of habitual use of Pidgin English, introduction and training of teachers on introduce effective methods during the English language lesson delivery. The government should invest more resources and manpower in education to enable the children from poor homes improve in the English Language, and Pidgin English should be introduced in the curriculum, so students could know the structures and lexical, to avoid code-switching it with that of the English Language.

Pidgin English is well recognized in Nigeria. It is spoken by seventy million people as a second language while over one million use it as a first language. Despite the need to gain mastery of the Standard English, Pidgin English is speedily emerging to the degree of being a national language. In fact, the Nigerian Pidgin started as a language of non-literates according to Bamgbose et al. (1995). This is because, acquiring English takes a longer period of time, needs people to go to school and not everyone has access to school and it seems tedious  than Pidgin English. In recent times, it is serving as a lingua franca in higher institutions and even to some extent, among graduates. This variety of English was established due to the trade situation that took place between the Portuguese and Nigerian trade partners especially the coastal people of the Niger Delta from 1469 to about 1529. Then the English people arrived at the beginning of the 17th century and replaced the vocabulary of the Portuguese-based English with words drawn from the English  language  without   changing   the   grammatical structure of the Portuguese-based English though only a few Portuguese words survived. For instance, pikin (child), palaver (problem) etc., can be quoted. From that time on Pidgin English has obtained a sociolinguistic status in Nigeria. The status of Pidgin English in Nigeria has enhanced the poor performance of students in English language and other subjects. There is always the tendency to pronounce English words wrongly: Father is pronounced as /fada/ instead of /'fÉ‘:ðÉ™(r)/
Also, students allow the entrenchment of Pidgin lexical items into the English sentences:
(a) Me I don’t know (Pidgin Influenced English) instead of:
(b) I do not know
Since a was lifted from the sentence “c” below, which is the Pidgin version of the sentence “a”
(c) Me a no know
Thus, due to this problem of expression, students rather conceal wonderful ideas in their minds because of limited English vocabulary to express their ideas. These effects of Pidgin English are being enhanced by three factors; the home background of students, peer group influence, the inefficiency of English teachers and students nonchalant attitude towards the subject, English language.
Students who come from homes where Pidgin English is their lingua franca struggle to cope with their English lessons and it takes a long time for them to internalize English lexical items and vocabulary. Furthermore, the teachers who should be agents of solution are sometimes inadequately qualified; either there are interferences from their mother tongue or Pidgin English, or they are just graduates of English language who have not undergone formal training on skills used in teaching the language. The inefficiency of teachers could affect the interest of students towards studying and improving in the English language. If these students who are likely to be emerged as Nigeria’s representatives in the global market do not learn to confidently express themselves in the English language which is speedily becoming a global language, it is likely this might impede our international transactions. 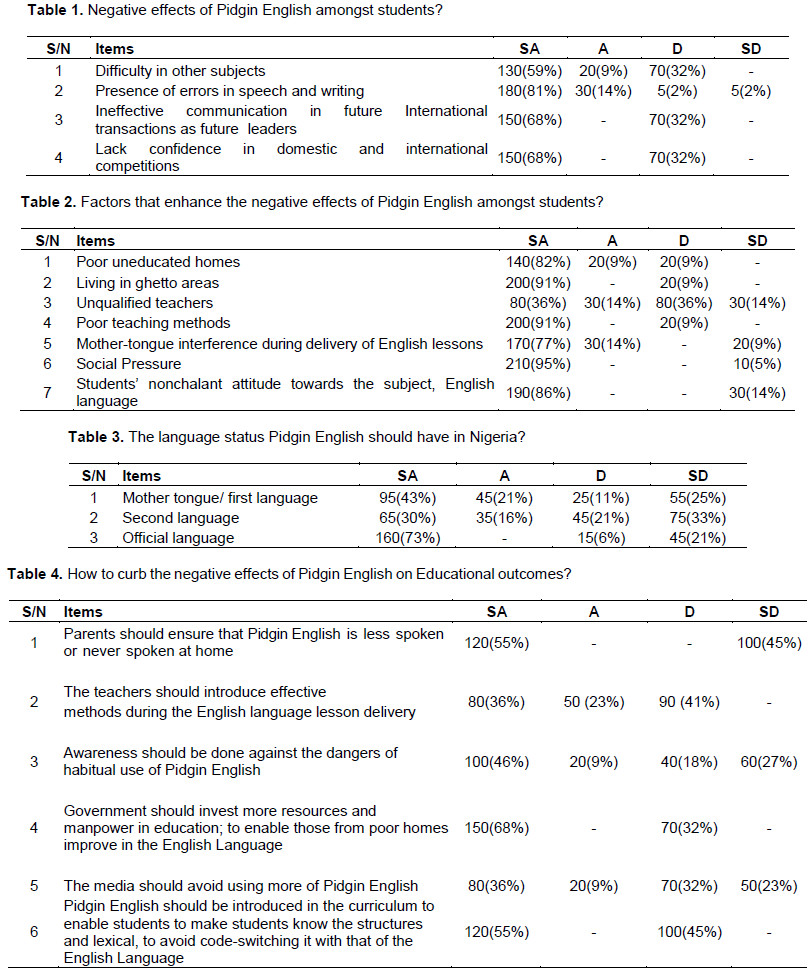 From the literature review and research results in Tables 1 to 3, it is very obvious that Pidgin English has got deep roots in Nigeria. This is because of its non-strict rules and it could be easily used in inter-ethnic conversations. Previously, it was assumed that only those who reside in the ghetto areas or are illiterates are conversant with Pidgin English. Recently even  the  elites  and  the  media prefer communicating in Pidgin English. Nevertheless, this status given to Pidgin English is becoming a threat to students’ proficiency in English language as well as impeding their successful performance in other subjects. Fapohunda (2016) and Adesulu (2015) reported the performance of students in the West African Senior School Certificate Examination, that is the percentage of candidates that obtained credits in five subjects and above, including English Language and Mathematics from 2013-2016 as follows: 2013 (38.68%), 2014 (31.28%), 2015 (38.68%) and 2016 (52.97%). This report is an evidence of the negative effects of Pidgin English. This is worsening due to peer pressure, the media programs in Pidgin English and the laxity of students towards English language and inefficiency of teachers as noted in the responses from Table 3, of which social pressure seems to be the factor that is more felt as it an issue very common with young people. They tend to imitate others and are likewise influenced when found among friends. This is followed by environment factor, which is life in the ghetto. Anyone born or finds himself or herself in such environment must be given to more communication in Pidgin English than English language as  most  of  the  occupants  of this environment are either uneducated or semi-educated.
This is an indicator that the L1 or the first language or the frequently used language will always interfere with acquisition of a second language. Therefore, students will constantly struggle with studying the English language because they will pick vocabularies in Pidgin English and use it in completing sentences in English language. Moreover the social distance students have with Pidgin English is closer than that of English language, as they are been surrounded with friends, classmates, the media or even relatives who enjoy communicating in Pidgin English. The closer the distance, the faster the acculturation with a particular language will occur. This indicates that the performance in English language as well as other language will keep falling as long as Pidgin English maintains its popularity. Although, the propositions to make Pidgin English an official language is to stop the marginalization of the language; if it is adhered to all the negative effects explained in this paper will keep occurring and Nigeria might not stand the chance of fitting effectively in the global market.

Pidgin English is indeed a language with unique characteristics; it can be used by everyone without educational disparity. However, with the fast rate of students’ acculturation and maintenance of a closer social distance with Pidgin English, the English language will gradually become unfamiliar to the Nigerian society. This situation as explained in the paper is of little or no benefit to Nigeria as regards the recent trend of globalization. Moreover, to calm these contentions, the English Language should still maintain its official status.
More resources should be invested by the government to conduct research on the structures and lexis of Pidgin English as well as the skills that could be employed in teaching Pidgin English as a second language in schools so that students would avoid code-switching Pidgin English with English language. In addition, teachers and other academicians in the tertiary level can be sponsored to undergo training to have knowledge of these lexis and structures of Pidgin English alongside with acquiring skills on effective teaching of Pidgin English and English language, respectively.
Awareness programs have to be carried out by the media and schools on the dangers of habitual usage of Pidgin English. This is because whatever choices a country makes, the international sector has to be put into consideration. Thus, if Pidgin English does not aid Nigeria in accruing benefits internationally, it should not be given an official status. If there are recent complaints about other countries that use interpreters during international transactions, then Nigeria should not decide to embark on this futile journey. Students in Nigeria are the prospective leaders of the nation; therefore their academic performance should be a priority that must not be overlooked. The factors posing as threats towards academic excellence should be worked on.