An estimated 70 to 85% of women sustain some degree of trauma to the perineum during childbirth (Rikard-Bell et al., 2014; Webb et al., 2014). Correct prevention, diagnosis and management are essential to reduce the risk of short-term complications like bleeding, infection and pain.

Perineal support is a technique developed to prevent perineal trauma at childbirth when the head is crowning. The thumb and index finger support the perineum, while the other hand slows the delivery of the head. Previous studies have demonstrated that this technique effectively reduce perineal trauma (Laine et al., 2012; Fretheim et al., 2013; Hals et al., 2010; Pirhonen et al., 1998; Aasheim et al., 2017).

Several options are available to investigate of the impact of introducing new treatments. One way is the use of criterion-based audit (CBA) (Figure 1). CBA is a process that seeks to improve quality of care through systematic review of care against agreed criteria followed by implementation of change. Self-reflection and feedback through CBA have proven effective in both high- and low-income countries (Pirkle et al., 2011; Wagaarachchi et al., 2001; Siddiqi et al., 2005; Kongnyuy and Uthman, 2009). 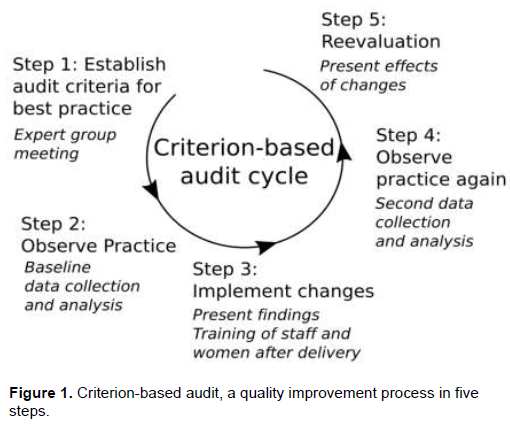 The study was conducted at Kilimanjaro Christian Medical Centre (KCMC), Tanzania. It is a referral hospital in the Kilimanjaro region.

In step two (Figure 1), baseline data were collected on a daily basis. The inclusion criteria were vaginally delivered women at KCMC  with  a  gestational  age  of  at  least  28  weeks  and a birth weight of ≥1000 g. Women were included over two periods of eight weeks from March to May (before intervention; baseline) and June to August 2016 (after intervention). All women were included after verbal and written informed consent after being assured strict confidentiality, and assurance that non-participation would not influence the care received.

Baseline data were analysed to assess the proportion of cases that met the audit criteria. Results were presented to staff, followed by a discussion to explore causes of substandard care and to suggest improvements.

Step 3 (Figure 1) included a 1 h hands-on training in perineal support for all residents, midwives and senior staff. Furthermore, the staff received training in the diagnosis of perineal trauma and treatment of AI by PFMT. Training of staff included theoretical lessons including themes emerging from the analysis of the baseline data collection. A Danish obstetrician and two Danish midwives carried out the training over a period of one week. The technique for perineal support was practiced on a pelvic delivery model. The Danish midwives supervised three deliveries at the delivery ward for further supervision.

All women were instructed in PFMT by a trained nurse before discharge and by a 4 min animated cartoon instruction video in Swahili.

After the intervention, another eight-week data collection period followed step 4 (Figure 1). A follow-up interview by telephone three months after delivery was conducted. A Swahili speaking research assistant performed the interviews. The interviewer was blinded with regard to all delivery details of the women. Symptoms of AI were assessed by the Jorge-Wexner score (Devesa et al., 2013; Jorge et al., 1993), translated into Swahili. The women were asked if they experienced perineal pain, if so to which extent; somewhat, moderately or very much. In addition, women were asked if they knew about PFMT, if they had performed it, and if so, how often.

Observations were compared to baseline data and presented to the staff (step 5, Figure 1).

The outcomes were compared before and after the intervention as categorical data by a two-tailed Chi-squared test (or Fisher’s exact test for numbers five), and described as numbers, frequencies, relative risks (RR) and 95% confidence intervals (CI). The statistical software package SPSS 24 (SPSS Inc., Chicago, IL, USA) was used for all data analysis.

Ethical approval was achieved from the research unit at KCMC, on 5 May 2016, No. 927 (Research No. 795) and from National Institute for Medical Research in Tanzania.

A total of 555 women delivered vaginally during both study periods, 552 met the inclusion criteria and agreed to participate (282 before the intervention and 270 after the intervention). The practice of perineal support was observed in a sample of 101 (35.8%) vaginal deliveries at baseline and 112 (41.5%) after the intervention. Clinical assessment of the women with perineal trauma was performed in 272 (96.5%) before and 261 women (96.7%) after the intervention, while 21 (3.8%) of the included women refused examination. In total, 440 women completed the follow-up phone interview three months after delivery (80%) (Figure 2). 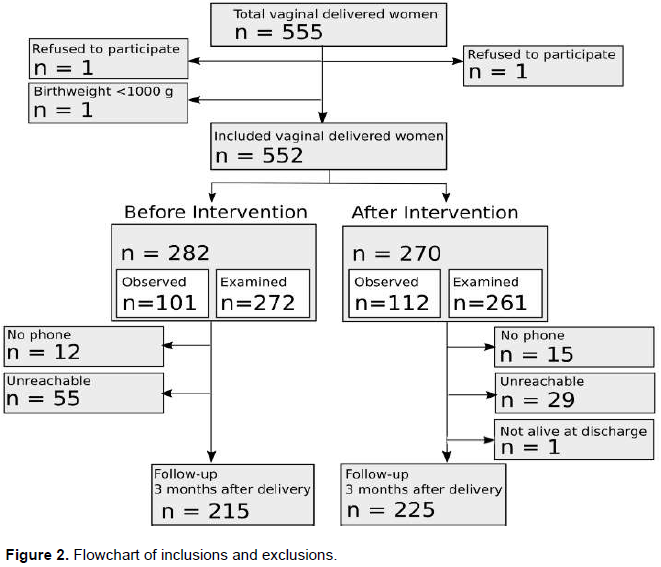 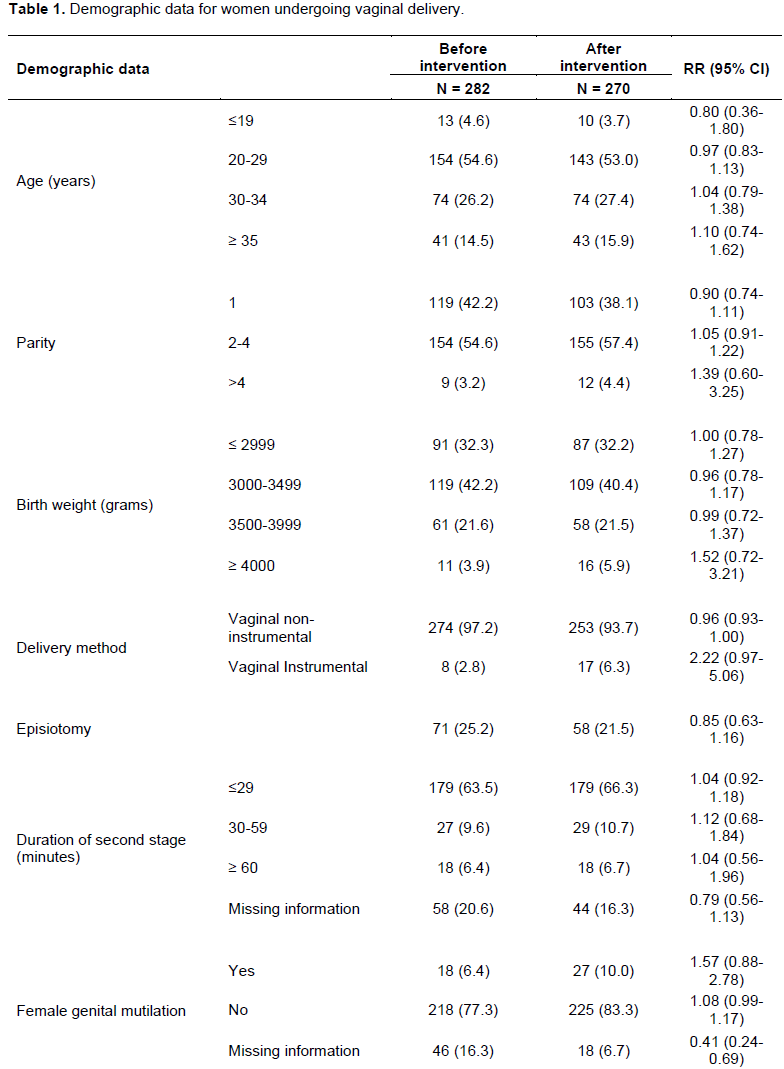 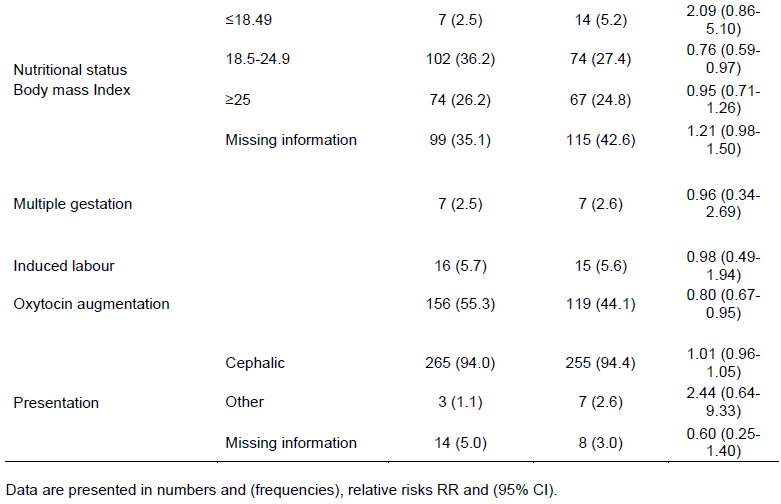 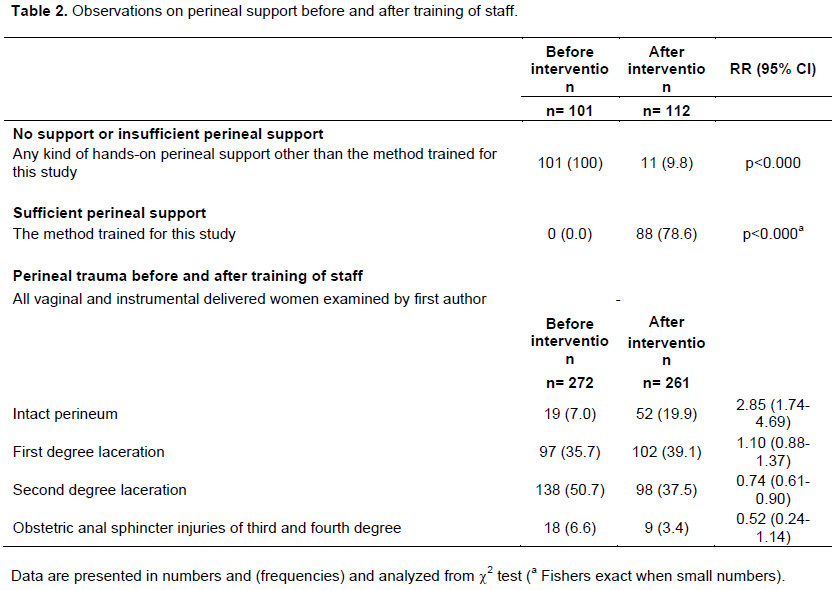 In total, 162 (30.5%) women were sutured immediately after delivery and before the assessment by JM was possible. 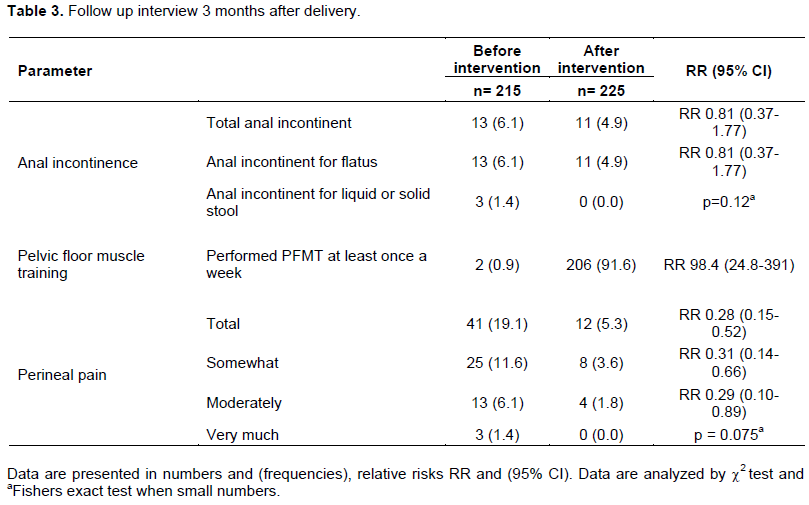 The  incidence  of  perineal  trauma  was  high  before the intervention, and prevention, diagnosis and management were insufficient. Our study demonstrates that the use of a CBA process increased the awareness of perineal support and may act to decrease the number of women with perineal trauma.

Furthermore, the intervention was followed by a better classification of the trauma, however without significantly decreasing the frequency of AI. The frequency of AI in our study prior to intervention was comparable with previous  studies  in  Africa  demonstrating a frequency of  7% or even higher (Okonkwo et al., 2002; Obioha et al., 2015; Aguiar et al., 2019; Walker and Gunasekera, 2011), but declined to a frequency comparable to that observed in the Nordic countries after the intervention, however not statistically significant (Laine et al., 2012; Fretheim et al., 2013; Hals et al., 2010; Pirhonen et al., 1998; Aasheim et al., 2017). Although decreasing AI is important, a more careful suturing and consequently lower pain perception as observed may follow a better definition of the degree of perineal trauma.

The CBA process is flexible and makes adaption possible to context and available resources. Relevant staff was involved throughout the process that resulted in a valuable mapping of suboptimal care, which provided a strong basis for tailoring an effective intervention. The selected audit criteria were simple and clear making the data collection feasible. The prospective study design allowed clarification of unclear documentation and thereby improved data quality. Together this made the intervention feasible for the low-income setting. This is in agreement with experiences with CBA in other conditions (Pirkle et al., 2011; Wagaarachchi et al., 2001; Siddiqi et al., 2005 and Kongnyuy and Uthman, 2009). For the improvements seen in this study to be sustainable, continued training and improvement of care and guidelines are important, which was out of the scope of this study.

This is, to our knowledge, the first intervention study to investigate the incidence and possibilities of prevention of birth-related trauma and subsequent complications in sub-Saharan Africa.

Telephone interviews were used as a feasible and inexpensive follow-up method as many women had access to telephones, and consequently a high follow-up rate on 80% was reached. This suggests that follow-up could be simplified in settings with limited  resources  and long distances between patients and hospitals.

A limitation is the study design not being a randomized controlled trial. However, such a trial is both ethically questionable and difficult to implement in a low income setting with valid data.

However, we cannot exclude that our results may be due to other circumstances than the intervention such as being present at the study site, improved registration, etc. However, other quality assurance interventions that could influence the results did not take place during the study period, neither were other major incidences like shortage of staff or supplies noticed. We are aware that sustainability is a problem, and that adherence to the instructions may decrease with time. This is a well-known problem, which has been described by others (Pirkle et al., 2011; Wagaarachchi et al., 2001; Siddiqi et al., 2005; Kongnyuy and Uthman, 2009).

The strong adherence among the women to the PFMT shows that the instruction video, when introduced by a trained nurse, was effective. Women were eager to receive advice from health professionals, which explains the high motivation to perform PFMT after delivery. However, the adherence is probably overestimated as a health-educated interviewer could be perceived as an authority figure, which could lead to exaggeration of how often PFMT was performed.

All clinical assessments and collection of data were performed by the same researcher, and all follow-up interviews were done by the same Tanzanian research assistant, making the before and after assessment comparable. However, the validity of the observations and categorization of trauma concerning the 30.5%, who were sutured before the assessment could be questioned. Another concern is the absence of blinding of JM who performed the clinical assessments. This could tend  to  underestimate  the  degree  of   perineal  trauma wishing to see positive effects of the intervention. This was kept in mind, and observations were found to be done as meticulous and as objective as possible.

In conclusion, we observed that the incidence of perineal trauma was high and prevention, diagnosis and management were poor at the study site. Through the CBA process, perineal support was more frequently used, and perineal trauma and perineal pain after three months were reduced but not AI. Based on these findings we think that CBA can be used to improve quality of care in low-income settings. Regarding the impact on sustainability, further long-term studies are needed.

The authors thank all staff members at KCMC and Miss Elly Kimaro for doing the follow-up interviews. The study was funded by The Augustinus Foundation (grant number: 16-0082).