The intention to seek professional mental health help and the stigma surrounding help seeking can vary across cultures depending on specific cultural norms (Mojaverian et al., 2013; Vogel et al., 2017). For instance, individuals in the Eastern world tend to be more interdependent and have encompassing social relationships with each other, with thoughts, feelings, and actions that are contingent on these relationships (Markus and Kitayama, 1991). As such, the act of seeking help outside of these encompassing social relationships may lead to the interruption of interpersonal  relationships  for  individuals within collectivistic societies (Mojaverian et al., 2013), such as Japan, and collectivism has been found to be negatively associated with having positive, help-seeking attitudes (Sun et al., 2016). Furthermore, people in collectivistic cultures prioritize emotional restraint over emotional expression e.g., discussing mental health issues (Chen et al., 2015).
In comparison, individuals in the western world, such as Americans, tend to be more independent and are encouraged to be autonomous and self-enhancing and place  importance  on  personal  identity  (Wang and Lau,
2015; YÄ±ldÄ±z and ÅžimÅŸek, 2016). Moreover, there is less emphasis on considering the ingroup and those close to individualists when making decisions, such as seeking help, and the decision to seek help from mental health professionals may not be influenced by individuals’ relationships with others. Indeed, previous researchers have found that Asians and Asian Americans tend to underutilize mental health services (Kikuzawa et al., 2019; Kim and Zane, 2016), while the prevalence of certain mental illnesses is relatively similar between America and Japan (Inaba et al., 2005). Researchers have also found that Asians tend to avoid seeking mental health services and frequently terminate therapy prematurely in comparison to Americans, and they may also delay seeking help in general (Atkinson and Gim, 1989; Han and Pong, 2015). Due to these findings, it is necessary to examine the differences between American and Japanese individuals’ intentions to seek professional mental health help.
The purpose of this exploratory study was to examine the cultural differences of public stigma, self-stigma, self-efficacy, and confidence in mental health professionals’ abilities between American and Japanese college students. We then considered how these differences influence students’ help-seeking intentions. Such investigation is vital since it helps identify effective ways to reach out to many Asian and Asian American individuals who are suffering through mental health struggles without sufficient treatment. 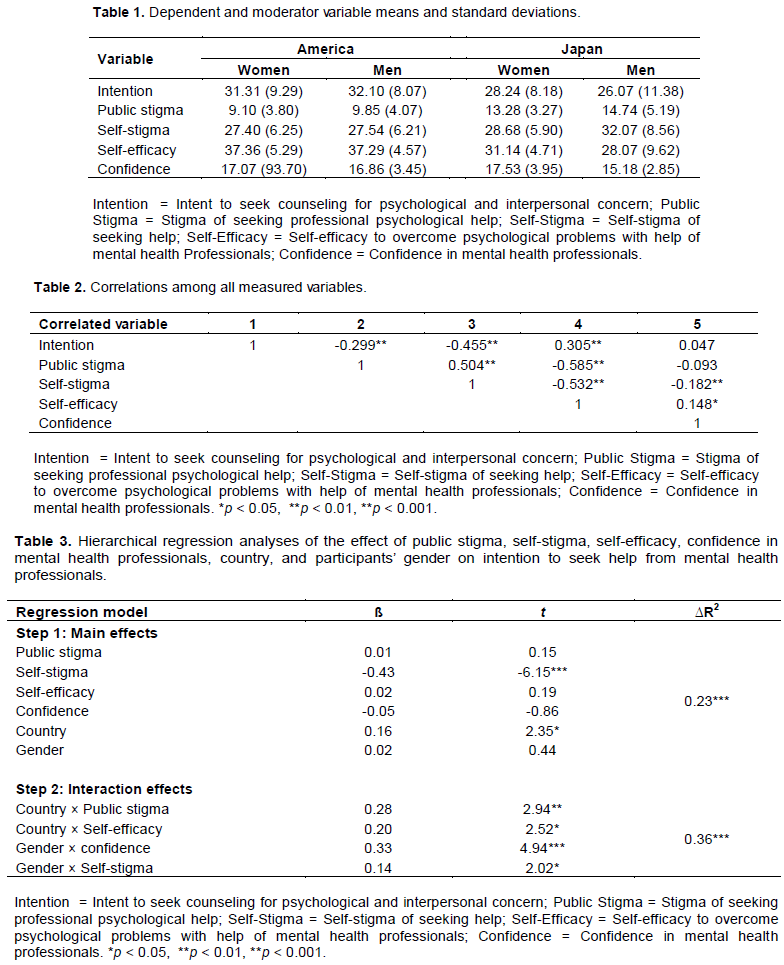 There were some limitations to this study. All participants were college students, making these findings difficult to generalize to other age groups and settings. Moreover, there was a larger than average number of Caucasian participants in the American sample, making it difficult to generalize these findings to other races and ethnicities. However, this study had strong internal reliability within the measures used.

Many people never seek help, or they fail to fully engage themselves when they are seeking help for mental health illnesses (Corrigan, 2004). This could be due to the prevalence of high public and self-stigma and low self-efficacy. Therefore, multiple interventions have been suggested to reduce both public and self-stigma and to increase self-efficacy. Many studies on these topics have not been longitudinal, and future researchers should conduct longitudinal studies to examine the lasting effects of these interventions. It is further necessary to monitor any changes, both short and long term, in the societies in which these interventions are utilized. Interventions should also address gender differences when examining whether interventions increase intentions to seek professional mental health help. Interventions such as mass media campaigns, targeting groups with large amounts of mental illnesses, and programs like “Ending Self-Stigma” should be considered and implemented in areas such as schools, colleges, and the broader public to help reduce both public and self-stigma around seeking help for mental health problems.