Laboratory report on quantification of anacardic acids from pistachio hulls 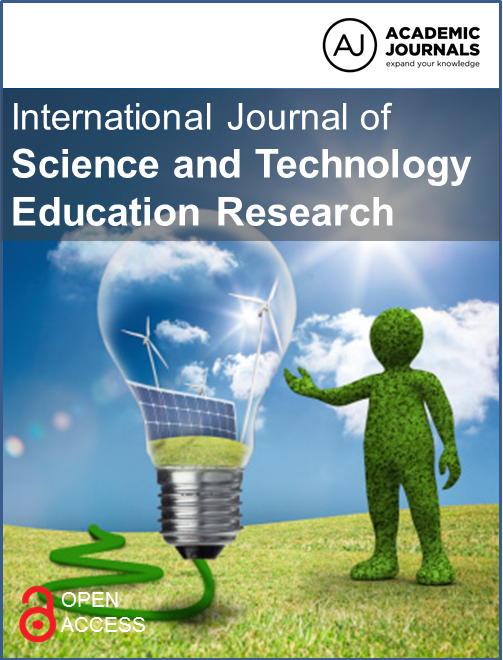 Pistachio hull contains anacardic acids. It is a salicylic acid with a side chain either saturated or unsaturated. This work focused on the efficient extraction of anacardic acids using solvent. Six aliquots were weighed and extracted with hexane, ethyl acetate, and mixture of H2O/MeOH/HCl. Hexane was the most efficient solvent due to its ability to dissolve the anacardic acids. Only one anacardic acid standard was used to quantify all of them since the side chain does not affect the wavelength to a greater extent. HPLC-DAD was used for quantification purposes and HPLC-MS and retention time were used for qualitative analysis.

Pistachio is a member of the cashew family found mostly in Central Asia and Middle East. The tree produces seeds that are consumed as food (https://en.wikipedia.org/wiki/Pistachio). Pistachio hull (external soft shell of pistachio) is the major part of pistachio by-product that has a high content of bio-active compounds (such as polyphenols, tocopherols, dietary fibers, essential oils, and unsaturated fatty acid) with antioxidant properties and health-promoting effects. Pistachio hulls were previously shown to contain a large diversity of phenolic compounds, including gallotannins, flavonoids, and anacardic acids. Among these, gallic acid, β-glucogallin, penta-O-galloyl-β-D glucose, quercetin 3-O-galactoside, quercetin 3-O-glucoside, and anacardic acids represent the most abundant constituents (Sevcan et al., 2017). Anacardic acids are phenolic lipids, chemical compounds and a mixture of several closely related organic compounds. Each consists of a salicylic acid substituted with an alkyl chain that has 15 or 17 carbon atoms. The alkyl group may be saturated or unsaturated. The non-linear structure, unsaturation in the alkyl chain and substitution to phenolic group open up new vistas in the innumerable applications in dyestuffs, foods, flavors, ion exchange resins, paints, plasticizers and polymers (Syed et al., 2020). Figure 1 is an image of anacardic acid. 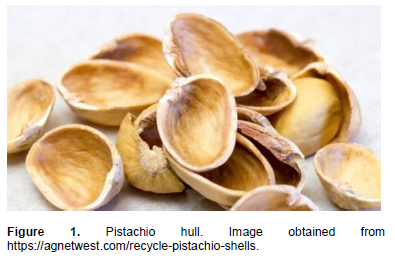 “Anacardic acid is a hydroxybenzoic acid that is salicylic acid substituted by a side group at position 6. It is a major component of cashew nut shell liquid and exhibits an extensive range of bioactivities (Figures 2 and 3). It has a role as an EC 2.3.1.48 (histone acetyltransferase) inhibitor, an apoptosis inducer, a neuroprotective agent, an EC 3.4.22.69 (SARS coronavirus main proteinase) inhibitor, an anticoronaviral agent, an antibacterial agent, an anti-inflammatory agent and a plant metabolite. It is a hydroxybenzoic acid and a hydroxy monocarboxylic acid. It derives from a salicylic acid (National Center for Biotechnology Information, 2022).” It is a yellow liquid partially miscible in alcohol and ether but nearly immiscible in water (Kumar et al., 2002). Cardanol and cardol are some derivatives of Anacardic acid; they are phenolic components and less effective in biological activity. Figure 4 is anacardic acid and its derivatives. This work focused on the extraction of anacardic acid from pistachio hulls using three solvents: hexane, ethyl acetate and mixture of H2O/MeOH/HCl in order to know the efficient solvent. 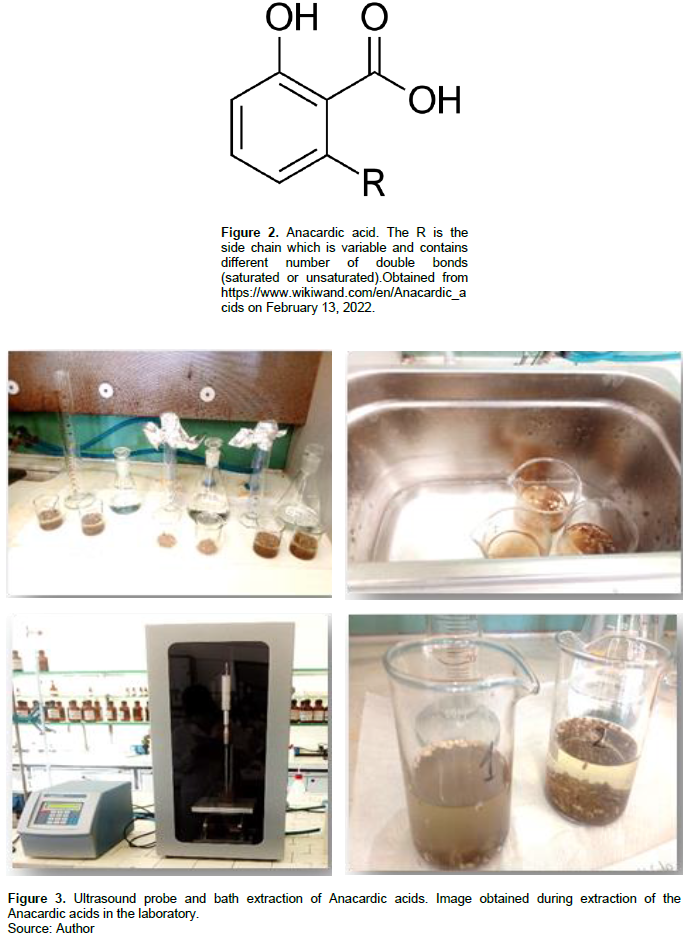 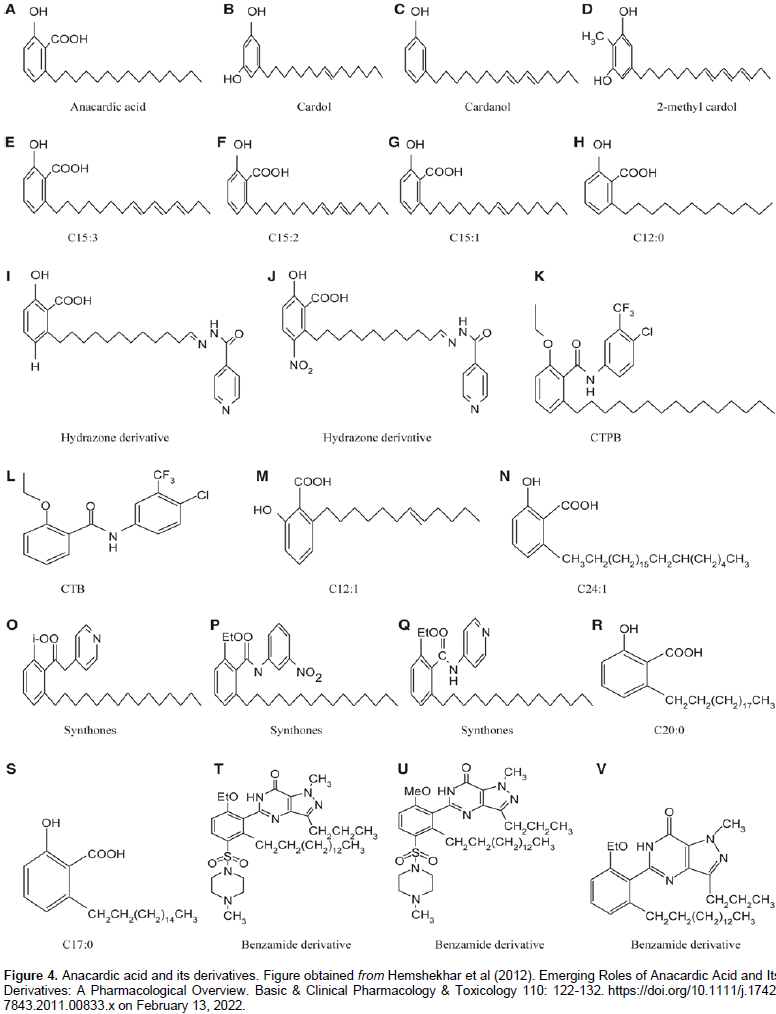 Maria et al. (2012) also obtained greater concentration of monounsaturated Anacardic acid using supercritical CO2 (40°C, 300 bar, 4 h). This supports the argument that, the efficiency of extraction depends on the degree of unsaturation and polarity of the extracting solvent. The penetration of the solvent in the Anacardic acid solute is less efficient and extraction is poor. Considering the two extraction techniques utilized in this work, the ultrasound probe gave a better extraction results compared to the bath. This could be due to the excessive temperature and pressure exerted when the bubble bursts on the sample matrix surface. Ultrasound probe uses sound waves to create bubbles of the extracting solvent which bursts and releases pressure, increasing the penetration in the solute. The HPLC-DAD (Figure 5) gave an absorbance of around 310 nm and HPLC chromatogram (Figure 6) of retention time range of 50-60 min of anacardic acids. This wavelength is similar to all Anacardic acids due to less effect of the side chain in its absorbance-hence only one Anacardic acid standard was used for quantification. The HPLC-MS (Figure 7) gave the mass spectra of the Anacardic acids as recorded in Table 2. The most abundant m/z ratio is 373.2 which is also reported in the literature as 373; it corresponds to Anacardic acid 17:1 with an absorbance of 312 nm. 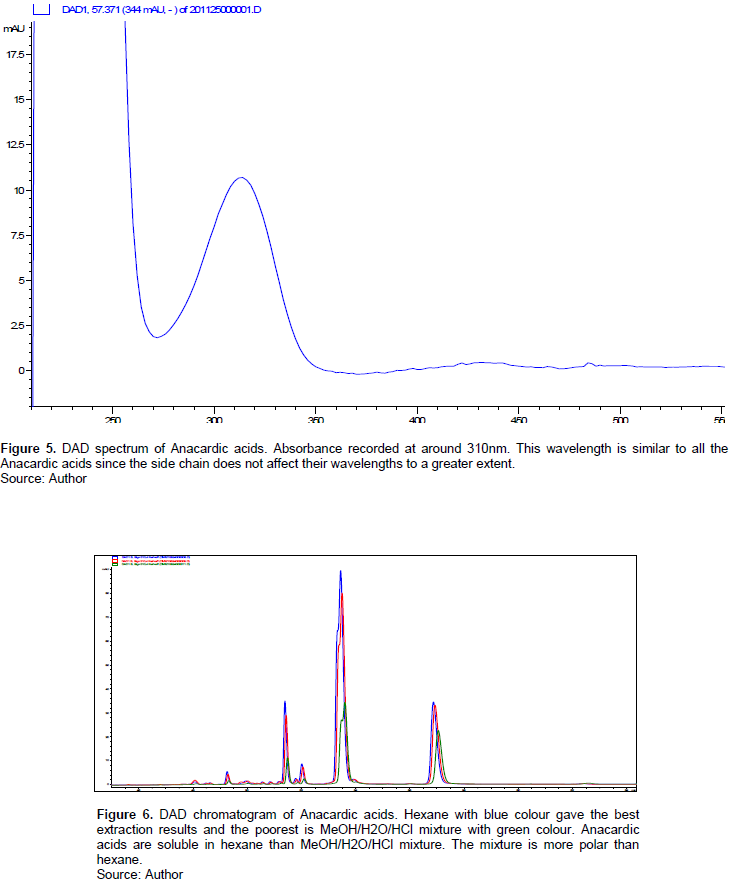 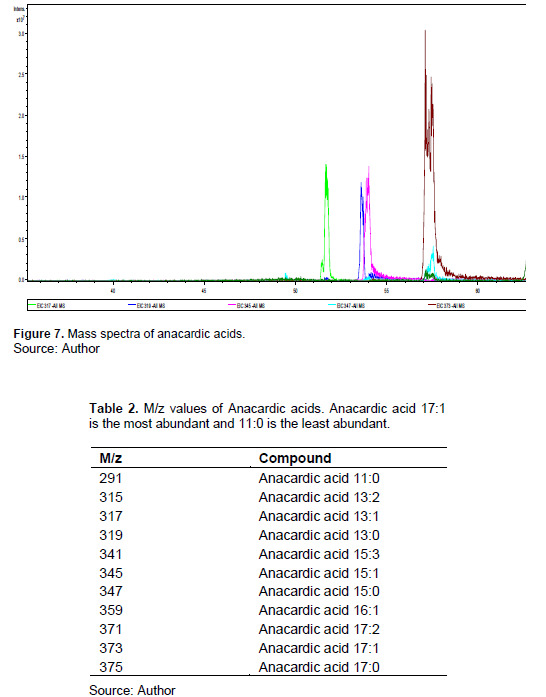 Anacardic acid 11:0 gave the lowest m/z ratio of 291 and UV/vis absorption of 308 nm. Anacardic acid 15:0 and 17:1 have very close results with retention time of 92 and 92.2 min and absorbance of 311 and 312 nm, respectively but different m/z values. To improve the analytical method, the column and stationary phase can be changed in order to improve the chromatographic performance. Also, the time for the extraction of the Anacardic acids using the MeOH/H2O/HCl mixture must be lowered in order to prevent the extraction of the polar matrixes, thus gallic acid, β-glucogallin, penta-O-galloyl-β-D glucose, quercetin 3-O-galactoside, and quercetin 3-O-glucoside. With HPLC, the diode array detector can measure the entire wavelength range which is an advantage. In a case where the retention time of two analytes is very close, by comparing the UV/vis spectrum and also mass spectra, the analytes can be identified. Also, UHPLC is another alternative which is faster than HPLC and with small column particle sizes could improve the resolution of the peaks. Moreover, a replicate extraction for each solvent could be performed for better results. Maceration method using methanol only as extraction solvent could also be an alternative. In this case, the pistachio hull is broken into smaller pieces and soaked with the methanol in an airtight container (Aliefman et al., 2021).

The author has not declared any conflicts of interests.

All chromatograms, mass spectrum and table of results were obtained from Dr. Manuela Cortese-Laboratory technician at University of Camerino.