The study was designed to provide a baseline data on status of woody species diversity, local knowledge in use and the influence of socioeconomic factors. Interview and discussion with key informants and formal survey with structured questionnaires were employed to collect primary data. The assessment of tree species richness was done by inventorying trees at the sampled plots of the different agroforestry practices within three social classes. Secondary data were collected from various sources. Data were analyzed by using SPSS 13.0 computer program. The result indicated that most farmers preferred planting trees around homesteads, woodlots and boundaries. The type of trees planted were those meant for fuel wood, construction and improvement of soil. Wealthy farmers maintained more number of trees than medium. The highest proportion of tree stems/ha was found in boundary plantation followed by woodlots. Terminalia brownii, Moringa stenopetala, Eucalyptus species and Cordia africana were widely maintained. Tree species richness was significantly correlated to farm size. Smaller farm size and limitation of knowledge were the major constraints to manage tree species. It can be concluded that local knowledge in use, wealth status, experiences, resources and needs of farmers were must to be considered to promote agroforestry technologies.

As world population increases, the need for more productive and sustainable use of the land becomes more urgent. World’s concern is to find alternative agricultural systems that are ecologically sustainable, economically feasible and culturally acceptable to local communities. Agroforestry is a land use systems which deals with the integration of trees on farms and in the agricultural   landscape   that   diversifies    and   sustains production for increased social, economic and environmental benefits of all land users at all levels (Abiot and Gonfa, 2015; FAO, 2015, 2017; Steven, 2019).

The multiplicity of agroforestry products and services which necessitated different management strategies by various social classes in part of traditional land use systems have the role in sustaining crop production, biophysical  environment,  livelihood  and  the  household economy (FAO, 2015; Nair, 2014). In all these land use systems, trees have the dominant role to play a sustainable agriculture and environmental protections (Melese and Abay, 2017).

Though the contribution of traditional agroforestry practices is high in the study area, farmers are lacking information on tree/shrub species diversity management and major socioeconomic factors that influence their management under various social and economic settings. Therefore, this study was designed to provide a baseline data that enhance land users knowledge on traditional management and tree diversity changes in traditional agroforestry practices with a particular emphasis on status of woody species diversity and their uses, local knowledge in use and the influence of socioeconomic factors on tree diversity management.

The study was conducted in Demba Goffa District, Gamo Gofa Zone of South Ethiopia. Geographically, it is located between 8° 11' 21" to 8° 71' 84" N latitude and 42° 19' 35" to 43° 89' 86" E longitude with altitudinal range of 1350 to 2600 m. a. s. l. Demba Gofa is located at a distance of 258 km from Arba Minch, 284 km from Hawassa and 516 km from Addis Ababa (Figure 1). The district has 102,807 ha of land area coverage with 38 Peasant Associations. Total populations is 103,837 (F = 52,270) with total household of 23,149 and person/house hold ratio is 4.5. The district includes highland (7.8%), midland (15.8%) and lowland (76.4%) agroecological Zones. The daily mean minimum and maximum temperature is 17.4 and 28.4°C while the mean annual temperature is 23°C and rainfall is 1300 mm. The rainfall is dispersed throughout the year into two rainy seasons called belg (March-May) and meher (July-November) with small showers in February. The maximum rainfall is in April and October. Mixed crop-livestock production system is the major economic activity in which teff, maize and sweet potato are the main crops grown as well as oxen, cows, donkeys and shoat are the major animals reared. 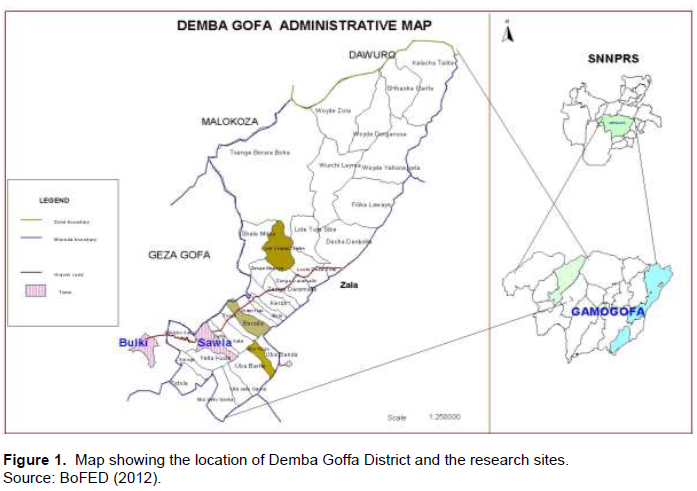 The sampling procedures include two data collection components: household survey and tree assessment at three Peasant Associations (which is the lowest administrative unit).

The   purposive   sampling   procedures   were  used  to  select  the Peasant Associations (PAs). The sampling procedures focused on the existence of similar traditional agroforestry practices. Accordingly, Lote, Gaila, Chalbie, Borda and Uba Pizigo PAs were selected. Within each PA, two villages with the similar agroforestry features were also identified.

To categorize the selected households into wealth classes, six key informants (ordinary farmers who are knowledgeable and experienced about the area) were selected by using snowball method (Nirmalya et al., 2017). Wealth ranking were used to characterize the households at each village in to poor, medium and rich. The criteria used to classify farmers to wealth classes were farm size, number of oxen, cows, shoats and the other income sources. The names of each household (HH) heads in the village were written down on a card and key informants grouped them in to three wealth classes. From each social category, 10% of HHs were selected randomly and totaled as poor (43), medium (30), and rich (17).

On selected farms, inventory was restricted to trees/shrubs species in homegardens, woodlots, parklands and farm boundaries. Counting and assessing the distributions of trees/shrub species on sampled plots of those agroforestry practices were used to estimate species richness. At farm level, the total areas of different agroforestry practices were estimated. For each practice, different species of trees/shrubs were counted and recorded. The proportion of trees/shrubs species were estimated by making sample counts on systematically selected quadrats or rows and extrapolated to the area it covered. The sample size of home gardens 10 m × 10 m (100 m2), woodlots 10 m × 10 m (10% of the total area), parklands complete count made on 40 m × 30 m and farm boundary (10% of the total length).

Household questionnaires at household level and tree species assessment at farm level were used to collect data. The botanical names of the trees/shrubs were identified by researcher himself, using tree identification manual and agroforestry data base. Secondary data was obtained from the recent reports, documented and other on line sources.

Quantitative data was analyzed by using Statistical Package for Social Sciences. The influence of socioeconomic factors on richness of tree species was compared by using Pearson’s correlation coefficient. Variation in composition of the tree species was calculated by using Sorenson’s Similarity index (Abiot and Gonfa, 2015).

The highest tree species richness was maintained at homegardens and boundary plantations followed by woodlots   and   parkland.   The   mean   tree   stems  per sampled plots of the all wealth categories are compared; values were 2.8, 3.1 and 3.3 for poor, medium and rich, respectively (Table 1). The number of tree stems per farm increase with size of the farm land. As well, access to the labor and management also increases the richness of the trees species. Farm size, labor access, knowledge of tree management and preference of farmers are key factors which maintain high tree species diversity. There are other studies supporting similar trend, for example, Abiot  and   Gonfa   (2015)   in    Dellomenna   District   of Southeastern Ethiopia, reported that well organized irrigation activities, planting pattern, site characteristics, management strategy, socioeconomic factors and farmers’ preferences for the tree use increase the tree species diversity.

The highest mean number  of  the  tree stems per ha was recorded in order of Anno > Gaila > Chalbie villages while the highest number of stems per ha were found in the farms of rich and followed by medium and poor (Table 2). Similarity, the values of number of stems recorded at agroforestry practices was in the order of boundary > woodlot > homegardens > parkland. This might be due to the farmers’ preference and land allocation for those practices within different social classes. Farmers with large farm size can plant/maintain more trees/shrubs than those with less farm size.

The similarity of tree/shrub species maintained was summarized by Sorenson’s Similarity Index (Table 3). Based on the presence or absence of tree species in the sampled plots, the highest similarity in tree species composition was maintained between Gaila and Anno villages while the lowest species similarity was recorded between M/Gojo and S/Tsala villages. The result indicated that the majority of tree species are common to all sites but differences exist in the distribution of less common species.

Use diversity of trees

The tree/shrub species identified in all villages are used for a wide  range  of  purposes.  Among  the  many  uses, seven major uses of the trees/shrubs in all villages have been identified (Table 4). The major uses of trees/shrubs are fuel wood, construction materials, fodder values, timber, and food and soil fertility improvement. Similarly, respondents agreed that trees are also used for shade, fodder, medicine, windbreak, fences and recreations. Five exotic fruit tree species and 15 timber tree species were identified to be used for income generation. To supplement the basic roles of trees, farmers retained a few species of native trees, which they considered most important, fast growing, requires low input are left in the farm. This is in line with the report of FAO (2015, 2017) and Nair (2014).

The effect of socioeconomic factors on tee species richness

Different tree management practices are exercised by farmers in the study areas. Among these management practices, commonly used are pruning (56.1%), coppicing (39.3%), and pollarding (45.1%) which help farmers to attain sustainable use of trees/shrubs in any agroforestry systems (Table 6). Farmers commonly  prune  Terminalia brownii (97%), Cordia africana (65.2), Acacia polyacantha (53%), Ficus sycomorus (42.3%) and Grevellea robusta (19.6%) to produce tree products (Table 6). This result indicated that pruning and pollarding are more proffered not only to permit a sustained yield of wood over a long period but also minimizes the competition among the components in the system. Similarly, Norainiratna et al. (2016) stated that proper pruning maintains trees’ health and structure provide safe environment and enhance aesthetic values.

According to the key informants, the soil is exhausted and does not give much production; this view was verified by all respondents. To overcome soil fertility problem, farmers have a remarkable knowledge and strategies of selecting tree species for soil fertility management. As to the key informants and respondents, trees with huge leafy biomass, easily decomposable, thorniness and fast growing are more preferred (Figure 2). Similarly, they stated that Eucalyptus species have both adverse and beneficial effects. Concerning the adverse effects, all respondents  agreed  only   when   planted   near   to  the agricultural crops, on grazing and degraded lands. On the other hand, Eucalyptus spp. are sources for income generation and construction materials when planted on woodlots or plantations on selected farmlands. To maximize the beneficial effects and minimize the adverse effects of Eucalyptus spp., farmers use their own knowledge of management. The result of this study indicated that the existence of remarkable knowledge for managing and enhancing soil fertility. The present result is inconsistent with the study made by Madalcho and Tefera (2016) who reported the role of farmers’ knowledge on soil fertility management in Wolayta Zone, Ethiopia.

Although farmers plant trees, maintain tree diversity and manage them for a wide range of uses, there is a trend of decrease in woody species diversity in the area. Shortage of farmland, lack of knowledge, seed sources, market access, and the ownership right of trees are the main challenges encountered in managing tree diversity (Table 7). This is in line with reports of Jacobson and Shiba, (2014), FAO (2015) and Rahman et al. (2017). They stated that market and resource access, management skills, insecured land tenure, poor extension services and extent of farmers’ knowledge limits the willingness of farmers to maintain tree diversity.