Rehabilitation of degraded lands through plantations is at the frontline of natural resource management in Ethiopia. However, plantations have been faced with various challenges mainly attributed to poor survival rate of tree seedlings. Hence, this research was conducted in Tanqua ‘Abergelle and Weri Leke Wereda’s with the objective of screening tree seedlings for their survival rates under field conditions. Tree seedlings that were mostly produced in nurseries of the Woredas were first identified and analyzed. One watershed from Tanqua Abergelle and two watersheds from Weri Leke were selected to undertake further plantation trials. Pits were prepared one month ahead of plantation. The collected data was analyzed using simple descriptive statistics. Accordingly, almost all seedlings reduced their number at each sequence of inventory periods. The growth of Moringa stenopetala and Eucalyptus camaldulensis were better than the others in Weri-Leke. Eucalyptus camaldulensis recorded the highest growth performance (60.4 cm) followed by Acacia lehay (46.3 cm) in Weri Leke. The seedlings of Moringa stenopetala, Leucaena leucocephala and Faidherbia albida revealed relatively lower survival rates in Abergelle. However, Ziziphus spina Christ (L.) Desf., Acacia tortilis and Parkinsonia aculeata showed higher survival rates (>80%). Moringa stenopetala and Casuarina equisitifolia showed the lowest survival rates (<40%) in Weri-Leke. On the other hand, A. lehay, Gravillea robusta and Eucalyptus camaldulensis revealed better survival rates (c. 60%). Even if further research is still required, tree species that survive > 50% should be considered for plantations in the study areas, and improved post-planting attention and management.

Today reforestation and afforestation are not only a national issue but also an international one. This is because existing forest stock cannot satisfy the demand for the direct services made by human populations, such as fuel wood, agricultural tools, food, etc. and afford indirect advantages such as mitigating climate change and providing ecological services (Derero et al., 2011; Kissinger et al., 2012; Dent et al., 2013). In past centuries human   intervention   of  forests  were  thought  to  be  of negligible consequence. Densities of human populations were then low. As the number of people rapidly increased and changed forest into agricultural land (FAO, 2017; Cunningham and Beazley, 2018). Moreover, the flux of peoples to communal forests to collect fire wood and materials for agricultural tools created high pressure on natural stands. As the forest cover continued to decline, the processes operated with the heightening demand for animal forage and crop returns. Even the honey  obtained today from bees is expected to be very different from what it was in past decades, in terms of its quality as well as quantity (Thomas and Bekele, 2003; Mekonen et al., 2015). This is due to the fact that there were different flowering tree species from today, a historical fact well known to even farmers. Beyond this, the dwindling of forest coverage leads to many other environmental problems such as decreasing water supplies from springs, accelerated erosion (which this leads to loss of fertile top soil), and other associated problems. Understanding this situation, the Ethiopian government has been giving due attention to replacing forest trees with new plantations. The number of seedlings being planted each year has increased in recent times (Winberg, 2010; Hughes, 2017; MEFCC, 2018). To reduce erosion effects in Ethiopia, soil and water conservation practices have been promoted at the farm level and watershed scale through mass-community mobilization programs (Bekele et al., 2018).

In Ethiopia, deforestation has been a challenging problem connected to land degradation (Teketay, 2001; Temesgen et al., 2014). To overcome the problem plantation programs were put into practice all over the country, especially in the Tigray region, in order to rehabilitate degraded areas. Even though this is happening, plantations require time because of the often poor survival rate of planted seedlings, particularly in moisture-stressed parts of the Tigray. Low survival rates of seedlings can mainly be attributable to either the inappropriate choice of tree species and/or agro-ecological unsuitability of the sites. There is also the issue of pre- and post-plantation mismanagement (Varmola, 2002; Appanah et al., 2012). In addition, the species planted two or more decades ago may not be so relevant and effective today. This is likely because, the previous environments have been altering rapidly, and at a rate the planted species could no longer resist, unless the species was able to adjust with the environment. Therefore, screening and identifying tree seedlings that can survive the existing environmental conditions, and even those more extreme that are foreseen will reduce unwanted high losses, and therefore costs, and even create an opportunity to prioritize those that are projected to survive best.

Londo and Dicke (2005) recommend landowners need to be aware of several causes of seedling mortality on implanting, such as failure to open up planting holes to sufficient depth, to avoid roots becoming bent and forced to grow too close to the soil surface. The objective of the present study was to evaluate the survival rate of seedlings of chosen tree species under field conditions.

The  study  was  undertaken  in  Tanqua  Abergelle  and  Weri-Leke woredas (Figure 1), areas which are characterized by their high moisture-stress regime, and shallow and poorly fertile soils. Tanqua Abergelle is located 100 km southwest of Mekelle (13.3° N, 39° E), and  lies Weri-leke is north of it (14°N, 39.1° E). The elevation of the study area ranges from 875 to 2948 m above sea level. The areas are covered predominantly by species of Acacia which are fed on by small ruminants. Sorghum, ground nut, maize, teff and wheat are the main crops grown in the area. 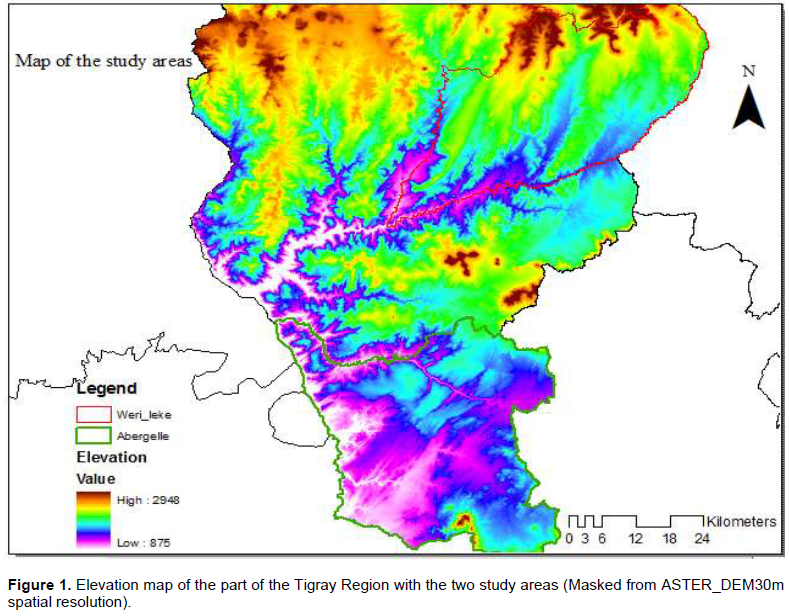 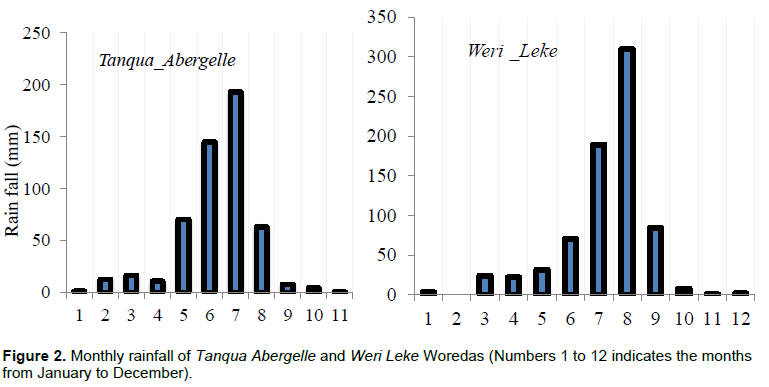 All seedlings that are being planted in the site were the target of the research, and therefore secondary data on survival rates of out planted seedlings needed to be obtained from the agricultural offices of the Woreda’s. Seedlings at nursery site were prepared with a 3:2:1 soil mixture of local soil, forest soil and sand respectively. The soil mixture was added to a 10 cm diameter polythene tube. Accordingly, six tree species from Tanqua Abergelle, and five from Weri Leke, which were those mainly planted in these Woreda’s were identified, and their survival rates evaluated. One watershed from Tanqua Abergelle and two watersheds from Weri leke were selected to undertake the current research. In this study six species (Moringa stenopetala, Ziziphus spina Christ L.) Desf., Faidherbia albida, Leucaena leucocephala, Acacia tortilis and parkinsonia acculata) were selected, 30 seedlings per species, in Tanqua Abergelle (total 180), and in Weri Leke five species (Moringa stenopetala, Eucalyptus camaldulensis, Acacia lehay, Gravillea robusta and Casuarina equisitifolia), 100 seedlings per species in (total 500) were selected. The seedlings were produced in local nurseries, and then planted into the prepared pits (50 cm by 50 cm) of selected site. The seedlings were planted in the first week of July. The planted seedlings are indigenous except Leucaena leucocephala, parkinsonia acculata, Eucalyptus camaldulensis, Gravillea robusta and Casuarina equisitifolia. An inventory including measuring the height of the planted tree seedlings was done at thereafter every four months (November, March, and July) for one year. The recorded data were height and survival rate of the planted seedlings. The collected data were analyzed using simple descriptive statistics.

The most preferred species in the communities in Weri-Leke were Eucalyptus camaldulensis, Faidherbia albida and Gravillea robusta trees. Acacia species and Ziziphus spina Christ (L.) Desf. were also preferred in Tanqua Abergelle since the area was moisture-stressed and the species can withstand the conditions. Moringa stenopetala is being promoted as a new species for on-farm planting in both areas.

The survival rate of the different seedlings which were planted at watersheds was evaluated by conducting an inventory. For this case, an inventory was done three times per year. Almost all tree seedlings reduced their survival rate from the first to the next inventory. This reduction can be attributed to different factors such as poor management (animal trampling and browsing), moisture    stress    and    termites    (particularly    for   E. camaldulensis and M. stenopetala).  The study of Sorecha (2017) identifies the problem of low survival rate of endemic species due to high interference by local peoples across all the watersheds. Londo and Dicke (2006) also show that in many cases, the reason for seedling mortality is mis-planting since shallowly planted seedlings have a decreased chance of survival compared with properly planted ones (Figure 3). 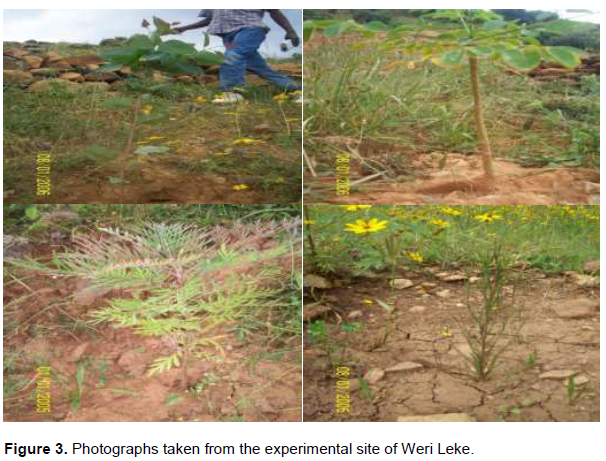 Eucalyptus camaldulensis had the highest recorded growth performance (60.4 cm) followed by A. lehay (46.3 cm) in Weri Leke. However, for the remaining tree species their height at the last inventory was almost same as what it was at the seedling stage before out-planting.  The height of the planted seedlings during the inventory period was very low particularly at Tanqua Abergelle. This could have been due to lack of soil moisture, and the infertile and impermeable soil of the area.  The seedlings of M. stenopetala and Luecaena leucocephala revealed relatively lower survival rates at watershed level in Tanqua Abergelle (Figure 4). The reason for this could have been due here to intervention by animals. However, Ziziphus spina Christ, Acacia tortilis and parkinsonia acculata showed higher survival rates (>80%) because these species have thorns that meant that they could not easily be attacked by the browsers. The planted tree seedlings in Weri Leke indicated that their survival rate was promising and hence, these trees can be planted in the area because of their importance and demand by the local people.  The highest survival rate (Figure 4) was found for each species from the new field work and compared with those rates obtained bym office of agriculture, which were on average c. 50%. This seems to indicate that the reason for poor survival rate of planted seedlings in the area by the government services could mainly be attributed to poor management of seedlings after planting.  Birkinshaw et al. (2009) showed that variation of survival rate was also related to physiology and the adaptation of each tree species. 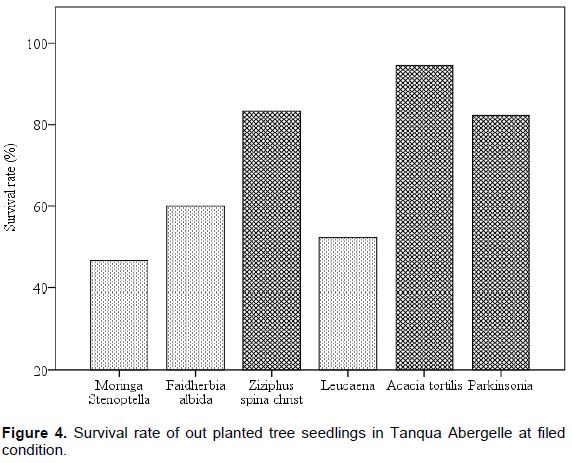 M. stenopetala and Casuarina equistofilia has shown the lowest survival rate (<40%) in Weri-Leke wereda (Figure 5). On the other hand, A. lehay, Gravillea robusta and Eucalyptus camaldulensis revealed better survival rates  (c.   60%).  Except  for  M.  stenopetala  (35%)  and Casuarina equistofilia (30%) that demonstrated lower survival rates, for  the  remaining  tree  species,  Gravillea robusta, Acacia lehay and E. camaldulensis, a comparable result was observed to  the  results  obtained from Weri Leke office of agriculture. The poor survival rate of M. stenopetala and Casuarina equistofilia tree seedlings is mainly due to termite damage and trampling by animals. The study of Sorecha (2017), on survival rates of indigenous trees showed values of c. 38 and 56% for O. africana and H. abysinicca, respectively at three watersheds. Negash et al. (2012) and Tadesse et al. (2014) suggested that maintainance of trees may be influenced by socio-cultural factors, land use and management intensity, and awareness of the local community. Tree species grown in Weri-Leke were mostly different from that of Tanqua Abergelle. For example, Eucalyptus camaldulensis and Gravillea robusta are not commonly produced in nurseries of Tanqua Abergelle. Bishaw (2001) recommends tree planting through agroforestry and social forestry should be an integral part of rural development programs and should provide the community with food, fuelwood, income, and environmental benefits.

For rehabilitation of degraded lands, through either plantations or enclosures, is compulsory to have a healthy and productive ecosystem. The plantation approach has, however, been challenged because of  the poor survival rates, particularly in dry-land areas. In this study the survival rate of L. leucocephala, Z. spina-christi (L.) Desf., A. tortilis, F. albida, P. aculeata, in Tanqua Abergelle, was found better. While at Were-leke E. camaldulensis, Acacia lehay, Gravillea robusta survived at promising performance. At both site supporting watering is required for their survival performance. Even if further research is still required, tree species that survive > 50% should be considered for in planning plantations in the study areas, or plantation strategies should be stratified (e.g. important trees that need frequent management should be planted at homesteads or at around irrigation sites). Further research should be done in the identification of challenges to obtaining higher survival rates and collecting farmer’s perceptions on plantation activities, including the species that are being planted in their areas.