Butterfly pea (C. ternatea L.) has long been valued as a forage legume in tropical Asia, China, Sudan, South and Central America and the East and West Indies (Awadalla and Morsy, 2017; Nadzirah et al., 2018). More recently, C. ternatea has been recognized in the United States and Europe for its ornamental value due to its aesthetically appealing deep blue flowers. Driven by increased interest in  the  utilization  of  the  flower   as    a    food   colorant, nutraceutical, cosmetic, and environmentally friendly insecticide, propagation and production of C. ternatea L. in novel growing environments has been more prevalent than ever (Oguis et al., 2019). The herbaceous perennial plant generally produces an abundance of seeds (Figure 1). Morris (2009) observed a range of between 6 and 3400 total seeds per plant in their assay of 19 different accessions. Despite   generally producing a large number of seeds per plant, C. ternatea L. is sometimes regarded for its low seed germination rates. 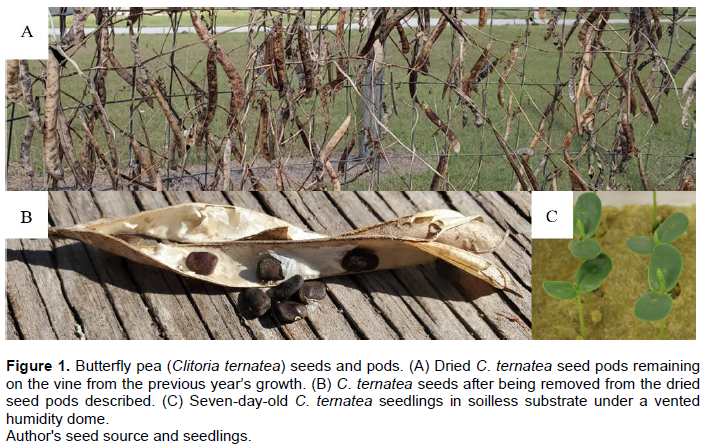 Seed germination percentage is influenced by a variety of internal and external factors that can have significant implications for commercial production operations. Substrate temperature is an important external factor given its substantial impact on germination. Varying optimal germination temperatures (To) have been described for C. ternatea both as a single temperature of 30°C (Selvamaleeswaran et al., 2011) and as a range of temperatures of 24 to 28?C (McDonald, 2002) and 24 to  32?C (Oguis et al., 2019). Germinability (G), also referred to as germination capacity (Ranal et al., 2009), is characterized as the binary response of whether a fully formed cotyledon is visible above the substrate surface at the end of observations (germinated/non-germinated). Recent research examining the influence of substrate temperatures of 21, 24 and 27°C and G values of 93, 88, and 82% respectively, determined a To of 21 to  27°C for C. ternatea (Campbell et al., 2020).

Similar to many legumes, C. ternatea has a waxy seed coat which is impermeable to water and may result in stunted and inconsistent germination. Freshly harvested C. ternatea seeds do not readily absorb water due to their waxy coat (Mullick and Chatterji, 1967). To overcome this, authors stored seed for six months to allow sufficient time for the waxy coat to breakdown naturally, which resulted in an increase by 15 to 20%. Despite this increase, the duration of time necessary for increased germinability may be in conflict with commercial cultivation objectives and resources where storage space and time limit the ability  of aging  seed. Several  methods exist  for increasing the permeability of seed coats with most focused on physical (scarification) or chemical treatments. Mechanical scarification of C. ternatea seed through removal of the seed tip has been found to result in a 30% increase in germinability (G) over the control (Mishra et al., 2006). While treatment with sulfuric acid has been shown to be effective for C. ternatea, it can result in seedling damage and ultimately cause yellowing of cotyledons following germination (Awadalla and Morsy, 2017; Makasana et al., 2016). To address the need for timely and efficient germination, the influence of three substrate temperatures and two seed scarification methods on germination metrics of C. ternatea seed were measured and recorded. Results from this investigation will provide plant producers with critical information necessary to successfully germinate C. ternatea.

Two experiments were performed utilizing the same experimental design. The first experiment occurred 14 to 19 March 2019 and the second occurred 17 to 22 April 2019. For each experiment, 252 seeds were harvested and utilized within 48 h of harvest from a single plant grown in a 31 × 15 m gutter-connected greenhouse with 30% light reducing polycarbonate paneling, located in Apopka, FL, United States (lat. 28.64°N, long. 81.55°W). On 14 March and 17 April seeds for each experiment were treated with one of two seed scarification treatments described by (Mackay et al., 2001); either physical scarification with a small nick to the seed coat using a razor blade (Scar.) or physical scarification with the razor blade before a 24 h soak in deionized water (DI) water (S and S). To evaluate   the  effect  of  scarification  technique  on  germination,  a control treatment was incorporated where seeds were neither scarified nor soaked.

Rockwool (Grodan, Inc., Roermond, Netherlands) was utilized for both experiments given its documented ability to support the successful germination of C. ternatea (Campbell et al., 2020). On 15 March and 18 April, eighteen 14-count rockwool cube sheets were prepared by cutting 98-count cube (25 cm3) sheets into six pieces, discarding the excess. Cubes were soaked for 30 minutes in water adjusted to pH 5.5 using a pH down buffering solution (General Hydroponics Inc., Sebastopol, CA, United States) before a single C. ternatea seed was sown into each plug ~0.6 cm below the substrate surface. The eighteen substrate sheets were then placed into a propagation unit, six per substrate temperature treatment, as described below.

The propagation unit utilized in this experiment consists of a multi-tier shelfed structure (Compact SunLite 3-Tier Garden; Gardener's Supply Company, Burlington, VT, United States), with each of the three shelves equipped with a 19 cm vented humidity dome (HydroFarm, Petaluma, CA, United States), 25 x 53 cm heat mat (Vivosun, ShangHai, China), fluorescent lighting (T5; Sunblaster, Langley, BC, Canada), and a mini thermo-hygrometer (Mondi, Vancouver, BC, Canada) to measure environmental conditions within each humidity dome. A digital hygrometer and temperature monitor (AcuRite, Lake Geneva, WI, United States) was placed on the exterior of the propagation unit to record ambient environmental conditions, with mean temperature and humidity of 22.4 °C (53%) and 22.2 °C (50%) for experiments 1 and 2, respectively. Heating mats were programmed to maintain 21, 24, and 27 °C for the three experimental substrate temperature treatments imposed in the study. Top and side vents of the domes were fully closed to maintain consistent humidity. Lights were positioned ~5 cm from the top of the dome and were run continuously throughout the duration of the experiment, providing photosynthetically active radiation (PAR) at an intensity of between 55 and 90 µmol·m-2·s-1 at the outer corners and the center of the substrate sheet, respectively. Each of the substrate sheets had approximately 50 mL of water applied each day utilizing a laboratory wash bottle (Thermo Fisher Scientific Inc., Waltham, MA, United States).

No differences in germination response were observed between Trial 1 and Trial 2 among imposed treatment replicates, thus data from sequential trials were pooled together. An interaction effect between substrate temperature and seed scarification was not observed, thus independent variables were analyzed separately (Table 2). G values for the substrate temperature variable lacked difference, but an inverse relationship was observed between increasing substrate temperature and associated G values, with 54.8, 50.0 and 48.8% for the 21, 24 and 27°C treatments, respectively. Conversely, the scarified and soaked treatment exhibited a higher germinability (80.9%) than the scarified (45.8%) and control (26.8%) treatments (P < 0.01) (Figure 2). This is supported by values for the interaction effect; despite lacking significance, the 21°C S&S, 24°C S&S, and 27°C S&S treatments had maximal germination at 82.1, 82.1 and 78.6%, respectively (Table 1). 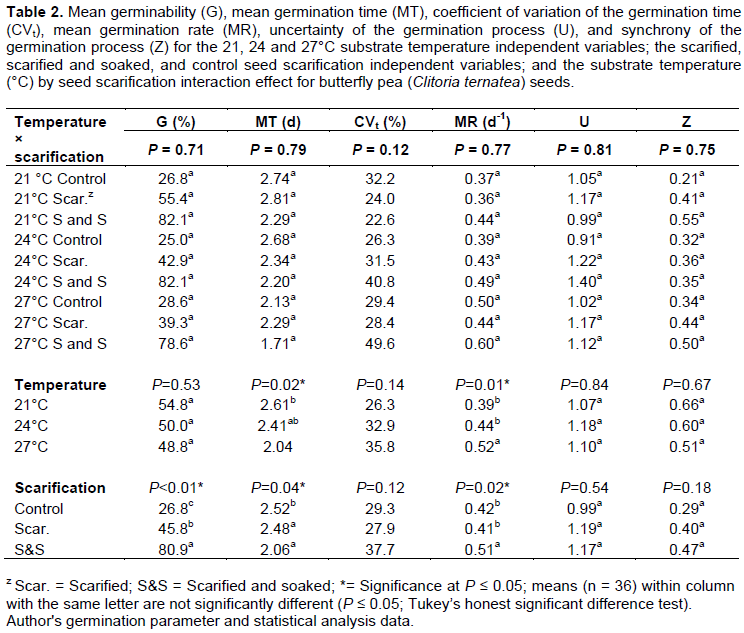 Considering depressed MT and elevated MR values represent a briefer and more rapid germination, differences observed in the MT and MR parameters of the substrate temperature variable indicate that the 21 °C treatment  group  outperformed  the  24  or  27°C groups.

Differences in observed TO, as compared to results reported by McDonald (2002), may also be due to differences in substrate used; McDonald utilized moist seed-test filter paper in petri dishes to achieve germination. Thus, application of reported optimal germination temperature by commercial producers should be carefully implemented based on the media reported in literature.

Differences were observed for G, MT, and MR among seed scarification treatments (Table 2). The scarified and soaked experimental treatment produced a higher percentage of viable, germinated seeds than the scarified or control treatment groups. The scarified and soaked treatment resulted in lower MT and higher MR values than the scarified or control groups, indicating that germination was accomplished in a shorter time and at a faster rate. This conclusion is consistent with published literature where the hard seed coat of C. ternatea required either a dormancy period or mechanical/ chemical scarification to promote germination (Oguis et al., 2019) with previous research finding mechanical scarification in C. ternatea resulted in a 30% increase in G values over the control (Mishra et al., 2006).

Considering MT is a quantifiable value relating to the average time for maximum germination, theoretically optimized germination conditions should result in a shorter germination period and minimal MT value. As the reciprocal, optimized germination conditions should therefore also result in faster average germination rate and maximal MR value. But when considered in the context of the germination capacities, a different trend emerges, with a direct relationship between increasing germinability and mean germination time and rate for the substrate temperature variable and the inverse for the seed scarification variable. This is further supported by the substrate temperature and seed scarification interaction effect. With  the  exception of the 27 °C control (28.6%, 2.13 day), the 21°C S and S (82.1%, 2.29 day), 24°C S&S (82.1%, 2.20 day) and 24°C S&S (78.6%, 1.71 day) treatment groups had the highest G and lowest MT values, respectively. Similarly, with the exception of 27°C control (28.6%, 0.50 day-1) group, the 21°C S&S (82.1%, 0.44 days-1), 24°C S&S (82.1%, 0.49 days-1) and 27°C S&S (78.6%, 0.60 days-1) treatment groups had both the highest G and MR.

The final germination parameters CVt, U, and Z lacked significance (P = 0.14, 0.84 and 0.67, respectively) (Table 2). With an observed increase in CVt with increased substrate temperature, the 21 °C (26.3%) treatment group had less variability in germination than the 24 (32.9%) or 27°C (35.8%) treatments. Relationships between CVt­ and seed scarification were less consistent as the scarified (27.9%) treatment group had more variability than the scarified and soaked (37.7%) or control (29.3%) treatments. Less association was observed for the U and Z metrics; the only values consistent with trends observed for the other germination parameters are the Z values of the seed scarification variable, with the scarified and soaked (0.47) group showing higher synchrony than the scarified (0.40) or control (0.29) groups.

Scarifying and soaking C. ternatea seed significantly improved germination success while reducing germination time. Improvements to these cultivation parameters support advances in efficiency for production of C. ternatea from a seed-based source. Although outside the scope of this investigation, an assessment documenting time and labor to perform these additional germination steps would better elucidate potential return on investment for their commercial implementation. Moreover, an investigation focused on the influence of scarifying and soaking of aged C. ternatea seed would provide insight into the importance of this technique for older seed.

Funding for this work was supported by the National Institute of Food and Agriculture, Hatch project FLA-MFC-006143 and the Florida Agricultural Experiment Station.