Effects of seed pre-treatments on the germination and early growth of Echinops giganteus C.D Adam

This study aims to evaluate the effects of seed pre-treatments on the germination of Echinops giganteus. The pre-treatments used were partial manual removal of the pappus (T1), total removal of the pappus (T2), roasting for 2 min (T3), roasting for 4 min (T4), roasting for 6 min (T5), soaking in water for 6 h (T6), soaking for 12 h (T7), soaking for 24 h (T8) and the control (T0). The experiment was laid out in a completely randomized design with three replicate and 60 seeds per pre-treatment in March 2016 at IRAD Bambui. Germination was monitored daily for a period of one month and data on latent period, germination percentage and germination speed was collected. Early growth parameters such as shoot height (H), collar diameter (CD) and number of leaves (NL) were measured after every two weeks from the 11th to the 17th week while root length (RL) was measured at 17th week. Germination commenced 5 days after sowing for pre-treatments T1, T2, T6, T7 and T8, respectively while seeds from the control pre-treatment (T0), T3, T4 and T5 germinated 8 days after sowing. Germination was delayed and scanty in pre-treatments T4 and T5. Cumulative germination percentage and germination rate were highest in pre-treatment T1 followed by T2 and T6 while T4 and T5 were the least. Height and collar diameter of seedlings was highest in pre-treatments T6, T7, T2 and T1 respectively. Influence of pre-treatments on number of leaves and root length of seedling was not significant. Germination of E. giganteus seeds can be done based on the information given in this study.

The genus Echinops is of the Asteraceae family and consist of about 120 species distributed world-wide (Garnatje et al., 2004). The inflorescence and roots of several Echinops species have been used traditionally in the Ethiopian, Cameroonian and Chinese folk medicine in the treatment of  haemorrhoids  and  disorders related  to the reproductive system due to their phytochemical properties (Menut et al., 1997). There exist several species including Echinops giganteus which is a perennial deciduous herb endemic to Cameroon and Nigeria. In Cameroon, it is distributed in three regions namely West, North West and South West. The  root  is highly exploited as a spice in culinary preparations and is commercialised in local markets (Noumi, 1984). It enriches the diet of man with carbohydrates, proteins, lipids, vitamins and some essential minerals (Tchiegang and Mbougueng, 2010). The root of this plant is also used to treat heart and gastric troubles (Tene et al., 2004). The root has aromatic properties and has been collected and distilled to obtain essential oil which is used in synergy with those from other plants to eradicate weevils in stored grains (Ngamo et al., 2007; Pérez et al., 2010). This species is also of interest to the fragrance and flavour sectors (Menut et al., 1997). E. giganteus, though considered a non-timber forest product in the Congo basin (Tchatat, 1999), methods of propagation are still limited. Domestication of this species is currently under a pilot project in Cameroon (MINEPDED, 2014).

The delay to embryonic growth in many seeds is overcome by subjecting the seeds in appropriate environmental conditions. The major environmental conditions necessary are access to moisture and air, a suitable range of temperature, freedom from high concentration of inorganic salts, poisons and inhibitors; and for some seeds, exposure to a proper sequence of light and dark (Noggle and Fritz, 1986). There is however, a more numerous group of plants where seeds do not readily germinate even though they are placed under favourable conditions of moisture, air, temperature and light. Germination may be delayed for days, weeks, months or even years. Seed pre-treatment can ensure both success in seed germination and germination speed and guarantees that germination be quick and homogeneous (Azad et al., 2011). Azad et al. (2006a, b, 2010a, b), Mabundza et al. (2010) and Yakubu et al. (2014) all reported the effects of pre-sowing treatments on seed germination of several tropical forest tree species. Other findings indicate that the pappus and duration of storage have an influence on the germination of Asteraceae (Etèka et al., 2010; Hale et al., 2010). But there is little documentation available on the effects of pre-sowing treatment of E. giganteus. Though Tankou et al. (2013) noted that it produces abundant seeds, sporadic germination is lacking resulting in a low density of seedlings. Also, being an endangered species (IUCN-2013), little information exist on its germination potential. Establishment of plantations and home garden is restricted due to lack of knowledge of germination potential. Anjah et al. (2016) observed that germination percentages for the seeds of several tropical species can be improved by adopting suitable pre-sowing techniques. Therefore, the objective of the study was to evaluate the best pre-treatment which can speed up the germination of E. giganteus.

This study was conducted at the Institute of Agricultural Research for Development  (IRAD)  Bambui,  Cameroon  which  lies  between latitudes 4°50’ - 5°20’N and longitude 10°35’ - 11°59’ E. It is at an altitude of 1,600 m above sea level with an average minimum temperature of 14°C and an average maximum temperature of 24.6°C. The zone has two seasons, the dry season from November to February and the rainy season from March – October. The average annual rainfall in this centre is about 2,237 mm distributed between mid- March and mid-November with a peak in July and August (Suh et al., 2015).

Seeds were collected at Mbarenka, Lebialem Division of the Western Highland of Cameroon. The infructescence were dried for two weeks under natural sunlight and preserved in polythene bags for later extraction of seeds. One thousand seven hundred and twenty mature seeds were selected from the numerous seeds preserved. One hundred seeds were randomly selected from the lots and subjected to a viability test (Schaal, 2000).

Three seed pre-treatments were done which included the following: Removal of pappus, soaking in water and roasting.

Five hundred and forty seeds were divided into three groups of 180 seeds each and subjected to roasting for duration of 2 min (T3), 4 min (T4) and 6 min (T5).

The seeds were placed in an open pot and roasted on fire for the respective durations (Banda et al., 2006). Finally, five hundred and forty seeds were also divided into three groups of 180 seeds each and soaked in water at ambient temperature at three different durations, that is, for 6 h (T6), 12 h (T7) and 24 h (T8), respectively (Yakubu et al., 2014).

Seeds were sown triple (ST) in each sowing spot, 30 cm apart and at same depths in each subplot (Figure 2). After sowing, weeding was done twice a month manually for seventeen weeks. Germination was monitored daily for data collection. 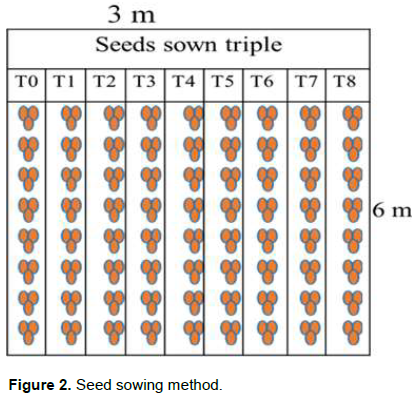 Height of shoot (H) and collar diameter (CD) were measured after every two weeks from the eleventh week for a period of 6 weeks. Three seedlings were randomly selected in each pre-treatment and tagged for data collection throughout the experiment. Thus, a total of 81 plants were  tagged. Height  of seedlings was measured using

a metre rule from the base to the apex of the stem while collar diameter was measured 10 cm above the ground using a calliper. Number of leaves on the stem were counted with respect to duration. At the 17th week, the seedlings were uprooted and root length equally measured with a metre rule.

Germination parameters such as latent period (LP), germination rate (GR) and germination percentage (GP) were presented using tables and figures while on early growth parameters were subjected to Analysis of Variance (ANOVA) using the statistical programme STATGRAPHIC where the least significant differences (LSD) between the mean were detected and separated using the Duncan’s New Multiple Range Test (DNMRT) at p≤0.05. 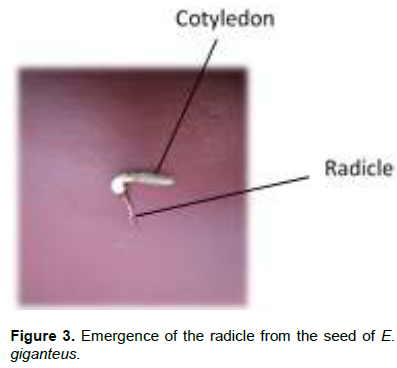 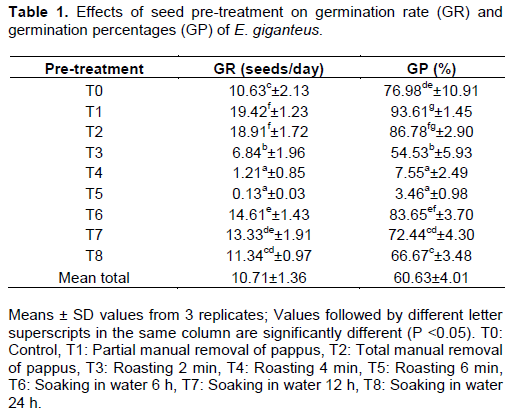 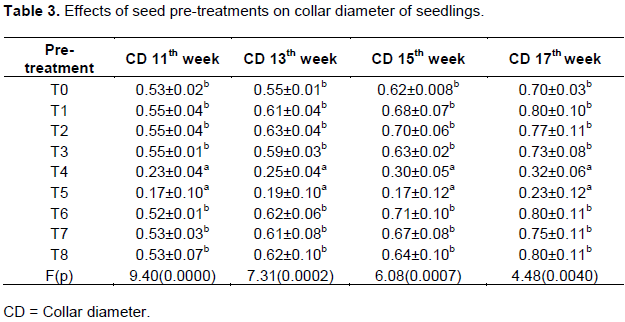 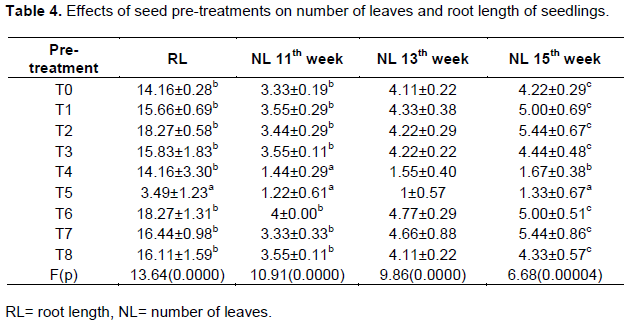 Breaking of seed dormancy through appropriate, cheap and easily handled methods of pre-treatment remain a very important tool for rapid domestication of endangered useful species by local people. Most tropical forest species have recalcitrant seeds which do not germinate readily even under favourable conditions, hence the need for pre-treating seeds (Olayode and Gbadamosi, 2009).

Removal of pappus and soaking in tap water at ambient temperature enhanced germination and seedling vigour compared to other pre-treatments. This is similar to the findings of Muhammad et al. (2014) who had a better germination percentage and emergence of Bitter Gourd Cultivars. The possible fact for better percent germination by priming may be that it stimulates series of biochemical changes in the seed that are essential to initiate the emergence process like break down dormancy, hydrolysis and metabolism of growth inhibitors, imbibition and activation of enzymes (Ajouri et al., 2004). In addition, the pappus serves as a barrier which influences germination and early growth of seedlings in Asteraceae. The barrier was rendered less effective when the seeds were soaked in water. The presence of the pappus is an indication of immature embryo which causes dormancy in some species (Karlsson and Milberg, 2008). The relatively low germination percentage observed in seeds of some species might probably be due to a mixture of mature and immature seed. The separation of the two types of seeds showed that mature seeds, deprived of their pappus, did not show dormancy (Etèka et al., 2010). This is contrary to the findings of Hale et al. (2010) who showed reduced germination with pappus removal in Taraxacum officinale. Devising appropriate technique that can be easily adopted by local farmers remains a veritable means for rapid domestication of useful tropical species. The results obtained in this study are similar to those of Mabundza et al. (2010) under pre-germination treatments of Passiflora edulis seeds soaked in 98% sulphuric acid and tap water.

Equally, Azad et al. (2011) reported a germination percentage of 83% for Acacia auriculiformis seeds soaked in hot water (80°C) for ten minutes. Furthermore, the latent period, germination speed and percentage observed in this study was similar to those obtained by Anjah et al. (2015) in the propagation trials of Aframomum melegueta in varying temperature, sowing media and sowing methods. In addition Yakubu et al. (2014) had enhanced germination rate of 12 to 62 days for Garcinia kola seeds soaked in water at different duration.

The pappus play a protective role on the seeds of E. giganteus in the field though it hinders germination. Results obtained in this experiment indicate that partial and total removal of the pappus enhanced germination of the seeds, height and number of leaves of the seedlings. Soaking of seeds in water at ambient temperature for six and twelve hours also gave the next best results in the promotion of germination, early growth and development of seedlings. Roasting of seeds did not effectively improve germination, early growth and development of seedlings compared to the control. The pre-treatment adopted in this study can be easily utilized by farmers in the cultivation of E. giganteus which will make the species to be readily available.

1) Effects of soaking in warm water and sulphuric acid on germination and early growth of E. giganteus should be carried out.

2) Effects of substrates on germination and early growth of E. giganteus should be carried out.

3) Effects of organic and inorganic fertilizers on growth performance of E. giganteus should also be carried out.

4) Effects of storage duration on germination of achene of E. giganteus should also be carried out.

The authors are grateful to the Department of Plant Biology, University of Dschang, for ameliorating the quality of this work. We also appreciate the Institute of Agricultural Research for Development (IRAD) Bambui, Cameroon for the land provided for the field work and the equipment given for measuring parameters.