The progressive increase in antimicrobial resistance was the major attribute among human pathogens that has given rise to the need to investigate other sources of therapy from various sources such as medicinal plants. The aim of this study was to assess the antibacterial activity of crude extract of leaves and bark of Millettia ferruginea against human pathogenic bacteria (Staphylococcus aureus and Shigella boydii) and Candida albicans. Maceration technique was employed for extraction of the plant by using solvents of different polarity levels. Antibacterial and antifungal activities of each crude extracts were evaluated at a concentration of 100, 200 and 300 mg/ml via agar well diffusion assay. The standard drugs of 30 μg/ml and 1 ml of DMSO were used as positive and negative control respectively. Minimum inhibitory concentration was also determined. The result of the study indicated that all the three solvent extracts of leaf of M. ferruginea did not show antibacterial activity for test pathogens. Acetone and chloroform bark extracts showed antibacterial activity at all three concentrations. Minimum inhibitory concentration (MIC) for acetone bark extracts were 12.5 and 25 mg/ml for S. aureus and S. boydii respectively and also for chloroform extracts 25 and 50 mg/ml for S. aureus and S. boydii respectively. Ethanol bark extracts showed antibacterial activity only for S. aureus at higher concentrations (200 and 300 mg/ml) with minimum inhibitory concentration (MIC) of 200 mg/ml. Acetone extract at 300 mg/ml was insignificantly different from the antibiotic Gentamicine (P = 0.12). The present results concluded that out of three leaf extracts and three bark extracts, only chloroform and acetone extracts of bark have antibacterial activity against either S. aureus or S. boydii, while none of the prepared extracts had antifungal action.

Ethiopia is a center of diversity for a number of flora and fauna, the sixth center of biodiversity in the world. The country  is  endowed  with  rich flora,  having  more  than 6,500 species of vascular plants out of which an estimated 12% are endemic and about 887 species are used as medicinal plants. The majority (80%) of Ethiopian people depends on traditional medicine for their health care, and more than 95% of traditional medicinal preparations made from plant origin (Ashenif, 2017). Medicinal plants contain many special substances and chemicals (micro components) having therapeutic activities used for medicinal purpose achieving curing different diseases (Bajpai and Agarwal, 2015). About 80% of the world’s population, especially Asian and African countries use plant extracts or their active constituents as folk medicine for some aspect of primary health care in traditional therapies (Wangkheirakpam, 2018), since they tend to have less toxicity, less environmental effects and are more affordable than purchasing expensive conventional drugs. So, with its economic importance, alternative treatment has gained a respectable position (Karunamoorthi et al., 2012).
Millettia ferruginea is endemic to Ethiopia (Thulin, 1983; Azene, 2007; Belachew, 1993; Biruhalem et al., 2011, Choudhury et al., 2016), belonging to the family Leguminaceae, sub-family Papilionnodeae (Azene, 2007). In Ethiopia, two sub species of Millettia are found namely, M. ferruginea and M. darassana (Thulin, 1983). The distribution of M. ferruginea is between 1,000 - 2,500 m above sea level (MacLachlan, 2002), commonly found in the northern part of the country (Thulin, 1983) with multipurpose tree as all parts of M. ferruginea (fruit, leaves, stems and root) possess traditional medicinal action to treat amoeba, earache and nails infection, tooth aches and gonorrhea (Belachew, 1993; Fisseha et al., 2009) or skin infection (mujele) having antimicrobial and insecticidal activity (Eyob et al., 2010; Choudhury et al., 2016).
Despite its seed oil is used as nutritive source for human food rich in amino acids (Berhanu and Amare, 2012, 2013), this seed extract has a toxic effect on adult ticks in vitro (Choudhury and Yoseph, 2015), while leaves, flowers and twigs of M. ferruginea are important feed resource for ruminants; cattle, sheep and goats (Takele et al., 2014). Therefore, the main aim of this study was to assess the antibacterial activity of the crude extract from M. ferruginea leaves and bark against selected bacterial pathogens and Candida albicans.

Description of study area
The study was conducted at Dilla, the administrative center of Gedio Zone in the SNNPR, Ethiopia. The town is located at 89 km far from Hawassa, the capital city of SNNPR and 359 km far from Addis Ababa, which is situated at 1123.47 km2 at 6° 21’ - 6° 24’ north latitude and 38° 17’ - 38° 20’ east longitude. It is found in kola agro ecological zone with an altitude of 1400 km above sea level and annual temperature ranging from 22 to 29°C (Eshetu and Basha, 2015).
Plant sample collection
Fresh leaves and bark of M. ferruginea were collected around Dilla University main campus in December 2018 from natural habitat and the plant was identified by a botanist. Thereafter, fresh leaves and bark of the plant were separately washed with tap water followed by distilled water to remove dirt and soil particles. The plants were cut into small pieces and shade dry at room temperature under complete aseptic conditions with a careful and continuous follow up to avoid any contamination. The dried samples were then grinded by using sterilized electric grinder and the powder was sieved with (0.5 mm) mesh to obtain fine powder. Finally, the powder was weighted and kept for further use.
Crude extraction
Crude extraction was carried out by maceration protocol described by Felhi et al. (2017) with slight modification. Extraction was started from high polar solvent chloroform, followed by acetone and ethanol by keeping the polarity level. 200 g of finely grinded leaf and steam bark of M. ferruginea were soaked in different flasks containing solvents such as acetone (Sigma Aldrich, Germany), chloroform (Sigma Aldrich, Germany) and ethanol (Merck, United Kingdom) in 1 to 5 (w/v) ratios separately. The mixtures were left at room temperature for a period of at least 48 h with frequent agitation on orbital shaker with 180 rpm until the soluble matters were dissolved. Each macer (the damp solid material) was filtered using sterile cotton followed by filter paper (Whatmann No.1). After filtration, solvents were evaporated using Rota vapor at 40°C and crude extracts were obtained. The resulting crude extracts were collected in capped labeled bottles and dried at room temperature. Finally, the extracts were measured and kept in refrigerator at 4°C until use for further experiments.
Antimicrobial activity test
Bacterial strains
Three different media: Salmonella Shigella Agar (SSA), Mannitol Salt Agar (MSA) and Muller Hinton Agar (MHA) were used for this study according to Quinn et al. (2002), to re isolate clinical isolates of S. aureus (ATCC13311) and S. boydii (ATCC9207) were collected from Ethiopian Public Health Institute, Addis Ababa, Ethiopia.
Fungal strains
Potato Dextrose Agar (PDA) was used for this study according to Packiyalakshmi et al. (2017) to re-isolate clinical isolates of C. albicans collected from Ethiopian Public Health Institute, Addis Ababa, Ethiopia.
Preparation of test solution
The standard crude extracts of leaf and bark of M. ferruginea were further diluted to make three different concentrations in a separate flask according to Packiyalakshmi et al. (2017) with modification as the working stock solutions of different concentrations were 100, 200 and 300 mg/ml. The first working solution was prepared by transferring 100 mg of each extracts to sterile test tube containing 1 ml of DMSO to give a concentration of 100 mg/ml; the second and the third working concentrations were prepared by similar manner. Gentamicine, Ceftriaxone and Clotrimazole of each were used as positive control for Staphylococcus aureus, Shigella boydii and C. albicans, respectively while DMSO of 1 ml was used as negative control and the stocks were stored at 4°C for further use.
Antimicrobial test
The antibacterial potential of the crude extract against the bacterial pathogens were also done by using the method described in Packiyalakshmi et al. (2017) via agar well diffusion technique. Firstly, bacterial pathogens were grown on their selective media, that is, MSA and SSA for S. aureus and S. boydii respectively and incubated at 37°C for 24 h. A few colonies of each strain were transferred with a sterile inoculating loop to a broth culture until turbidity was adjusted to that of 0.5 McFarland turbidity standards. Then, culture of test isolates were streaked on independent surface of already prepared MHA plates by using a sterile swab stick that was used to apply the suspension uniformly. Similar protocol was employed as the antifungal test. Each procedure was repeated three times and average inhibition zone diameter was taken to present results. The measurement of the linear growth of bacterial pathogens and fungus were taken by measuring the linear length of bacteria and fungus growth (mm) from point of origin toward the end of growth. Growth inhibitions were calculated with reference to positive control. Each test was conducted in triplicate to confirm the reproducibility of the observed data.
Minimum inhibitory concentration (MIC) determination
The minimum inhibitory concentration (MIC) of acetone, chloroform and ethanol crude extract of leaves and bark of M. ferruginea on the tested fungal and bacterial isolates were determined using bi-fold dilution (Akinsete et al., 2017) with slight modification, where sterile 6-mm cork borer was used to bore five wells onto prepared MHA plates seeded with the test isolates. Different concentrations of the extracts (200, 100, 50, 25, 12.5, and 6.25 mg/ml) were dispensed into each well and labeled. The preparations were left to diffuse before incubating at 37°C for 48 h. The lowest concentration of the agent that has prevented the growth of the bacteria was taken as the MIC. The zones of inhibition was observed and recorded.

The percent yield of extracts obtained from sample using acetone, chloroform and ethanol gave different yields (Table 1). The highest yield was obtained from ethanol extract of leaf (9.27%) followed by acetone extract of leaf (5.32%), ethanol extract of bark (5.02%) and acetone extract of bark (4.12%).
Antibacterial activity of crude extracts of M. ferruginea against S. aureus and S. boydii were tabulated in Table 2, while all prepared extracts had no any antifungal action
against C. albicans.
Antibacterial activity of crude acetone, chloroform and ethanol extracts of leaf and bark of M. ferruginea against S. aureus and S. boydii
The results showed that, all the three different concentrations of acetone leaf extracts were inactive and do not inhibit the growth of both selected bacterial pathogens. On the other hand, the acetone crude extracts of bark of M. ferruginea showed antibacterial activities. The mean zones of growth inhibitions against S. aureus at a concentration of 100, 200 and 300 mg/ml are 11.67±0.58, 14.50±0.18 and 16.17±0.62 mm, respectively (Figure 1). Similarly, the mean zones of growth inhibitions against S. boydii at a concentration of 100, 200 and 300 mg/ml were 9.33±0.58, 12.40±0.58 and 15.33±0.58 mm respectively (Figure 1). Standard antibiotics, Gentamicine and Ceftriaxone, which served as positive controls, also inhibit the growth of test bacterial pathogens at a concentration of 30 μg/ml with maximum mean inhibition values of 20.33±0.58 and 22.67±0.289 mm against S. aureus and S. boydii respectively.
Also, the chloroform extract of bark of M. ferruginea showed growth inhibition of S. aureus and S. boydii at different rates for different concentrations but less than its acetone extract bark showing inhibition zone of 15.67±0.58, 12.33±0.58 and 9.83±0.29 mm at 300, 200 and 100 mg/ml (Figure 2).
While no growth inhibitions were recorded for all test pathogens at the three concentrations of ethanol extract either of leaf or bark of M. ferruginea (Table 2), the size of growth inhibition zones ranged from 9.67 ± 0.29 mm at 300 mg/ml and 8.00 ± 0.00 mm at 200 mg/ml (Figure 3). 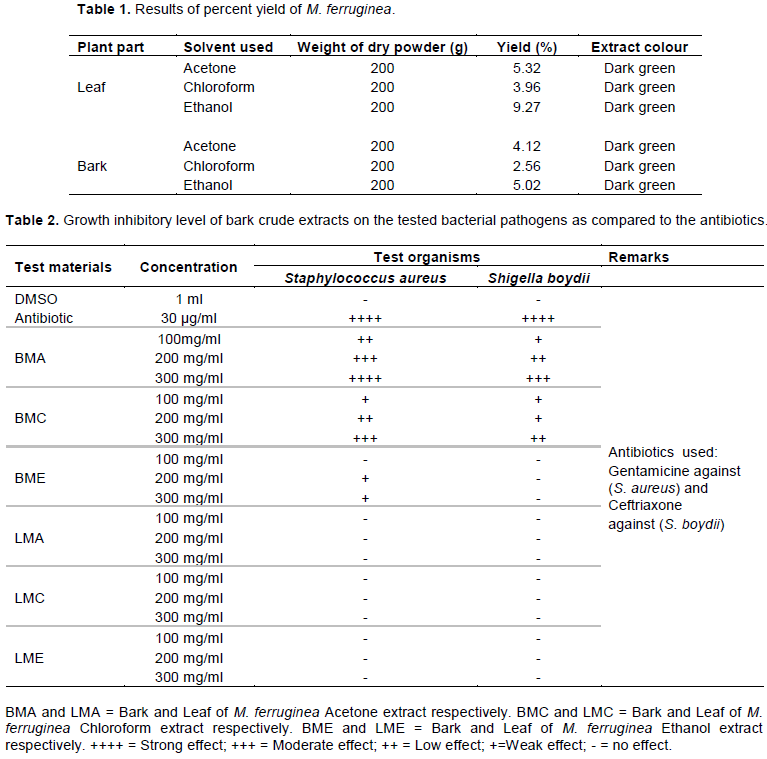