Diabetes mellitus (DM) is one of the most severe metabolic disorders characterized by hyperglycemia as a result of a relative or an absolute lack of insulin secretion, or/and insulin action on its target tissue (Leila al., 2007). There are other symptoms, including hyperlipidemia, which can lead to the development of microvascular complication of diabetes with major risks of morbidity and death (Taskinen, 2003).

There are mainly two types of diabetes, type 1 and type 2. Type 1 diabetes is known as insulin-dependent-diabetes-mellitus (IDDM), and results from a cellular mediated autoimmune destruction of the β cells of the pancreas leading to absolute insulin deficiency  (Gavin  et al., 1997). Type I diabetes commonly occurs in child-hood and adolescence, but can occur at any age. This form of the disease may account for 5 to 10% of all cases of diabetes (Stumvoll et al., 2005). Type 2 diabetes, which is responsible for more than 90% of all diabetes patients and previously referred to as non-insulin dependent diabetes mellitus (NIDDM), or adult-onset diabetes, is a term used for individuals who have insulin resistance and usually have relative insulin deficiency (Gavin et al., 1997). The risk of developing this form of diabetes increases with age, obesity and lack of physical activity. Obesity and type 2 diabetes are closely correlated.

Most of the conventional synthetic chemical antidiabetic drugs have low rates of response; they have also severe adverse effects. Accordingly, it is necessary to introduce more effective hypoglycemic agents with lower adverse effects.

In our previous studies, the effects of B. ferruginea hydroethanolic extract were proven on some parameters of metabolic syndrome in type 2 diabetes (Bakoma et al., 2011); there was lack of apparent toxicity, acute or sub-chronic, at doses greater than those that induce an effect in animal disease models (Bakoma et al., 2013). The ethyl acetate (EtOAc) soluble fraction of the hydroethanolic extract from the roots of B.  ferruginea were found to be the most active fraction on   diabetes and catechins were isolated (Bakoma et al., 2014 ; 2015). To the best of our knowledge, the active ingredients with antidiabetic activity and their probable mode of action have not been investigated so far. The present study was designed to identify the active compounds of B. ferruginea using streptozotocin induced diabetic mice.

The roots of B. ferruginea were collected in August 2012 from Tsévié area, 35 km North East of Lomé (Togo). Botanical authentication was confirmed at the Department of Botany, University of Lomé, where a voucher specimen of B. ferruginea was deposited at the herbarium (No. 83, 2010).

Male Swiss mice (BW 30 to 35 g) purchased from Elevage Janvier (France) were maintained under standard conditions with a 12 h light/dark cycle and had free access to standard laboratory diet and water. Prior to initiation of dosing, all rats and mice were acclimated for 7 days. After, mice were randomized to different groups on the basis of their body weights. Principles of laboratory animal care as described in the European Community guidelines were followed (Official Journal of European Union L197 vol. 50, July 2007).  This study was approved by the ethical committee on animal experimentation of the University of Bordeaux.

Drugs and vehicle were administered daily by gavage for 21 days, and water and food intake were recorded.  During the experimentation, blood glucose level was measured on the first, 7 th, 14th and 21st day after 12 h fasting using Free style papillon Glucometer.

OGTT  was  performed  after 21  day   treatment,  during  which  mice  were  fed  with normal  diets. Mice were fasted over night; glucose (2 g/kg) was fed 30 min after administration of drugs.  Blood was withdrawn from tail-vein at 0, 30, 60 and 120  min   after glucose  loading.  Blood glucose level was measured immediately using Free style papillon Glucometer.

GraphPad Prism 5.00 (USA) software was used  to process the results. They are expressed as mean value with the standard error of the mean (M ± E.S.M). These results are analyzed using the variance analysis (ANOVA) followed by the Tukey posttest, to compare the batches. The materiality threshold is set at P <0.05.

The anti-hyperglycemic effect of EGC and EGCG was evaluated in STZ-induced diabetic rats. Blood glucose level was measured in normal and experimental rats on days 0, 7, 14, 21 of drug treatment. Streptozotocin administration (100 mg/kg) led to over 2.8 fold elevation of glycemia in a time-dependent manner (p<0.001) compared  to  normal  mice.  STZ-induced  diabetic  mice treated respectively with ethyl acetate fraction (50 mg/kg wt), EGC (10 mg/kg wt) and EGCG (10 mg/kg wt) for 3 weeks showed a significant (p<0.001) decrease in glycemia compared to diabetic control group. Normal control mice did not show any alteration in their glycemia through the duration of the experiment significantly (Table 1). 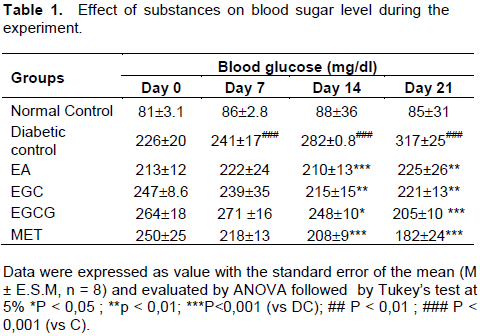 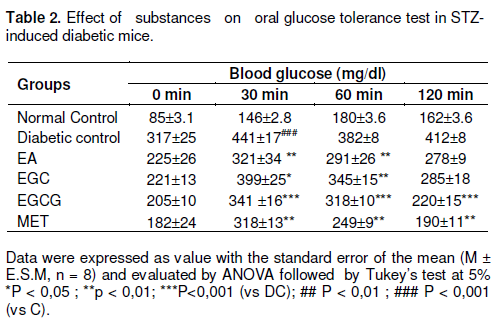 EGC  and  EGCG were tested in diabetic mice. To induce diabetes in vivo, Streptozotocin were used, a molecule produced by Streptomyces achromogenes; it is a substance with antineoplastic, oncogenic and diabetogenic activities (Like and Rossini, 1976). It destroys selectively pancreatic-cells by oxidative stress (Szkudelski, 2001; Long-Ze, 2008). Streptozotocin induces type 1 or Type 2 diabetes depending on administered dose (Islam and Loots, 2009). Multiple low-dose of STZ leads to diabetic rats resembling type 1 diabetes in humans characterized by insulitis with accumulation of inflammatory cells and degranulation of cells. A single high-dose administration of STZ causes toxicity to cells, with inflammation free islet lesions and degranulation, which is like type 2 diabetes (Islam and Loots, 2009).

This effect can be the result of intestinal glucose absorption with extra pancreatic action including the stimulation of peripheral glucose utilization or enhancing glycolytic and glycogenic process.

Hypercholesteremia and hypertriglyceridemia are factors seen in the development of atherosclerosis and coronary heart disease which are some complications of diabetes (Ananthan et al., 2003). Catechins and metformin significantly reduced serum triglycerides and total cholesterol in STZ-diabetic mice. Thus, it is reasonable to conclude that catechins of B. ferruginea could modulate blood lipid abnormalities.

Liver is the vital organ of metabolism, detoxification, storage and excretion of toxic agents and their metabolites. ALT and AST are markers of liver function (Ohaeri, 2001). An increase in the activities of ALT and AST in plasma might be due to the leakage of these enzymes from the liver cytosol into the blood stream which gives an indication of hepatotoxic effect of STZ Ramesh et al. (2010).  Treated  diabetic  mice  showed  a reduction of these enzymes activities in plasma compared to the diabetic untreated mice and consequently alleviated liver damage caused by STZ-induced diabetes. Significant reductions in the activities of these enzymes in treated diabetic mice indicated the hepato protective role in preventing diabetic complications.

Some authors indicate also that catechins are hypoglycaemic  properties  and  act  to control  diabetes  (Kao  et  al.,  2000; Mai  and  Chuyen,  2007).  Catechins are powerful antioxidants; increase the sensitivity of cells to insulin, inhibit the lipogenic enzymes and fat absorption, (Thielecke and Boschmann, 2009; Roghani and Tourandokht, 2010; Cherniack, 2011; Rains et al., 2011; Sae-tan et al., 2011). These data confirms our hypothesis that catechins are responsible for the activity of the ethyl acetate fraction and suggest the mechanism by which this fraction is useful in the treatement of type 2 diabetes.