In Africa and Cameroon in particular, people tend to use medicinal plants as the first approach to cure their illness or disease. In order to improve the safety and the progressive integration of those plants in our health systems, it is important to set a system and protocol that would permit an easy characterization, quality and safety control of medicinal plants through a standardization of their recipes. Thus, we develop a Pharmacognosy and phytochemical study of Albizia ferruginea pulps and complete by a monograph for each plant. A macroscopic and microscopic analysis of the drugs is done, followed by a study of the weight loss due to desiccation. Furthermore, the ratio of ashes in the powders was investigated in conformity with the European pharmacopeia. We further extract and perform a phytochemical screening. From the macroscopic analysis, it is observed that the pulp was strong, fibrous crack and powder brown with an aromatic smell. The micrographic analysis shows the presence of various tissues such as suber, fiber, liber, sclerotic cells as well as the calcium oxalate. The ashes percentage of A. ferruginea powder is 1.16%, whereas the weight loss due to desiccation is 7.6 % and inflation indices, 4 mL. The phytochemical screening showed the presence of alkaloids, flavonoid, polyphenols, mucilages, anthocyanins, and saponins. The information gathered throughout this study will contribute to the fast identification, quality control, and characterization of A. ferruginea pulps.

According to the World Health Organisation (WHO), infectious diseases are causes for more than 17 million death per year and causes for more than half the dead casualty occurring in Africa (Organisation Mondiale de la Sant´e, 2006). Those infectious diseases are rapidly spraying and causing more skin conditions in the continent. Due to the low level of income in Cameroon and the high cost of curing skin conditions, it is necessary to investigate new methods, substances, plants at low cost that could be used to efficiently cure certain types of skin conditions. In order to achieve that goal, it is important to do further investigation into the field of medicinal plants (Kouadio et al., 2015). It is reported that up to 80% of African regularly use traditional medicine (Observatoire de la sant´e en Afrique, M´edecine traditionnelle, Revue du bureau r´egional de l’OMS pour l’Afrique, 2003). Traditional medicine is widely used in Africa, due to the wide availability of plants, and their low cost. Therefore it is estimated that we have a ratio of one traditional healer per 500 patient compare to one medical doctor for 40,000 patients in average (Organisation Mondiale de la Sant´e, 2006, 2014).
Strat´egie de l’OMS pour la m´edecine traditionnelle pour 2014-2023). Abondo-Ngono et al. (2015) reported in 2012 on a census of traditional healers in the Centre region of Cameroon. Hence they launched the mapping of Cameroonian traditional healers (Abondo-Ngono et al., 2015). Subsequently, Abondo-Ngongo et al. (2015) have chosen a certain traditional recipe that is actively used to cure ringworms. The recipe contains a medicinal plant locally called ”Evouvou” in Ewondo language, scientifically known as Albizia ferruginea (Abbiw, 1990) (Figure 1 and 2). This study seek to improve the quality of the recipe commonly used by traditional healers, in order to make these process much valuable and safe for the patients. This work consists of making a data base and specification of medical materials, in order to build a monography data base for the plant and the recipe. Therefore, the standardization reference of the powdered pulps of A. ferruginea was used. 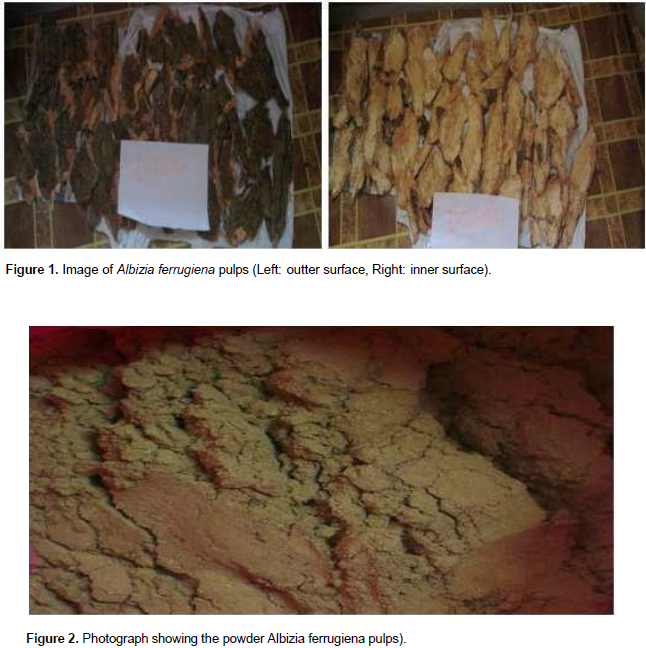 Vegetal material
The vegetal material consists of A. ferruginea pulps harvested on February 1, 2016, at Eloundem, located at almost 10 km from the Yaounde city center (add the GIS location of the site). Following the harvesting, a systematic identification of the specimens was made at the Cameroonian herbal data center, then a comparison with the 49871/HNC specimen was made for the A. ferruginea.
Preparation of hydro-alcholic extracts
The pulps were dry for a week in an ambient environment, followed by a grinding to a granular powdered form. A sample of the powder can be used for macroscopic characterization using the conventional method recommended by the World Health Organization (1998). The microscopic characterization allows us to determine the quality of the medicinal plant. Another sample was used for microscopic study following the process described by Blond et al. (2014). A powder mass of 250 g was used for the extract, using a Soxhlet from BEHR LABOR-TECHNIK. Therefore, a mixture of ethanol-water in a volume ratio of 70/30 was used as a solvent. The extract obtained from this extraction was used as phytochemical screening.

Microscopic characterization
Investigation of foreign elements
A powder of mass 400 g was sprayed on a thin film according to the European Pharmacopeia technique (2008). Throughout this characterization, no foreign element was found nor identified.
Powder description
The color was brown with an aromatic odor.
Microscopic analysis
The microscopic analysis showed the crystal of Calcium Oxalate, the fibers in pericyclic forms, the wooden vessel in the spiral forms, the clusters of sclerotic cells, and the suber (Figures 3, 4, 5). The observation wasoptimal with potash (M´ethodes de pharmacognosie,Pharmacop´ee europ´eenne 6`eme ´edition, 2008; P´elissier Y. Travaux pratiques de pharmacognosie micrographie, 2012). 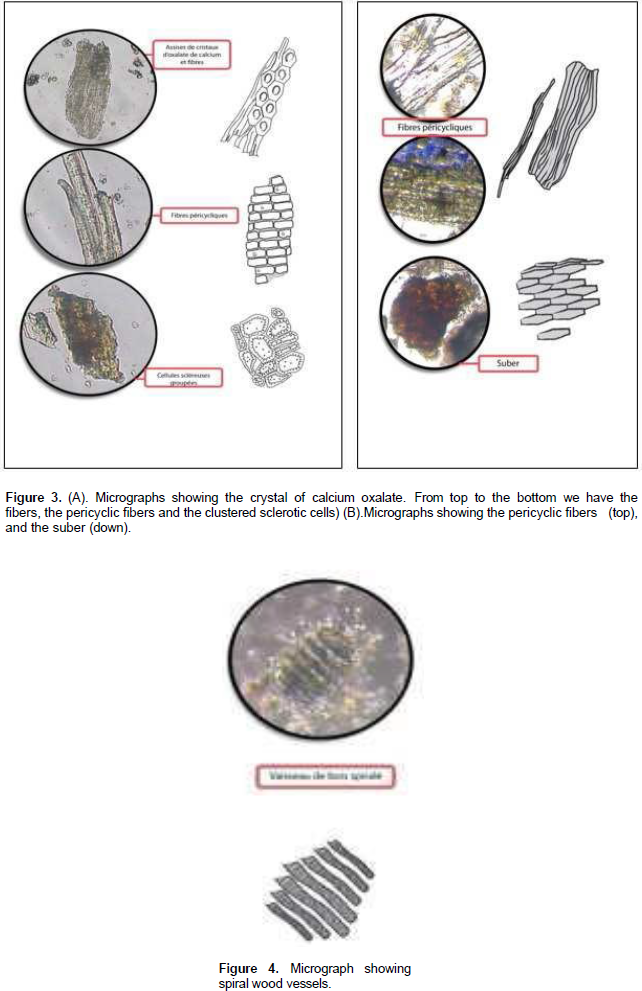 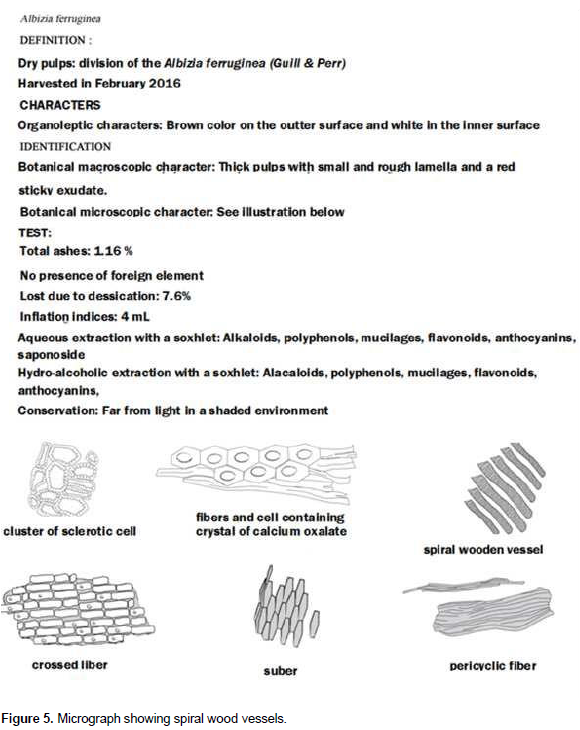 Phytochemical analysis
The loss due to the desiccation of the vegetal drugs, as well as their content in ashes, was evaluated using the 6th edition of the European Pharmacopeia (M´ethodes de pharmacognosie,Pharmacop´ee europ´eenne 6`eme ´edition, 2008). We obtained 1.16% in content of total ashes, and 7.6% in term of lost due to desiccation.
Inflation indices
This was determined using the Guedouari (2011; 2012) method, and was found to be 4 mL.
Phytochemical screening
Investigation of flavonoids
Using the method developed in Alzoreky and Nakahara (2003), 2 mL of a solution of soda was added to 2 mL of extract led to an intense yellow coloration.
Investigation of alkaloids
Using the method proposed by Bagre et al. (2007), 0.5 g of extract was mixed with 0.5 mL of aqueous chlorhydric acid in a steaming bath. After an addition of 3 to 5 drops of a solution of picric acid, we obtained turbidity.
Investigation of polyphenols
Using the method of Bagre et al. (2007), a test tube was used to dissolve 0.1 g of vegetal extract in a mixture of ethanol- water. After adding a drop of a 2% of an alcoholic solution of iron chloride, we observed a change of coloration which changes to a greenish yellow.
Investigation of coumarins
Using the method described in Alzoreky and Nakahara (2003), a test tube is used to dissolve 0.1 g of extract in 2 mL of distilled water. The addition of 2 mL of sodium Hydroxide led to an orange coloration.
Investigation of anthocyanins
Using the method described in Alzoreky and Nakahara (2003), a test tube was used to dissolve a 0.1 g extract in 2 mL of distilled water. The addition of 2 mL of sulfuric acid led to the apparition of red-orangish which quickly turned to a purple blue, using the protocol of Ayoola et al. (2008).
Investigation of saponins
5 mL of distilled water was used to dissolve 5 mg of extract. We observed the apparition of an important foam with a  thickness greater than a centimeter.
Investigation of terpenes
Pursuing with the protocol of Ayoola et al. (2008), 0.5 g of extract was mixed with 2 mL of chloroform. After adding 3 mL of a solution of sulfuric acid, we observed an apparition of a ring with a brown-red coloration.
Investigation of ”tannins”
Still using the approach from Ayoola et al. (2008), 10 mL of distilled water was added to 0.5 g of extracts. The addition of few drops of an iron chloride led to a brown coloration.
Investigation of mucilage
Following the protocol of Abayomi (2010), 2 mL of extracts was added to 4 mL of alcohol at 90°C. We observed a rising of air bubbles.
Investigation of steroids
Following the protocol of Surendra et al. (2013), 2 mL of extract was added to 2 mL of chloroform. By adding 1 mL of acetic anhydride associated with 2 drops of sulfuric acids led to a formation of a ring colored orange.
Interpretation
In reference to the African pharmacopeia, no foreign element was observed (Tables 1 to 3), hence the good quality of the vegetal drugs used. In the microscopic analysis, the powders of Figures 3, 4 and 5 showed the crystal of calcium oxalate and fibers, the pericyclic fibers, the spiral wooden vessels, the clustered sclerotic cells and the suber. Using anoptical microscope, we further confirm the presence of a fibrous structure, previously seen with the naked eyes. It became optimal when it is done using potash as shown by Kaur et al. (2015), who observed sclerotic cells, prisms, the calcium oxalates, oily globules, and fibers. Those are similar to the work presented by Argarwala et al. (2015) on the powdered pulps which justified the presence of vessels, fibers, grains of starch, xylem and oily globules. The difference observed in the structures could be due to the species.
+ Weakly positive reaction
++ Averagely positive reaction
+++ Highly positive reaction
-Negative reaction 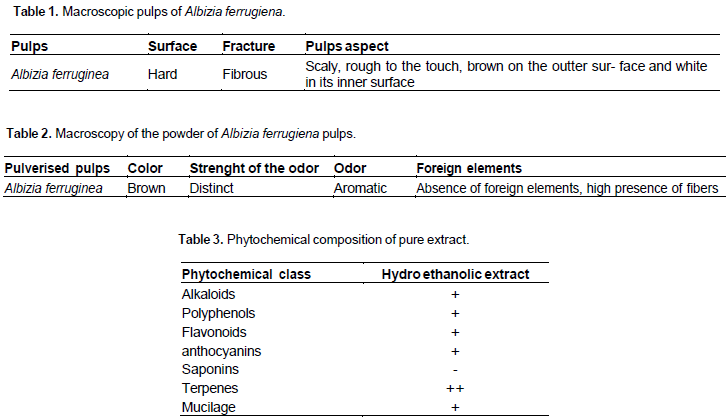 The absence of saponins in the various hydro-alcoholic extracts of pulps can be justified with the type of solvent used. According to Drut-Grevoz (Drut-Grevoz and Laubriet, 2007), using a mixture of ethanol/water (70/30) v/v as a solvent during the extraction lead to a reduction of the polarity of the oxygen by an induction effect. This, therefore, affects the solubility of saponins with the hydro-alcoholic mixture, hence the absence of saponins in the hydro-alcoholic extracts. The loss due to desiccation as defined by World Health Organization (1998), was obtained to be 7.6% for the A. ferruginea, this explains the proper conservation of the vegetal drugs. This is in agreement with the results published by Kaur et al. (2015) showed that the loss due to the desiccation of A. ferruginea could be estimated to be 7.05%. We obtained a total percentage of ashes of 1.16% for the powder of A. ferruginea pulps, which is very different to the 7.59% obtained by Kaur et al. (2015) in the pulps of Albizia lebbeck. This show very small quantity of inorganic materials, which could be linked to the species used. From the elements identified in this work, we draw a monograph of the A. ferruginea pulps as shown in Figures 4 and 5.

The standardization is an important step when it comes to the evaluation and purity of a given sample. The macroscopic and microscopic characterization is amongst the most cost efficient used to established and identified vegetal drugs. Whereas, the phytochemical analysis help to confirm those finding. The information and data recorded throughout this study will be of capital importance during the establishment of our national pharmacopeia.