Parkinson's Disease (PD), a late-onset neurodegenerative disorder, currently affects 10 million people worldwide; more specifically in the US alone, PD affects 1 million people with an additional 60,000 people diagnosed annually (Ball et al., 2019; DeMaagd and Phillip, 2015). PD pathogenesis is attributed to two main biological processes: the degradation of dopaminergic neurons and accumulation of  alpha-synuclein  (a-syn)  in the brain (DeMaagd and Phillip, 2015; Emamzadeh and Surguchov, 2018). These processes work synergistically to induce the characteristic lack of dopamine in PD patients; a shortage that is responsible for PD-induced motor degeneration including tremors, bradykinesia, and impaired coordination (DeMaagd and Phillip, 2015; Emamzadeh and Surguchov, 2018).

One such environmental toxin is trichloroethylene (TCE), a commonly used industrial solvent (Doherty, 2000). TCE’s widespread use in factories has led to its improper disposal and infiltration into over 30% of USA ground and surface water drinking supplies (Doherty, 2000; Zaheer and Slevin, 2011). TCE has also become a prevalent air pollutant (Doherty, 2000). In accordance with Braak’s hypothesis, TCE-induced PD is hypothesized to progress in living organisms through the ingestion of TCE-contaminated drinking water and inhalation of TCE-contaminated air through the gastrointestinal and olfactory tract, respectively (Braak et al., 2003; Khare et al., 2018; Rietdijk et al., 2017; Yulug et al., 2019). More importantly, TCE is also able to infiltrate the blood-brain barrier (BBB) allowing for accelerated neurodegeneration and PD onset (Bonvallot et al., 2010).

TCE’s linkage with PD has led to the slight reduction in its usage; however, unlike other environmental toxins implicated in PD pathogenesis, TCE is still legally permitted for use and still poses a threat to human health (Krasnic, 2017). According to a 2016 study, over 171,000,000 lbs of TCE were still manufactured in the USA in 2015 despite TCE’s notorious neurotoxic properties (Krasnic, 2017). Minimal TCE bioremediation efforts coupled with TCE’s inability to vaporize in groundwater has led to its increased environmental presence (Russell et al., 1992). Despite TCE’s potent neurotoxicity and linkage with PD, scientific literature has not identified any explicit treatment for TCE-induced PD (Figure 1). 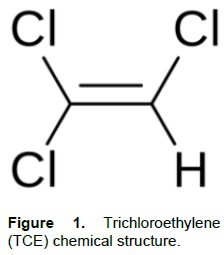 One of the primary biomarkers observed in PD patients is the degeneration of dopaminergic neurons (DeMaagd and Phillip, 2015; Emamzadeh and Surguchov, 2018). Dopaminergic neurodegeneration is singlehandedly responsible for a majority of PD-related motor degeneration (Triarhou, 2013). PD patients can expect to lose up 60-80% of all dopaminergic neurons throughout PD progression leading to the depletion of dopamine within the brain (Cheng et al.,  2010). Due to dopamine’s crucial role in facilitating bodily movements, decreased dopamine levels lead to the progression of PD’s most common symptoms: motor dysfunction in the hands and muscles (Triarhou, 2013).

L-Theanine as a treatment for trichloroethylene-induced Parkinsonism

L-Th’s unique ability to lessen the effects of neurotoxic compounds through downregulating heme oxygenase allows it to significantly reduce SH-SY5Y cell death caused by other environmental toxins such as rotenone and dieldrin (Cho et al., 2008). L-Th can also upregulate dopamine levels in the striatum, hippocampus, and hypothalamus which may allow for the reversal of PD-induced dopamine deficiency and motor impairment (Yokogoshi and Terashima, 2000). Although L-Th is not a known antioxidant, it reduces intracellular reactive oxygen species (ROS) through enhancing cellular antioxidant defense mechanisms (Ben et al., 2015; Deb et al., 2019). L-Th has also shown the potential to  reduce the expression of inflammatory cytokines and increase the motor functionality of motor-impaired organisms (Deb et al., 2019; Li et al., 2016; Thangarajan et al., 2014).

3-(4,5-dimethylthiazol-2-yl)-2,5-diphenyltetrazolium bromide (MTT) cell viability assay was conducted to observe TCE and L-Th’s impact on cell viability. MTT cell viability assay was used to quantify the number of metabolically viable cells by observing the amount of purple formazan formed after the addition of the metabolizable MTT reagent. TCE and L-Th were initially added to cells in a 96-well plate and incubated at 37°C and 5% CO2 for 24 h or 48 h. After the initial incubation, 10 μl of MTT reagent was added to each well and incubated again at 37°C and 5% CO2 for 3 h allowing viable cells to convert the MTT reagent into a purple formazan. Next, 70 μl of Dimethyl sulfoxide was added to each well to solubilize the plasma membrane of the cells allowing for the release of the purple formazan into the extracellular media. This 96 well plate was then placed into a microplate reader (Bio-Rad, USA) and read at 595 nm. This data was then loaded into the Microplate Manager 4.0 software (Bio-Rad, USA). MTT cell viability assay (n=8) was conducted at 24 and 48 h intervals to assess the impacts of TCE and L-Th on cell viability.

Lactate dehydrogenase (LDH) assay was conducted to observe TCE and L-Th’s impact on cytotoxicity via plasma membrane damage. LDH cytotoxicity assay was used to quantify the cytotoxicity of chemicals by observing LDH release into the extracellular region. This LDH release could be measured through the addition of the LDH substrate that catalyzes the conversion of LDH into red formazan. TCE and L-Th were initially added to cells in a 96-well plate and incubated at 37°C and 5% CO2 for 24 h or 48 h. After the initial incubation, 50 μl of cell media was transferred into a separate 96-well plate. Next, 50 μl of LDH substrate was added to each well and placed away from light for 30 min allowing for the LDH to escape into the extracellular region in damaged cells where it is converted into a red formazan. Next, 50 μl of LDH assay stop solution was added to each well to stop the chemical reaction occurring. This 96 well plate was then placed into a microplate reader (Bio-Rad, USA) and read at 490 and 655 nm. This data was then loaded into a Microplate Manager 4.0 software (Bio-Rad, USA). LDH cytotoxicity assay (n=4) was conducted at 24 and 48 h intervals to assess the impacts of TCE and L-Th on cytotoxicity.

Cell image analysis was conducted to observe the effects of TCE and L-Th on cellular density. After TCE and L-Th were added to cells, the 6-well plate was incubated at 37°C with 5% CO2 for 24 h Next, all cell media was removed and 1000 μl of Hema-3 fixative was added into each well fixing the cells. The Hema-3 fixative was then taken out of each well and replaced with 1000 μl of hematoxylin for 2 min to stain the cells. After removing the hematoxylin, each well was rinsed twice with 1000 μl of distilled water. The cells were then observed under x4 and x40 magnifications through an imaging microscope using the AmScope software. All images were quantified through the use of the ImageJ software for cellular density and cellular area. Cell image analysis (n=6) was conducted on a 24 h interval to assess the impacts of TCE and L-Th on cell morphology.

All  experiments were analyzed for significance using the GraphPad  Prism 8.0 software (GraphPad Software; San Diego, CA) through a one-way analysis of variance (ANOVA) test to determine for significance among the results. A post-hoc Tukey test was then used to determine significance between specific treatment groups. P-values of less than or equal to 0.05 were considered significant. All error bars represent a 5% confidence interval. 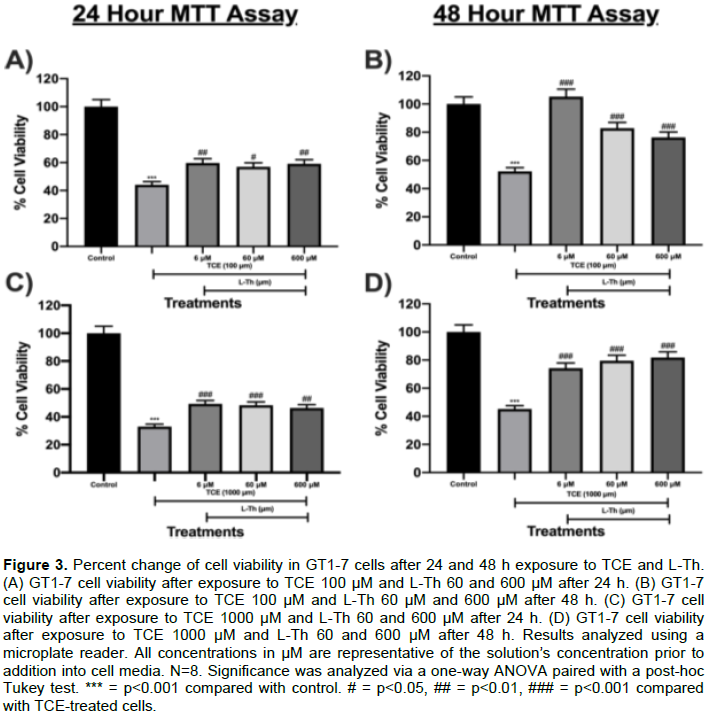 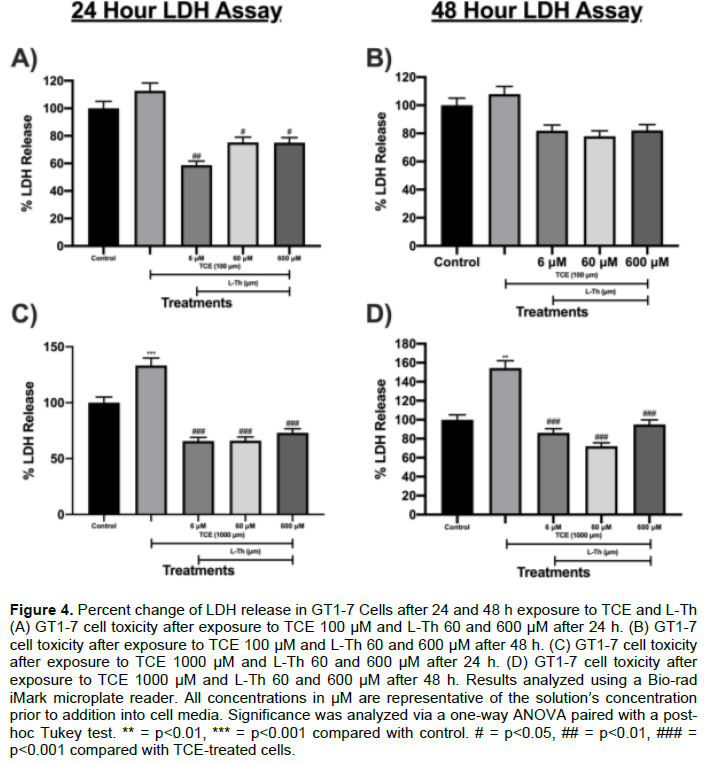 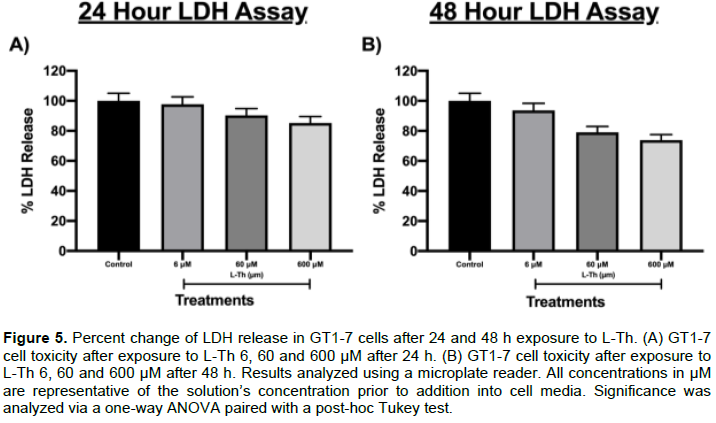 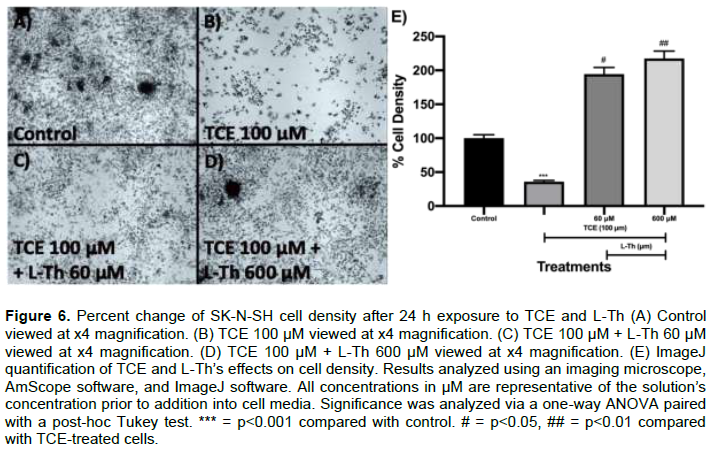 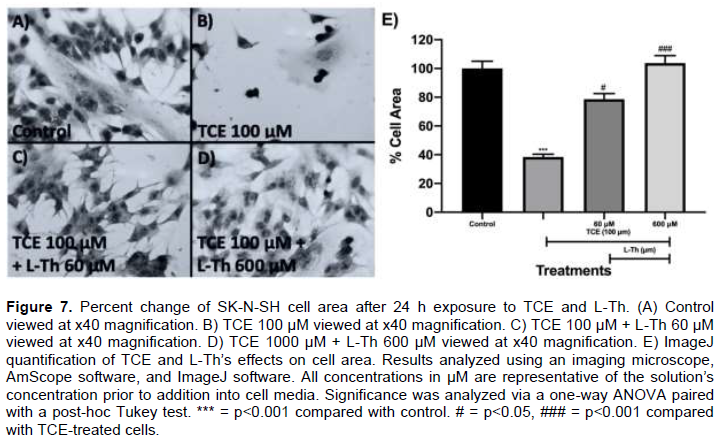 In this study, L-Th impeded the progression of PD in vitro through its hindrance of the most prominent PD biomarkers such as dopaminergic neurodegeneration, dopaminergic cytotoxicity, reduced cell density, and reduced cell area. Thus, this study presents the first specific treatment candidate for TCE-induced PD in scientific literature.

L-Th’s novel inhibition and prevention of PD pathogenesis targets the underlying conditions inducing PD onset instead of temporarily alleviating PD symptoms. Although L-Th was identified as a possible treatment for TCE-induced PD, there are several limitations to this research. Although inferences can be made according to previous scientific literature, L-Th’s specific mechanism of protection in TCE-treated cells was unconfirmed. Additionally, L-Th’s promise as a treatment for TCE-induced PD has yet to be confirmed in vivo.

In   this  study,  L-Th  was  successfully  identified  as  a possible treatment for TCE-induced PD. The limitations in this research should be investigated in future studies to further confirm L-Th’s ability to inhibit PD pathogenesis. Specifically, the mechanism in which L-Th acts on TCE-treated cells should be investigated using a multi-tiered approach utilizing molecular docking, enzyme-linked immunosorbent assay (ELISA) assay, and a western blot analysis to identify specific cellular pathways in which L-Th operates and assess cellular protein expression in TCE-treated cells.

The author would like to express his gratitude for the mentorship received from Dr. Wei Zhu during this research.