Salinity causes additional manufacture of reactive oxygen species (ROS) in plants, and ascorbate plays important role in maintaining of ROS scavenging antioxidant enzymes. In this study, the role of exogenous ascorbic acid (AsA) was examined on growth, chlorophyll and oxidative stress related enzymatic and non-enzymatic antioxidants in three maize hybrids under NaCl mediated salt stress. In hydroponic culture, AsA was applied at 0.5 and 1.0 mM with and without 12 dSm-1 NaCl, each treatment comprised two independent experiments with three replications. After four weeks, plants were harvested for recording growth and biochemical parameters. Root length, shoot length, dry matter accumulation, chlorophyll (Chl a and Chl b), AsA, reduced glutathione (GSH) and activity of ascorbate peroxidase (APX) were markedly reduced by salt stress, while H2O2 and Malondialdehyde (MDA) content were increased significantly. Exogenous application of AsA in saline treatment significantly improved root length, shoot length, dry matter accumulation, chlorophyll, AsA, GSH and APX activity while it decreased the contents of oxidized glutathione (GSSG) significantly in all the hybrids. However, content of dehydroascorbate (DHA) was reduced only in 900M Gold and PS-999. On the other hand, activity of monodehydroascorbatereductase (MDHAR) was increased only in Super gold and 900M gold (by 0.5 mM AsA) while dehydroascorbatereductase (DHAR) activity increased in Super gold only. The results of the present study evidently concluded that exogenous AsA application responded differentially in maize genotypes under salt stress and mitigated the negative effects of salinity.

Salt-stress is one of the most prime hindrances in salt affected area of the world for crop production. At present, nearly 6.5% of whole area of the world and around 20% of the cultured land is affected by salinity (Hakim et al., 2014). Salinity changes various physiological and biochemical characteristics which reduce the plant growth and yield production (Munns, 2005). Plant grown at high salt stress in the soil brings about hyperosmolarity, ion disequilibrium, nutrient imbalance and creation of reactive oxygen species () through molecular damage (Nawaz et al., 2010). The excess gathering of ROS at various abiotic stresses in plants which are extremely reactive and noxious and encourage to damage of carbohydrates, proteins, lipids and which ultimately consequences to oxidative stress (Gill and Tuteja, 2010). Hydrogen peroxide (H2O2), produced by salt-stress, is the most stable among all the ROS and reacts with above molecules. Using enzymatic and nonenzymatic antioxidants treatment, these would be managed strategically within a fine influential range (Bose et al., 2013). Moreover, exogenous antioxidant overcomes the low production of growth regulators at stress condition (Ejaz et al., 2012).
The importance and changes in ascorbic acid (AsA) levels in plant cells in response to varying environmental stress conditions are well established (Noctor and Foyer, 1998; Venkatesh and Park, 2014). Functionally, it is an essential metabolite which operates as antioxidant and acts as a significant protagonist of several plant species for salt tolerance (Hameed et al., 2012; Ozgur et al., 2013). Actually, it associates with H2O2 metabolism as well as lipid hydroxyl peroxidase and also reacts with various sorts of biotic actions in plant as a patron or receptor in electron transportation system and also as an enzyme co-factor (Conklin, 2001), this approach effectively minimizes the stress impact of salinity and encourage the plant growth. However, exogenous claim of non-enzymatic antioxidant is an imperious suppository for salt sensitive variety.
Several investigations were performed on different plant or crop that exhibited the application of exogenous AsA significantly mitigated salt stress effect and promoted growth and yield (Ejaz et al., 2012; Abou-Leila et al., 2012; Hameed et al., 2015). Nevertheless, few reports are available on the exogenous role of AsA in mitigating salinity-mediated oxidative damage. Therefore, this investigation was carried out to apprehend the role of exogenous AsA application on maize growth and physiological responses to salt stress.

Plant materials
Three commercial maize hybrids, that is, Super gold, 900M gold and PS-999 were used as experimental materials.
Plant growth condition
The phenotyping was carried out in the green house of Plant Breeding Division, Bangladesh Agricultural Research Institute (BARI), Gazipur-1701 in hydroponic culture, where the temperature was maintained around 28 to 30°C for 14 h, and 22°C for 10 h under light and dark conditions, respectively. The  relative  humidity  and light intensity of the greenhouse room were 50% and 657 μmol m−2s−1, respectively. The study was accompanied with completely randomized design (CRD), specifically, four treatments (Control, 12 dSm-1 NaCl, 12 dSm-1 NaCl +0.5 mM AsA and 12 dSm-1 NaCl +1.0 mM AsA) were set and two independent experiments, each containing three replications, were conducted. Seeds were sown under water saturated quartz granule after surface sterilization (with 0.05% HgCl2 for 10 min) and washed three times with deionized water and covered with black polyethylene for 4 days for germination and kept under light for another 6 days. After the exclusion of endosperm, ten days old seedlings were wrapped with sponge tightly and put in the hole of the cover. Each cover has six holes, where six plants were put into for transplanting in hydroponic pot containing half-strength Hoagland solution. The continuous air was supplied to the nutrient solution for ventilation and the nutrient solution was changed every four days. Salt treatments were applied and changed both normal and treated solution every four days interval. During the changing time of solution, the pot was washed with a brush for minimizing the contamination of fungal growth. Culture duration was almost five weeks in the nutrients solution. After five weeks, the seedlings were taken out for measurement of growth parameters and biochemical analysis.
Growth parameter measurement
Root length and shoot length were measured during harvesting whereas total dry matters were determined after keeping the samples in oven at 60°C for seven days.
Biochemical analysis
Measurement of H2O2
H2O2 was assessed following the method of Yu et al. (2003).
Measurement of lipid peroxidation
The concentrations of lipid peroxidation were estimated by determining MDA, a disintegration product of the peroxided polyunsaturated fatty acid constituent of the membrane lipid with thiobarbituric acid (TBA) as the reactive material succeeding the way of Heath and Packer (1968).
Chlorophyll measurement
Extraction and determination of Chlorophyll (Chl a and Chl b) were done according to the method of Arnon (1949). Chl were computed via following equations and articulated in mg g-1 fresh weight (FW).
Chl a (mg g-1) = (0.0127) × (A663) - (0.00269) × (A645)
Chl b (mg g-1) = (0.0229) × (A645) - (0.00468) × (A663)
Extraction and measurement of ascorbate and glutathione
Ascorbate levels were examined following the process of Huang et al. (2005). The glutathione mere was analyzed using with Yu et al. (2003) methods.
Protein determination
Following to the method of Bradford (1976), the protein levels in the leaf excerpts were measured by BSA as a protein standard.
Enzyme extraction and analyzes
Enzyme extraction was executed affording to the technique as labeled by Hossain et al. (2005). APX (EC: 1.11.1.11) and DHAR (EC: 1.8.5.1) activities were assayed following the technique of Nakano and Asada (1981). MDHAR (EC: 1.6.5.4) activity was computed by the method followed by Hossain et al. (2010).
Statistical analysis
The statistical analysis was completed following complete randomized design (CRD) and the mean differences were compared by Tukey's test using Statistical Tool for Agricultural Research (STAR) Version 2.0.1 for window (IRRI, 2014). Data of mean ± standard error (SE) were recorded from two independent experiments with three replications and P≤0.05 was considered as significant. 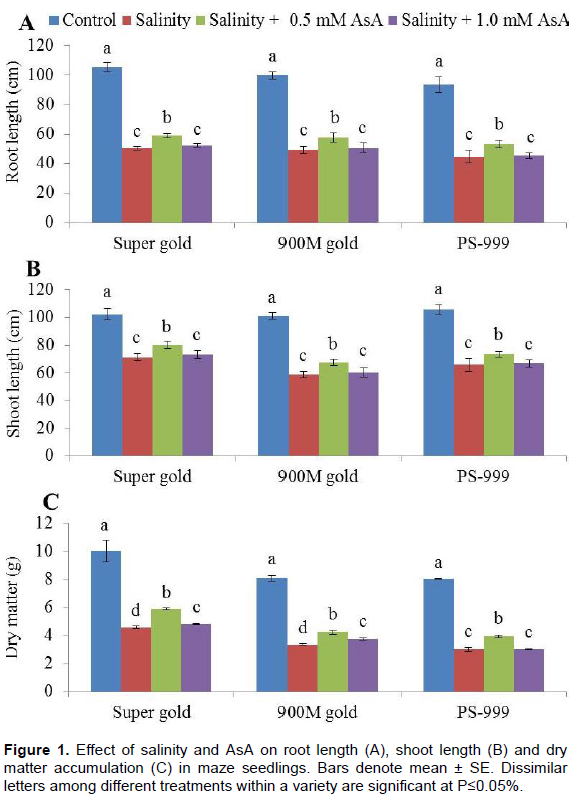 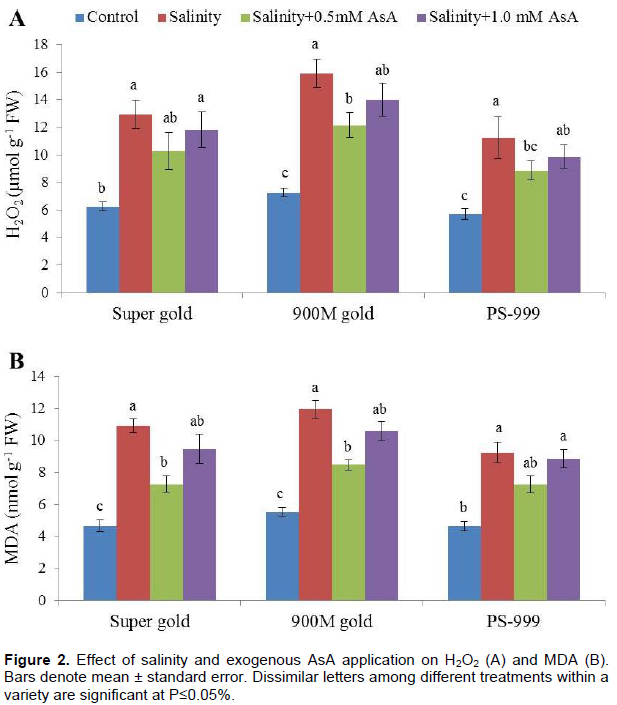 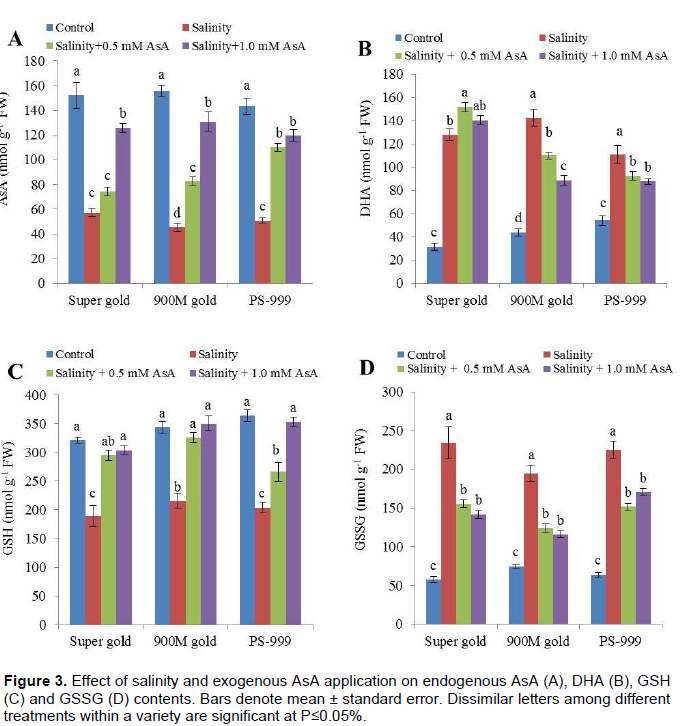 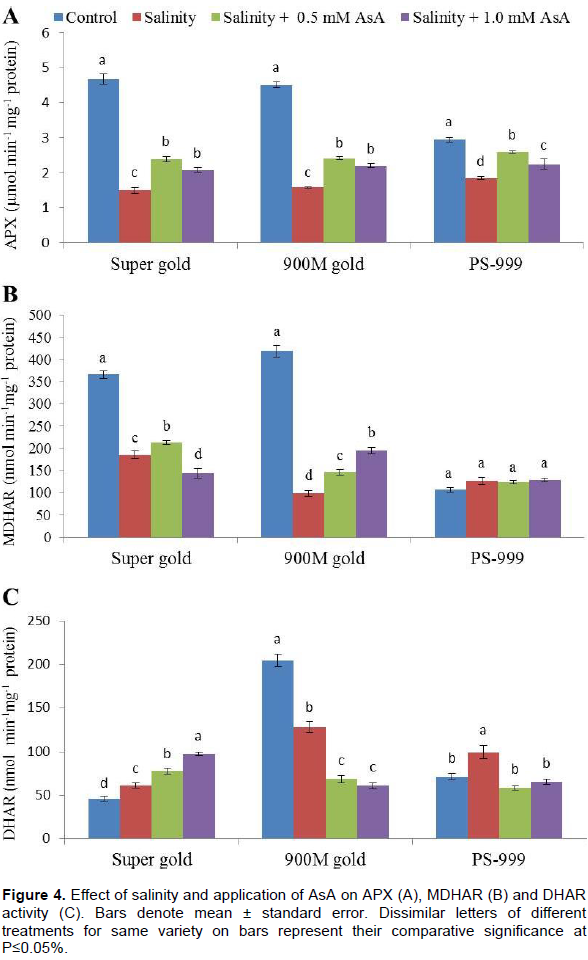 In conclusion, it is clear that application of AsA as non-enzymatic antioxidant alleviated the adverse effect of salinity in maize hybrids and improved all growth and some biochemical attributes by regulating the antioxidative protection mechanisms. Therefore, AsA can performance efficiently in plants as medication when applied at the appropriate concentration during stress environment.