In vitro evaluation of roots, seeds and leaves of Sesamum indicum L. for their potential antibacterial and antioxidant properties

Oxidation is a chemical reaction that transfers electrons from a substance to an oxidizing agent and produces free radicals. These radicals are highly reactive, unstable and by- product compounds of metabolic functions in the

human body. Most free radicals come from the oxygen atoms and are called reactive oxygen species (ROS). These are introduced in the body from both exogenous and endogenous sources such as pollutants, drugs, disease etc. (Kohen and Nyska, 2002). These radicals play deleterious effects in the body resulting in a condition known as oxidative stress. Human bodies are protected from oxidative damage of free radicals through complex defense systems which are known as antioxidants (Aris et al., 2009). Due to the fact that most radicals are short-lived species and react quickly with other molecules, thus the direct detection of ROS is difficult. Secondary products (such as derivatives of amino acids, nucleic acids and lipid peroxidation) are the marker of oxidative damage as it is analyzed by the measurement of these products (Kohen and Nyska, 2002).

In developing countries, bacterial infectious diseases directly affect the large population and these infections have been partially controlled by antibiotic therapies (Alanis, 2005) but Cordell (1995) reported that antibiotics cause hypersensitivity in host. Therefore, there is a need to develop an alternative for the treatment of various infectious diseases that is an antimicrobial drug.

Natural products of higher plants may be a new source of antimicrobial agents possibly with novel mechanism of action (Barbour et al., 2004). Plants possess a variety of beneficial factors that can be used to control human diseases. For example, polyphenols derived from plants have potential health benefits including anticancerous, antimicrobial and antioxidant activities (Yamamoto and Gaynor, 2001; Cushnie and Lamb, 2005).

Sesame (Sesamum indicum L.) is an ancient oil containing kernel that has been commonly used as a source of food and medicines (Hu et al., 2004; Kobayashi et al., 2004; Hsiao et al., 2006). Including sesame, all living organisms are able to develop self defense mechanisms against pathogen attack by producing important compounds such as phenols, secondary compounds and antimicrobial peptides (AMPs) (Pelegrini and Franco, 2005). Sesame belongs to the family Pedaliaceae and found in tropical, subtropical and southern temperate areas of the world, particularly in India, China, South America and Africa. It plays a crucial role in Indian Ayurvedic medicines. The oil of this plant is used as an antibacterial agent and also used to cure Verruca vulgaris (Common Wart) and Verruca plana (clusters of warts, which are usually found on the soles of the foot and around the toes). Das et al. (2012) reported that Sesame peptide (molecular mass less than 1 kDa) involves in inhibition against growth of Pseudomonas aeruginosa as compared to Bacillus subtilis and this is the new discovery to make this crop more important at medicinal level. The present study was undertaken to evaluate the antioxidant and antibacterial activity of different parts of an important oil-yielding crop Sesamum  indicum L.

10 g air-dried powder of leaves, roots and seeds were taken and these samples were dissolved in pre-sterilized distilled water. Extracts were filtered using a Buckner funnel and Whattman No.1 filter paper. Each filtrate was concentrated to dryness under reduced pressure at 40°C using a rotary evaporator.

10 g air-dried powders of leaves, roots and seeds were mixed separately with appropriate quantity of methanol in a conical flask and then kept on a rotary shaker at 25°C for 24 h. Extracts were filtered using a Buckner funnel and Whattman No.1 filter paper. Each filtrate was concentrated to dryness under reduced pressure at 40°C using a rotary evaporator.

The antioxidant activity in different parts was analyzed by using two methods:

The anti-oxidant potentials of the both extracts were determined on the basis of their scavenging activity of the stable 1, 1-diphenyl-2-picryl hydrazyl (DPPH) free radical (Uddin et al., 2008). DPPH method is most widely used and easiest method to determine antioxidant activity. Absorbance at 517 nm was determined after 30 min and percent inhibition was calculated by using the formula:

The TBA test was conducted according to the combined method of Kikuzaki and Nakatani (1993) and Ottolenghi (1959) for determining the antioxidant potential of different parts of S. indicum L. The samples were prepared to 2.0 ml of the sample solution, 1.0 ml of 20% aqueous trichloroacetic acid (TCA) and 2.0 ml of aqueous TBA solution were added. The final sample concentration was 0.02% w/v. The mixture was placed in a boiling water bath for 10 min. After cooling, it was centrifuged at 3000 rpm for 20 min. Absorbance of the supernatant was measured at 532 nm. This TBA method described antioxidant activity by percent inhibition:

The bacterial strains used as inoculums were grown at 37°C to get OD 0.6 at 600 nm and used for susceptibility testing. The antimicrobial assay was performed by two methods viz: agar disc diffusion method and agar well diffusion method (Parekh et al., 2005). The results were obtained by measuring the zone of inhibitions. For each bacterial strain, controls (c) were maintained where pure solvents were used instead of the extract. 20 µl of the test compound with concentration of 25 and 100 µg/ml was introduced into the well and on the disc. The result was obtained by measuring the zone diameter.

Experimental results are expressed as means ± SD. All the same three samples for one treatment were measured three times.

It is clear from the data that there are differences in the antioxidant and antimicrobial effects of different part of the sesame plant using methanol and water extracts. It could be presumed that antioxidant and antimicrobial constituents may not be in sufficient concentration, so as to be effective. Stainer et al. (1986) supported this statement. They revealed during their experimental work on different plant species that it could be possible that the active antimicrobial chemical constituents were not soluble in methanol or water. 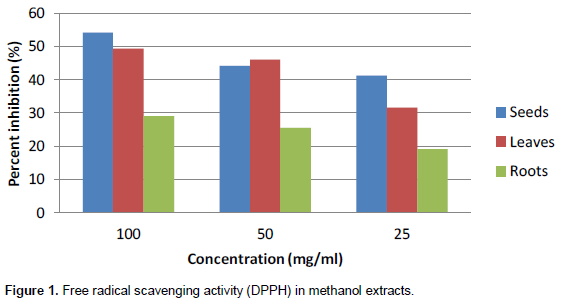 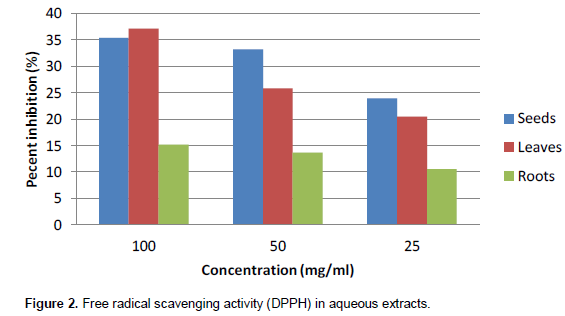 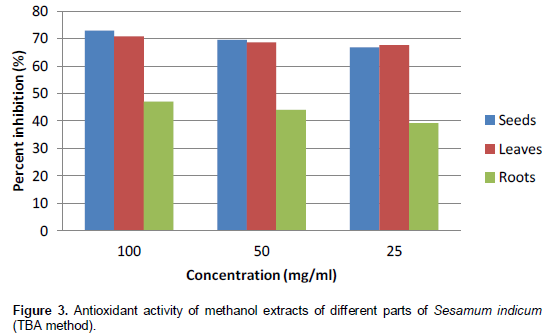 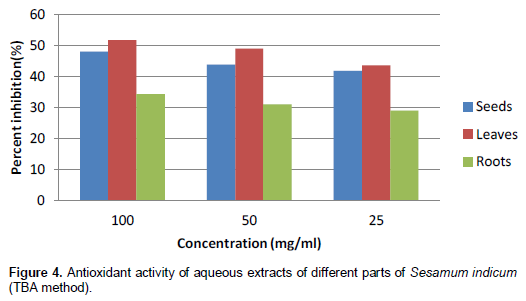 In developing countries, an uncontrolled increase of pathogens with antibiotic resistance including several Gram-negative and Gram-positive bacteria such as E. coli, Psedomonas sp., Staphylococcus sp., Xanthomonas sp. and Bacillus sp. is the cause of serious pathological conditions which have led to search for new strategies to control these infectious agents (Paterson, 2006). All living organisms including sesame are able to develop self-defense mechanisms against pathogen attack by pro-ducing secondary compounds such as polyphenols (Pelegrini and Franco, 2005). These compounds contri-bute to plant innate host defense and represent an important source of antibiotics (Costa et al., 2007).

In this study, in vitro antibacterial activity of extracts of different parts (roots, seeds and leaves) of sesame plant was assayed by agar disc diffusion (Figure 5) and agar well diffusion method (Figure 6) against five bacterial species. Table 2 summarizes the inhibition zone of ampicillin as positive control and Tables 3 and 4 summarizes the microbial growth inhibition of both methanol and aqueous extracts by disc diffusion and agar well diffusion method. 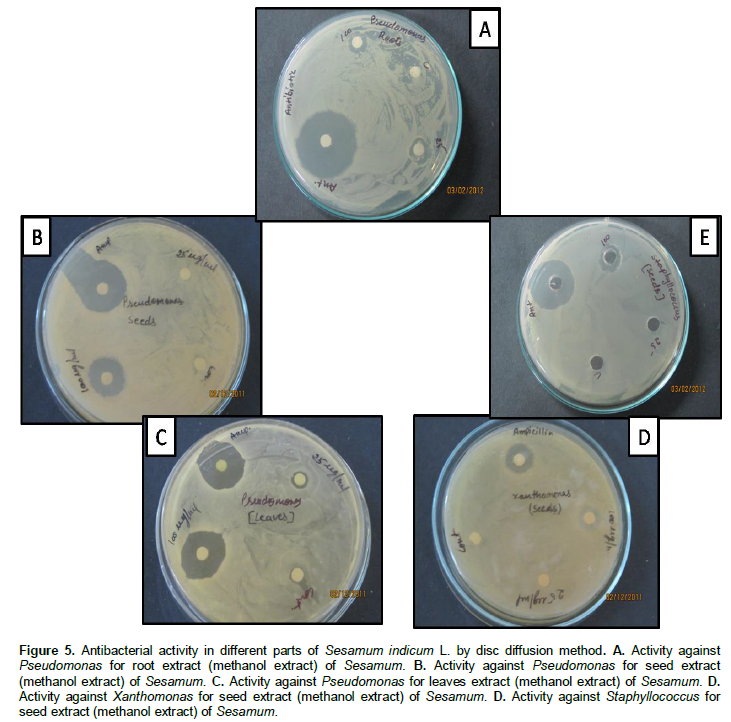 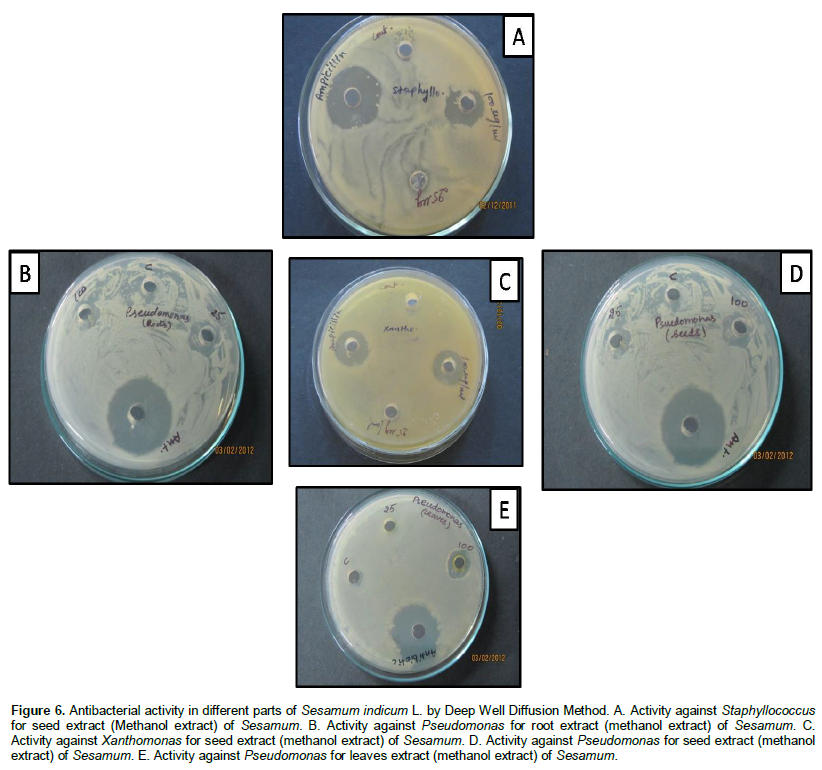 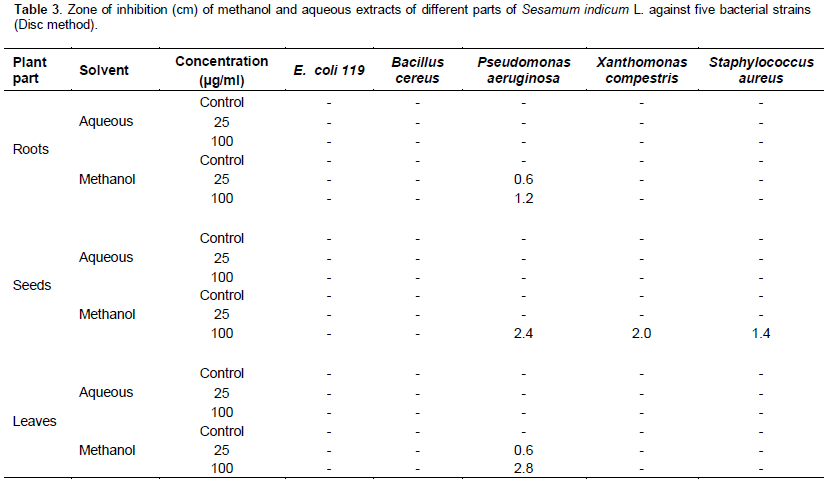 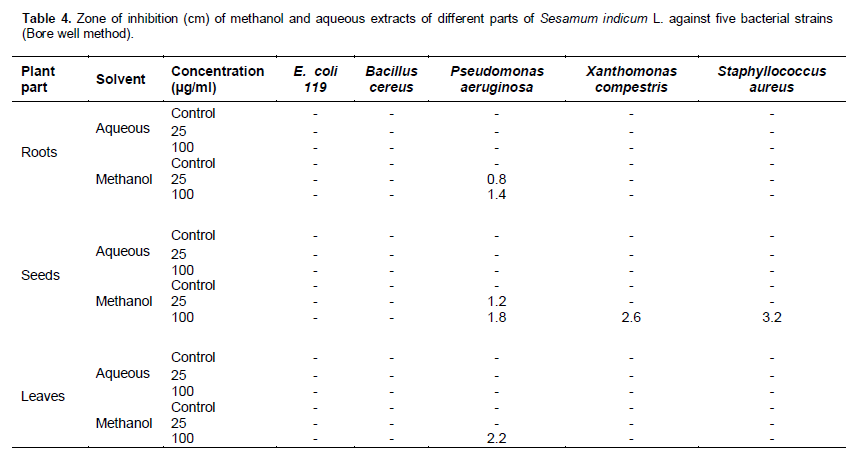 The methanol extracts of different parts of sesame plant have antibacterial effect against few tested micro-organisms except the growth of E. coli and B. cereus. Rios and Recio (2005) reported the significance of the preservation of some of the active ingredients - sesame lignans such as Sesaminol and its glucosides which are water soluble in nature and were extracted effectively during extraction processes of the Sesame leaves. The essential oil from the leaves of S. radiatum  inhibit the growth of E. coli, K. pneumoniae, P. mirabilis, P. aeruginosa, S. marcescens, S. albus and S. aureus (Osibote et al., 2010).

The seed oil has been found to contain natural antibacterial agents that are effective against common skin pathogens such as Staphylococcus and Streptococcus bacteria as well as common skin fungi including the athlete's foot fungus (Annussek, 2001). Costa et al. (2007) showed in their report that antimicrobial peptides from white and black cultivars of sesame were capable of reducing the growth of Proteus sp. and Klebsiella sp. The methanol extract exhibited a mild antimicrobial activity against Staphylococcus aureus (Shittu et al., 2007). This confirms the use of Sesame leaves extracts as antimicrobial agent in folk medicine.

Aqueous extracts had no inhibitory effects on all the five tested microorganisms (Figure 7) but Shittu et al. (2007) explained in their earlier report that the aqueous extract of Sesamum radiatum leaves mildly inhibited the growth of Candida albicans. Aqueous extracts of Curcuma amada showed the inhibitory effect against S. aureus, and Urgenia indica against Klebsiella aeruginosa (Swarnkar and Katewa, 2009). 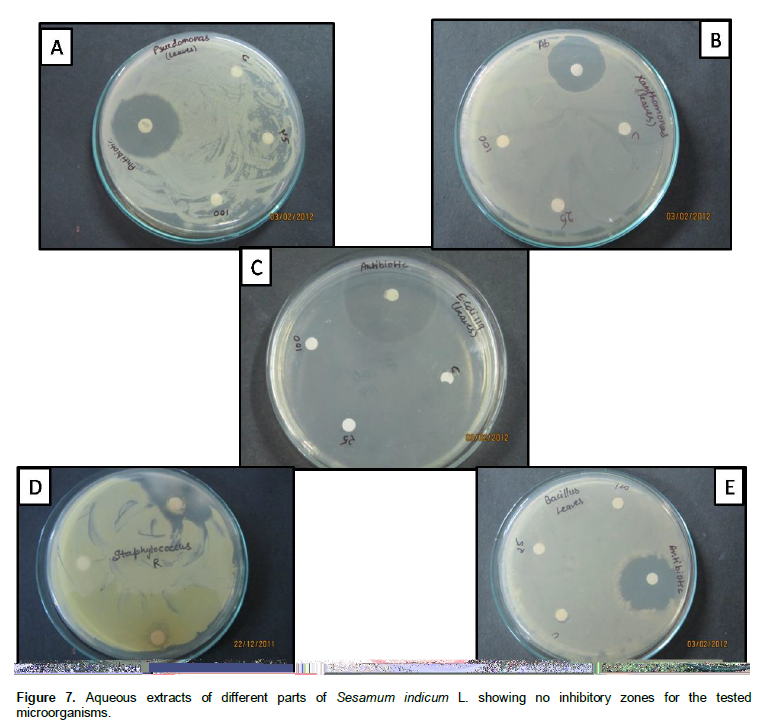 Based on these results, it is possible to conclude that methanol extracts of different parts of S. indicum L. had different level of antioxidant and antimicrobial activity. The obtained results might be considered sufficient for further studies for the isolation and identification of the active principles and to evaluate the possible synergism among extract components for their antioxidant and antimicrobial activity. These results open the possibility of finding new clinically effective antioxidative and antibac-terial compounds. Our study emphasizes the accuracy of traditional remedies and also illustrates the strong dependence of certain people on traditional medicine and the creativeness in which plants and their secondary metabolites can be utilized.