The objective of this study was to determine the frequency of haptoglobin (Hp) genotypes and their association with nephropathy and retinopathy in diabetic subjects. This is a case-control study conducted in diabetic subjects developing nephropathy and/or retinopathy. Each patient was matched to a control of the same sex and the same age ± 2 years. Hp genotyping was performed by conventional PCR without enzymatic digestion on the Proflex® System PCR (Biosystems, Spain) and the biochemical parameters were determined using enzymatic techniques with the Cobas c311 system (Roche Diagnostics, Switzerland). The study population consisted of 60 diabetic subjects with an average age of 56 years and a sex ratio of 0.43. The Hp2-2 genotype was more frequent in diabetic subjects (40%) compared to control subjects (28.3%) (p= 0.18). The distribution of Hp1-1 and Hp2-1 genotypes in diabetic subjects showed rates of 46.7 and 13.3% respectively.  Multivariate analysis showed that the Hp 2-2 genotype was more associated with nephropathy (OR=1.77; p=0.8). These results showed an association between Hp polymorphism and diabetic microangiopathy. Thus, Hp2-2 genotype could be associated with a risk factor predisposing to the onset of diabetic kidney disease.

Diabetes is not only a major public health problem because of its progression, but also because of the significant medical, social and human costs it generates. This progression is such that it is considered by the World Health Organization (WHO) to be a rampant epidemic (Beaudeux and Durand, 2011). About 425 million people, or 8.8% of adults, are living with diabetes worldwide in 2017, 79% of whom live in low- and middle-income countries. According to the International Diabetes Federation (IDF), by 2045, 693 million people will have diabetes (Diabetes Atlas, 2017).
Diabetes is all the more serious in that it causes many debilitating complications, particularly affecting the cardiovascular system but also other organs such as the eyes, the kidneys and the nervous system. The onset of complications is associated with several factors which may be environmental in nature, but the role played by genetic factors is increasingly being recognized. Epidemiological studies looking for candidate genes have indicated differences in genetic susceptibility to the development of vascular complications in diabetic patients of different haptoglobin (Hp) genotypes (Szafranek et al., 2002; Nakhoul et al., 2001). The influence of genetic polymorphism of Hp on the evolution of diabetic disease has been reported by several authors. Indeed, Hp is a plasma protein synthesized by the liver and coded by two alleles rated 1 and 2 that give rise to three large genotypes Hp 1-1, Hp 2-1 and Hp 2-2; it has an antioxidant power that is genotype dependent (Brown, et al., 2013; Szafranek et al., 2002; Dalan et al., 2016). Considerable evidence has been reported regarding the involvement of oxidative stress in the development of vascular complications of diabetes (Giugliano et al., 1996; Gurler et al., 2000). The protein product of the Hp 2 allele is a lower antioxidant compared to the Hp 1 allele (Dalan et al., 2016). The genotype Hp 1-1 would protect better against oxidative stress compared to the genotype Hp 2-2 which has low antioxidant activity; the genotype Hp 2-1 has intermediate activity (Brown et al., 2013). However, in our regions, little data exists on the role played by genetic factors in the onset of diabetes complications. Thus, the objective of this study was to determine the frequency of Hp genotypes in order to search for a possible association with nephropathy and retinopathy in diabetic subjects.

Place and design of study
This is a case-control analytical study carried out at the Biochemistry Laboratory of the Fann National University Hospital (FNUH) between June 2018 and September 2019.
Study population
The patients were recruited from the MARC SANKALE Center of AbassNdao Hospital in Dakar (Senegal) specializing in the national management of diabetes. Diabetic patients developing nephropathy with microalbuminuria ≥ 30 mg / 24 h and / or diabetic retinopathy were included in our study. The controls were recruited at the Biochemistry Laboratory of the Fann National University Hospital (FNUH) and at the National Blood Transfusion Center (NBTC) among blood donors. For each patient, a control of the same sex and the same age ± 2 years was recruited. Pregnant women and non-consenting patients were not included.
Sampling
Blood samples were taken from subjects fasting, at rest and by venipuncture at the elbow crease with tourniquet using a tube with EDTA for haptoglobin genotyping.
Genotyping of the haptoglobin gene
The DNA was extracted from whole blood using the QIAmp® genomic DNA and RNA kits (QIAGEN, Paris) using the semi-automatic microcentrifuge technique following the instruction of manufacturer.
The different genotypes were obtained using conventional PCR without enzymatic digestion with the Proflex System PCR (Biosystems, Spain). Primers A (5'GAGGGGAGCTTGCCTTTCCATTG3 ') and B (5'GAGATTTTTGAGCCCTGGCTGGT3') were used for the amplification of a sequence of 1757pb specific for the Hp1 allele and of a sequence of 3481pb specific for the Hp2 allele respectively. Primers C (5’CCTGCCTCGTATTAACTGCACCAT3’) and D (5’CCGAGTGCTCCACATAGCCATGT3’) were used to amplify a 349 bp sequence specific for the Hp2 allele (Koch et al., 2002). The reaction medium consisted of 1 μl of each of the 4 primers mentioned above, 12.5 μl of a synthetic Taq polymerase, 6.5 μl of sterile water and the whole added with 2 μl of DNA extract. The PCR was then performed following a programming of 35 amplification cycles (denaturation at 95°C for 1 min; hybridization at 69°C for 2 min and elongation at 72°C for 7 min for each cycle) preceded by initial denaturation at 95°C for 5 min. The electrophoretic migration of the PCR product was performed with Mupid-One (Labpro Scientific Laval, Canada) on 0.7% agarose gel supplemented with ethidium bromide (BET) and in the presence of a molecular weight marker. The DNA bands were then visualized by reading with the Doc Rx Gel.
Statistical analysis
The data was processed and analyzed with Epi info 7.2.2.6 software. The Student’s t-test was used to compare the averages and the comparison of the proportions was carried out with the Chi² test. The odds ratio has been used to measure associations between Hp genotypes and diabetic microangiopathy. A p-value less than 0.05 was considered statistically significant.

The study population consisted of 60 diabetic subjects whose average age was 56 years. A female predominance was found with a sex ratio of 0.43. The average BMI value was 26.06 and that of the diabetes duration was 8.1 years. Among the microangiopathic complications sought, diabetic nephropathy was more common with a frequency of 88.33% followed by retinopathy with a rate of 11.67% (Table 1).
Statistical analysis of the data also showed higher average blood sugar level in diabetic patients (1.71g/L) than in controls (0.95 g/L) (p = <0.0001). The same variations were observed for HbA1c with a rate of 8.43% in the patients versus 5.48% in the controls (p = <0.0001).
The DNA amplification using the four primers A, B, C and D generated different PCR products: one Hp1-specific product of 1757 bp and two Hp2-specific products of 349 and 450 bp. The Hp2-specific product of 3481 bp was not generated (Figure 1). 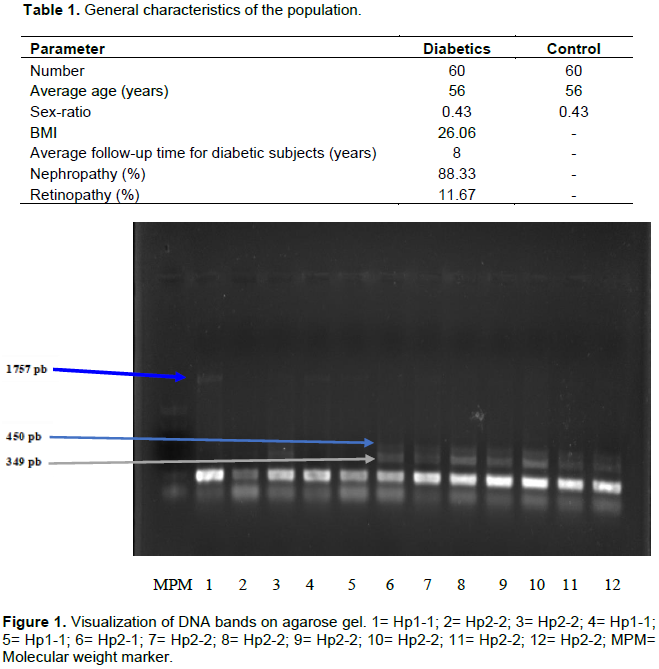 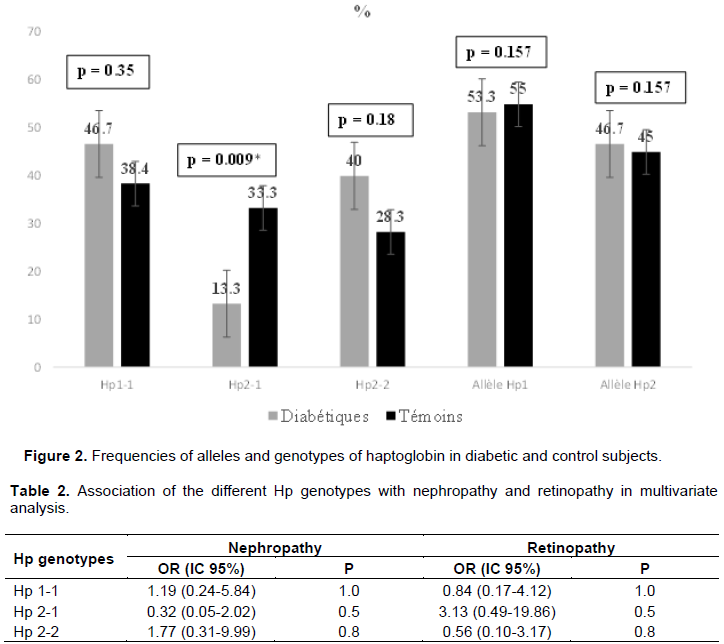 Diabetes is a chronic metabolic disease associated over time with macroangiopathic complications but also very often with diabetic microangiopathy. The occurrence of the latter is today linked to the expression of certain genes but also to  a genetic polymorphism. Thus, the objective of the study was to search for genetic biomarkers predisposing to the occurrence of vascular complications in diabetes.
The population was characterized by an average age of 56 years and a sex ratio of 0.43. A similar trend was also found in the studies of Ndour-Mbaye et al. (2011) in Senegal (75.1% women) and Djrolo et al. (2012) in Benin (62.1% women) thus confirming our results. However, in the literature studies have also reported a male predominance (Drabo et al., 1996; Millogo et al., 2015).
The evaluation of data related to the type of microvascular complications showed a high prevalence of nephropathy with a frequency of 88.33% compared to retinopathy (11.67%). This result is supported by several studies including that of Demnati et al. (2010) in Tunisia. In this study, the frequency of retinopathy is probably underestimated due to the limited accessibility to diagnosis and the high cost of these investigations, which are mostly borne by the patient.
The study of the genetic polymorphism of Hp showed in the controls a higher frequency of the Hp1-1 genotype in controls with a rate of 38.4%. Similar results were found by Harris et al. (1959) who found in a study carried out in The Gambia a predominance of the Hp1-1 genotype with a rate of 30.57% followed by the Hp2-1 (21.66%) and Hp2-2 genotypes (7.01%). However, a predominance of the Hp2-2 genotype with a frequency of 48.2% was found by Koch et al. (2002) in a study carried out in Germany. There is indeed certain variability in frequencies across the world. Authors have shown a predominance of the Hp1-1 genotype in black populations; while in Caucasian populations the predominant form is Hp2-1 followed by Hp2-2 (Moullec et al., 1961).
Genotyping performed in diabetic subjects showed a higher frequency of the Hp2-2 genotype (40%) compared to controls (28.3%) (p = 0.18). These results are similar to those of Brown et al. (2013) who found a majority frequency around 38% for the Hp2-2 genotype in a Ghanaian study of 50 diabetic black patients. In addition, this increase in the frequency of the Hp2-2 genotype has been found in the literature in diabetes but also in the context of other pathologies such as cardiovascular diseases (Guèye, 2007; Holme et al., 2009).
In multivariate analysis, the Hp2-2 genotype increases by 1.77, the risk of developing nephropathy (OR = 1.77) although this link is not statistically significant (p = 0.8). Retinopathy is more associated with the Hp2-1 genotype (OR = 3.13 and p = 0.5). This result could be explained by the fact that retinopathy was very infrequent (11.67%) in the study population. In the literature, the Hp2-2 genotype is found to be more associated with the occurrence of diabetic microangiopathy (Nakhoul et al., 2001; Levy et al., 2000; Nakhoul et al., 2000). Indeed, HP is considered an antioxidant because of its ability to recover free Hb from extra and intravascular hemolysis and prevent the initiation of reactions leading to the production of free radicals. However, this antioxidant activity varies greatly among different Hp genotypes (Melamed-Frank et al., 2001). Some authors have shown that the protein Hp1-1 eliminates Hb faster than the Hp2-2 protein. Consequently, there are more Hp-Hb molecules in the plasma of individuals with the Hp2-2 genotype. This mechanism would be of even greater importance in diabetics, already exposed to significant oxidative stress (Szafranek et al., 2002; Dahan et al., 2015). However, this study presents certain limitations relating to very narrow selection criteria and to the limited sample size of cases, especially for those developing retinopathy. In addition, we did not take into account certain confounding factors that could influence the development of microangiopathy, such as smoking.

Written and informed consent was obtained from each participant.

This study was approved by the Research Ethics Committee (CER) of the Cheikh Anta Diop University (UCAD) in accordance with the rules issued by the National Ethics Committee for Health Research (CNERS) of Senegal under number: 0227/2017/CER/UCAD.