The determining factors of broadband use in Africa: inhibitors and enablers of the use of mobile broadband

This study extends Technology Acceptance Model (TAM) to study inhibitors and enablers of the use of mobile broadband in Africa. The conceptual model tested incorporates two key constructs into TAM: Perceived price and energy —are also analyzed. Results from online survey, of 114 mobile internet consumers supported the model. The study identified the factors that can influence their decision-making and the various obstacles they face in the use of mobile-broadband. The theoretical and managerial implications of these results are discussed.

According to the International Telecommunication Union (ITU), there were more than seven billion four mobile subscribers globally in 2016. This figure is expected to reach one billion additional mobile subscribers in 2020 which 90% of them will come from developing markets. The resounding success of mobile telephony could be explained on one hand, due to the advance-ment in technology coupled with economic changes and on the other, the liberalization of the telecommunications sector and the growing need to connect to the Internet.
Presently, the rate of penetration is 94.1% for the developing countries. However, by the end of 2017 this penetration rate would have reached 100% and for the developed countries, it would reach more than 127%. Thus, by the end of 2014, the penetration rate of mobile 9broadband will reach 32%; in developed countries, it will be 84%, four times what it is in developing countries (21%).
Moreover, with the growing need to connect to the Internet, the mobile phone will become the primary means for connectivity (Cheneau-Loquay, 2010) and would represent 80% of all connections in 2015. While the upheaval in the world of telecommunications and the use of the internet started some fifteen years ago throughout Africa (Cheneau-Loquay, 2011), it has been found out that there is a rapid increase in the use of the internet via the mobile phone.
According to the Agency Ecofin, the growth of mobile internet services in Africa is at an exponential rate. More than 500 million people, today, have access to broadband (3G and 4G). This figure estimated by ITU,will increase, according to the same source, to 3.4 billion by 2016.
In sub-Saharan Africa, broadband technology was launched in 2004 and there are now 21% Active mobile-broadband subscriptions. This is due to the increased speed for the exit traffic internationally, following the interconnection to the submarine cable.
Given the huge potential of the mobile-broadband on the sub-Saharan Africa market despite the low coverage of the 3G and 4G networks, socio-economic difficulties, the repetitive power failures, and faced with the absence of studies in this area, in Africa and particularly in sub-Saharan Africa this paper could be a contribution to stimulate the growth in mobile-broadband in sub-Saharan Africa, and act as a bench-mark for other researchers and enable practitioners to build their strategies for deployment of broadband in these countries.What are the factors affecting or influencing the use of mobile-broadband services in the sub-Saharan Africa?
To answer this question, we must recall at first the background literatures justifying consumer behavior and theories relating to the appropriation of information technology and communication (ICT). This literature review will lead to the study research model that will be tested with a hypothetical-deductive approach. In a second step, we will present the methodology used for this research, which takes into account the context of the research, sampling, and measurement instrument for the implementation of the constructs. Finally, we will present the results which will then be discussed before conclusion.

Overview of the evolution of mobile-broadband (3G, 4G)
According to Chong et al. (2010), 3G is known as mobile communications of third generation. The 3G technology is defined as "the new generation of telephone communication system allowing the fusion of terrestrial and satellite components. It supports up to 2 Mbps transmission speed ".
Globally speaking, 3G is a technology that has reached its maturity as it is deployed in virtually every country in the world. As a technology, 4G continues to develop. Operators are already making considerable amount of progress in increasing the data speeds of their existing networks by adopting 4G, which can theoretical achieve downlink speeds of up to 300 Mbps.
The development of smartphones "low Cost that is, with a value of less than USD 50, as Orange Kliff or Elikia (first African smartphone VMK created by the Congolese manufacturer) boosted the use of mobile broadband in countries where 3G / 4G networks are installed (Table 1).

Factors of adoption of mobile-broadband
Three main models are the basis of most studies on the diffusion and adoption of innovations: the Bass model (1969), the Rogers model (1962, 1971, 1986, 2003) and TAM model (Davis, 1989).
This study will focus on the Technology Acceptance Model (TAM) based on the adaptation of the Theory of Reasoned Action (TRA) (Fishbein and Ajzen, 1975). Introduced by Davis (1986), TAM is used to model the user acceptance of information systems. Its aim is to provide an explanation of the determinants of acceptance and use of technologies.
The literature shows that the TAM was made to trace the impact of external factors on the beliefs, attitudes and intentions by identifying a limited number of variables suggested by previous researches. The TAM is based on two beliefs, in particular, "perceived usefulness" and “perceived ease of use” to explain the attitude of the user; its intentions and behavior adoption of a technology based on computer. In a precise way, Davis defined perceived usefulness as "the degree to which a person believes that using a particular system enhances work performance. "As for the perceived ease of use, Davis shows that it is" the degree to which a person believes that using a system requires no effort".
TAM may explain the success or failure in the adoption of new technologies (Straub et al., 1997). According to Taylor and Todd (1995), the TAM can predict the determinants of acceptance of a system and guide changes required before users can develop experience in the use of the system studied (Figure 1). Like with any human representation, perception is more or less part of subjectivity. In fact, in his model, Davis (1989) connects the perceived usefulness and perceived ease of use with the attitudes of usage which in turn produces the actual usage of technologies.

Thus, the TAM's objective is to explain and predict based on a diagnostic, the eventual inhibitors of usage that can possibly influence the behavior of the user based on his initial experience with the technology (Deng et al., 2005).
Research model and hypotheses development
The study research model will rely especially on the TAM (Davis, 1986). The choice of this model focuses on the possibility and the ability to contain the more constructs as possible that preoccupy us in order to explain the individual decision of use of mobile-broadband in the Sub- Saharan Africa.
The TAM uses two determinants of attitude toward use: perceived usefulness and perceived ease of use. Figure2 presents our conceptual model that derives from the TAM which adapts to the realities of the Sub-Saharan Africa. We included into the TAM other variables such as cost and energy. The constructs of the conceptual model as well as the assumptions of the research will be explained in the remainder of this section. 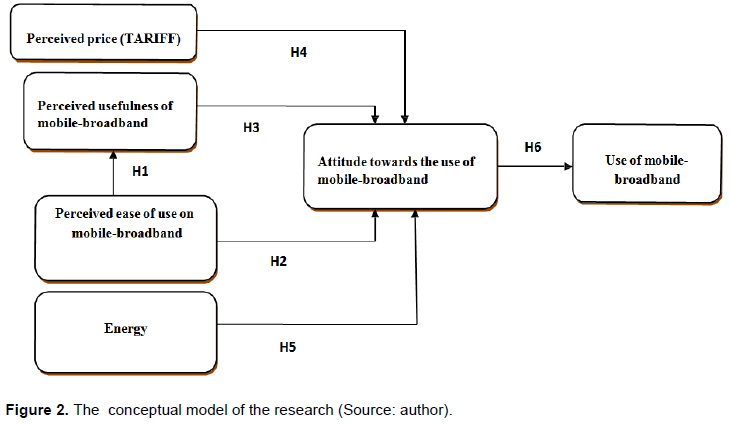 Using a convenience sample may be allowed (Calder et al.,1981, 1982) for exploratory studies such as the one of this study. Convenience samples and purposive samples were used. The data were obtained using a questionnaire administered online among a sample of 114 mobile broadband users living in the Sub-Saharan Africa distributed as follows; Western (25%), Central (25%), Eastern (25%) and Southern African (25%) countries.
Sample size
The formula below calculates the sample size:
N = t² x p * (1-p)
m²
N = required sampling size
T = confidence level at 1.96 for a confidence level of 95%
P = estimated proportion of the population with the characteristic studied
M = margin of error at 5% (standard value of 0.005)
Our p proportion is 93% because we admit that the population has a 3G mobile phone.
N = (1.96) 2x 0.93 * (1-0.93)
0.05²
N = 100 people.
All the time, since the survey was administered online, we had 114 individuals, 14 more respondents than expected.

Data analysis and results of the study
Data analysis was carried out in several stages. After a statistical analysis of sample data (Appendix 1), we checked the reliability and convergent validity of the variables and validate the conceptual model and hypotheses of the study. Data analysis was performed using statistical package for social sciences (SPSS) 20.0 software for descriptive statistics and supplemented by SmartPLS M3 2.0 software for the validation of the measurement instrument and hypothesis testing.

Description of the sample
The sample consists of 31.6% women and 68.4% men from west, central, east and south African countries. The age of respondents ranged from under 25 to over 45 years. The class of young people between 15 and 25 years is shown on the threshold of 29.8%. Those with 26-35 years represent 52.6%. Moreover, the class of employees is represented on the threshold of 49.1%, while that of the students 30.7%. We also note that 86.8% of respondents have a mobile-broadband and live in Sub-Saharan Africa. Indeed, the composition of the study convenience sample in terms of gender, age and socio-professional category are presented in Table 2. Gender, age and socio-professional category are variables that are analyzed using SPSS software. Latent variables are measured on a Likert scale of five items ranging from 1 (disagree) to 5 (strongly agree). 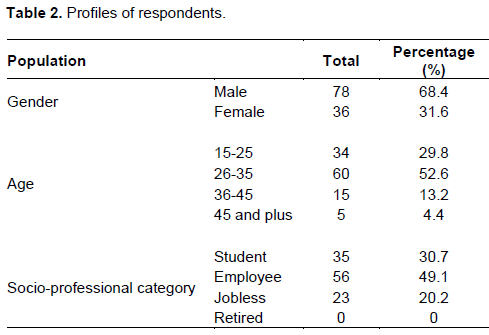 The results of the measurement models of the reliability and validity analysis
The results from the analysis are presented in Tables 3, 4 and 5. The reliability of Items shall be considered by the value of Cronbach's alpha, all above 0.7 (Nunnally, 1978). Convergent validity was analyzed by two criteria: the AVE greater than 0.5 (Bagozzi, 1998) for all dimensions and T-value greater than 1.96 (Table 3). 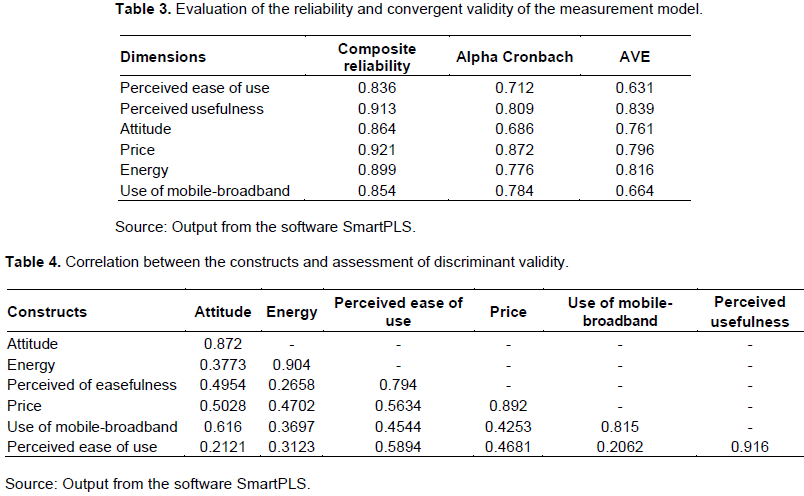 All items have good reliability, the Cronbach's alpha coefficients ranging from 0.7 to 0.9. The results from Table 3 confirm a good convergent validity since not only the AVE is greater than 0.5 for all dimensions but also the T-value is greater than 1.96 for all items. Convergent validity is checked (Table 4).
The results in Table 4 show a correlation for each of the variables in the model. Correlations must be less than or equal to the values of square roots of AVE worn diagonally (Gefen et al., 2000). Indeed, the discriminant validity well within the threshold selected by the authors: square root of the AVE is greater than the correlations between variables.
The results from the smartPLS allow us to conclude that the criteria for validation of the measurement model are checked. For the composite reliability coefficients to assess the internal consistency of the scales are all above 0.80. Convergent validity and discriminant honor the thresholds used by researchers (AVE> 0.5).
In essence, the analysis of the psychometric properties (reliability, convergent validity, discriminant validity) shows that we have in this study measures acceptable to proceed to test the structural model.
Evaluation of the structural model
The evaluation of the structural model is based on the predictive relevance of latent variables (Wold, 1975; Jöreskog and Wold, 1982; Wold, 1985), that is to say their nomological validity. We will analyze the coefficient of determination R2, the coefficient Q2 of Stone Geisserand the adjustment index GOF (Goodness-of-fit).
According to Fernandes (2012) "if Q2 is positive, then the model has predictive validity. If it is negative, the constant lack of predictive validity. "Croutshe (2009) also states that the coefficient Q2 is acceptable if it is greater than 0. The level of adjustment index GoF boils is presented in Table 5.
Table 6 shows the validity of the structural model. It shows the values of coefficients of determination (R2) and the AVE for each variable in the model. The mean value of R2 (0.38) is greater than 0.1. The results therefore indicate a good model fit. Similarly, the average value AVE is positive. The model has indeed predictive validity. GoF index is calculated based on the geometric mean of the average R2 and AVE: 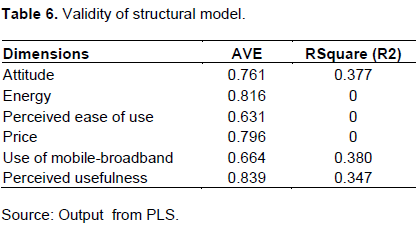 GoF = √ (0.751) x (0.368) = 0.53. This index is very satisfactory and confirms the quality of our model. Figure 3 shows the structural model derived from SmartPLS (Figure 3). Following the results from the SmartPLS software, we can conclude that the validation criteria of the measurement model are checked. 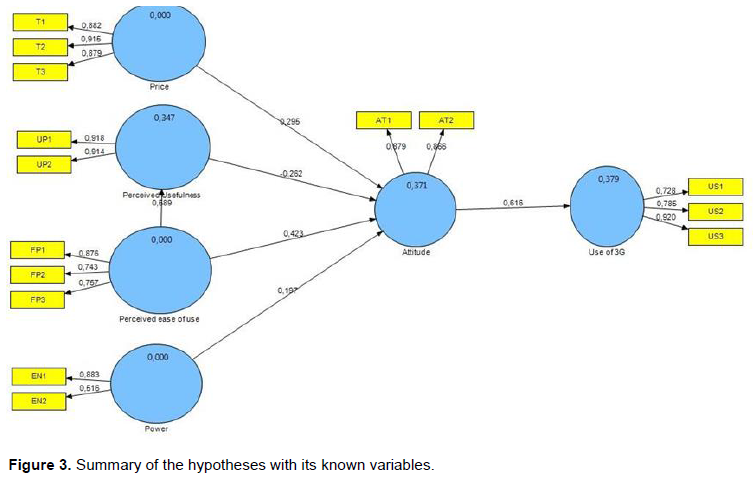 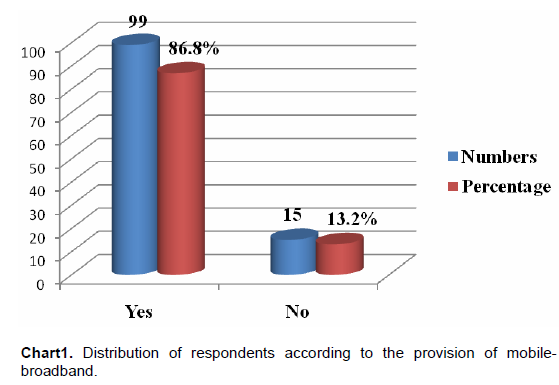 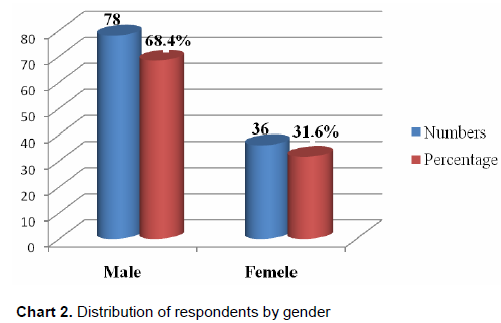