Yeasts are very important in food production by affecting the quality and safety of different food products. Yeasts are commonly used in the production of beer, wine and bread; but many yeast species have been isolated from different African fermented foods. The present study aims to determine the biodiversity of yeasts isolated from selected Nigerian fermented foods. A combination of phenotypic and molecular tests were employed in the identification of yeasts. A total of 145 yeasts were isolated from six different food products. The yeasts belong to six genera namely Saccharomyces, Candida, Cyberlindnera, Meyerozyma, Trichosporon and Galactomyces. The most frequently encounter was Saccharomyces cerevisiae followed by Candida glabrata. The present study has confirmed the biodiversity of yeasts isolated from fermented food of Nigerian origin.

In different parts of the world, humans consumed many types of fermented food products. Traditional knowledge is used in the processing of available plant and animal materials to produce fermented food (Achi, 2005). Fermentation is the chemical modification of foods by enzymes of living microorganisms.  During the production of fermented foods, microorganisms that are present in the raw materials or added as starter culture change the raw materials both biochemically and organoleptically into edible products that are culturally acceptable to the maker and consumer.
In Nigeria different types of nutrient rich crops are processed by fermentation into foods or used as condiments (Iwuoha and Eke, 1996). Most of these food crops are not consumed without fermentation because of the presence of certain toxic components or antinutritional factors. When foods are fermented a general improvement takes place in the shelf life, texture, taste, aroma as well as nutritional value. The fermentation process is usually performed at the household level or at a small scale. The different types of traditional fermented food products in Nigeria include fufu, gari, ogi  and  nono.
Fufu and gari are fermented cassava product while ogi is produced from different types of cereals such as maize, sorghum and millet (Omemu et al., 2007). Nono is a fermented milk product. The traditional fermented alcoholic beverages include the palm wine, burukutu and agadagidi. Palm wine is produced from the sugary sap of the African oil palm (Elaeis guineensis) and the raphia palm (Raphia hookeri) (Sanni and Lonner, 1993).
Burukutu is an alcoholic beverage produced from red sorghum (Sorghum bicolor) while agadagidi is produced from ripe plantain pulp (Sanni and Lonner, 1993). The production of these food products is by spontaneous fermentation and therefore different types of microbes are usually found. The microorganisms commonly found in Nigerian traditional fermented foods and alcoholic beverages are yeasts and lactic acid bacteria. However, yeasts are responsible for the alcoholic content of the beverages.
The fermentation of carbon sources by yeasts for production of alcoholic beverages is the oldest and most economically important of all biotechnologies. In order to maximise alcoholic yield and maintain sensory quality, it is necessary to select suitable yeast strains for alcoholic fermentation. The occurrences of yeasts in significant number ranging from 105 to 108 cfu/g in many traditional African fermented foods have been reported (Greppi et al., 2013). Most of the previous studies on identification of yeasts from Nigerian traditional fermented food products used cultural, physiological and biochemical tests for yeast strains identification (Sanni and Lonner, 1993; Omemu et al., 2007; Chilika et al., 2010; Umeh and Okafor, 2016 and Olowonibi, 2017). These methods of identification are laborious and most importantly often fails to identify strains correctly to the species level. DNA sequence based methods provide a rapid and accurate means of microbial identification and permit a certain level of phylogenetic classification of the species into genera or even families (El-Sharoud et al., 2009). The main objective of the current study is to identify yeasts isolated from some Nigerian traditional fermented food products.

Sample collection
Ten samples each of traditional fermented food products like retted cassava (fufu) (FF), ogi-baba (OBB), burukutu (BKT), agadagidi (AGG) and palm wine (PAW) were collected from Ibadan Metropolis immediately after production in sterile containers and transported to the laboratory for immediate use in the isolation of yeasts. Agadagidi was prepared in the laboratory by simulating the traditional method.
Isolation of yeasts
The different food samples were used in the preparation of ten-fold serial dilutions using sterile distilled water. Then 0.1ml of the serial dilutions was spread on potato dextrose agar (PDA) that  has  been supplemented with 100 mg/ml of chloramphenicol to inhibit the growth of bacteria. The yeast cultures obtained were then purified by repeated streak-inoculation on PDA. The pure cultures obtained were stored under refrigeration until needed for further studies (Kurtzman et al., 2011).
Identification of yeast isolates
Microscopic examination of yeast isolates
The pure cultures of the yeasts were streaked onto thin sterile agar and the cells were examined with a Leitz Ortholux phase-contrast microscope (Leica Microsystems, Wetzlar, Germany) and the images were recorded electronically with a Sony XC-75CCD camera.
Phenotypic identification of yeast isolates
Physiological and biochemical tests were performed by fermentation and assimilation tests. Different carbon compounds such as hexoses, pentoses, polysaccharides, alcohols and organic acids were used. The nitrogen compounds include sodium nitrate, sodium nitrite, ethylamine, lysine and cadaverine (Kurtzman et al., 2011).The carbon compounds used in the study include glucose,sucrose,raffinose,melibiose,galactose,lactose,trehalose,maltose,melezitose,salicin,sorbose, rhamnose,xylose, L-arabinose, D-arabinose and ribose.The alcohol used in this test includes methanol, ethanol, 2-propanol, 1-butanol, glycerol, erythritol, ribitol, xylitol, galacitol, mannitol, glucitol and inositol. The yeasts were grouped together based on their phenotypic properties and representatives were selected for DNA sequencing.
Molecular identification.
DNA sequence analysis
Whole cells grown on YM agar (1.0% glucose, 0.5% peptone, 0.3% malt extract, 0.3% yeast extract, 2.0% agar) for 1 to 3 days were suspended to a density of 1+ in water (Lachance et al., 1999). Ten microlitres of the suspension was incorporated into 20 µL amplification reactions.  The D1 and D2 domains of the large subunit ribosomal RNA were amplified using primers NL1 (52-GCATATCAATAAGCGGAGGAAAAG) and NL4 (52-GGTCCGTGTTTCAAGACGG) (Kurtzman and Robnett, 1998). Amplification by the polymerase chain reaction was conducted following the instructions provided by the supplier of heat-activated Taq polymerase (in vitrogen), in the presence of 1.5mM MgCl2 in an M.J Research PTS 200 cycler. The mixture was held for 2 min at 95°C and then subjected to 35 cycles at 94°C for 15 s, annealing temperature for 15 s, and 72°C for 40 s, with final extension for 5 min at 72°C. The annealing temperature varied from 55.7 to 53.7°C during the first 20 cycles and kept constant for the remainder. The amplified DNAs were concentrated and cleaned on Qiagen spin columns, and sequenced with ABI sequencer (Applied Biosystems) at the John P Robarts Research Institute, London, Ontario, Canada. The sequences were edited and aligned with the program Mega, version 5.0 and compared with published sequences (Kurtzman and Robnett, 1998). 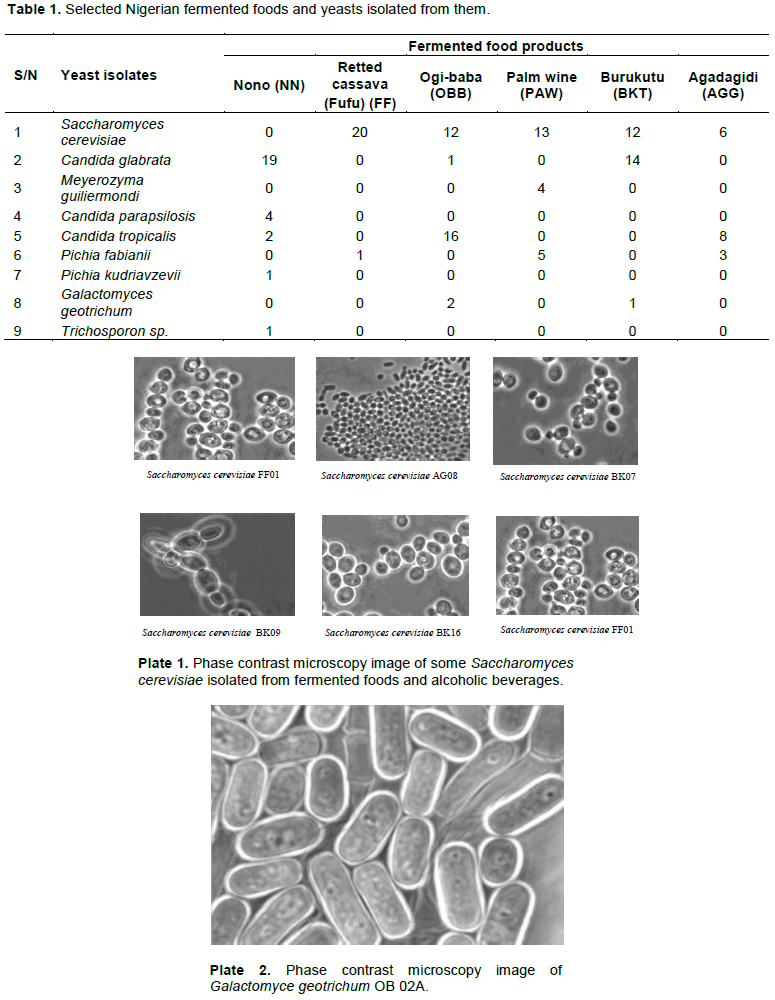 The authors appreciate an award of fellowship by Canadian Commonwealth Scholarship for graduate student exchange program which was used to carry out this work in Canada.