Emissions of biological contaminants (microbes) from intensive pig farming may cause environmental problems due to lack of proper waste management. This work was conducted to assess bacteriological pollution of soil in pig farm and to detect the presence of antibiotic resistance gene of the prevailing bacteria. Soil samples were collected from March to August 2013. The method included bacterial enumeration (10 -1 to 10 -8) in Nutrient, Xylose Lysine Deoxycholate (XLD), Eosin Methylene Blue (EMB) and MacConkey agars. Bacteria were identified using API 20E test kit; antibiotic susceptibility test were also determined and identification of resistance gene was carried out using molecular procedures. The viable cells in soil samples ranged from 0 to 2.44 × 1010 cfu/ml. Pseudomonas luteola, Salmonella choleraesuis spp arizonae, Escherichia coli 1, Enterobacter aerogenes, etc. were the predominant isolates. Sixty-seven percent of isolates were resistant to Penicillin G while 79% were resistant to Spectinomycin. The resistance genes detected in most isolates were Van A, InuA, Sul2, blaTEM and Otr B. The results showed that bacterial pathogens isolated from pig farm soil were not only diverse but also possessed multiple Antibiotic Resistance Gene (ARG) and this may have possible dire consequences on the environment and public health.

Mishandling of pig farm waste and animal droppings may impact negatively on the physical environment, especially polluting the soil with bacteriological pathogens. The pollution may consequentially cause serious waterborne and airborne diseases by either as a result of ingestion or direct contact,   or  inhalation  of  contaminated  aerosols (Ramírez et al., 2005). Applying animal waste to the soil may solve waste disposal issues; unfortunately this can also introduce bacterial pollutants to the soil, groundwater systems, and surface water in the surrounding environment (Obasi et al., 2008). Potential sources of bacterial pollution in pig farms include feedlot pastures,
treatment lagoons, manure storage, and also land application fields (Hong et al., 2013).
Pathogens can be transported in soil receiving waste through movement with infiltrating water, and surface run-off water and with the movement of sediments and waste particles (Jamieson et al., 2002). The bacteria that are already at the soil surface can act as suspended particles thus trapping even more bacteria which are deposited into the soil (Jamieson et al., 2002). Therefore, the bacteria that are deposited into the soil can travel with mobile water and their cells can interact with air or solid phase, which result in temporary or permanent immobilization (Åuczkiewicz and Quant, 2007). In such conditions, bacteria can also be entrapped in stagnant pore water between gas bubbles (Åuczkiewicz and Quant, 2007). During rain events, connectivity between mobile and immobile water increases, allowing bacteria to migrate with the advancing wetting front, thus allowing the bacteria to reach the ground water through absorption and infiltration and thus contaminate the groundwater (Åuczkiewicz and Quant, 2007).
Agricultural run-offs or seepage of pig farm waste are known to be critical sources of bacterial pollution in soil (Tyrrel and Quinton, 2003). Due to high use of antibiotics in pig farm as growth promoters and also to treat infections and diseases some of these antimicrobial agents are excreted with pig’s faeces in an unaltered state (Hong et al., 2013). This is because antibiotics are poorly absorbed into the gut of farm animals and therefore can be exposed to natural faunas and floras of soil through faeces and urine of pigs and in soil through surface runoff of pig farm seepage (Kumar et al., 2005). Some of the bacterial pathogens are able to resist the antibiotics in the gut of pigs and can be exposed to soil during defecation, thus introducing bacteria that possesses antibiotic resistance gene (ARG) in the environment (Obasi et al., 2008).
The rapid growth of antimicrobial agents in the environment as a result of the extensive use in pig farms emphasizes the need for intervention (Roberts, 2005). Most antibiotic residues cannot be removed by wastewater treatment plants and these residual antibiotics can be released into the environment and may exert selection pressure on natural soil microorganisms (Heuer et al., 2011). Furthermore, soil may receive inputs of antimicrobials, which can serve to amplify antibiotic resistance genes (ARGs) (Chee-Sanford et al., 2009; Heuer et al., 2011). The use of antibiotics agents can also cause overgrowth of bacterial expressing a resistance gene to the antibiotic agent and therefore may aggregate the evolution of complex genetic vectors encoding, expressing, linking, and spreading the bacteria and other resistance genes (Cheng et al., 2013). In order to further establish the contribution of agricultural practices to the environment, this study was conducted to assess the bacteriological dynamics of soil environment from a pig farm and to detect  the  presence  of  antibiotic resistance gene of the prevailing bacteria. 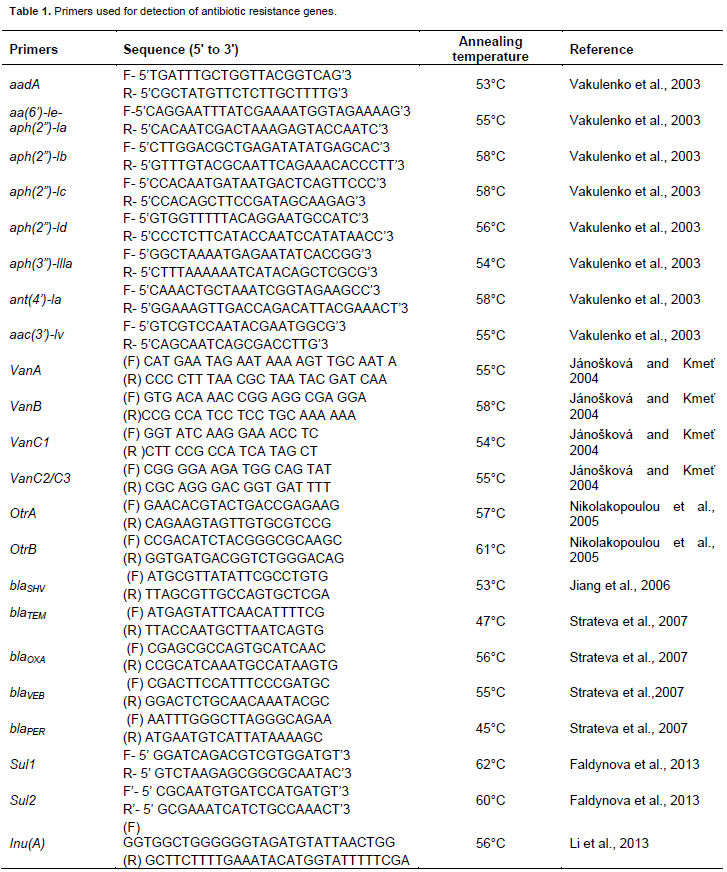 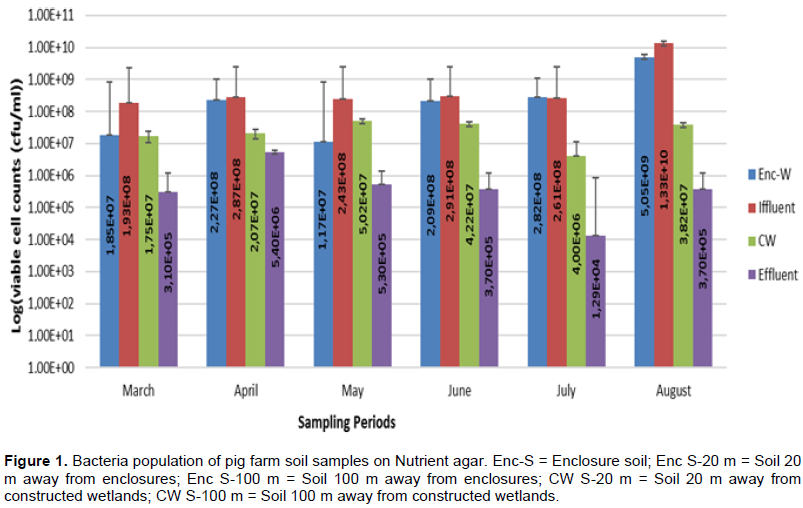 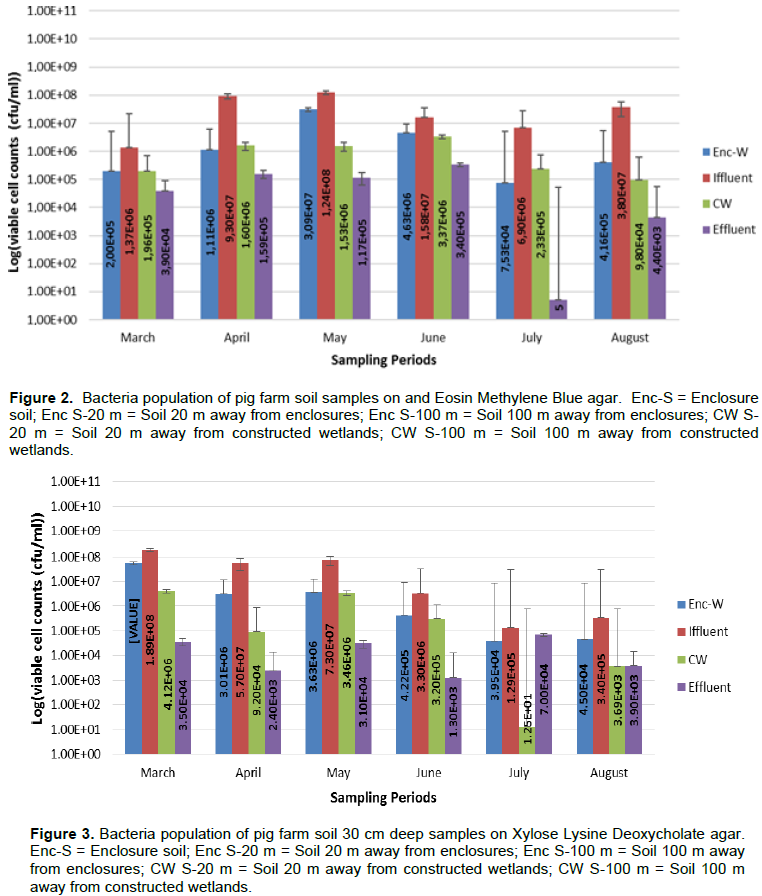 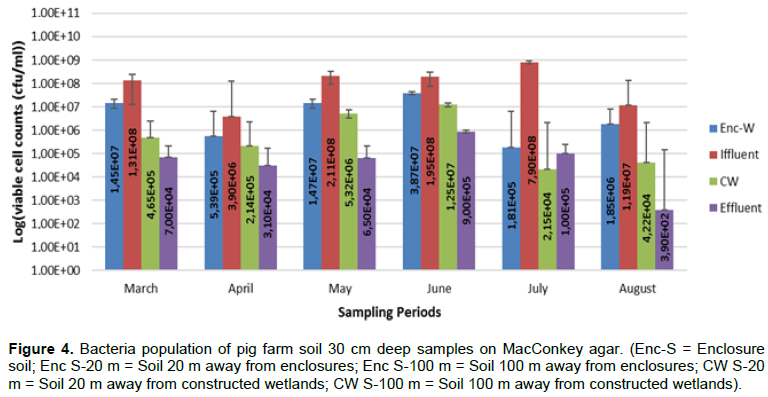 The analysis for susceptibility, using 18 different antibiotics, revealed resistant (R), susceptible (S) and intermediate (I) isolates to tested antibiotics are shown in Figure 5. The results showed  that  67% of isolates were resistant to penicillin G, 70 % to vancomycin, 70% to oxytetracycline and 79% to spectinomycin. Among the isolates, 88% were susceptible to norflaxacin 95% to ceftadizime, 72% to Tetracycline, and 60% to nitrofurantoin. In addition, 58% of the isolates were susceptible to neomycin and 51% to nalidixic  acid.  With ampicillin and gentamycin, the percentage of susceptible isolates (44 and 44% respectively) when compared to those that were resistant to both ampicillin and gentamycin (51 and 49% respectively) did not vary greatly. 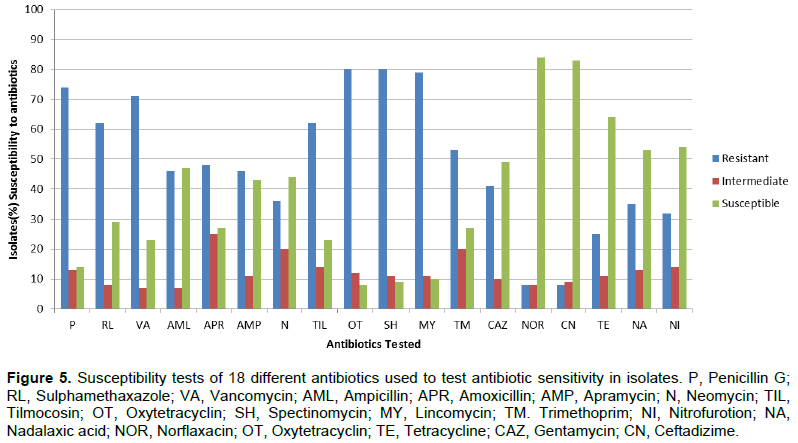 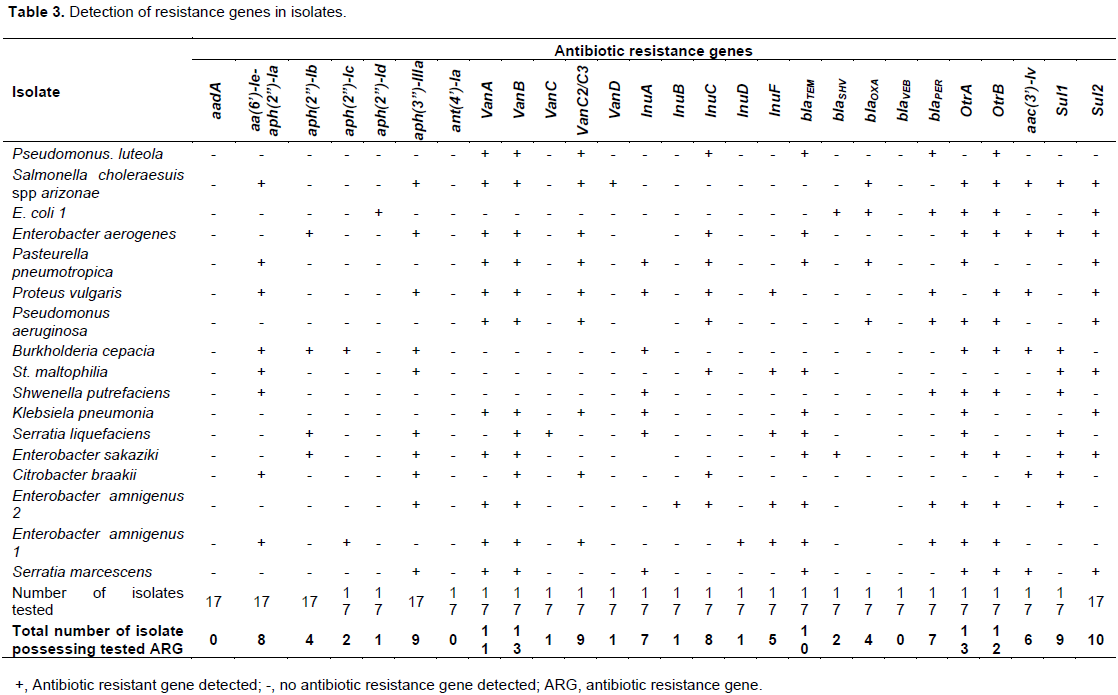 This study revealed that the soil at pig farm was contaminated with bacterial pathogens as bacteria such as E. coli, E. aerogenes, K. pneumonia, P. vulgaris etc. were detected especially with their ARGs in all soil samples from pig farm. The presence of this bacterial pathogens in soil sampled in the pig farm in this study was observed not only to be diverse but were also abundant and this may threaten the quality of the surrounding natural environment. In addition, this study also revealed that this prevailing bacterial pathogens isolated from pig farm soil had multiple ARG. The presence of ARG in soil causes horizontal gene transfer and may form a critical zone for the species-rich environmental microbiota and antibiotic-resistant microorganism to exchange genetic material with indigenous soil microorganism (Schulz et al., 2012).