GC-MS analysis of bioactive compounds and evaluation of antimicrobial activity of the extracts of Daedalea elegans: A Nigerian mushroom

Mushrooms are macrofungi with distinctive fruiting bodies and reproductive structures (Pilz et al., 2003). Higher fungi have been identified as a major source of biologically active natural products that provide varieties of active  secondary  metabolites  (Jonathan  and  Fasidi, 2003). Many people use them as food, but few use them as medicine (Aina et al., 2012; Jonathan et al. 2012). Several researchers have reported the antimicrobial potentials of many macrofungi (Jonathan and Fasidi, 2003; Jonathan et al., 2008; Olawuyi et al., 2010).
The medicinal values associated with mushrooms arose from superstitious beliefs and myths and these have provided information and curiosity for research studies. Research has shown that some of these claims are not mere myth but are authentic (Mau et al., 1998; Jonathan and Fasidi, 2003). Plants and macrofungi are large sources of bioactive compounds which can be exploited for the development of new novel drugs and due to the minimal side effects and low cost, about 80% of the world’s population now depend on natural products for the maintenance of their health (Jagtap et al., 2009). Daedalea elegans is a Nigerian wild mushroom and have been reported to have antibacterial and antifungal properties (Aina et al., 2012; Jonathan and Fasidi, 2003). Other Nigerian wild mushrooms have also been reported to have antimicrobial potentials, but little/no study has reported the bioactive compounds conferring these antimicrobial properties. Therefore, it is important to determine bioactive compounds present in the extracts which are responsible for the bioactivity of the mushroom and their medicinal values making the GC-MS analysis inevitable. GC-MS is the combination of separation (GC) and identification (MS) techniques making it an ideal technique for both quantitative and qualitative analysis of volatile and semi-volatile compounds. This study was aimed at screening for the presence of phytochemicals in D. elegans, identify the compounds present in the acetone and ethanol extracts of D. elegans and determine the therapeutic properties of the extracts.

Sample collection and identification: D. elegans used in this study was collected from different areas (University Botanical Gardens and Nursery Section of Botany and Microbiology Department) within the University of Ibadan campus between September and November 2016 in a sterile polyethylene bag and transported to the Botany Laboratory of the University of Ibadan. The mushroom was immediately identified in the laboratory by their spore prints and by comparing their morphological, anatomical and physiological characteristics with the standard descriptions of Zoberi (1978) and that of Alexopolous et al. (1996). This identification was authenticated by Professor S. G. Jonathan, Department of Botany, University of Ibadan, Nigeria. After proper identification was done, the sample was then transported to Babcock University where the experiment was carried out.
Microorganisms
The stored culture of Escherichia coli, Klebsiella pneumoniae, Pseudomonas aeruginosa and Staphylococcus aureus were collected from the Medical Laboratory Science Department while fungi strains (Aspergillus niger, Aspergillus flavus and Fusarium chlamydosporum) were obtained from store culture from the Department of Microbiology both of Babcock University, Ilishan-Remo, Ogun State.
Preparation of crude extract
The fruiting  body of the test  mushroom  was allowed  to  air  dry  at room temperature. The dried carpophore was divided into bits and pulverized with a grinding machine. Eighty grams of the powdered sample was soaked separately in 700 ml of 99.7 - 100% (absolute) ethanol and acetone in an Erlenmeyer flask. The flasks were covered with cotton wool and aluminum foil and allowed to stand for 48 h with intermittent shaking. It was filtered by use of Whatman filter paper no 1 and the sample was re-suspended in solvent and allowed to stand for 7 days for another extraction. This was also filtered through Whatman filter paper no 1 and the filtrate obtained from both extractions was concentrated using rotary evaporator at 40 and 600C for acetone and ethanol respectively. The solvents were recovered and the extract was collected and was further concentrated using hot air oven at 45°C for 19 and 28 h for acetone and ethanol respectively and stored in the refrigerator prior to further analysis.
Assay for antimicrobial activities
The antimicrobial activities of both acetone and ethanol extracts were determined using agar well diffusion method of Stoke and Ridgway (1980). Using a 5mm sterile cork-borer, holes were bored in plates containing already prepared Mueller Hinton Agar (MHA) and Potato Dextrose Agar (PDA). Extracts were reconstituted in Dimethyl sulfoxide (DMSO) to make a concentration of 20.0 and 40 mg/ml for both fractions. 100 µl of the reconstituted extracts was then transferred to the holes. The DMSO used in the dilution of solid mushroom extracts was used as a control. Plates were then incubated at 37 and 28°C for 24 and 72 h for bacteria and fungi respectively and observed for zones of inhibition. All the tests were carried out in duplicates.
GC-MS analysis
GC-MS analysis was conducted at Shimadzu Training Center for Analytical Instruments (STC) Lagos. The extracts were analyzed by GCMS-QP2010SE (SHIMADZU, JAPAN) equipped with DB-5 MS (0.25 µm × 30 m × 0.25 mm). Helium was used as the carrier gas at a flow rate of 0.9ml/min. 1.0µl injection volume, injector temperature was 250°C; ion source temperature was 200°C. Interface temperature was 250°C. Oven temperature was 60°C held for 2 min with an increase of 15°C/min to 120°C, ending with 300°C (15°C/min). Mass spectrometer was set to operate in electron ionization mode with an ionizing energy of 70eV as acquisition mass range from 45-700 a.m.u. Total running time was about 30 min. Further identification was made by comparison of their mass spectra with those stored in the National Institute of Standards and Technology (NIST) database.

Forty-four and twenty-eight compounds were identified in the ethanol and acetone extracts respectively. The dry weight of the yield was 1.2 and 0.58 g for ethanol and acetone fractions respectively which can be said to be directly proportional to the number of compounds present in the extracts. Compounds were identified from NIST database Library of GC-MS instrument. Identified compounds with their name, retention time and peak (area) percentage are given in Tables 1 and 2, while the GC-MS chromatogram is shown in Figures 1 and 2. 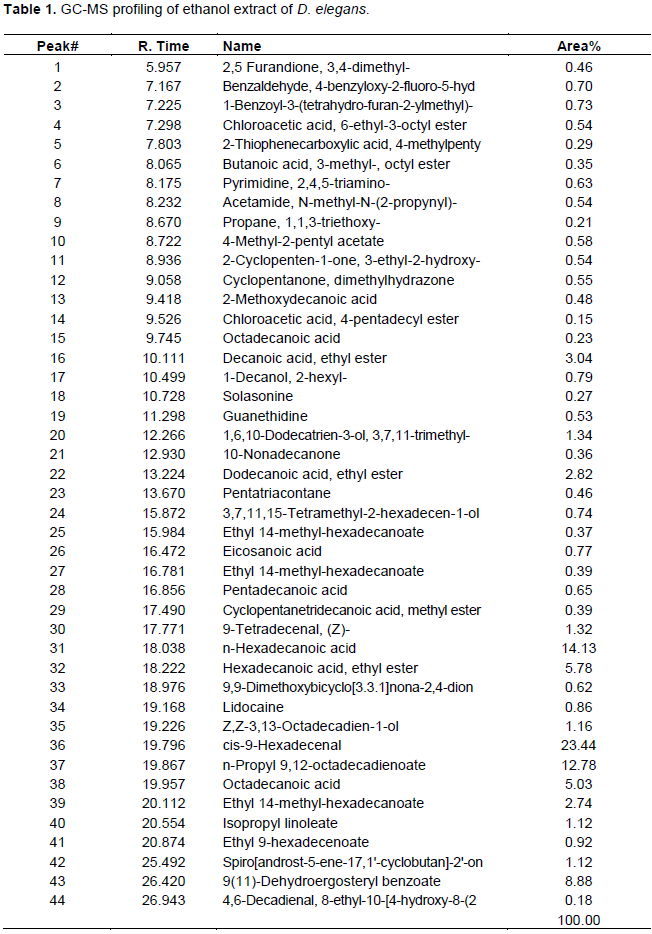 This study is the first GC-MS analysis on D. elegans; however, the result obtained from this study is similar to other GC-MS studies done on other mushroom types as some of the compounds identified here are the same (Parmar and Kumar, 2015) as well as those obtained from other plant sources (Kriti et al., 2014; Shah et al., 2015).
Mushrooms are rich sources of natural antibiotics and therefore mushrooms extracts have been investigated for their antimicrobial activity. Mushrooms are known to produce various compounds having antiviral, antibacterial and antifungal properties. Antifungal activity was reported from Sparasis ramosus as early as 1923 by Falck (Brian, 1951) but the first investigations on the potential of mushrooms as sources of antibiotics were performed by Anchel et al. (1941) when they examined extracts of fruiting bodies and mycelia culture from over 2000 species. Wilkins and Harris (1946) observed antibacterial activity in Fomes, Polyporus and Tramates. Bohus (1969) reported  the   antifungal   activity  of  Coprinus  comatus. Musilek and Sasek (1967) reported the antimicrobial activity of Flummulina velutipes. Benedict and Braddy (1972) tested the activities of selected mushroom metabolites on some bacteria and they reported that the best inhibitory responses were against Gram positive bacteria including acid fast bacterium (Mycobacterium smegmatis) and pathogenic strains of yeast (Candida albicans). They also reported that antibacterial property of the mushrooms is due to the presence of polyacetylene. Vogel et al. (1974) reported that antibacterial activity of Agaricus bisporus is due to the quinoid and Phenolic derivatives. Many of the external secondary metabolites (extracellular secretions by the mycelium) of mushrooms are known to combat bacteria (Benedict and Braddy, 1972; Kupra et al., 1979) viruses (Eo et al., 1999; Brandt and Piraino, 2000) and protozoa (Lovy et al., 1999).
In the present study, no zone of fungal and bacterial inhibition was found at concentrations of 20 and 40 mg/ml for both fractions. This is in contrast to the studies of Jonathan and Fasidi (2003) and Aina et al. (2016) which reported that the ethanol extract of D. elegans had an antagonistic effect on the tested organisms. The antimicrobial result obtained from the current study can be substantiated by the result obtained from the GC-MS analysis of the extract as the most abundant compounds identified were anti-inflammatory. Of all the 44 and 28 compounds of the ethanol and acetone extracts, only one (hexadecanoic acid) has been previously reported by Henry et al. (2002) and Praveen et al. (2010) to have antimicrobial property, however the concentration of this compound in D. elegans is very low (5.78%) and may explain the inactivity observed in the sensitivity tests.
The most abundant compounds of D. elegans as observed by the GC-MS profiling in this study is n-hexadecanoic acid (14.13 and 23.59% for ethanol and acetone respectively) which has been previously proved to have anti-inflammatory, antioxidant, hypocholesterolemic, flavour, nematicide, pesticide, anti-androgenic activities (Henry et al., 2002; Praveen et al., 2010). Hexadecanoic acid (5.78%) found only in the ethanolic extract is used in the production of soap, cosmetics and industrial mold release agents, anti-inflammatory, antibacterial and antifungi (Henry et al., 2002; Praveen et al., 2010). 9, 12-octadecadienoic acid (Z,Z) at a concentration of 12.78 and 44.64% for ethanol and acetone respectively is a polyunsaturated essential fatty acid in mammalian nutrition and is used in biosynthesis of prostaglandins and cell membranes (O’Neil, 2013; Adeoye-Isijola et al., 2018), anti-inflammatory, hepatoprotective, anti-arthritic, anti-histamine (Henry et al., 2002). Octadecanoic acid with concentration of 5.03 and 6.98% for ethanolic and acetone extracts respectively was reported by Duke (2013) as emulsifier for food and no bioactivity. Hexadecenoic acid ethyl ester is a flavouring agent used in foods including condiments and seasonings, hair and skin conditioning agent, anti-inflammatory, antioxidant, hypocholesterolemic, nematicide, pesticide, lubricant, antiandrogenic, hemolytic, 5-alpha reductase inhibitor (Shah et al., 2015). Cis-9-hexadecenal is an agrochemical of the attractant category. It is a pesticide used for preventing, destroying or mitigating pests. 9(11)-dehydroergosteryl benzoate is used in preserving foods, fats, fruit juices, alkaloidal solutions; manufacture of benzoates and benzoyl compounds, dyes; in calico printing; for curing tobacco; as standard in volumetric and calorimetric analysis (O’Neil, 2013); Plasticizers, benzoyl chloride; alkyd resins; food preservative; seasoning tobacco; flavors; perfumes; dentifrices; standard in analytical chemistry (Lewis, 2007).

Among all the compounds obtained from the GC-MS analysis of the extracts, only hexadecanoic acid has previously been reported to show antibacterial and antifungal potencies. This compound was present in the ethanolic extract of D. elegans, albeit at low concentration (5.78%) which may explain the reason for its inactivity on the microorganisms tested.
The many chemical components found in the Nigerian wild mushroom as seen from the GC-MS analysis of acetone and ethanol extracts of D. elegans indicates the beneficial role it can contribute to human beings and can be considered as a source of different supplements and curative for many illnesses without any fear of pathogens developing resistance due to its natural origin. The mushroom exhibits great potentials in the pharmaceutical industry as it is a great source of anti-inflammatory agent and antioxidant. D. elegans can also be exploited in other areas of life such as nutraceutical, cosmeceutical, agriculture, food, textile and paint industries. However, the medicinal potential of these compounds needs further studies on the toxicity level to be able to develop safe drug(s) from the mushroom sample.