Tanzania has the third largest livestock population in Africa comprising 25 million cattle out of which 98% are indigenous breeds (FAO, 2020). The dairy production in Tanzania is categorized into two systems: traditional system and dairy system (Munyaneza et al., 2019). Traditional system is the most dominant and it is based on both milk and meat products; dairy system is based mainly on milk production (URT, 2017). In the  year  2018 about 934,628 tonnes of raw and heat-treated milk were produced in Tanzania. Milk production contributes to income, food security, nutrition and household livelihood (FAOSTAT, 2020). The sector contributes to 7.4% of total national GDP and the annual growth rate (2.2%) of the sector is considered low (FAO, 2020). Raw milk is a valuable nutritious food, highly perishable, with short shelf-life and it is an excellent medium for the growth of microorganisms, particularly harmful bacterial pathogens that can cause spoilage and diseases to consumers (FAO, 2021). Heat treatment of milk such as pasteurization and ultra-high temperature (UHT) allows the preservation of milk and helps to reduce food-borne illness (Melini et al., 2017).
According to FAO/WHO (1982), pasteurization is defined as a heat treatment process applied to a product such as milk with the objective of minimizing numbers of harmful micro-organisms to a level at which they do not constitute a significant health hazard with minimal chemical, physical and organoleptic changes in the product. It also extends the storage time for some products by reducing the number of spoilage micro-organisms in the product (FAO/WHO, 1982). Codex Alimentarius (2004), defined UHT treatment of milk and liquid milk products as the application of heat to a continuously flowing product using such high temperatures for such time that renders the product commercially sterile at the time of processing. When UHT treatment is combined with aseptic packaging, it results in a commercially sterile product at the heating range of 135 to 150°C for 1 s up to 4 s (Melini et al., 2017). AFM1 is a heat stable compound that can survive heat treatment such as pasteurization, UHT technique and autoclaving but also AFM1 may be reduced but not completely destroyed by heat treatments (Mahmoodi et al., 2019; Tahira et al., 2019).
Aflatoxins are amongst the most poisonous mycotoxins and are produced by Aspergillus flavus, Aspergillus parasiticus and Aspergillus nomius fungi found in soil and that can grow in plant, human food products and feeds (WHO, 2018). The most important aflatoxins in order of toxicity are BI, B2, G1, and G2 (Ismail et al., 2018; Tahira et al., 2019). Aflatoxins may also be found in the milk of animals that are fed contaminated feed, in the form of aflatoxin M1, a hydroxylated metabolite of aflatoxin B1, within 12 h of contaminated feed consumption (Langat et al., 2016). Once lactating cow consume contaminated feeds with aflatoxin B1 it is absorbed into the gastrointestinal tract and biotransformation occurs in the liver by cytochrome P450 enzymes to form a 4-hydroxy metabolite known as aflatoxin M1, a compound  soluble in water and therefore it is easily excreted in milk during milking (Daou et al., 2020; Tahira et al., 2019).
Aflatoxin M1 is a hepato-carcinogen, classified as a group 1 carcinogen by International Agency for Research on Cancer (IARC Monograph, 2018). Aflatoxin M1 is heat-stable and can survive pasteurization, autoclaving and thermal inactivation (Zakaria et al., 2019). The contamination of milk and milk products by aflatoxin M1 has been reported in various countries such as Morocco (Mannani et al., 2021), Iran (Mahmoodi et al., 2019), Lebanon (Daou et al., 2020), Turkey (Eker et al., 2019), Pakistan (Tahira et al., 2019), and Kenya (Langat et al., (2016).
The occurrence of aflatoxin M1 in milk in Tanzania reported earlier indicated that 92% of raw cow milk retailed in Dar es Salaam city was contaminated with aflatoxin M1 (Urio et al., 2006) and 83.8% of raw cow milk from households in Singida was contaminated with aflatoxin M1 (Mohammed et al., 2016). However, there is no information on aflatoxin M1 contamination of pasteurized and ultra-pasteurized (UHT) milk in Tanzania, as well as the awareness of contamination. Thus, the aim of this study was to carry out surveillance of the level of contamination of aflatoxin M1 in pasteurized and ultra-pasteurized marketed milk in Dar-es-Salaam, commercial capital of Tanzania. The results of this study will provide information on level of milk contamination by aflatoxins and contribute to raise awareness and efforts of food control authorities in developing strategies to ensure public safety.

Sample collection
A total of 118 milk samples both ultra-high temperature (UHT) and pasteurized were purchased randomly from different mini markets and supermarkets located in Kinondoni, Ilala, Temeke, Ubungo and Kigamboni districts of Dar es Salaam region a commercial city of Tanzania during December 2020 and January 2021. This region was selected on purpose since it is the largest urban consumer market with availability of milk brands from different regions in Dar es Salaam shops/outlets. Seventy-five samples of pasteurized milk and 43 UHT milk samples were collected. The larger number of pasteurized milks collected is due to the fact that most dairies produce pasteurized milk.
The collected samples originate from two climatic zones of Tanzania, hot humid coastal zone (Tanga, Morogoro, Dar es Salaam and Zanzibar) and temperate highland zone (Kilimanjaro and Iringa). All samples were randomly purchased, coded and transported in an ice box together with their original packaging prior to laboratory analysis at the Tanzania Bureau of Standards (TBS) food laboratory in Dar es Salaam.
Aflatoxin M1 analysis
Reagents standards, chemicals, columns and other materials HPLC grade acetonitrile, methanol and glacial acetic acid were obtained from Fisher Scientific UK. A standard aflatoxin M1 (0.504 µg/L) solution was obtained from Biopure, Romer Labs Diagnostics GmbH, Tullin Austria. Distilled water was produced with a Milli-Q Integral 15 water purification system, France. Whatman Filter paper No. 4 (Whatman Inc., Clifton, NJ, USA) and AflaStarTM M1 R, Immunoaffinity Columns (IAC) for aflatoxin M1 were from Romer Labs, Austria.
HPLC conditions
The HPLC system (Infinity II, Agilent technologies) with vial sampler, Quant pump, MCT and FLD Spectra (model 1260) with excitation set at 365 nm and emission 450 nm was used. Instrument settings were: injection volume 50 µL, pump flow rate 0.8 mL/min, run time was 6 min, HPLC analytical column 4.6×150 mm (Waters® Spherisorb® 5 µm ODS1, Ireland) column oven set at 25°C, mobile phase comprised 2% acetic acid: acetonitrile: methanol (40:35:25) that was prior degassed for 20 min and run isocratically. Data acquisition and processing were done with OpenLab software (Version 3.4, Agilent technologies). Aflatoxin M1 peak in the chromatogram was identified by comparing its retention time with that of the analyzed aflatoxin M1 standard under the same conditions.
Standards preparation
Exactly 1985 µL of aflatoxin M1 standard was added in 9015 µL of aflatoxin M1 mobile phase to get a stock solution of100 µg/L. This solution was used to prepare 5, 8 and 10 µg/L standards by dilutions with mobile phase. The 10 µg/L standard was further diluted with mobile phase to prepare 0.1, 0.5, 1 and 3 µg/L standard. These seven standards were used for validation and quality control of the method.
Extraction and quantification of aflatoxin M1 by HPLC
The method for extraction, detection and quantification of aflatoxin M1 in the milk samples was done in a dark room according to Behfar et al. (2012) with minor modifications. Fifty milliliters of the milk samples were measured in Teflon tubes, warmed up in the water bath (ThermoHaake IP30, Germany) set at 37°C. Samples were centrifuged at 4000 rpm for 15 min (Eppendorf 5810R, German) and the fat layer was removed completely and milk was filtered through filter paper (Whatman No. 4, UK). 10 mL of the filtered milk sample was passed through aflatoxin M1 immuno-affinity column (AflaStarTM M1 R IAC column, Romer Labs, Austria) at steady flow rate of 2 to 3 mL/min. The column was washed with 10 mL distilled water (Milli-Q Integral 15 water purification system, France) two times. The column was dried by means of the syringe plunger and the toxins were eluted by 1 mL acetonitrile in two portions of 500 µL into test tubes. The extract was evaporated with nitrogen concentrator at 50°C to dryness gently with stream of nitrogen. The residues were reconstituted with 500 µL of mobile phase and vortexed ready for injection into HPLC system.
Method validation
Quality control
Linearity of the method was determined by running a seven-point calibration curve that was prepared from standard solutions having concentrations of 0.1, 0.5, 1, 3, 5, 8 and 10 µg/L each ten times. Peak area was plotted against concentration to give a regression equation which was used to determine aflatoxin M1 concentrations. The calibration curve is described with the equation y = 0.4796x + 0.0044 (R2 = 0.9992).
Recovery of aflatoxin M1
The accuracy of the method was established based on the percentage recovery, and contaminated milk  which  was below  the limit of detection was treated as blank sample and spiked with 1.0 µg/L aflatoxin M1 standard solution, it was then run-in triplicate parallel with the samples. Recovery was calculated as: 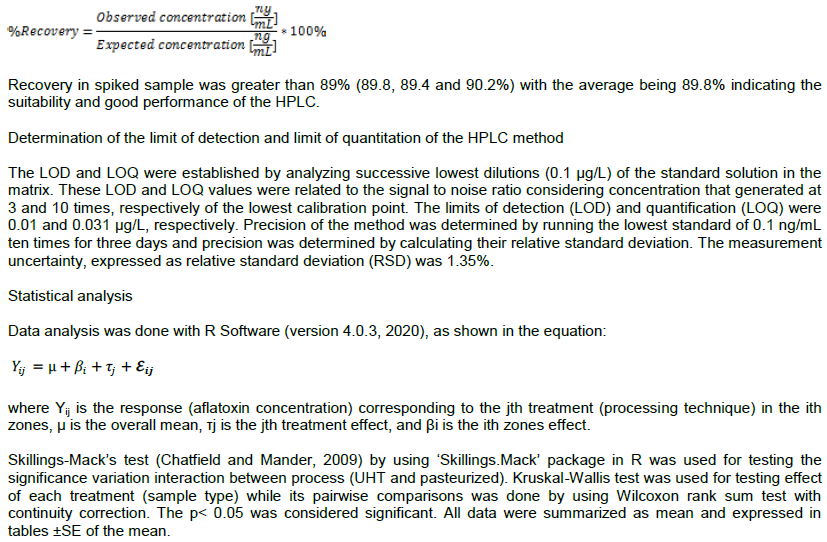 In the current study, high AFM1 levels were found in both UHT and pasteurized milk samples collected from supermarkets and dairy shops in Dar es Salaam city. Aflatoxicosis is still one of the main public health concerns in Tanzania that lead to health hazard in all population particularly children. There is need to reduce AFM1 transmission in milk by controlling aflatoxin B1 contamination in animal feed and feed ingredients by adopting Good Agriculture Practices (GAP) at farm level as well as improved storage conditions. It is important that farmers and other stakeholders of the dairy industry be educated on the potential harmful effects of AFM1 on human health.