Nutrient and mineral components of wild edible mushrooms from the Kilum-Ijim forest, Cameroon

Kilum-Ijim forest is a montane forest in the North West Region of Cameroon. Wild edible mushrooms are mostly consumed by the communities of Kilum-Ijim as substitute of meat to obtain protein, hence the need to evaluate the nutrient and mineral components of the species consumed in these communities. The most eight preferred wild mushroom species from ethnomycological studies are: Polyporus tenuiculus, Termitomyces striatus, Termitomyces macrocarpus, Auricularia polytricha, Laetiporus sulphureus, Termitomyces sp.1, Termitomyces sp.2 and Polyporus dictyopus were identified by ITS gene region. These species were analysed for nutrient and mineral contents using standard protocols. Significant differences in nutrient values were demonstrated among these mushroom species. The study results on dry weight basis range from 43.49 to 64.88 for carbohydrates, 6.60 to 30.69 for crude protein, 7.74 to 14.10 for ash, 2.17-3.22 g for fat and 11.60 to 20.69 g per 100 g for crude fibres with significant differences (P? 0.05) between species for each nutrient. The dry matter content ranged from 12.69-17.77 g per 100 g while the total calorie values ranged from 285.16-319.27 Kcal per 100 g. Mineral nutrient analyses also showed that these mushrooms are rich in both macro and micro nutrients. In conclusion, the study revealed that soil inhabiting mushrooms especially the Termitomyces species have nutritional values which can greatly supplement diets especially in rural communities.

Edible mushrooms are mostly growing in forests in association with woody parts of trees either as  parasite, saprophyte or as symbionts in the soil (Chamberlain et al., 1998). Macrofungi have several ecological functions in both natural and agroecosystems, and are widely exploited by humans for food and medicinal purposes (Mueller et al., 2007; Osemwegie et al., 2006; Boa, 2004). Mushrooms represent one of the world’s greatest untapped resources of nutrition (Wani et al., 2010). More than 2,000 species of mushrooms exist in nature; however, less than 25 species are widely accepted as food and only a few have attained the level of an item of commerce (Lindequist et al., 2005). Mushrooms have probably been a part of the human omnivore diet ever since humans have evolved as a species. Actually, it is quite possible that many fungal species developed the highly nutritious sporocarps concurrently with the evolution of omnivores, as a very small number of animal species has been reported to be strictly mycophagous (Witte and Maschwitz, 2008).
Macrofungi play important roles in the lives of many people around the world. They provide two main benefits; they are a source of food, income and also have medicinal properties. The awareness of wild edible fungi and their importance to people are generally poor. Subsistence uses in developing countries have often been ignored. The importance of wild edible fungi to people in developing countries may also have gone unremarked for the simple reason that many of the collections are for personal use (Yorou and Kesel, 2002).
The most cultivated mushroom worldwide is Agaricus bisporus, followed by Lentinula edodes, Pleurotus spp. and Flammulina velutipes (Aida et al., 2009; Chang and Miles, 2004). Newer species or varieties of wild mushrooms like Tricholoma spp. (Spain), Cantharellus spp., Hydnum spp., Lactarius spp., Xerocomus spp., Amanita spp. and Hygrophorus spp. (Greece), Lactarius spp., Tricholoma spp., Leucopaxillus spp., Sarcodon spp. and Agaricus spp. (Portugal), Ramaria spp., Psathyrella spp. and Termitomyces spp. and Agaricus spp., Amanita spp., Boletus spp., Hydnum spp., Hypholoma spp., Lactarius spp., Pleurotus spp., Russula spp. and Tricholoma spp.  from various countries have been investigated for their nutritional values and antioxidant activity (Aletor, 1995; Barros et al., 2007; Ouzouni et al., 2007). Despite these advances in mushroom cultivation (Manjunathan and Kaviyarasan, 2011), over 95% of edible mushrooms are still collected from the wild in most African countries.
The people of West African sub-region still rely on wild edible mushrooms for their livelihood especially as a low-cost alternative for animal proteins and flavouring in diets. In addition, they represent a venerable source of subsistent income and incontrovertible raw material in local traditional medicine practice (Osarenkhoe et al., 2014).
In Cameroon, edible and medicinal mushrooms are ubiquitous and constitute a substantial volume of internal trade especially by women in rural areas (Kinge et al., 2014; Teke et al., 2018). Mushrooms have good nutritional value particularly as a source of protein that can enrich human diets, especially in some developing countries where animal protein may not be readily available and are expensive (Heleno et al., 2010). Edible mushrooms have high nutritional values since they are quite rich in protein, vitamins, mineral, fibers and various amino acids (Hyde et al., 2010; Luangharn et al., 2014; Bandara et al., 2015), with an important content of essential amino acids, and low in fat contents. Edible mushrooms also provide a nutritionally significant content of vitamins (B1, B2, B12, C, D and E) and have high antioxidant abilities (Manjunathan and Kaviyarasan, 2011; Mattila et al., 2001), although the total nutrient contents vary significantly among species. Hence, due to their high content of nutritional values, edible wild mushrooms are considered in many parts of tropical Africa as “meat” for the poor communities (Kinge et al., 2014).  Based on their chemical composition, mushrooms have also been reported as therapeutic foods, useful in preventing diseases such as hypertension, hypercholesterolemia, and cancer (Shashirekha and Rajarathnam, 2011).
Wild edible mushrooms are one of the important natural resources on which the local people of all nationalities rely heavily, and these mushrooms certainly play a role in improving the food nutrition (Yang, 2002). Most people eat mushrooms, mostly because of its flavour, meaty taste and medicinal value (Grangeia, 2011). Hence, this study set out to determine the nutrient and mineral components of some wild edible soil and wood inhabiting mushrooms in order to assess its nutritional value and enhance their cultivation. Thus the objective of this study was to evaluate and compare the nutrients and minerals from soil and wood inhabiting edible mushroom species which would increase our understanding of their nutritional potential and their possibility for cultivation using different substrates and development of new foods in the food industry.

Study area and sample collection
Fresh fruiting bodies for proximate and nutritional analysis were collected from five community forests in the Kilum-Ijim (Figure 1). Prior to entering into the Kilum-Ijim forest, visitations were made to the various chiefs and administrative authorities within the Kom and Oku districts to sought traditional and administrative permission to use the forest. Five community forests out of 18 were selected based on accessibility after a reconnaissance survey was carried out in the study area.
Nutritional analysis of edible mushrooms
The eight species used for nutritional and mineral analysis were identified using DNA barcoding of the ITS regions using ITS1/ITS 4 primers (Teke et al., 2017). The species were identified as: Termitomyces microcarpus, Laetiporus sulphureus, Auricularia polytricha, Termitomyces striatus, Polyporus tenuiculus, Polyporus dictyporus,  Termitomyces  sp. 1 and Termitomyces  sp. 2. These eight mushroom species had also been identified as edible from an ethnomycological survey (Teke et al., 2018). One Kg each of dried fruiting bodies of the different samples were separately milled to powder using a blender and stored in air tight bottles at 4°C until use. The samples were then analysed for dry moisture content, crude protein, carbohydrates, energy values, total fat, crude fibre, total ash and mineral contents using standard protocols of Association according to Official and Analytical Chemists (AOAC, 2005). 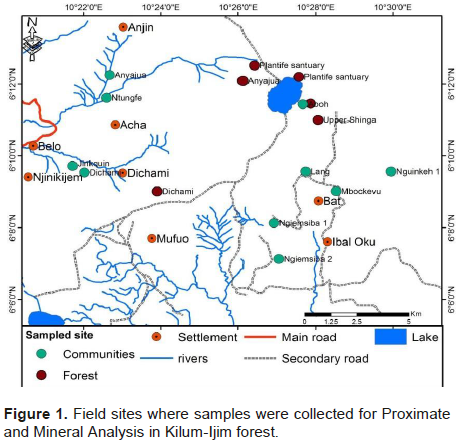 From the results obtained, it can be seen that all the mushroom species can be used as nutrient sources to upgrade the diet of the communities. These high nutritional qualities and unique flavors of the studied mushrooms are likely to be poorly known and to be lost if they are not documented, so it is imperative that a nutritional database of these mushrooms is set up to collect and improve the characteristics of these unique species and for their eventual domestication.

The authors gratefully appreciate the Rufford Small Grant award and the BecA-ILRI Hub through the Africa Biosciences Challenge Fund (ABCF) program towards the realization of this work. The ABCF Program is funded by the Australian Department for Foreign Affairs and Trade (DFAT) through the BecA-CSIRO partnership; the Syngenta Foundation for Sustainable Agriculture (SFSA); the Bill and Melinda Gates Foundation (BMGF); the UK Department for International Development (DFID) and; the Swedish International Development Cooperation Agency (SIDA).