Ofam is a Ghanaian indigenous cakelike product made mainly from senescent plantain and local flours from cereal, grain and/or tuber sources. The effect of three flour types (steeped corn flour (SCF), roasted corn flour (RCF) and kokonte flour (KF)) and flour concentrations (20, 17.5, 15, 12.5 and 10%) on the physicochemical characteristics and sensory acceptability ofam was investigated. Parameters such as moisture, pH, total soluble solids (TSS), viscosity, colour and texture profile were measured using standard methods.  A 50-member untrained panelist was used to conduct a sensory acceptability test using a 9-point hedonic scale. Ofam batter were characterised by high moisture content (ranging from 52.7 to 55.1%), pH (ranging from 5.4 to 5.5), TSS (ranging from 2.30 to 2.62) and a dark colouration (L-value ranging from 30.39 to 45.55). The flour type and concentration affected the viscosity of the batter which also influenced the hardness of ofam. RCF ofam was the hardest (1541.49 g Force) while KF ofam was the softest (966.79 g Force).  Generally, RCF ofam was the most preferred (7.0) whilst KF of was the least preferred (6.68). Also, ofam with flour inclusion of 15% was also the most preferred (7.89) while products with 20% flour inclusion were the least preferred (6.47). This would form the basis for the standardisation of the product and formulation of a convenient powder mix suitable for ofam.

Ofam is a Ghanaian indigenous cakelike product produced mainly from senescent plantain, which is taken as a snack or as an accompaniment to a main meal. Senescent plantain puree or paste, flour and unrefined palm oil are homogenously mixed into a batter and subsequently baked to make ofam. Other optional ingredients such as onion, ginger, African pepper, calabash nutmeg and cayenne pepper may be added as flavour and taste enhancers. These flavour and taste enhancers improves consumers acceptability of the product (Adi et al., 2019). There are variations in the preparation of this indigenous cakelike product across different ethnic backgrounds and hence the different derivatives (Adi et al., 2018).  The use of senescent plantain for these products contributes to value addition of the already deteriorating commodity (Flore et al., 2013; Severin et al., 2013).
Senescent plantain and flour form the most substantial ingredients in the ofam recipe, and they considerably influence the texture of the product. The most commonly used flours for ofam and other senescent plantain products have been cassava flour (kokonte), roasted corn flour and steeped corn flour (Adi et al., 2018). Flour provides the structural matrix around which all the other ingredients are mixed to form a dough or batter in baked foods. The texture, appearance and even shelf-life of flour products are influenced by the type of flour and the nature of starch present in the flour (Gallagher et al., 2003, 2004; Marston et al., 2016; Niba, 2005). These attributes are also influenced by the presence of fat. In addition to its flavour enhancing properties, fat provides tenderness to most baked goods. An adequate amount is essential to prevent product dryness or sogginess  (Agrahar?Murugkar et al., 2016).
Baking is associated with heat transformation of dough or batter (which contains flour) into a unique food product with special sensory characteristics (Mondal and Datta, 2008). This complex process results in a series of physical, chemical and biochemical changes in food as the gelatinization of starch, denaturation of protein, liberation of carbon dioxide from leavening agents, volume expansion, evaporation of water, crust formation and browning which contribute to the quality of the finished product (Sumnu, 2001; Yolacaner et al., 2017). Browning reactions such as caramelization and Maillard reaction are a non-enzymatic chemical reactions resulting in coloured and flavour compounds formation during baking (Fennema, 1996; Purlis, 2010).
According to Nashat and Abdullah (2016), sensory quality attributes which influence consumer preference for baked goods are the external or crumb colour, texture and flavour. In a consumer study on senescent plantain products, sensory quality attributes such as taste, appearance, texture and aroma were identified as the indicators of product acceptability. These quality attributes are influenced by the constituents of the baked product. During ofam preparation, the variation in the type and quantity of flour used is expected to affect its colour, flavour, texture and ultimately its sensory acceptability. However, there is no study to elucidate these. Establishing these baseline data is required for product standardization and commercialisation.
Therefore, this study was aimed at evaluating the effect of different flour types and flour concentrations on the physicochemical characteristics of ofam batter and baked ofam and also to evaluates the sensory acceptability of the baked products.

Raw material preparation
Matured plantain at ripening stage 1 was harvested at JE Farms in Mankessim (Central Region, Ghana). The plantain was de-handed and kept on a bench in a room at ambient temperature (27 ± 2°C) and allowed to ripen to stage 7 (at the onset of senescence) for processing. At ripening stage 7, the plantains were washed, peeled packaged in Ziploc bags (in 1.0 kg portions) and kept frozen for further use. Frozen senescent plantain pulp was allowed to thaw in an ice chest overnight. The thawed senescent plantain was milled into a puree using a Philips Food Processor (hr7761/00, Brighouse, UK). The puree was used for the batter preparation and subsequent baking.
Ofam batter preparation and baking
A total of fifteen ofam batters were prepared for this study. The batter preparation and subsequent baking followed a 3 × 5 design, where three different flour types (kokonte (KF), steeped corn flour (SCF) and roasted corn flour (RCF)) were used as binders at five different concentration. The flour concentrations were generated by the Minitab software (version14) using a lower limit of 10% and an upper limit of 20% with two midpoints to obtain flour concentrations of 20, 17.5, 15 12.5, and 10% for all three different flour types. All other ingredients were kept constant for all fifteen samples (Table 1).
Ofam samples were prepared as described by Adi et al. (2018).  Batter samples were prepared in 1.0 kg portions. A weighed amount of senescent plantain puree was mixed with a weighed amount of flour depending on the sample. Every 1.0 kg portion of batter was mixed with 50 g onion powder, 4.0 g African pepper, 0.5 g calabash nutmeg, 15 g cayenne pepper powder and 15 g ginger powder. Unrefined palm oil (100 mL) was added to the mixture and stirred with a wooden spatula to form a homogenous mixture. The batter was transferred into a greased aluminium loaf pan (305 × 105 × 70 mm), and baked in a preheated Ariston electric oven (C522E EX, Fabriano, Italy) at 170°C for 90 to 110 min (Figure 1).
Physicochemical analysis of ofam batter and baked ofam
Moisture content of ofam batter
The moisture content of ofam batter was determined by drying 2 g of samples at 105°C for 6 h (AOAC method 925.10).
pH of batter and total soluble solids
A measured amount (10 g) of the batter was mixed with 100 mL of distilled water and held for at least 30 min at room temperature and then filtered. The filtrate was used to determine the pH using pH meter (Corning 240, New York 14831, USA) and the °Brix of the samples using a hand-held refractometer (r2 mini, Reichert Inc., Japan) (Kirk and Sawyer, 1991).
Batter viscosity
Batter viscosity was measured using a Brookfield RVDV-2T Viscometer (Brookfield Engineering Laboratories, Middleboro, MA, USA), with the guard leg detached. Viscosity was measured using 220 ± 1 g of ofam batter in a 250 mL glass beaker at ambient temperature (27 ± 2°C). In determining the viscosity of the batter, a flow profile was obtained (at different spindle speeds of 40 rpm, 60 rpm and 80 rpm for a period of 30 min for each speed) as proposed by Dikeman and Fahey (2006), Reppas et al. (1999) and Schemann and Ehrlein (1986)for non-Newtonian fluids. The viscometer was set to measure viscosity every 5 min, and the average speed was calculated for each spindle speed. A 07-spindle size was used for the study and three measurements were taken for each batter sample.
Texture profile analysis of ofam
Texture profile analysis (TPA) of baked ofam samples were evaluated by the method described by Agrahar?Murugkar et al. (2016)with slight modifications, using the Stable Micro Systems texture analyser (TA-XT plus - 13051, Surrey, UK). A two-bite compression test was performed on samples of height 30 mm after a size 15 cork borer (22.5 mm outside diameter) was used to obtain cylindrical-shaped samples from the baked product. The analysis was done at a test speed of 5 mm/s, pre-test speed of 1 mm/s, post-test speed of 5 mm/s and a deformation of 75% using an aluminium cylindrical probe of 75 mm diameter. Data acquisition rate was at 200 pps. Using the exponent software, the measurements for hardness, fracturability, adhesiveness, springiness, cohesiveness, gumminess, chewiness and resilience were obtained. 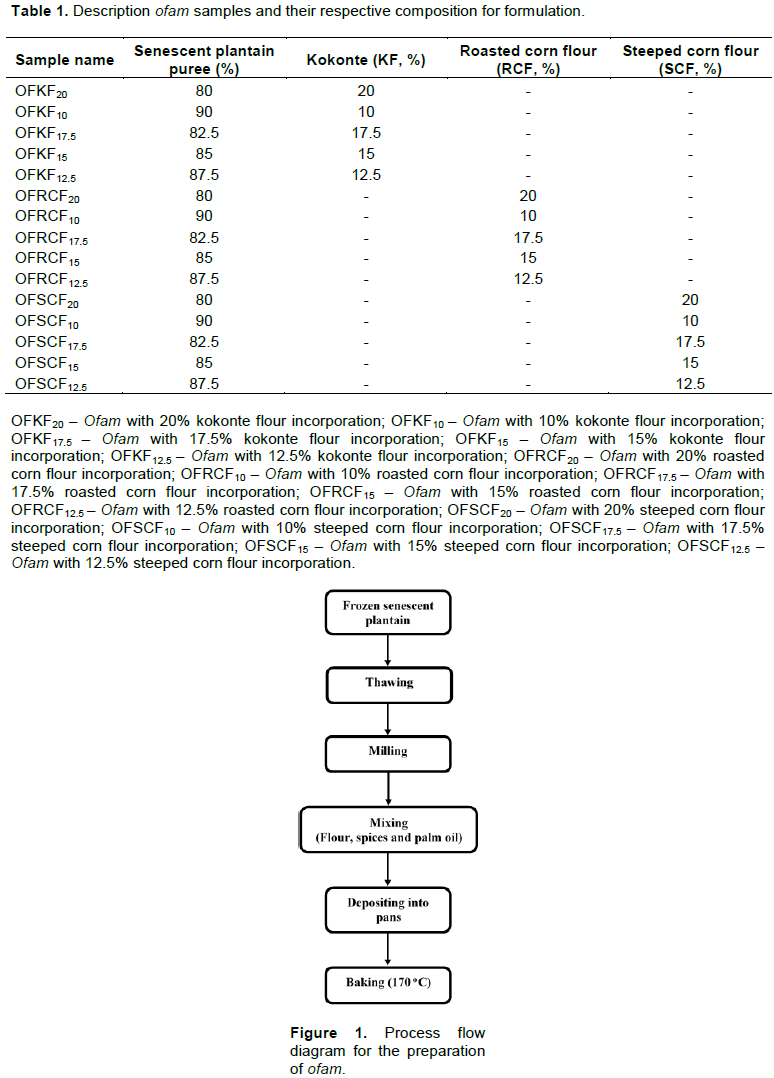 Colour analysis of batter and ofam
The colours of ofam batters and baked ofam samples were measured by a CR-300 Chromameter (Konica Minolta CR series, NJ 07446, USA). The CIE L, a, b colour system was used to measure the colour (MacDougall, 2010). Measurements were taken in triplicate and their mean values were used to represent the colour values of the samples. The total colour difference ( ) for each baked sample was calculated using the colour of their respective batters as a reference point. The values for the Browning index, Chroma and the Hue angle of the batter and ofam were then calculated using the following expression:
Consumer acceptance test
Fifty untrained panellists participated in this study. They were made up of students and staff at the Food Research Institute (FRI) of the Council for Scientific and Industrial Research (CSIR). The evaluation   was   carried   out    in   CSIR-FRI designated sensory laboratory which conforms to ISO 8589 standard. The criteria for recruitment were as follows:
(a) The panellists were older than 18 years;
(b) They were non-smokers;
(c) They had no allergies to any of the ingredients used in the preparation of ofam (that is, plantain, onion, ginger cayenne pepper, calabash nutmeg, African pepper, kokonte, steeped corn flour and roasted corn flour);
(d) They were willing and available to participate in the study.
Panellists were presented with three-digit coded samples. The codes were generated using XLSTATS version 2014 following a randomised design matrix. They were also served with plain crackers (unsalted) for palette cleansing and water to rinse their mouths in between samples. Each panellist evaluated 5 samples per day for appearance, external or crust colour, internal crumb colour, aroma, oiliness, hardness, stickiness, smoothness, sweetness, spiciness, flavour and overall acceptability on a 9-point Hedonic scale (1 represents dislike extremely, 5 represents neither like nor dislike, 9 represents like extremely) (Stone and Sidel, 2004).
Data analysis
Data were subjected to analysis of variance (ANOVA) using Statgraphics (Centurion XVI). Significantly different means were separated using Duncan’s Multiple Range Test (DMRT) 5% significance level. Principal component analysis (PCA) was use to visualise the effect of flour types and concentrations on the sensory attributes of ofam. Graphical representation was by Microsoft Excel.

The physicochemical characteristics of the ofam batter and baked ofam such as moisture, pH, Total Soluble Solids (TSS), L-value, viscosity, hardness and fracturability were influenced by both flour type and flour concentration. The type of flour used in the batter formulation influenced the ofam colour. Generally, the RCF batter was the most viscose and its ofam was the hardest. All the fifteen samples evaluated had their unique sensory differences. The RCF ofam was the most preferred by the panellist and KF was the least preferred. The sensory panellists generally preferred ofam with 15% incorporation. This would form the basis for the formulation of ofam powder mix. The different flour types influenced the sensory characteristics of the products differently. Further studies on the sensory acceptability of ofam containing high fibre flours need to be investigated to enhance the nutritional quality of the product.

The authors thank Prof. Benjamin Kofi Simpson of McGill University, Department of Food Science and Agricultural Chemistry, for his direction and contributions.