Bullying and victimization remains a persistent phenomenon in schools within the United States of America. However, no studies have focused on bullying and victimization among deaf students. This cross-sectional study was conducted to determine the frequency of bullying and victimization among deaf children. Further, the study examined deaf children who could read and write at their respective grade levels or higher. Specifically, the possibility of these children experiencing distress linked to bullying and victimization was investigated, and whether the same level of distress varied steadily across grade levels. The study was conducted at eight U.S. residential schools for the deaf using the Reynolds Bully Victimization Scales for Schools. Twenty-one males and fifteen females participated in the study. Participants were sampled based on their reading and writing skills at fourth or fifth grade and above. There were 35 participants from 10th to 12th grade. Participants in 10th grade reported a significantly higher occurrence of bullying than those in 12th grade. Taken together, these findings indicated a strong correlation between victimization and total cases of distress, bullying, and levels of externalizing distress, as well as between victimization and the intensity of internalizing distress.

Participants
At the time of the study, 48 residential schools for the deaf were still operating within the U. S. Students resided at the schools Monday to Friday and went home on the weekends. To  recruit  participants, the researchers contacted 24 of these schools on the East Coast, in the Midwest, and the South. In agreement with the administrators of the schools, the researchers were permitted to conduct the study, but the school names and exact locations were not to be identified in this report. Initially, 69 students were recruited to participate in the study, but only 35 met the eligibility criteria. Participants included male and female students, aged 15 to 21 years (M=15.22, SD=3.45), who were required to have at least 4th or 5th grade reading and writing abilities. Of these students, 15 were in 10th grade (n = 15), 13 were in 11th grade (n = 13), and 7 students were in 12th grade (n = 7).
Within this group, 51.2% of the participants or their parents/guardians (if below 18 years old) identified themselves as White, 43% African-American, 4.1% Asian (includes South Asian), 1.0% Hispanic, 0.2% Middle Eastern, 0.2% Native American, and 0.2% other/ declined to answer. Additionally, the majority of the students (76.9%) were in 12th grade. Table 1 gives a breakdown of participants by grade level. 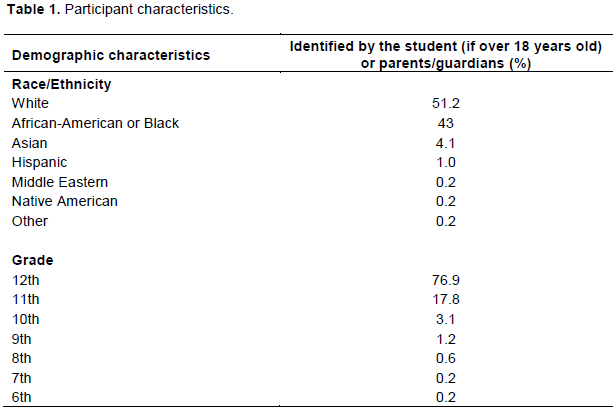 It was hypothesized that a higher prevalence of bullying would be found among 10th graders as compared to their 12th grade counterparts. There was no significant difference in the prevalence of victimization between 10th, 11th, and 12th grade students. However, it was discovered that 4.6% (n = 3) of the study participants were bullies, based on the results of the BVS scores which ranked them in the Moderately Severe range; 8.6% were victims (n = 3); and 2% of them (n = 1) were discovered to be bully-victims.
The study also investigated distress experiences among participants to establish if they varied systematically across the 10th, 11th, and 12th grades. It was postulated that 12th graders would experience lower levels of distress compared to students from other grades. However, no influence from grade level was found on the overall internalizing or externalizing levels of distress related to victimization. Based on the results, it was apparent that our sample had not experienced as many social life disruptions throughout elementary and middle school transitions as educators had feared. Additionally, our results appeared to support those findings delivered by other special education researchers related to bullying (Blake et al., 2014), suggesting that youths living with special needs may have resilient qualities that help them endure transitions between grade levels.

The RVBS measured bullying behavior and victimization among peers in schools for the deaf. In this study, we used the BVS and BVDS; the School Violence Anxiety Scale, also part of the RVBS, was not used. Despite the limited data, school violence does not appear to be an issue in schools for the deaf. However, bully-victim situations are frequently discussed among educators of deaf students (Bat-Chava, 2000). The BVS measures a range of bullying behaviors, including those that are symptomatic of overt peer pressure, harassment, and aggression. The BVDS consists of the Internalizing Distress Scale and the Externalizing Distress Scale and provides a BVDS total scale score. These scales were used to appraise the level of psychological distress specific to individuals being bullied.
This project was approved by the appropriate university institutional review board. The data was gathered in Fall 2017, Spring 2018, and Summer 2018. The researchers contacted 24 schools. The schools were selected based on the researchers’ ease of transportation as this project was not grant funded. Therefore, the researchers used personal funds to avoid delaying the project by waiting one or two years to re-apply for grants. Many schools were  unable  to  accommodate  the  researchers  due  to their reaccreditation experience, reduction in the school’s budget that promoted the absence of students with 4th or 5th grade reading and writing skills, having interim administrators, and lack of interest in research.
The schools for the deaf expressed to the researchers that they would prefer “tried and true” solutions to bullying rather than research with an unfamiliar assessment, and they are facing the unfortunate reality of the residential school being on the brink of closure by the state. Depending on their reading fluency, students required between 45 minutes and 1 hour to terminate the assessment instruments. The researchers completed the review of all parental consent forms for students under age 18, referrals of bullying or bully-victimization school records approved for release by the school’s administration, and instructions for the assessment instruments. Once the data was entered in SPSS, the .80 criterion was used in assessing inter-rater reliability. The inter-rater reliability was excellent.
Other factors not included in the research
Both researchers are deaf and fluent in American Sign Language (ASL). After each testing session, participants were informed that they were free to ask questions or express any concerns after the testing. In schools that did not have school counselors fluent in ASL, or no school counselor (some schools had a behavior specialist, an advocate, or a family and school social worker instead of a school counselor), students expressed that they had many emotional scars from previous grades or previous schools. Further, several students transferred to the residential school for the deaf from a mainstream school. These students expressed great sadness, anger, and disappointment with their former mainstream schools, demonstrating that they had been holding onto these emotions for years with few outlets to express themselves and move forward. Students who joined residential schools starting in elementary or middle school indicated the presence of bullying during middle school years, much more than they experienced in high school. Another factor was that students felt bullied by classroom teachers who were either hearing and believed in SIM-Com (speaking and signing at the same time), or native ASL users from well-known deaf families in their communities insensitive to the students’ lack of near-native ASL skills. The students reported these two factors as stressors.

This study had several limitations. The small sample size (N = 35) raises a question about the degree to which the results can be generalized to all students with the same characteristics in other residential schools  for  the deaf in the same state and other ones nearby. Additionally, a relatively equal number of 10th and 11th graders and a smaller number of 12th graders participated in the study; therefore, the results from the 12th-grade sample should be interpreted with caution. If this stratified random sample had been implemented across grade levels, the inclusion of an equal number of students from each grade may have resulted in a more balanced representation. However, a stratified random sample would have been difficult to implement given the small population of students with special needs considered in the study. Additionally, not all parents permitted their children to participate in the study.
Another significant limitation is the narrow construct of the Reynolds BVS and BVDS within the context of this study. For example, cyber-bullying was not accessed from the BVS; thus, the data provided was inconclusive. It is possible that some students cyber-bullied others or were bullied and experienced victimization resulting from cyberbullying, but such information was neither solicited nor reported in the study. Additionally, the questions on the BVDS only explicitly ask about distress related to victimization, not bullying. Further, it was possible that the self-stated bullies could have been distressed at higher levels than they reported through the BVDS.

IMPLICATIONS OF THE STUDY

In addressing problems related to bullying and victimization, it is important to use preventive measures and interventions to help promote and restore mental and emotional health. If bullying and victimization cases increase, personnel from every school should deliberate on implementing or re-implementing school-wide bullying prevention programs such as the Olweus Bullying Prevention Program (2003). In the study of deafness, previous studies have been conducted on the OBPP which have contributed to its status as a “model program,” and part of the violence prevention initiatives as reinforced by the Department of Justice (Olweus and Limber, 2003). The San Francisco based non-profit program, No Bully (developed in 2009) or Izzy Kalman’s Bullies to Buddies (2010), are other programs applicable in anti-bullying efforts.
If the results obtained from school screening indicated relatively low bullying and victimization rates, it would become unnecessary to establish other large-scale bullying programs. Current research, including this study, shows a strong association between internalizing distress and cases of victimization in addition to externalizing and bullying distress (Carter and Spencer, 2006; Taylor et al., 2010; Rivers and Smith, 1994; Vernberg et al., 2011; Zhang et al., 2016; Olweus and Limber, 2003). Administrators have a responsibility to take action as an essential measure upon suspicion of students being victimized or acting as  bullies  (Rigby,  1995).  Individual counseling or group psycho-educational counseling should be given to such students, while social skills training would be effective once they focus on bullying avoidance behaviors and a coping mechanism to manage the negative impacts of bullying.

It is recommended that other researchers conduct studies like this one, considering the benefits to society they would offer by providing further evidence of using bullying and victimization assessment tools to identify potential bullies and victims. Further, it may be of help for educators to remain conscious of the effects of victimization among children with special needs. It is recommended, however, that future researchers modify their procedures when conducting similar studies. Finally, the addition of a hearing comparison group maybe of greater benefit than making direct comparisons among individuals in the same age group and population.