Hawthorn (Crataegus pinnatifida Bge.) flavonoids constituents have recently received greater attention for their health and medical properties. In order to relgulate the  flavonoids constituents, one-year-old hawthorn plants were subjected to foliar application of L-glutamic acid (GLA, 800 mg L–1 ), glycine (GLY, 20 mg L–1), L-phenylalanine (PHE, 20 mg L–1), L-arginine (ARG, 20 mg L–1). The levels of rhamnosylvitexin, rutin and hyperoside in both leaves and root exudates were significantly (p<0.05) increased in GLA and PHE treatments. Application of GLY and PHE increased the levels of rutin and hyperoside in hawthorn roots, especially for PHE treatment, and the level of hyperoside in PHE treatment was significantly (p<0.05) higher than in other treatments. No positive effects were observed for quercetin under exogenous amino acids treatments in both leaves and roots. The total flavonoids content of leaves, roots and root exudates under GLA and PHE treatments were significantly increased compared to the control. In addition, the phenylalanine ammonia-lyase (PAL, EC 4.3.1.5) activities of leaves and roots were also increased. These results suggest that some exogenous amino acids did affect the flavonoids content, which may have significance in regulation of flavonoids in hawthorn.
Key words: Amino acids, flavonoids, phenylalanine ammonia-lyase.

Amino acids are the precursor substances that are modified by a wide range of different enzymes to produce secondary metabolites such as flavonoids, alkaloids and other nitrogen compounds. The chemical structure and composition of secondary metabolites are closely related to environmental conditions (Yan et al., 2007). Each amino acid plays a very important role in the synthesis of secondary metabolites.
It is reported that plants can not only absorb inorganic nitrogen, but can absorb and utilize the amino acids directly (Yin, 1999; Liu et al., 2004). The various roles of amino acids in relation to crop growth have been studied extensively (Yin, 1999; Yang et al., 2005). In tobacco cultivation, regulation of secondary metabolic pathways was one of the methods used in order to improve tobacco quality. Yin (1999) has found that appropriately higher amino acids content in tobacco can improve quality and flavor. These are examples of amino acids being utilized to improve secondary metabolic pathways and synthesis efficiency.
Hawthorn (Crataegus pinnatifida Bge.) is a good source of flavonoids. The phytoactive secondary compounds present in hawthorn leaves, fruits, and roots are flavonol derivatives and flavonoids (Chang et al., 2001; Kurkina, 2015). The primary flavonoids present in hawthorn include rhamnosidevitexin, vitexin, quercetin, hyperoside, and rutin (Kurkina, 2015). These secondary metabolites synthesized in hawthorn have recently received more attention, especially due to their vasoactive and anti-inflammatory properties (Li et al., 2010; Kurkina, 2015). Many flavonoids contained in hawthorn demonstrate antioxidant activity and have positive effect on hypertension and cardiovascular diseases (Kirakosyan et al., 2003; Li et al., 2010). In recent years, the flavonoid constituents in hawthorn have been used in a wide range of developments and applications. However, research on flavonoids with regard to secondary metabolite regulation is less addressed. Despite a few of reports on the medicinal aspects and growth regulator effects (Kirakosyan et al., 2004; Su et al., 2015), and photosynthesis, fluorescence, and nitrogen metabolism (Lv et al., 2009; Yu et al., 2010) in hawthorn, there is little information available regarding the effects of exogenous amino acids on the production of flavonoids in Crataegus. The objective of the present study is to determine whether the levels of flavonoids present in one-year-old plants of hawthorn can be increased by the application of exogenous amino acids.

Experimental materials
The materials were obtained from one-year-old root suckers of hawthorn (Crataegus pinnatifida Bge.), planted in plastic pots (with top diameter and height 12.5 and 13.0 cm, respectively) filled with a mixture of garden soil, slag and well-rotted manure (2:1:1 v/v/v) in early May 2007. Randomly selected plants with fully expanded leaves and conventional fertilizer and water management were subjected to exogenous amino acids treatments in the morning on August 12, 2007. Before treatment, the plastic pots were cut open and the soil around the roots was washed off with gentle water spray; final rinsed with distilled water. As every care was taken, this procedure facilitated the removal of soil without injuring the roots. An individual plant was placed in a 1.5 L opaque plastic pot with 1.0 L of half-strength Hoagland nutrition solution for one week. The solution was aerated and replaced twice a week. 10 mL glutamic acid (GLA) 800 mg L–1, glycine (GLY) 20 mg L–1, L-phenylalanine (PHE) 20 mg L–1, L-arginine (ARG) 20 mg L–1, and distilled water as a control were sprayed on the leaves without surfactant once every two days on August 19 to 23, 2007. Twelve plants of each treatment were treated 15 days. During the treatments, the solutions were aerated and replaced one times every three days.
Extract of flavonoids in leaves and roots
1.0 g of frozen roots was weighted and flavonoid compounds were extracted with 30 mL 70% ethanol on an ultrasonic bath (225W) for 30 min at 40°C. After decompression filter, extracts were transferred to 50 ml volumetric flask using 70% ethanol to volume. The extract was filtered with 0.45 μm millipore filter. The final extract was prepared just before the experiments so as to prevent any undesired degradation reactions.
Collection of root exudates
Twelve plants from each treatment after treatments 15 days were placed into 1.0 L of deionized water to collect root exudates. The root exudates of each treatment were collected once every three days, and four times were collected during the plants growth period. The root exudates solution was immediately filtered through buchner funnel, and absorbent cotton to remove root detritus and microbial cell debris, and then resin column with D101 macropore polymeric adsorbent, and then eluted sequentially with 250 mL of 70% ethanol, flow rate of 2 BV h–1. The final collection was lyophilized (FreezZone 12, LABCONCO) to 10 mL and filtered through a 0.45 μm membrane filter, and then stored at -20°C for HPLC (high-performance liquid chromatography) analysis. After finishing the treatments, the root fresh samples were obtained and instantly frozen in liquid N for 1 min, then stored at -80°C for measurement of enzyme activity, total flavonoids and protein content.
HPLC analysis of extracts
The following conditions were used for HPLC analysis: a Agilent ZORBAX Extend column (5 µm pore size, C-18, 250 mm×4.60 mm), flow rate of 1.0 mL min–1; solvent A (acetonitrile), solvent B (0.5% phosphoric acid); the HPLC running conditions was in Table 1; the oven temperature was 25°C. 10 µL samples were injected onto a Shimadzu 10 AD HPLC system with a SPDM-10AV photodiode array detector (Shimadzu Scientific Instruments Inc., Columbia, MD, USA). The quantitative analysis of each compound in the extracts was analyzed by comparison with the corresponding reference samples. Detection was set at 345 nm. A HPLC profile of reference substances was shown in Figure 1. Retention time and regression equation of flavonoids were shown in Tables 2 and 3. 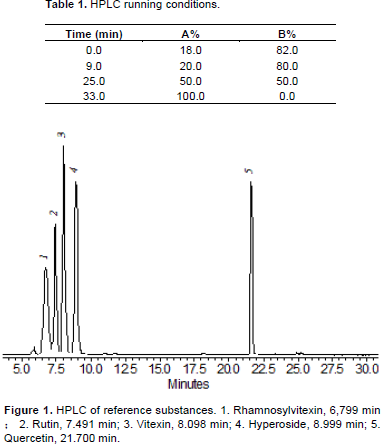 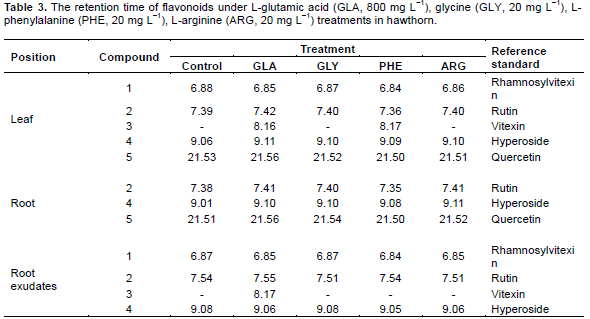 Comparable retention times were obtained for rhamnosylvitexin (6.80 min) and compound 1 (6.84-6.88 min), rutin (7.49 min) and compound 2 (7.35-7.56 min), vitexin (8.10 min) and compound 3 (8.13-8.17 min), hyperoside (9.00 min) and compound 4 (9.01–9.15 min), quercetin (21.70 min) and compound 5 (21.49-21.61 min), and the identity of the paired compounds was supported by on-line diode array spectroscopy.
Total flavonoids assay
Total flavonoid content was measured by the aluminum chloride colorimetric assay (Jia et al., 1999). 1.0 mL of extracts or standard solution of catechin (20, 40, 60, 80 and 100 mg L–1) was added to 10 mL volumetric flask containing 4 mL of ddH2O, and then 0.3 mL 5% NaNO2 was added. After 5 min, 0.3 mL 10 % AlCl3 was added. After 6 min, 2 mL 1 M NaOH was added and the total volume was made up to 10 mL with ddH2O. The solution was mixed well and the absorbance was measured against prepared reagent blank at 510 nm. Total flavonoid content of samples was expressed as mg catechin equivalents (CE) per fresh weight.
Activity of enzyme assay
The activity of phenylalanine ammonia-lyase (PAL, EC 4.3.1.5) was determined according to the procedure of Zucker (1965) with modifications. Frozen roots (0.5 g) were extracted with a blade homogenizer in 3 mL 0.1 M Tris-HC1, and incubated at room temperature for 1 h. After adding 40 mg conpolyvinylpolypyrrolidone and centrifugating 10 min, the supernatant (1.0 mL) was enzyme extract. 2.5 mL 12 mM L-phenylalanine in 0.1 M Tris-HCI buffer (PH 8.5) was added as substrate to one set of samples containing 0.5 mL enzyme extract. The PAL controls were a second set of samples containing 2.5 mL 0.1 M Tris-HCl without L-phenylalanine. Increase in absorbance due to PAL activity was recorded spectrophotometrically at 290 nm with an LKB Biochrom Ultrospec 4050 spectrophotometer (Cambridge, UK), initially (0 min), and after 60 min of incubation at 30 °C. Concentrations of (E)-cinnamic acid were calculated by applying the Beer-Lambert law.
Data analysis
Results were analyzed by SPSS (17.0 for Windows, Chicago, IL, USA). Effects of exogenous amino acids were analyzed using a one-way ANOVA. When significant according to the ANOVA, the comparisons between treatments were conducted with Duncan’s multiple range test for mean significances (p < 0.05). 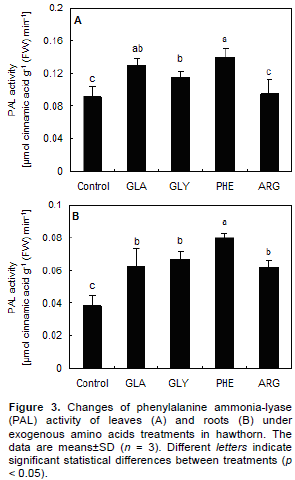 Flavonoids are polyphenolic compounds synthesized via the shikimate and phenylpropanoid pathways (Harborne, 1988). In plants, the released flavonoids can have multifunctional roles, such as protect plants against pests and diseases (Dakora, 2003; Boudkhili et al., 2015), regulate root growth and functions (Karimov and Botirov, 2015), influence nutrient cycles such as N cycle (Cesco et al., 2012), and induce allelopathic effects (Chaves et al., 2001). Although flavonoids play a dominant role in controlling some of plant–soil interactions, there is few study on their origin, composition, and regulations in the plants (Kim et al., 2010).
Usually, the precursor compounds for flavonoid secondary metabolites, such as shikimic acid, amino acids and acetic acid, come from the primary metabolism (Kirakosyan et al., 2004; Yang et al., 2005). Amino acids undergo enzymatic reaction to generate a-ketoglutarate which can through a series of conversion into the shikimate and phenylpropanoid pathways of flavonoids metabolism. Wang et al. (2006) pointed out that exogenous GLA can promote anthocyanin accumulation in ‘Fuji’ apple. Our study indicated that exogenous amino acids did affect the flavonoids. PHE and GLA treatments increased the levels of rhamnosylvitexin, rutin and hyperoside of leaves and root exudates in hawthorn (Tables 4 and 5), and PHE and GLY treatments increased the levels of rutin and hyperoside of roots (Table 6). These results were in accordance with the results obtained by Yamamoto (1989), who noticed a stimulating effect of exogenous PHE on the flavonoid content, but differ from the results obtained by Kuzovkina et al. (2001), who reported that the addition of 0.01–1 mM PHE affected neither root growth, nor their flavonoids content. The cause might be the differentiated root tissue on the exogenous precursor of flavonoids and the capacity of these tissues for the autonomous synthesis of sufficient amounts of this amino acid.

Based on the results of the present study, application of PHE and GLA increased the total flavonoids content of leaf, root and root exudates (Figure 2), in addition, the PAL activity (Figure 3) was also accordance with this increase. This suggested that exogenous PHE and GLA treatments may constitute an effective way to up-regulate the levels of flavonoids in leaves, roots and root exudates. The same can be found for antioxidant activity in hawthorn leaves (Kirakosyan et al., 2003). Yu et al. (2010) reported that application of GLA accentuated the positive effects of nitrogen metabolism by regulating the activities of key enzymes involved in nitrogen assimilation and catabolism, and led to the increase of photosynthetic capacity of leaves. According to Markham (1982), about 2% of the C fixed by photosynthesis may be converted into flavonoids and related compounds. Exogenous amino acids treatments may act by diverting photosynthetically fixed carbon from synthesis of primary metabolites (such as cellulose, lignin, lipids, and proteins) to synthesis of flavonoids secondary metabolites. This is the process by which application of exogenous amino acids changes the synthetic ways of secondary metabolites. Thus appropriate amino acids supply is recommended for hawthorn to improve photosynthetic processes and nitrogen metabolism, and indirectly contributes to regulation of secondary metabolisms.