Unopened,   commercially-available,    barrel    aged   and   unaged whiskies produced by Maker’s Mark, Nelson’s Greenbrier, Buffalo Trace, and Heaven Hill were purchased from retail settings at liquor stores in Colorado (Table 1). 50 ml of each product where poured into 50 ml amber sample vials and sealed with no headspace.  Both barrel aged and unaged whiskies were analyzed within three months of the products being transferred from their original bottles as bottled by the manufacturer.  All whisky samples were tested at the %ABV of the purchased product as bottled by the manufacturer.
Immediately prior to analysis, a subset of each whisky product was transferred from its 50 ml amber vial to a 3 mL capped glass vial and was labeled. For each sample, 1 μL was collected in a Hamilton gastight 25 μL syringe with a cemented needle and sampled through the injection port of the gas chromatograph. The samples were then analyzed by an Agilent 7890 GC with an Agilent 5975a triple axis MS detector using helium (Buckeye Welding) as a carrier gas at 0.5 mL/min (Lynman, 2016). Tank pressure was 60 psi.
The mass detector in the analyses used electron impact ionization (EI) with a single hyperbolic quadrupole mass filter. The analysis for whisky ethanol GC was performed on a DB-1301 (wax, 30 m, 0.25 mm internal diameter and 0.25 μm film thickness; Agilent Technologies, Waldbron, Germany). The initial oven temperature was set at 60°C with a solvent delay of 3 min. After the solvent delay, the oven was ramped up to 100°C at a rate of 20°C/min. Once at 100°C, the oven was ramped to 240°C at 5°C/min and held for 10 min followed by cool down. Compounds eluting from the column were collected as a Total Ion Current Chromatogram (TIC). Peaks of interest were evaluated against the NIST library of compounds and recorded for comparisons. In between each sample, the Hamilton gastight syringe was rinsed thoroughly with deionized water. Effort was made to ensure the absence of air bubbles during sampling.
The TIC produced for each whisky sample and the included peaks of interest were labeled according to NIST library comparisons and percent probability. All TICs were saved to the computer in the University of Northern Colorado Analytical Chemistry Lab. 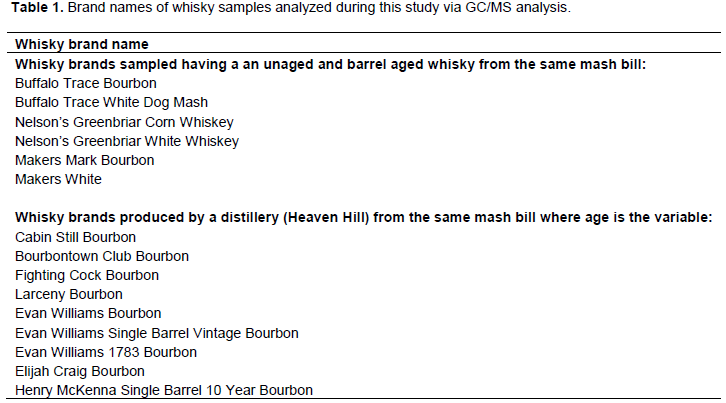 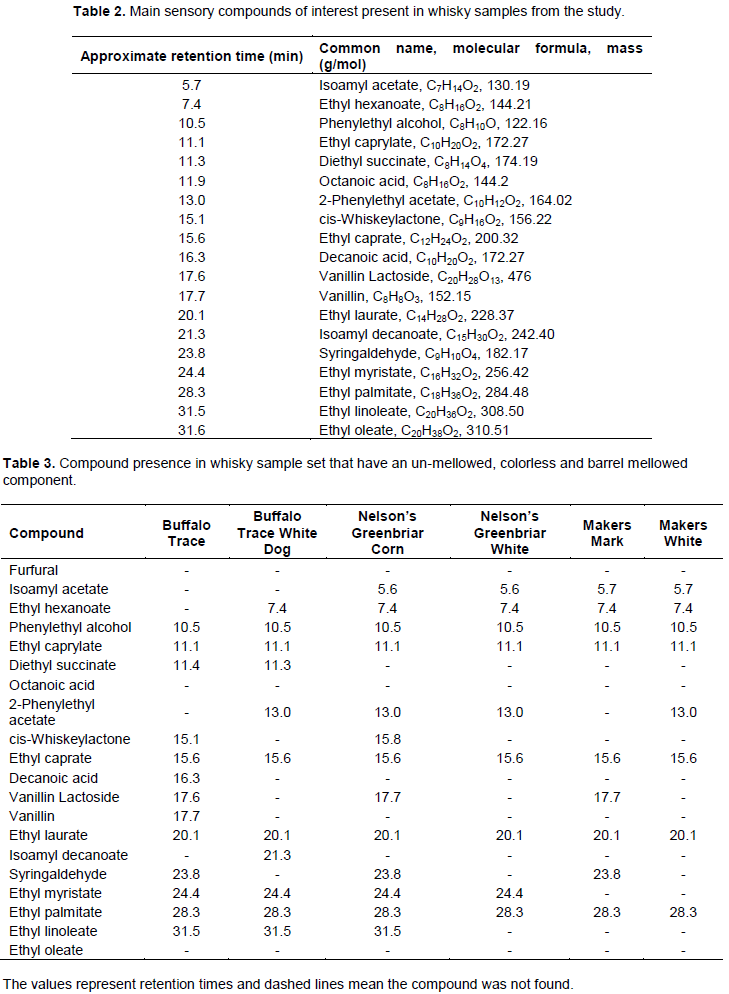 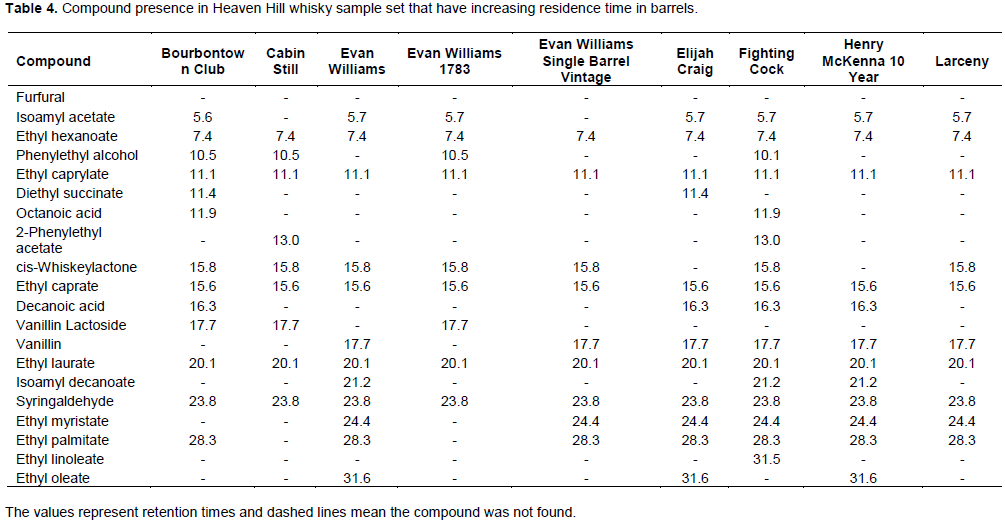 The effect of barrel aging whisky seems to be primarily an additive process in terms of sensory compounds present. In general, barrel aged whiskies contain sensory compounds with higher retention times compared to the sensory compounds found in their colorless, unaged counterparts (Tables 3 and 4).  The sensory compound differences between them are mostly likely present due to contact with oak and the chemical reactions taking place in the barrel during residence time (Mosedale and Puech, 1998; Spedding, 2018). The results of this study are similar to the findings of Owens et al. (2016) (Table 5) and MacNamara et al. (2001) which showed compounds derived from wood were found in samples they analyzed. The colorless, unaged whiskies also lack complexity with regard their sensory profiles (Tables 3 to 5). 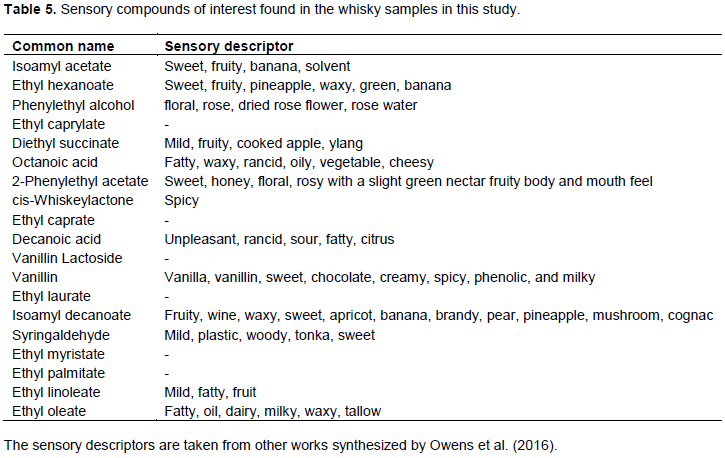 The Heaven Hill whiskies generally show an increase in the number or sensory compounds present as the residence time of the whisky in barrels increased. As the Heaven Hill whiskies all originate from the same grain bill, their sensory compound differences indicate residence time in a barrel is the variable responsible for the differences between younger whiskies and older whiskies.
A common trend when comparing whisky brands with a barrel aged and unaged counterpart is the increase in the number of sensory compounds within the barrel aged versions. A noticeable trend is the presence of syringaldehyde and vanillin lactoside among the barrel aged whiskies and are not present in their unaged counterparts. Thus, it is likely that the presence of these sensory compounds and their sensory contributions is due to barrel aging.
The following compounds were found among both barrel aged whiskies and their unaged counterparts: phenylethyl alcohol, ethyl caprylate, ethyl caprate, ethyl laurate, and ethyl palmitate. These compounds are likely to have been produced during the fermentation process, remain stable throughout distillation, and survive the barrel aging process. Ethyl caprylate and ethyl caprate were the only two compounds found consistently within all the whiskies analyzed in the study; barrel aged and unaged whiskies alike.
Cis-whiskeylactone is found in all the barrel aged whiskies except Maker’s Mark, Elijah Craig, and Henry McKenna. It is possible this particular sensory compound is discriminated against by manufacturers in premium whiskies, such as those listed here, due to its sensory profile being “spicy” (Table 5). However, cis-whiskeylactone is not found in any of the unaged whiskies implying that it is a product of barrel aging.
Not  all  sensory  compounds  have   a   predictable   or intuitive presence among all the whiskies samples. Isoamyl decanoate appears in Buffalo Trace White Dog, but is not seen in its barrel aged counterpart, Buffalo Trace Bourbon (Table 3). It also appears in a few barrel aged whiskies from Heaven Hill, but not all of them (Table 4). Isoamyl decanoate also appears in unaged whisky and in 10-year-old whiskies (Henry McKenna 10 year-the oldest in our study), making it difficult to determine its origin in whisky production. Further refinement of the GC/MS methodology holds great possibility for the detection of compounds not present in this study.